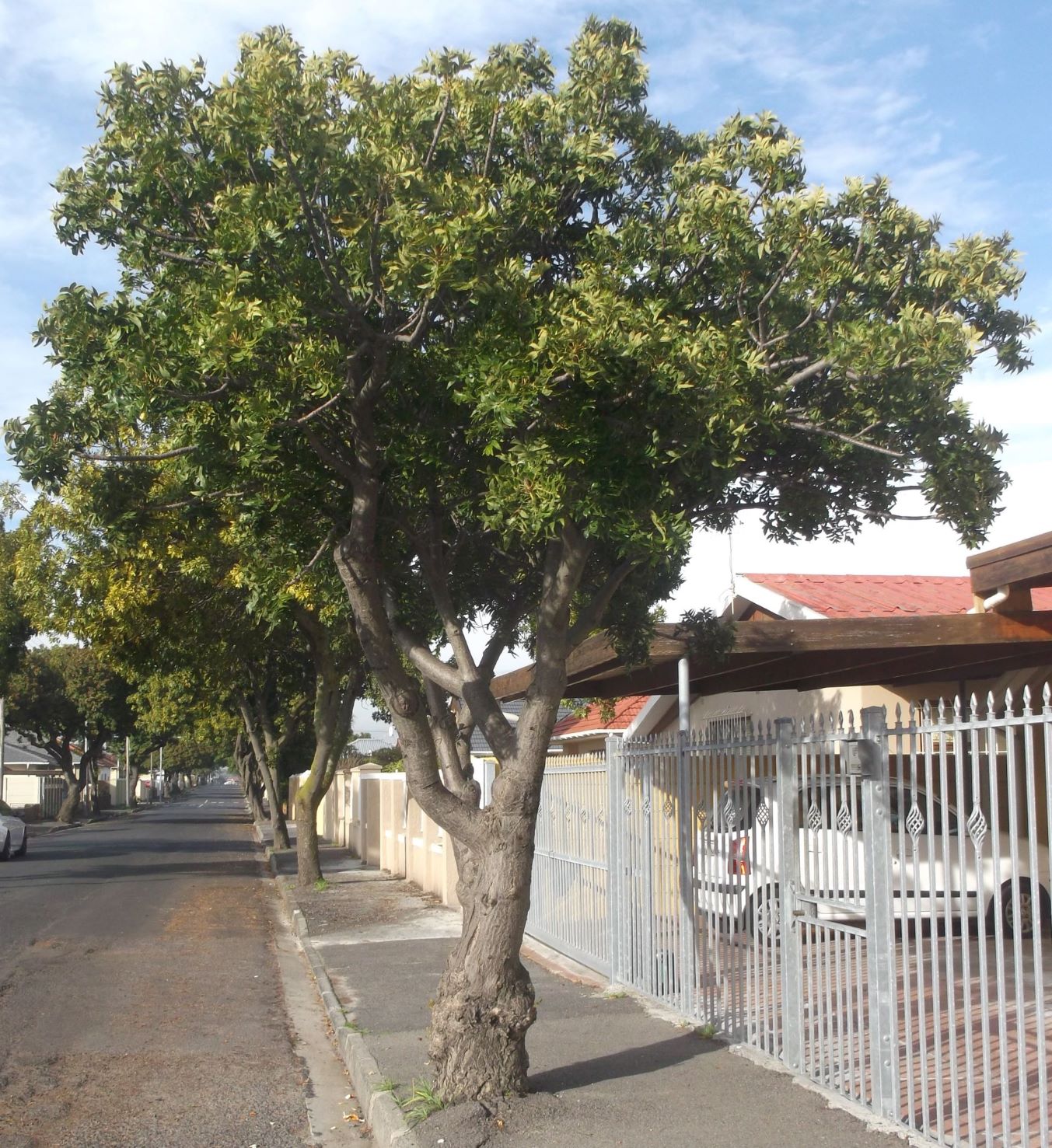 A wild plum tree as a street tree.

The wild plum tree of South Africa makes a very attractive street or garden tree, with its dense green foliage and bright red edible berries in season. They grow wild in riverine forest from the Eastern Cape all the way up to Zimbabwe. Thus my first encounter with the tree was as a child in our garden in Port Elizabeth. We loved climbing up into the twisted gnarled old tree to harvest fresh berries, and the taste stayed with me. It is extremely sour, a little milky, something like green mango, a little tarry, but has a taste of its own that is indescribable. I was delighted to find it planted as a street tree where I live in Goodwood, in Cape Town. It is also one of the most potent anti-oxidant foods in the world (see link at page bottom). This research article shows the anti-oxidant potency of local berries, and I cite them here  from the top down, according to their rating on the anti-oxidant potency composite index: wild plum (225), colpoon (174), wild olive (173), then the trendy western blueberry (146). Following are the christmas berry (106), cross berry (74), waterberry (44) till we finally get to another trendy exotic the cranberry with 38 ! Below that is the tortiose berry (37), bietou (32), num num (27) and humble sour fig (21).

The wild plum tree seems not to be prone to disease. It is also drought hardy, which is probably the reason for it being used in street plantings. In paved areas it tends to be smaller, but it can grow up to 15 meters under the right conditions. Its roots lift the tar on the pavement (sidewalk) about 1 meter around the thick stems of old trees, and give rise to a lot of maintenance work by the city. It should ideally be planted in an unpaved tree bed. 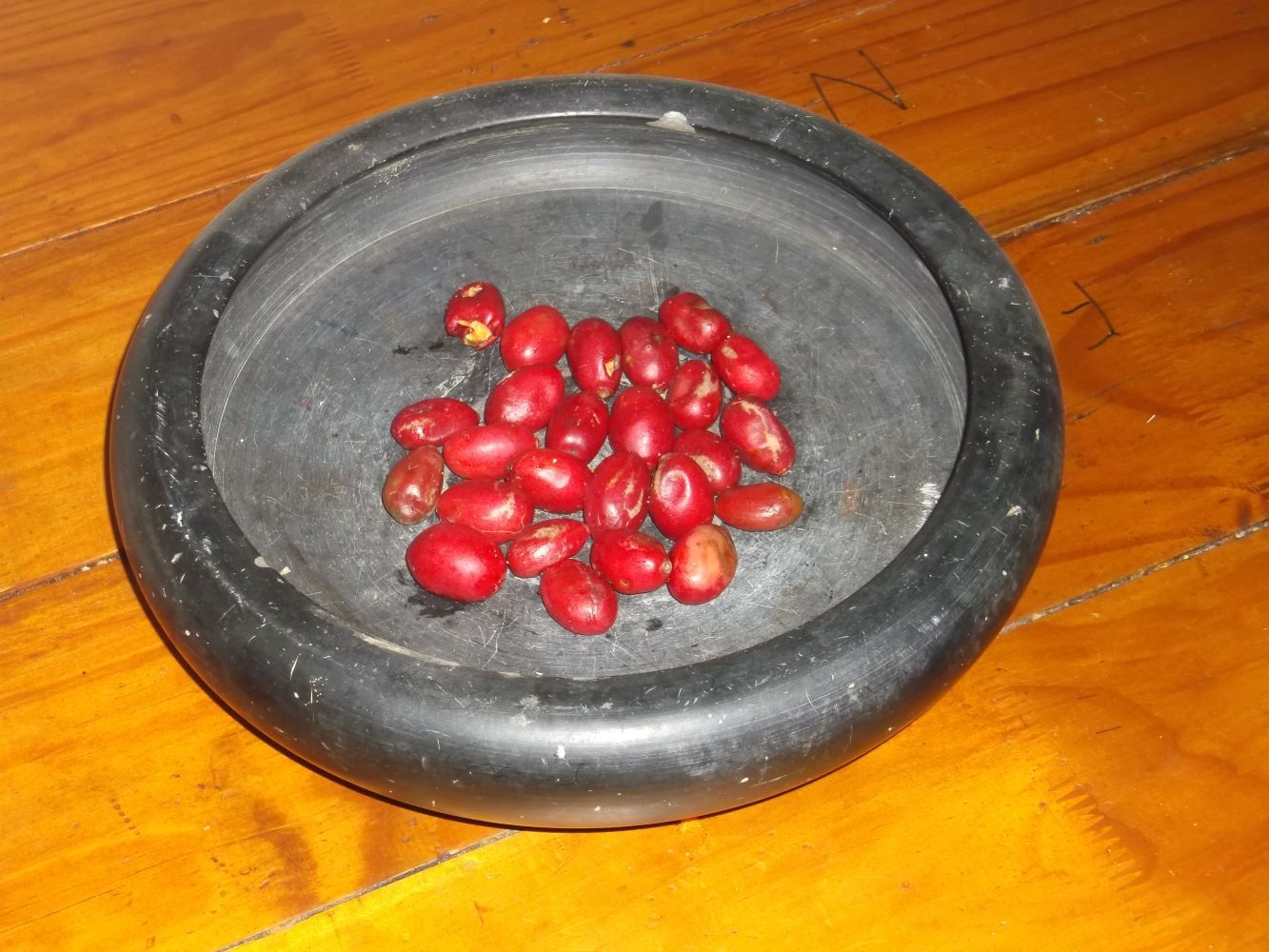 The fruit of the Umgwenyobomvu are incredibly red

The wild plum tree is native to this country and it has many indigenous names, as the fruit were enjoyed for countless centuries before the Europeans came and gave the typical colourless colonial name in the pattern of “wild something-we-know-from-Europe”. There are many examples of this type of naming, even in the naming of animals.

Its indigenous name is Umgwenyabomvu in isiXhosa. Bomvu is an adjectival suffix meaning red, and Umgwenya translates as olive or obstacle. The term 'obstacle' may refer to magical or medicinal properties in traditional indigenous herbalism, as this is a pattern in the naming of medicinal plants, but I don't have clarity on that. Umgwenya is also its name in IsiZulu and isiXhosa, and in Sesotho sa Leboa it is Mothekele or Mmedibibi. 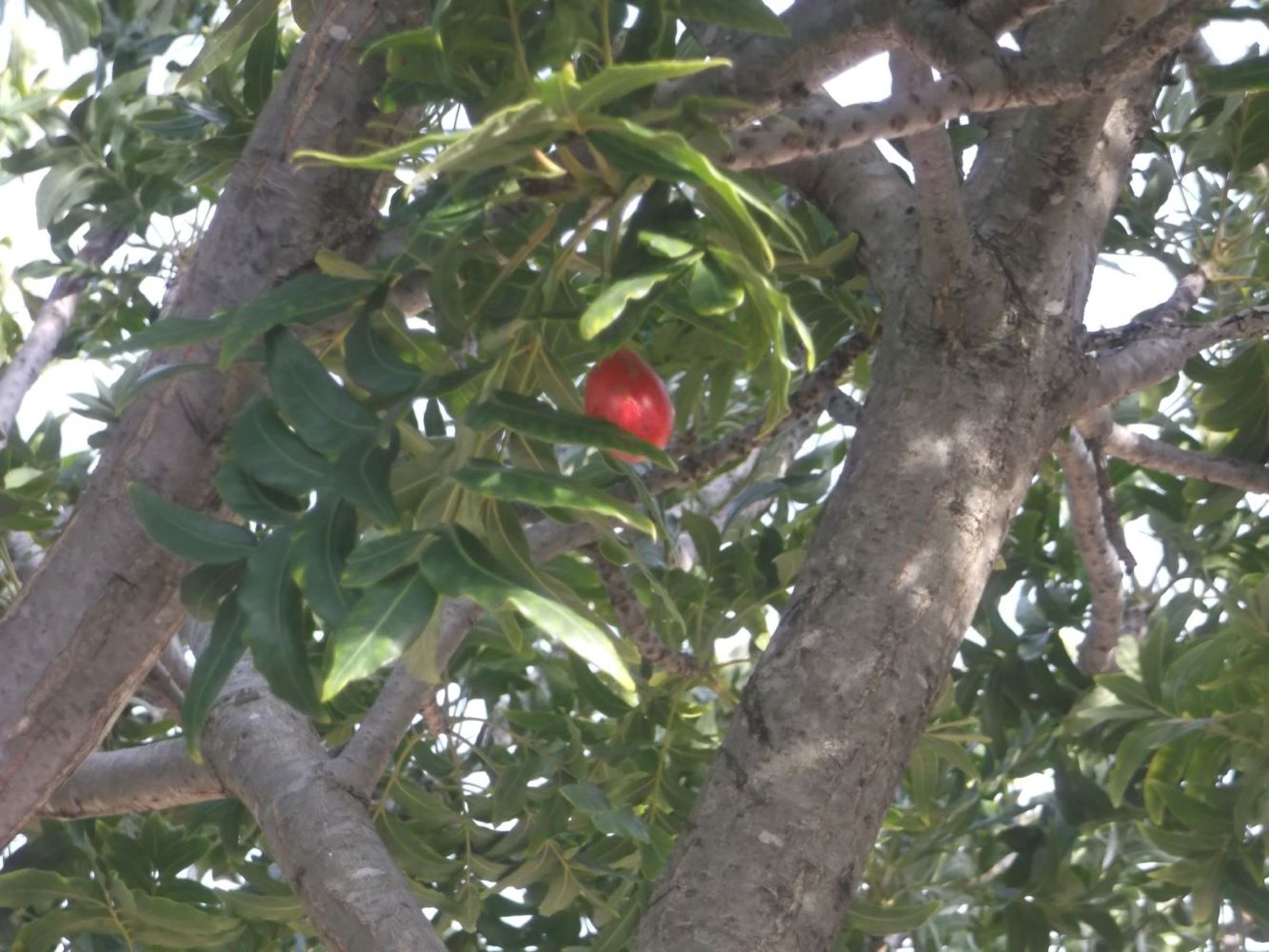 Remembering the sickle-leaf in the Latin name helps with identification, and differentiating it from Ekebergia capensis, to which it bears a striking resemblance. The sickle-leaves and the clustering of the leaves at the end of the branches, help to distinguish Harpephyllum, until it can be recognized instinctively.

Growing the wild plum tree of Southern Africa from seed

The seed is large and hard, and the fruit itself merely a thin skin, 2-3 cm thick, over the seed. Some would call it unrewarding as a fruit, but I have found some use for it in ferments. No longer being given to climbing trees, I must perforce harvest the berries from the ground, where they are often dirty or desiccated. It would be really nice to have one in the garden, which I could train for easy harvesting in a clean state. This led me to cultivating the tree myself. 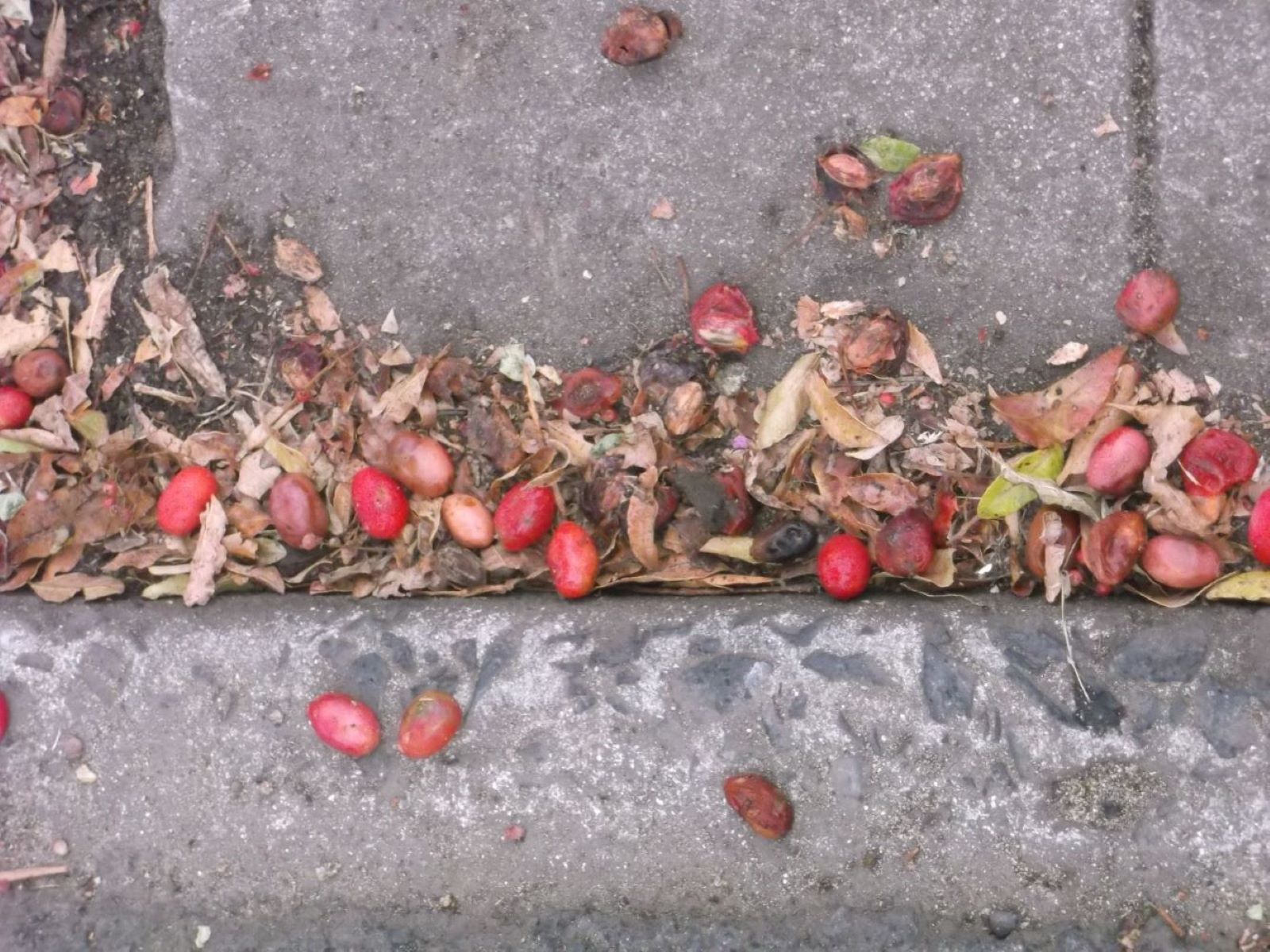 To obtain the fruit, I swept up many of them where they had fallen on the street. These were washed numerous times, and then sorted, and the bad ones set aside. The rest were fermented with a little vinegar and sugar in water, to sanitize them. After the wine was poured off, the fruit were stripped of the seeds and these seeds, with the rotten fruit I'd set aside, were planted. 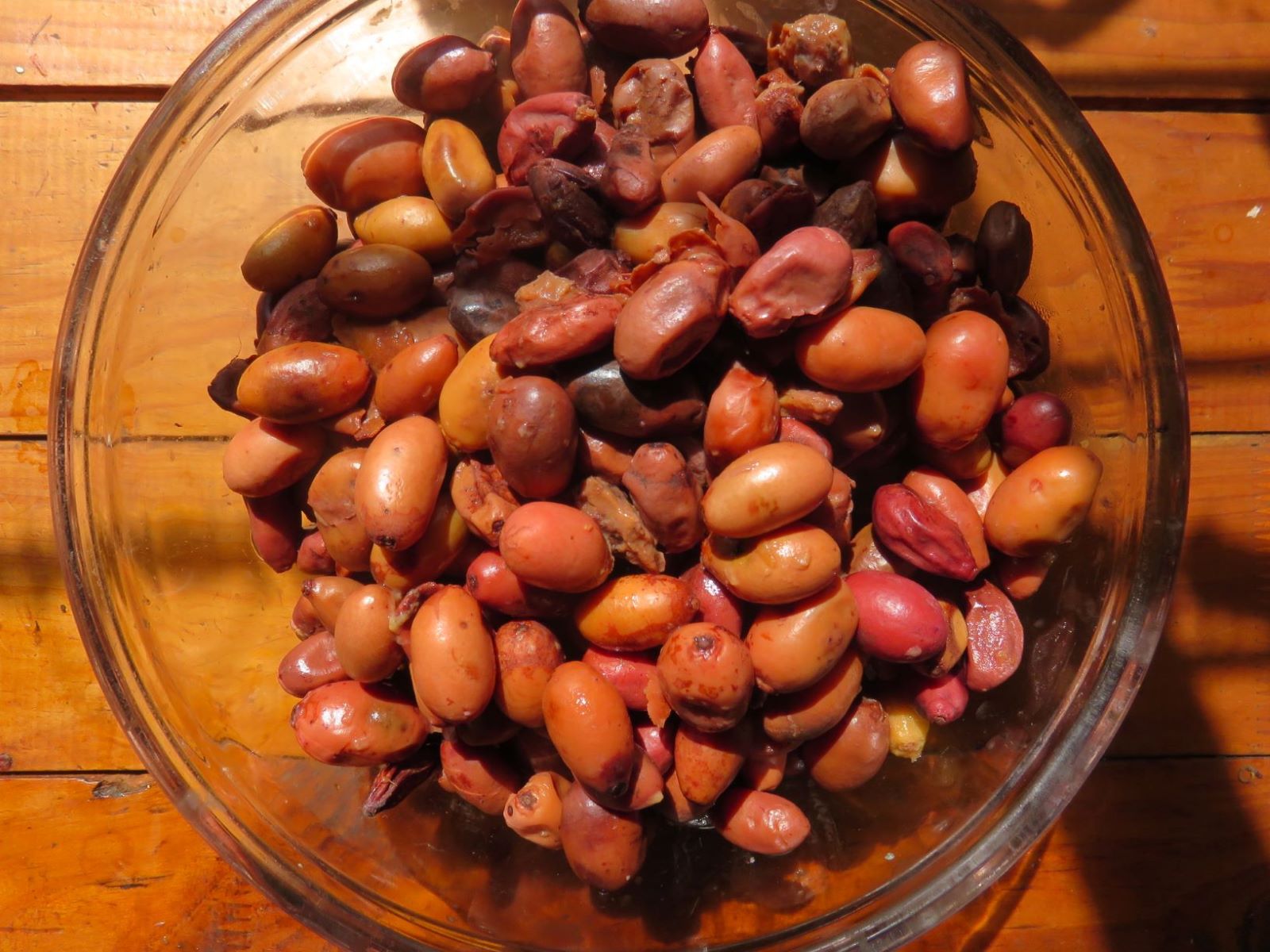 The fruit after fermentation and sorting. Unfortunately that beautiful red is transitory,and destroyed by oxidation and fermentation.

The wild plum tree or Umgwenya is not native to the winter rainfall area of the Cape, but to the lush summer rainfall areas in the east. Perhaps this was the reason it germinated very well in the nursery. After a long wait, taking between 119 and 143 days in spring between August and December, it showed its first glossy sprouts.

Some seeds planted in flats in late September never came up. They would have missed the first few weeks of consistent rain received by the others. Perhaps the seeds should be soaked and roughly cleaned before planting. The successful lot had rain, and they had been fermented in water and were planted with scraps of fermented flesh on them, the second lot were dried, with the flesh on them, if I remember correctly. Many local tree seeds have germination retarders in the flesh of their fruit. 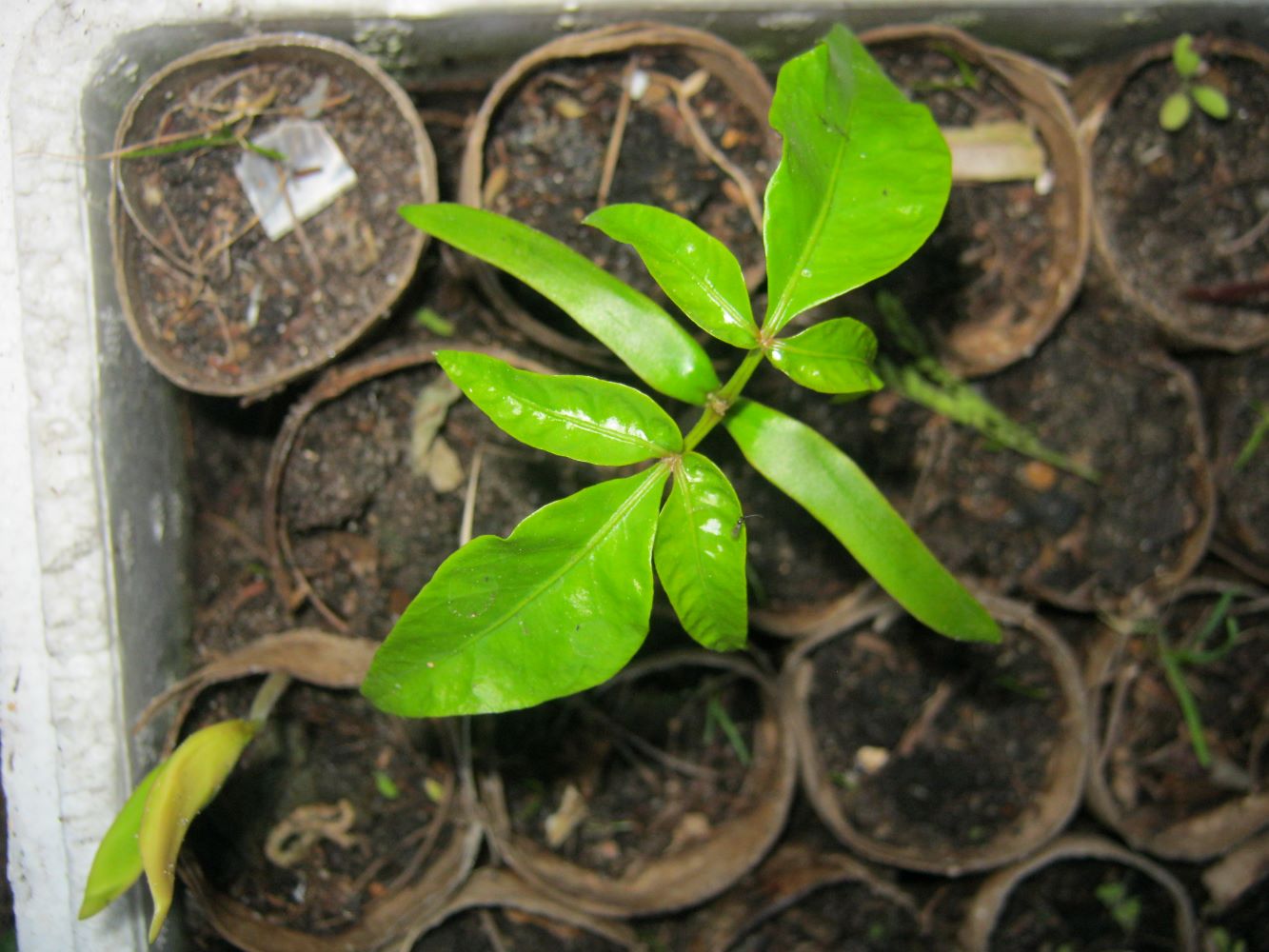 The first seedling emerging from the cardboard tubes.

After such a long wait there was much joy when the first sprouts emerged from the cardboard tubes (toilet roll cores) in which they were planted. My seed mix is usually 3 parts sand to 1 part vermicompost. Worm compost has a special microbiome that protects seedlings from fungal infection, and provides some nutrients, but not enough for long term growth. 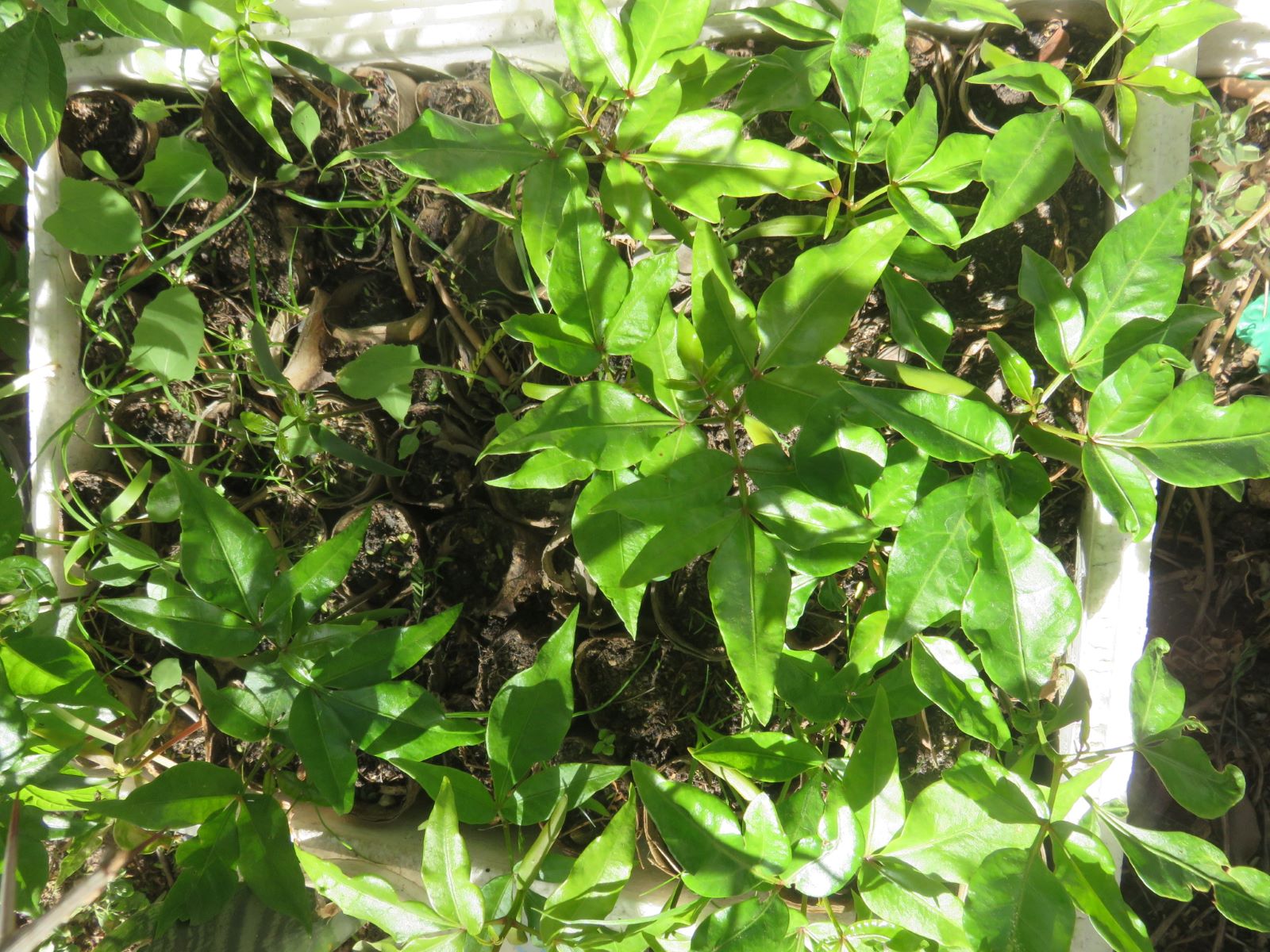 The wild plum germinated pretty well, and are ready to transplant.

When the seedlings had about six leaves they were transferred to recycled planting bags (plastic milk sachets) with more compost in the potting mix. They are still there after a year, as I lost interest in my tree nursery which I had hoped would bring me some profits. Having regained my motivation by starting a perennial food plant collection that holds many native plants, I'm so happy for their hardiness. They have stayed alive and remarkably healthy looking, despite growing larger in those tiny bags. Judging from their undemanding nature with confined root space, they may just make a good potted plant. I hope when I plant them out that the process will have dwarfed them a little as we have a small garden.The more stunted trees in our street also seem to bear more heavily. 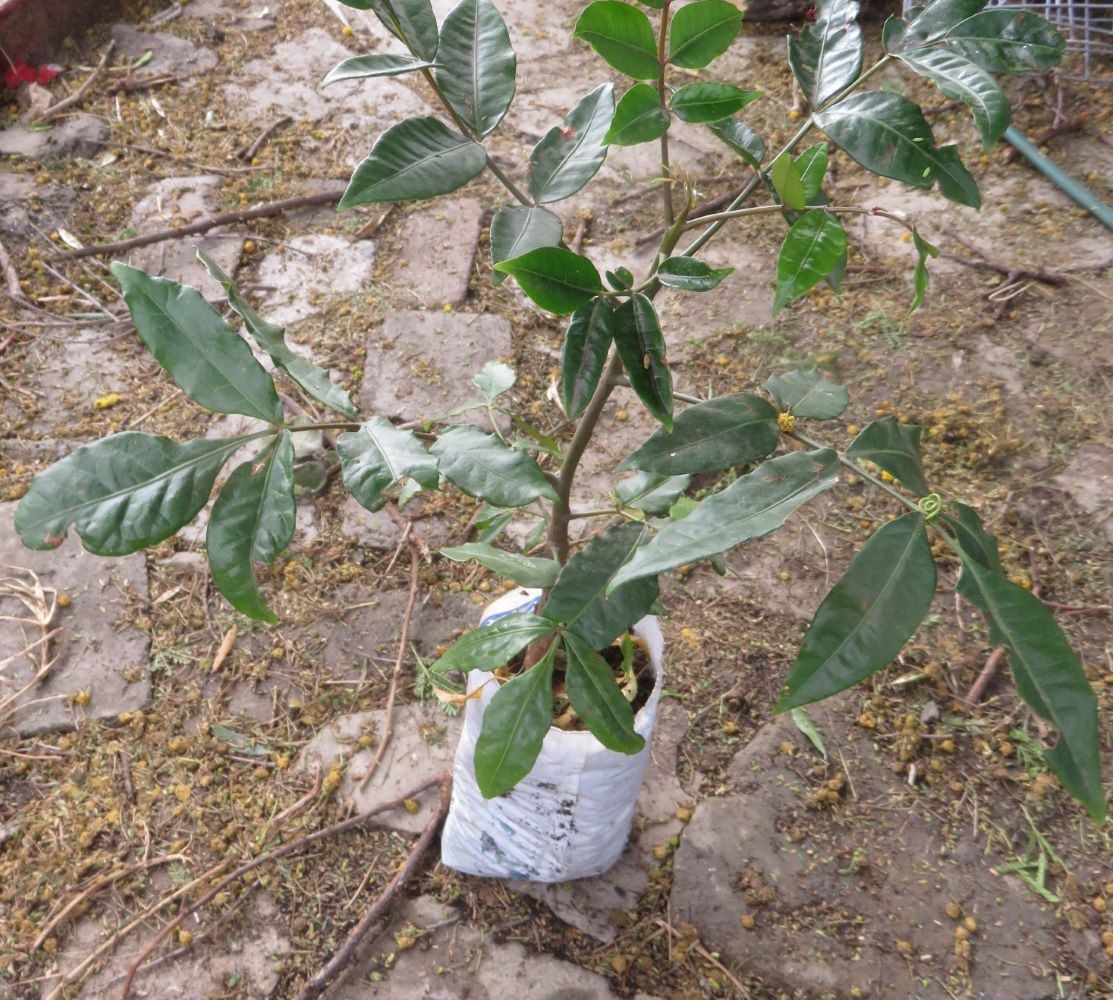 This wild plum tree sapling is about 18 months old.

In another article on our food website I will give a recipe for Harpephyllum vinegar. Home brewed vinegar is one of my remedies for boosting gut flora diversity. Natural vinegar contains a lot of lactobacteria, without having the milk contents to which many people are allergic.

The wild plum's acidity and tannins are evident, and both bode well for natural preservation of the ferment. Some people even make pink wine from the berries. The fruit are pretty sour and sugar must be added to boost fermentation. The first fermentation produces a very fine aroma, but the vinegar can be prone to oxidation. Then it turns pale brown and tastes flat. Oxidized vinegar can harbour pathogenic organisms and should ideally not be consumed. 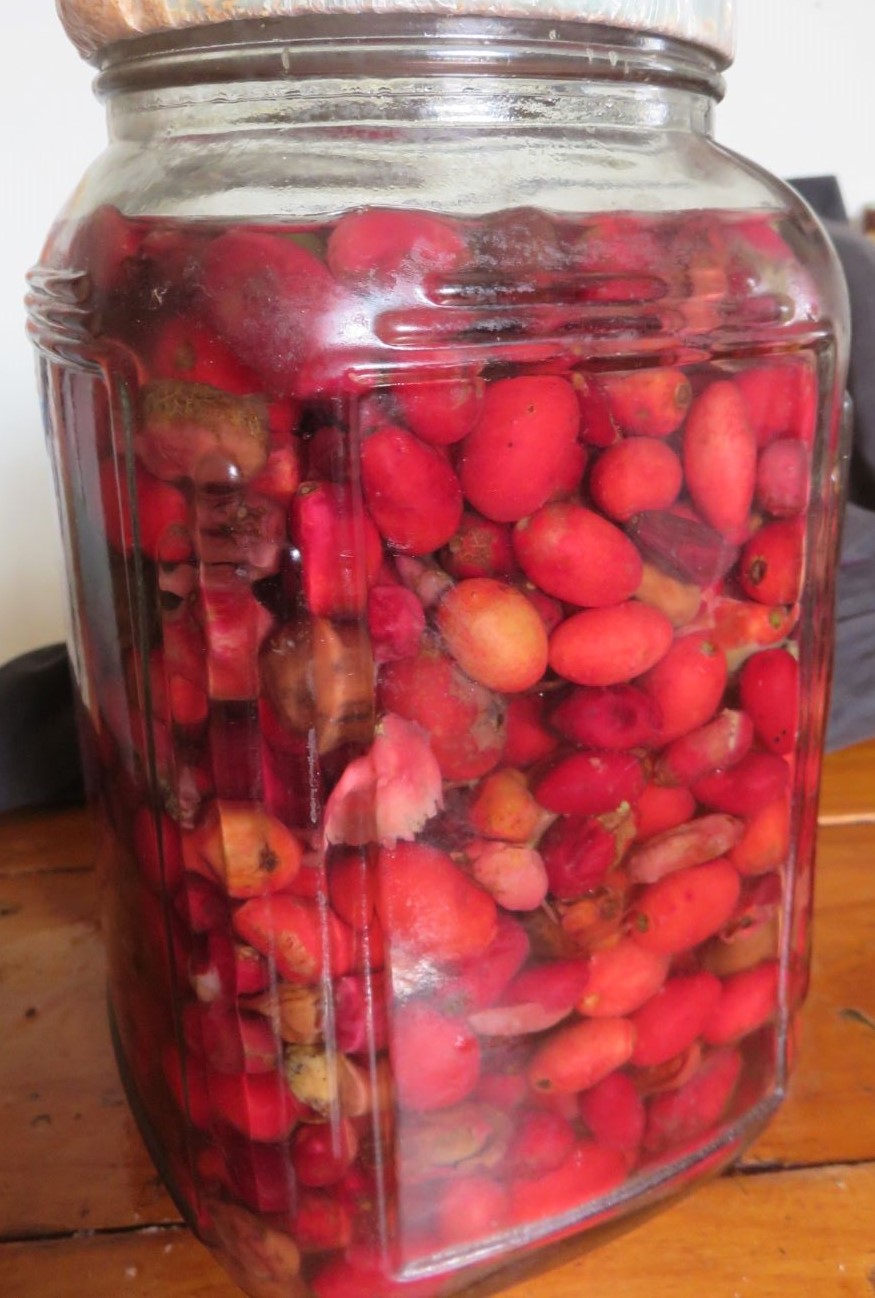 home page for many useful links on natural gardening