It always helps to know garden flowers names. For some months I’ve been delighted by the repeated and long lasting

blossoming of a small tree in the street on the way to gym. It is flowering in the blistering summer heat and into early autumn when few local plants are flowering. It appears to never get watered. I thought it would make a lovely addition to my garden, and photographed it. I thought I could plant it against the sunny south wall, so that there would be flowers in the garden for January and February, and March. Then I did some internet research and turned against the idea of planting it in my garden and rather using an indigenous tree. But I'm jumping the gun and will explain below. 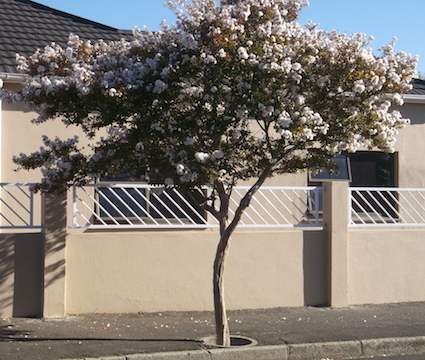 struggling to find the name of a flowering garden plant 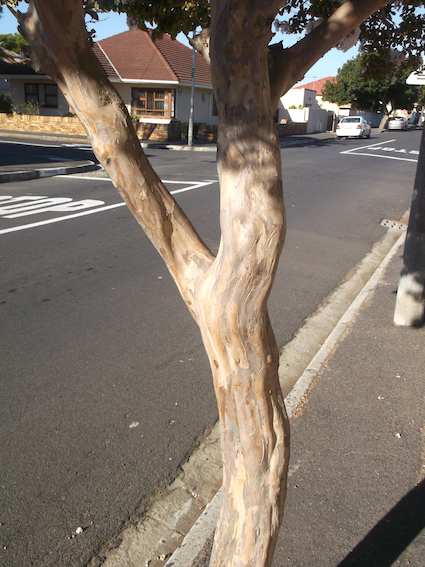 I didn't know this garden flowers name, so I googled around without results on small tree without results. I asked myself what other tree it looks like. The smooth bark, rounded leaves and blossom like flowers led me to think it was some kind of relative of the Guava tree. I googled guavas without result. I asked myself where it probably came from. There was a vague Eucalyptus like appearance and I guessed at Australia and it was on an Australian gardening link I finally found a picture allowing me to identify it from the characteristic fruit capsules and branching. In fact the Guava originates in South America, and belongs to the prolific family Myrtaceae including Eucalyptus and many spice trees such as cloves and bay. 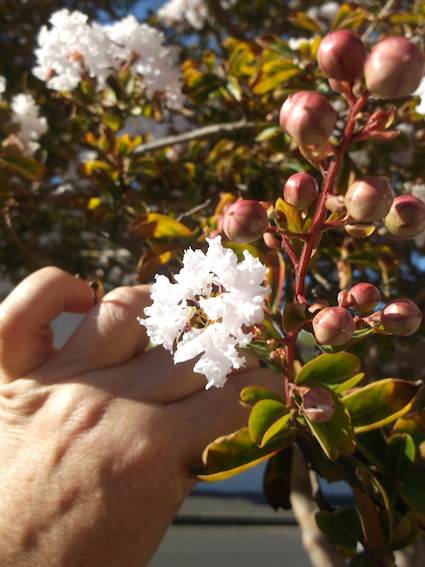 This garden flower’s genus name is Lagerstroemia, of the Lytheraceae family, order Myrtales, thus a distant relative of the Myrtaceae family.

It’s common name is bugwood, or crepe myrtle, and there are fifty Lagerstroemia species originating in the Indian subcontinent through to Australia, some of which are widely and successfully grown throughout the world.

I am not sure of the species but the blossoms are white and profuse, and the growth forms a dense pom pom, whereas the purple version with more sparse radiating branches grows in nearly every garden here in Goodwood. I have only seen two of the white ones. Lagerstroemia parviflora, a different species ? This is not just a garden flowers name, it is the host plant for the wild silk moth that is commercially important in India, and Lagerstroemia timber, in the larger species is very hard and durable, and used for railway sleepers. This all sounded very interesting, and the white Lagerstroemia is a strikingly beautiful tree. 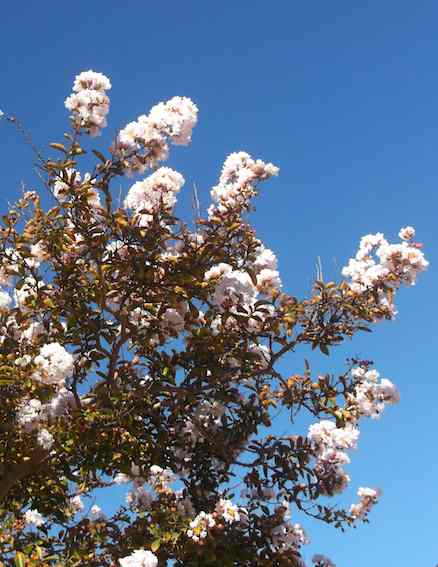 What about the flip side of its attractiveness and hardiness ?

However, being rather aware of the problem of plant invasion due to my mother's botanical activism, the first thing I did after that was research its invasiveness by looking up this lovely garden flowers name.

Lagerstroemia indica is mentioned as globally invasive in many tropical and subtropical regions. It is hardy so it is planted around parking lots, on highway islands, and has escaped from cultivation and become naturalized in grassland, waste ground and disturbed land (http://www.cabi.org/isc/datasheet/29669). This sounds pretty dangerous to me. It sounds like a ruderal or colonising species, the primary vegetation when land is disturbed, hence ruderal or growing on rubble. These have the characteristics of massive seed production, low nutritional requirements for seedlings and fast growing roots that do not need symbiosis with soil fungi to function. These are somewhat similar characteristics to those found in invaders, which are not exclusive to them or always present in an invader species: fast growth, rapid reproduction, good dispersal, phenotypic plasticity (changing form to suit environment), tolerant of diverse conditions and nutrition, associated with humans, and have a record of invasiveness (from Wikipedia https://en.wikipedia.org/wiki/Invasive_species ).

The ruderal plants often overlap with what we’ve come to know as those inconvenient plants, weeds. However, invaders are so defined because they suppress and eventually wipe out other growth, as has happened in South Africa when Australian Acacia species destroyed huge tracts of Fynbos. In turn, some of our plants like Carpobrotus edulis, a type of iceplant, are invaders in other parts of the world like California. Garden flowers names are frequently on the list of invaders. What can one learn from this ? When plants move around the world they can become dangerous to other plants. Always check out a garden flowers name before buying it. Especially if a garden plant is exotic, check out its invasion history before planting it in your garden, from which birds and other animals and human feet, wind and water, can carry it into the wild. I cannot be sure from these records if Lagerstroemia is merely a colonizer of disturbed ground or a killer of established vegetation, and this may differ between species. Nonetheless there is enough reason to avoid it. Lagerstroemia also has an aggressive root system, making it an unsuitable plant for walled areas. I see every day how the Ficus planted as street trees in Goodwood uproot the tarmac and break walls that are fifty years old, nonetheless I am grateful for them, because they are being progressively removed and replaced with nothing, and this area can be a hot concrete jungle in February.

Sadly, I found Lagerstroemia is indeed recorded as invasive in South Africa, and in the US too in the southern states from county Bexar, and eastward as far as Cumberland county., according to the invasive plant atlas. In South Africa it is invasive in the Kruger National Park.This garden flowers name unfortunately rather too tarnished. 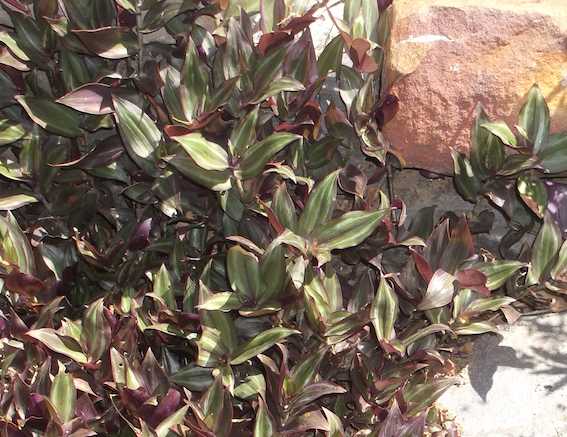 I also found out that my favourite groundcovers of the moment commonly known as purple and striped wandering jew, Transcedentia pallida and T. zebrine, both in my garden, are invasive in the Kruger Park too. Up north in Mpulanga and Kruger the invasive plants are a scrap book of all the most dramatic and colourful tropical things you can imagine, including at least twelve kinds of ginger with beautiful flowers. So if you live up north in the subtropics, don’t throw these over the garden wall into the bush or let them get into streams… by growing them along a stream in your garden, that is he way the ginger varieties invade.

I researched a replacement for the crepe myrtle, a tree with profuse white blossoms and small habit and was delighted by what I found.

Dombeya rotundifolia does flower in a different season to the Lagerstroemia, but  makes up for that in having perfumed blossoms which are persistent, drying out on the tree where they stay till the fruits come, and are excellent for dried flower arranging.  It is native from Kwazulu right up through to Ethiopia, flowers from July to September, is of the Hibiscus family, and should be planted with the new methods of planting trees that are popular globally. The old fashioned method was to dig a huge hole and fill it with compost. It kills many trees like Dombeya by causing root rot. For the free root planting method, or shallow hole method, there are many internet sources.

For more suitable garden flowers names, peruse the national botanical garden websites: There is a picture of a beautiful specimen and more growing information written by Alice Aubrey of SANBI, Witwatersrand National Botanical Garden, and from perusing the nursery’s site, I see they have answered questions from readers quite recently.

I called my mother who has worked with alien eradication on Table Mountain. She is 86 and going to the mountain today to check out the forest trees she planted by the free root method (see above) for which she has her own knack involving surrounding the trees with a pile of loose river pebbles. Her friend who works in a reserve in our region of natural rainforest uses this method and has a very high

success rate, but it hasn't really caught on yet in South African horticultural practice. My mother hasn’t ever heard of the indigenous Dombeya being invasive down here in the south. This is wonderful news. Dombeya looks like a suitable small blossoming tree for local gardens. But if you live elsewhere in the world, its availability and potential invasiveness will need to be researched. I'm so grateful of her memory for garden flowers names.