I think one of the most important of flower garden ideas is to know what to grow in the first place. Nothing is more informative in this regard than becoming a flower spy.

Acquire a simple camera that travels with you wherever you go, and get a notebook, or open a file on your computer. Be on the lookout in your neighborhood and your city for flower garden ideas which embody good plant combinations and flowers which are making a great display at what time of year. In spring there will be oversupply. I watch carefully in those hot dry summer months when most plants are concentrating on vegetative survival. Record what you see in the ‘off season’ too, especially winter in cold climates. Become good at seeing everything, from soil type to growing conditions such as sun and wind. 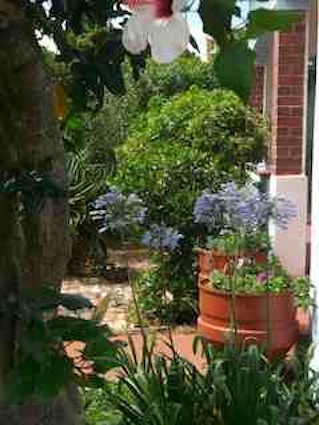 It is hard to have no flower garden ideas in a place in which nature looks like this. These plants were not planted or photoshopped but have grown this way since the dawn of 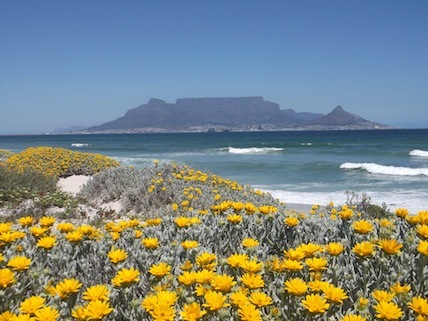 time. In spring at the Cape come the indigenous Meseums, Dorotheanthus, Arctotis and much much more, they carpet the ground in abandoned fields, on road islands and way up in the desert. At the same time the imported fruit trees and climbing roses flush with blossoms along walls and fences.

In the hot months of January and February, things look drab in my area, where there is less money for horticultural display. Only the Hibiscus trees, Oleander and some late flowering Callistemon (the latter two highly invasive) which seem to be very hardy, flower without water. It is an odd time to flower in our local climate, when plants are stressed, so we will find that many exotic plants, whether from across the seas or across the country from other rainfall zones (like Agapanthus) are flowering in the heat. Bear in mind when making your plant choices that some exotics may require a lot of watering, making them water – unwise, and limit these plantings, perhaps to a pot you can stand in a tray of water, so that you can save water when there are restrictions. Exotics may also be invasive, when often a lesser known indigenous plant can serve a similar design purpose in terms of season, colour and form, so if you can afford it, go for the native plants.

Taking your camera on field trips

I have taken a lot of photographs on trips to the National Botanical Gardens, where I get most of my flower garden ideas. I photograph plant combinations. Sometimes it is not the combination of flowering plants which is striking, but the effect of flowers near other foliage, such as deep blue Agapanthus praecox growing with dark green and blackish Restios. It can be an effect of colour hues, like this, grey foliage and red flowers, black foliage and dark blue flowers, or of saturation, as in white Agapanthus growing with grey leafed succulents, or contrast of colours and saturation, or a harmony of forms (such as similar but different strappy

leaves) or contrast of forms (Large leaved stiff Kalanchoe succulents with smaller soft petunias that I like in my garden which would not grow in Kirstenbosch). The possibilities are endless, so whatever appeals to you and strikes you, you can capture, and repeat at home, either by copying with identical plants or analyzing what you see for the artistic principles that underlie the success of the combination.

look out for other gardener's flower garden ideas

I once worked with a genius of the flower ‘border’ Els Greshoff who was kind enough to give me a trial as her apprentice when she was in her early eighties. She planted a stunning combination at an apartment in Camps Bay: grey leaved artichokes, dusky orangey red Nemesias, and white starry Gaura, not February bloomers, it must have been September.

Another impressive border I have seen was in a Gertrude Jekyll garden in England. An old brick wall with a sunny terrace in front of it with a rockery were planted with a clever selection of flowers. It must have been facing south. The plants bore large warm colored flowers, yellow, orange, red blooming riotously, many in the forefront had daisy like or pom pom like forms. I remember seeing sunflowers and what looked like chrysanthemums. There were tiny bits of pale pink and purple as a contrast of both size and color, and it was very varied in terms of height and form, but in general large flowers to the front as if it were a fabric design. I can’t find the photograph, but here is another of her gardens, in which the clever planting with foliage is a feature. It is not just about the flowers but about the backbone of permanent plantings in which they are situated.

I am also fascinated by the beauty of her planting plans, as drawings ! Gertrude Jekyll was one of the greatest English gardeners of all time. You can’t go wrong by learning from the artistic principles she uses in her flower garden ideas.

never stop looking around you

A few years ago racing along the M3, I saw a roadside planting which took my breath away. The Agapanthus were in bloom, in swathes several meters deep, and interspersed with Aristeas, which are taller and were planted towards the back, but not rigidly so, The beauty of the combination could be found in other plant types, and are not dependent on the species. The Agapanthus are sky blue, growing in a round inflorescence, like big blue balls the size of a football. The Aristeas are a deeper, darker blue, growing in tall spikes about 2 meters off the ground. Both have long strappy foliage, the Agapanthus is stiffer and lighter green, the Aristeas floppier, longer, sharper tipped and far more profuse. I think the effect was created by harmonies of near relationship, sky blue and royal blue, strappy foliage of two different kinds, and the tall inflorescences, Agapanthus of a mid height and Aristea very tall, the only stark contrast being the shape of the inflorescence. A while later on the same road I noticed the Aristea were forming bulblets on all the inflorescences. I harvested cups full and planted them at home. They grew green leaves every year, but seven years later they are still the same size. Obviously even our undemanding indigenous bulbs need food and sun to fatten up. They were growing on banks of clay, and I planted them in sand, thinking they could grow anywhere locally. I am a spy, and a thief, and still an amateur. 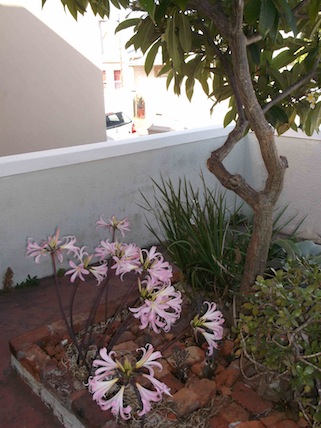 These Amaryllis belladonna are from stock originally planted by my Grandma in another part of town. I enjoy the pretty curvy pink flowers' contrast with the harshness of the bricks paving the area around them, and the surrounding growth of strappy irises and fat stunted succulents. The other flower garden ideas, such as the choice of planters, and using unusual planters, and so forth, belong on another page. 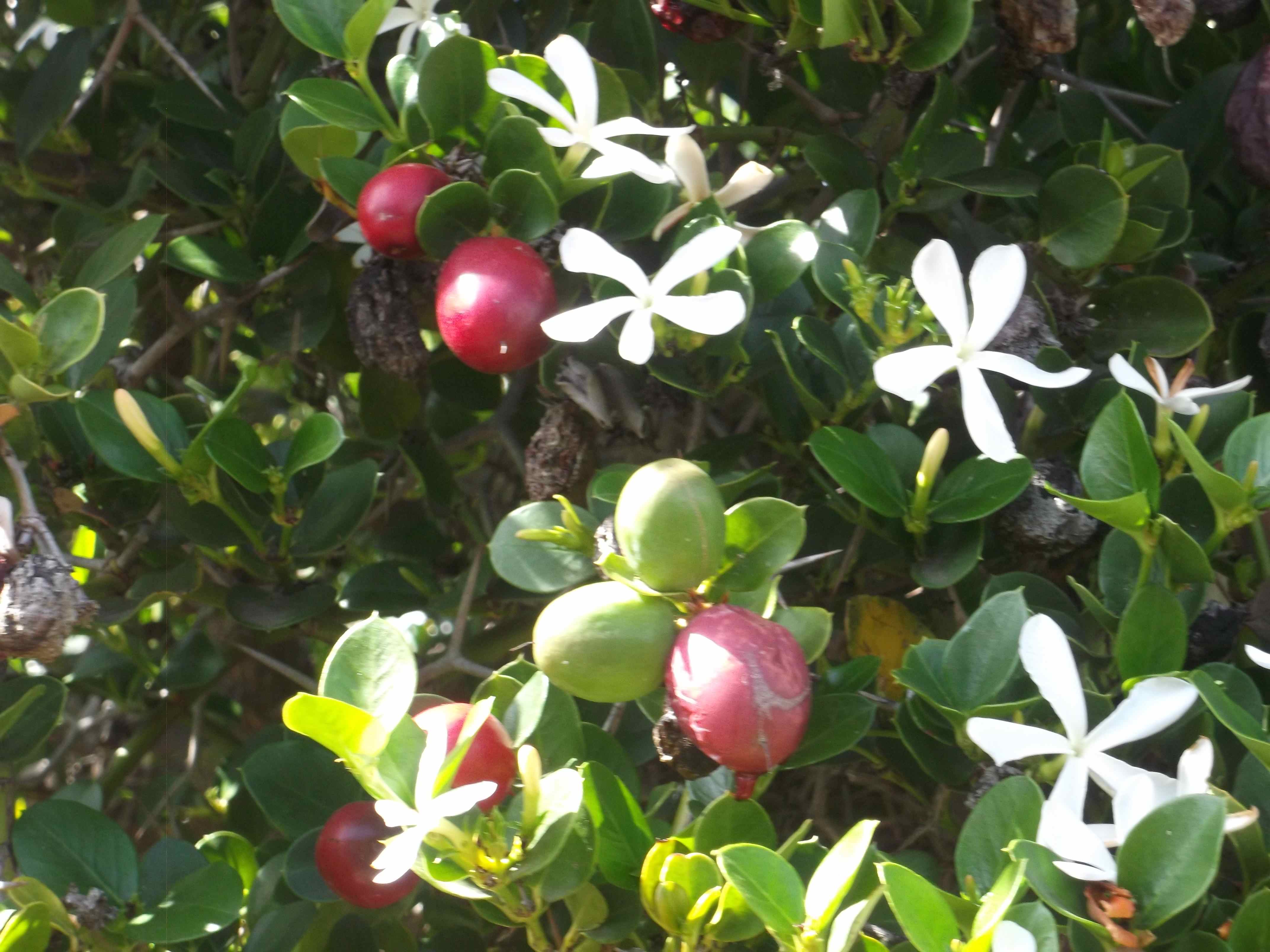