Growing pineapples one of the easiest fruit

Growing pineapples is easier than you may think. 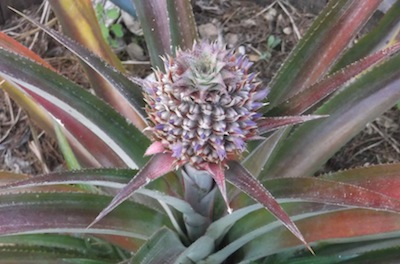 A young pineapple: the easiest fruit to grow

A misconception about growing pineapples from kitchen waste

There is a story about the windowsill propagation of pineapples, that you can take the leaves with half an inch of the fruit disc attached, and hang it in water and it will grow again. I tried to get the pineapple fruit stubs with spiny leaves attached to grow, many times and failed. I would place some sticks across a shallow dish and fill it with water and suspend the pinapple with the cut off disc just touching the water. Either they would rot or die. My husband tried it, and irritatingly, succeeded first time.

He suspended his pineapple in the same manner, from some chopsticks, but in a deep bucket, after removing the fruit from the leaves so that there was a succulent inner stalk at the bottom. Perhaps he dried it a bit so that it could form a callous. The water he put in the bucket was fish pond water. Why his system worked I can only speculate. Perhaps it was the low level of organic nutrients in the water. Mark you our fish pond is a well kept Koi pond. The water is highly oxygenated and filtered through a biofilter several times a day. It is not dirty or smelly pond water. Perhaps it was the removal of the fruit remains from the leaf stalk, so that it was less likely to rot, and the stalk, with its buds and nodes was exposed. Callousing of the fruit before suspending them in water may also prevent rotting. The deeper bucket may have shaded the roots from the sun, and signaled a darker environment to the root producing hormones, as well as provide a more stable water supply. My saucers containing the pineapple stubs were always drying out. 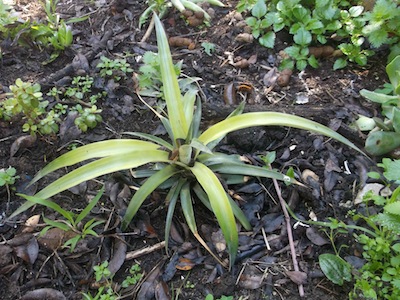 a pineapple with smooth leaf edges, growing in garden soil

Caring for a growing pineapple

Anyway, after an infinite amount of patience was exercised, Stephan had a pineapple plant that was growing. We eventually planted it in a big tub with lots of vermicompost and a worm feeder (a large 1L yoghurt container with the bottom removed, and buried in the plant pot, to which compost worms and regular additions of kitchen waste were added, and then the lid replaced to prevent flies). We watered it with about the same frequency as the other vegetables, every second day. 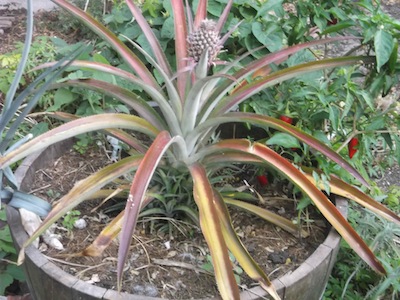 the pineapple growing in a barrel, with flowers and suckers

After about 18 months a beautiful tiny green pineapple appeared and thrust up from the center of the crown of leaves. After several more months small lilac flowers emerged, arranged in the typical spiral form found on a pineapple or pinecone. They must have produced nectar because I noticed a malachite sunbird enjoying the flowers. 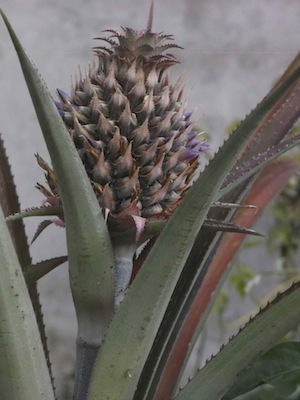 the beautiful pineapple flowers are visited by sunbirds

The pineapple, Ananas comosus, is a member of the family Bromeliaceae or Bromeliads. It is a beautiful and sculptural addition to the garden. Not only that it comes down to us from an inheritance of millenia of cultivation starting with the Maya. I had always thought it was an Hawaiian plant, and it would be difficult to grow in South Africa, requiring lots of heat, water and special soil nutrients, but it did very well, producing its flower in our autumn and winter, during the rains. It appeared to have rather a red colour, indicating some deficiencies, but it produced a delicious, if undersized fruit (it was about 12 cm in length). Towards the end of the season, the fruit became so heavy I had to stake it to prevent the stem from breaking. 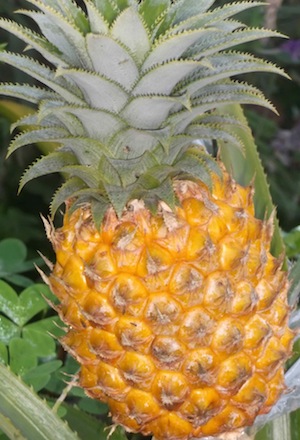 I planted another successfully rooted pineapple in the garden soil, which beyond the mulch layer is deep old sea sand, and it has remained very static for about a year, not increasing much in size. The controlled environment of the pot, its moisture and humus rich soil may have made the difference which spelled success for one and not the other.

The unexpected rewards of growing pineapples ! 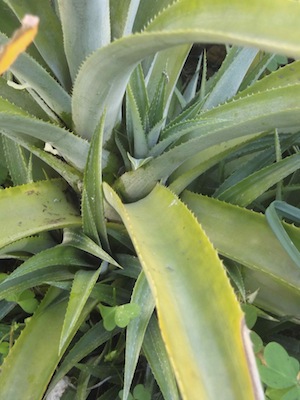 a growing pineapple with numerous side suckers

As the lovely lilac flowers beloved of the malachite sunbird appeared, I noticed that the plant was producing a lot of side shoots. Months later, after harvesting the fruit, we dug it up and put it aside in a bucket of water. Eventually after eight months of lying with its finer roots in a pot of stagnant water and being totally neglected, I subdivided it and planted out the suckers. There were about thirty all in all, each with at least one small root. I had to crowd them into pots as I lack space. 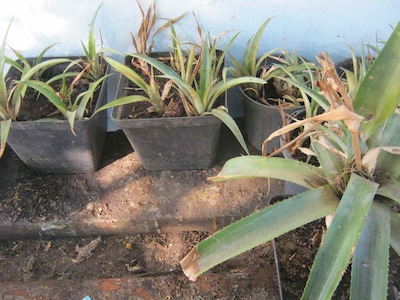 Its beauty and attractiveness to rare birds commend this addition to an eco-friendly garden. Also, I must conclude that against all my prejudices, the pineapple is one of the easiest fruit to grow in the Cape Mediterranean climate. It reproduces prolifically, if slowly, by vegetative means. The only fruit that are easier are the guavas, the Cape gooseberry (both Meso American in origin) the old pear tree and olive (only if pruned) and the Carissa bispinosa, which isn’t easy to harvest because of its thorns. You can also give yourself a nasty cut on the blades of the pineapple, so when buying fruit at the market, choose for propagation a pineapple with smooth rather than serrated leaf edges, as seen in the second picture from the top. Your patience with the culture of pineapples will be amply rewarded with delicious organic fruit and easy vegetable gardening.

the benefits of worm farming