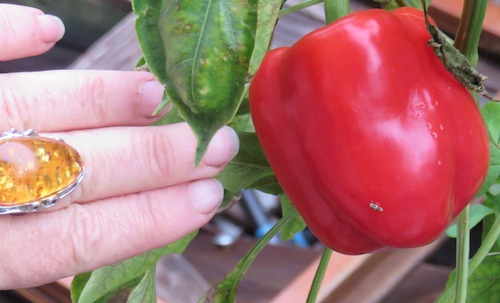 Growing bell peppers this big is easy when you know how

Bell peppers and other Capsicum varieties

Growing bell peppers in pots is one of the experiments we have tried successfully in our little backyard farm. In the last few years my husband has become fascinated by the challenge of growing all members of the genus Capsicum, or peppers.

There are thousands of bred varieties of Capsicum, or chili and bell peppers, but only four species in the genus: Capsicum annuum (which includes bell peppers, paprika, cayenne and pimento, C. frutescens contains the tabasco pepper, Thai pepper, piri piri and so on, C. chinense are some of the hottest chili peppers like Ato rodo, habanero and Scotch bonnet, and C. pubescens includes the peppadew and bishop’s crown. 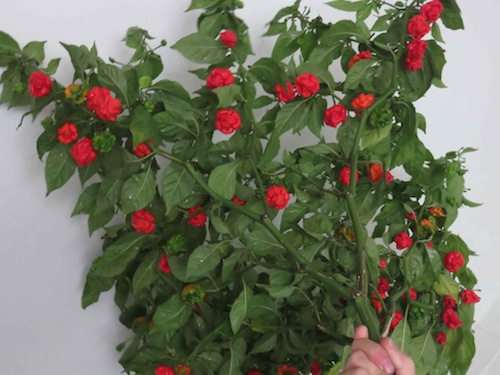 His true love a Caroline Reaper, destroyed by freak hurricane

Growing the Capsicums, I would even venture to say all the Solanaceae, from seed is essentially the same for all varieties. They will differ only in their germination rate, need for humidity, their preferences for warm weather, the length of the life of the plant and the length of time they take to fruit. Most chillies are perennial in our climate and less susceptible to Fusarium wilt than tomatoes. In our climate chillies grown from seed tend only to fruit in late summer and autumn. Our bell pepper, ripe red now, has chosen mid winter to be ready for eating. 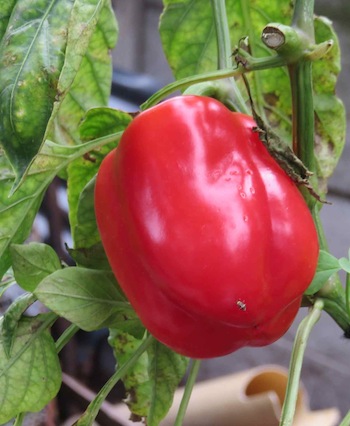 The remaining bell pepper after the first got cooked

Spring and summer sowing or sowing in a temperature protected place like a greenhouse or windowsill is best. Sow in a thirty thirty thirty compost-vermicast-sand mix.The Capsicums also like even humidity, and germinate well under plastic. The seedlings come up with the first two seed leaves long and pointy tipped like all Capsicums, most Solanum and many Solanaceae. Even Tamarillo seedlings look like tomatoes or peppers at the two leaf stage.

Ideally transplant them as soon as they have six leaves and don’t let them become root bound., but don’t plant them before they have four real leaves. Rather let them grow a little bit till they are ten centimetres high. When you transplant the seedlings keep them in semi shade for a week. In the ground you can shade them with a twig tepee, made of 30 cm leafy branches of any plant, poked into the soil to protect the seedlings from the midday and afternoon sun. These twigs will soon drop their leaves. Otherwise remove them after a week.

Unlike tomatoes which love the heat, peppers like warm weather but when it gets really hot, say above 30 degrees Celcius, or 86 Fahrenheit, you need to move them into partial shade, and make sure they do not dry out. If they are in full sun, on a very hot day, and also get dry, they can go down in one day and die. They do not like erratic watering. Water two to three times a week in summer weather, and a good watering, and never neglect them for a week. Test the soil with your finger to see if there is moisture in the top inch. If so they don’t need to be watered yet.

My husband found that the growth of his chillies and bell peppers was improved by a tonic of urine diluted one to ten with stood water, sometimes with a little worm tea added, and given about once a fortnight. The chillies and the growing bell peppers benefit from the nitrogen for developing leaves and robust vegetation. When they begin to flower, switch to diluted worm tea and stop the urine feed. 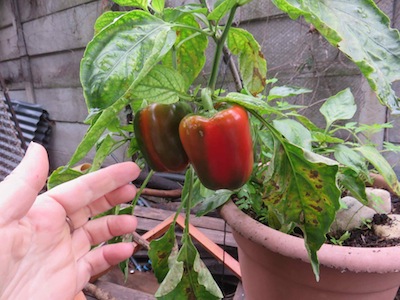 Patient waiting for the pepper fruit

Capsicums show enormous variation in the time they take to flower and fruit and patience is required. The plants will fruit in their own good time. After dropping blossoms for months, they may switch into fruiting mode and get dozens of fruit on one chili tree. However, growing bell peppers you will not have these kinds of numbers, as they are limited to a handful of fruit at the maximum, having such large fruit, but they bring rewards within one season whereas some chillies, especially those not belonging to the Capsicum annuum group, can take two years to bear fruit. 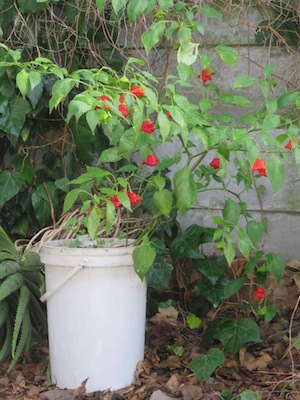 Peppers also appreciate growing in large containers. We grow all our Capsicums in pots and they do beautifully. When your seedlings are large enough to plant out from their seed trays and have 6 leaves at the very least, prepare a large 15 to 20 litre pot with a 30 30 30 mix mix of sand, compost and vermicast. A couple of handfulls of fine mulch like Acacia sweepings can also be added. Water the soil thoroughly before planting out your peppers. Water your chili regularly and keep it in a warm wind-sheltered corner and don’t let it dry out, especially in very hot weather. 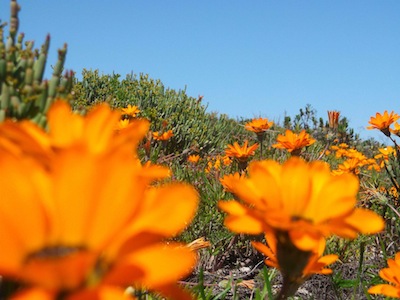 Habaneros in a sheltered corner

Capsicums also thrive on in-pot vermiculture set up as follows. Take a one litre plastic yoghurt pot, cut a large hole in the bottom at least 5 cm across. Embed the yoghurt pot in the soil in which you are going to plant your chillies, so that the top of the yoghurt pot is level with your soil surface. Place some worm bedding like finely shredded newspaper or vermi-castings and a few worms in the pot and top with 1cm of food, say an old banana skin or a hand full of kitchen waste. Cover the yoghurt pot with the yoghurt lid to prevent flies. Plant your chili plant next to the mini-worm-bin. Keep feeding the worms when the food disappears. 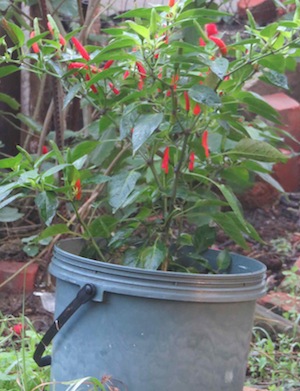 That’s it. Growing bell peppers and chillies is not that difficult. You may notice the leaves being chewed or a yellow leaf now and then but in the main your plant will thrive and produce fruit. You may need to stake the bell peppers because of the heavy fruit and stake the Carolina reaper because of the size of the tree. But staking will not prevent hurricane damage !

Why does the Carolina reaper bush have a diamond shape ?

Is it not strange the way the Carolina reaper bush grows in this form ?