Reviewing Day 1, casting the base

On the first day of building the ferrocement tank, the foundation was cleared, a trench

below the walls was filled with stone, the floor was covered with stone, it was all tamped down, a metal frame was made and laid on the stone, The metal side ribs were driven into the ground through the trench of stone, and then a cement stone mix was prepared and poured all over the circle of loose stone, from the ribs inward.

After a few days break, giving the cement base a chance to set, the body was built. The metal side ribs were curved inward to form a frame with a mouth, like a jar. Horizontal ribs were made and fixed to the vertical ribs, with a double wire loop that Imraan taught us to make, and the parts sticking over the ring at the mouth of the tank were trimmed with an angle grinder.

Then the chicken wire mesh was tied to the ribs. There is one layer on the inside of the ribs and one on the outside. It helps to start at one side, fix all verticals and then pull horizontally, slowly working around the form to ensure the mesh is tight and doesn’t bag, or form creases, because as we later found out, plastering mesh which is loose and springy is much harder. 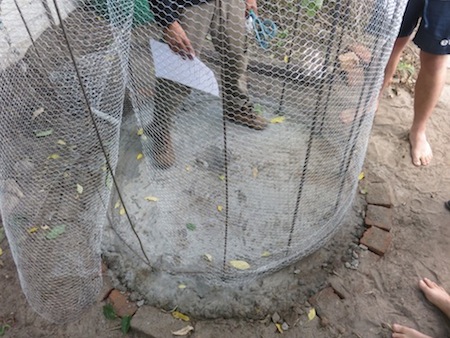 Demonstrating how much of the mesh roll will cover the outside

After tying the mesh onto the form and shaping it in the neck of the tank, we began to plaster. Imraan worked from the inside and the rest of us from the outside. He did a lot of the inside work as only one person at a time can comfortably fit in the tank. The inside work probably also requires more skill and precision as it is the side which comes into contact with water. Some agility is needed to get in and out of the tank, even with the help of a ladder. The mouth of the tank was made large enough to accommodate the ladder of course. 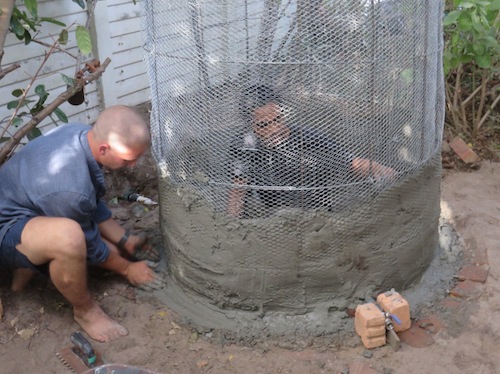 Before casting the base on day 1, the bottom drain must be laid as it is impossible to do once the bottom is hard. The bottom drain empties at a low point behind the tank and cannot be seen here. Likewise, before plastering the sides, the outlet of the tank must be placed, seen directly above at the bottom right, supported with bricks. The overflow must also be positioned, it is much higher up just before the neck of the tank and was done later. Then we started plastering. It worked well when two plasterers worked against each other, pushing back the oozing plaster which falls out of the

side away from the trowel. The body plastering took three days, and on the second it was spitting with rain, and we got nearer to top of the tank before covering it with a tarp to prevent the plaster being washed off. I missed the completion of the plastering of the neck, which must have been tricky as it involved Imraan plastering above his head, with nothing but the mesh preventing the plaster from falling in his eyes. After this hardened, the rest of the plastering could occur and will be dealt with in the next article.

home page for links to numerous articles on natural gardening

links to various water conserving systems covered on this website

Ferrocement Album Day 1: casting the base

Guerilla House, the builders of this tank, on facebook