The King Protea in art, garden and nature 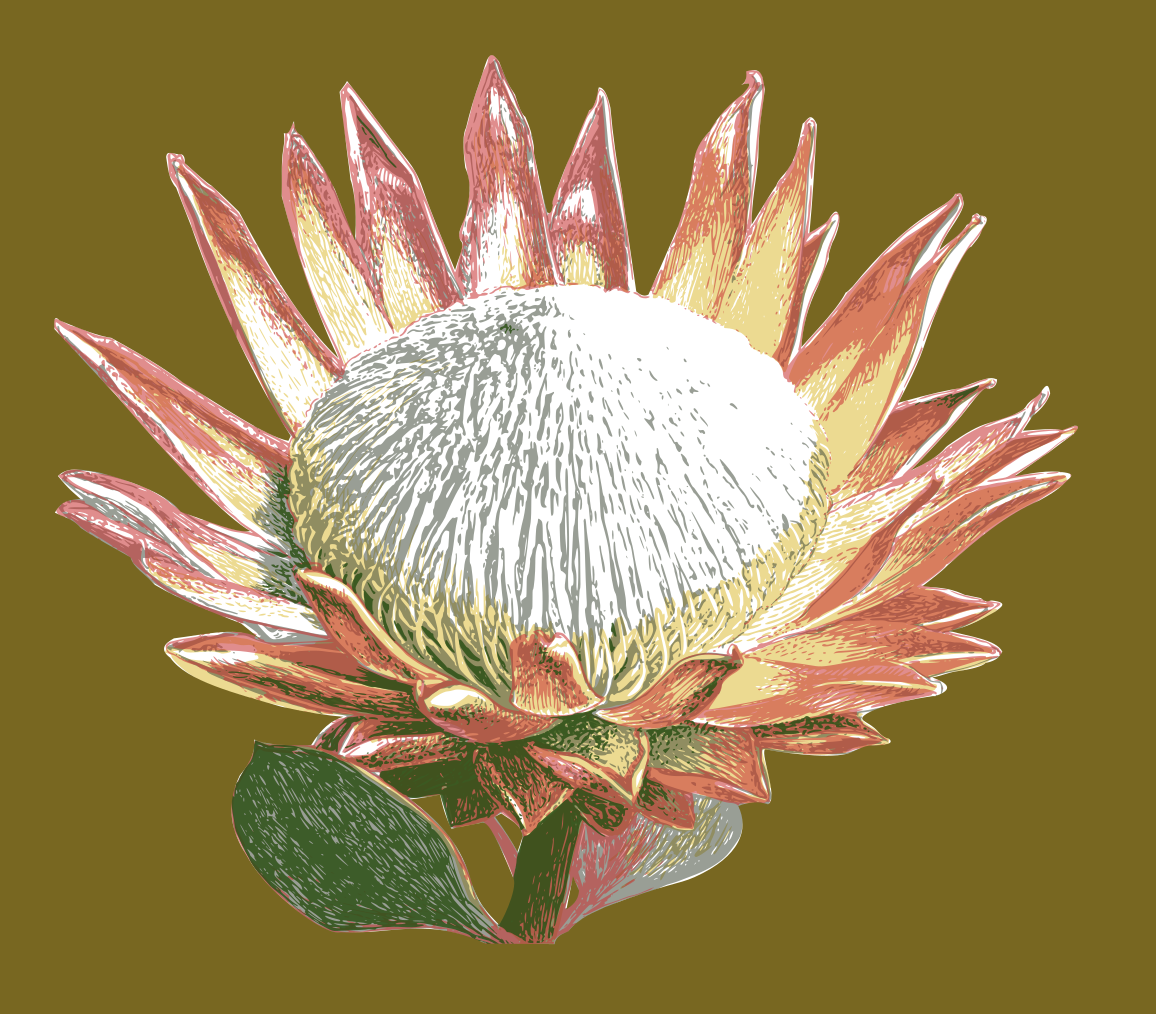 The King Protea or Protea cynaroides is the largest of the South African proteas. You can buy prints of our three different wild flower designs featuring the King at our shop here. The family Proteaceae includes members found in the rest of Africa, southern hemisphere, and equatorial regions world wide.

The name of the flower

Proteas show astonishing diversity in shape and colour, of the flowers and the leaves, and therefore they were named after the Greek god Proteus who was a mythological shape shifter. To the European name giver Carl Linnaeus, the flower resembled a globe artichoke, and therefore the species name is similar to the Genus name of the artichoke, Cynara. Proteas appear most similar to artichokes in bud, rather than open, in my opinion, but the buds of many of the large Proteas have a cone like appearance with overlapping pointed bracts.

Its common names in English and Afrikaans are King Protea, Giant Protea, Koningprotea, Grootsuikerkan, Grootsuikerroos and Bergsuikerkan, or honeypot. Its size is obviously the origin of the 'Giant Protea' or 'Groot...' names. I would say the spiky circle of bracts look like a crown and hence the 'King' or 'Koning' Protea. 'Suiker' is sugar in Afrikaans. Many of the Proteas produce sugar and sugarbirds and insects feed on the flowers, and the early settlers used them to extract sugar. In general, plants in the Genus are given the name 'Suikerbos' in Afrikaans, or sugarbush in local English. Grootsuikerkan means great-sugar-can, and Bergsuikerkan mountain-sugar-can, or sugar pot.

In isiXhosa the name is isiQwane esincinci. However we do not have good dictionaries of the language yet, and frustration with finding word meaning in isiXhosa ensues. Linguists need to do something here. There is a record of close on two thousand Eastern Cape vernacular isiXhosa names for plant taxa. The etymology of the names would be interesting. The second part of the King protea's name, esincinci, is the adjective for 'small', so I'm absolutely intrigued to find out what isiQwane means. In the meantime our indigenous languages and plant knowledge withers away from lack of attention in terms of written records. My ex isiXhosa teacher was going to compile a dictionary of deep isiXhosa with English, and I hope she found funding for this beautiful lifetime project. 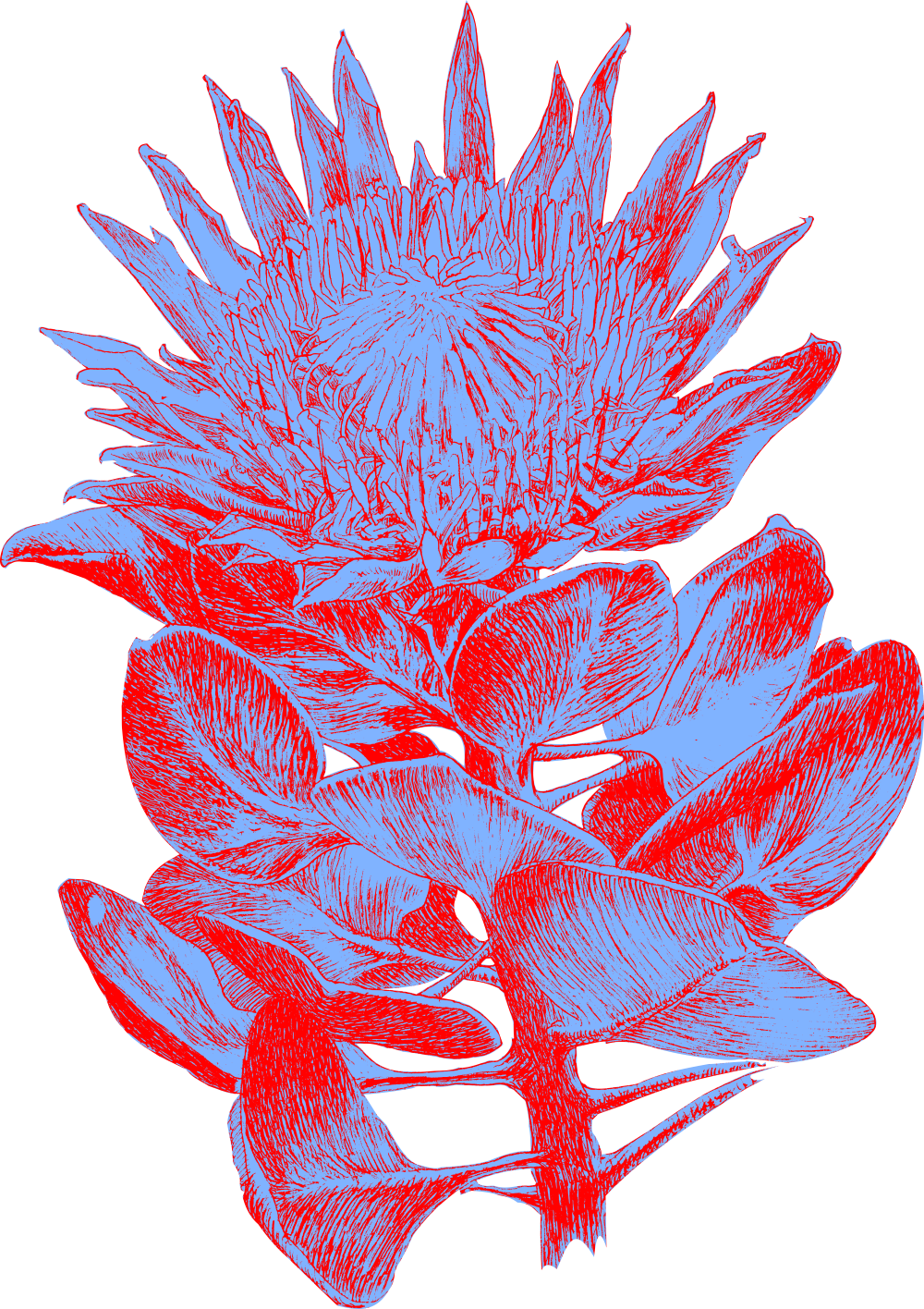 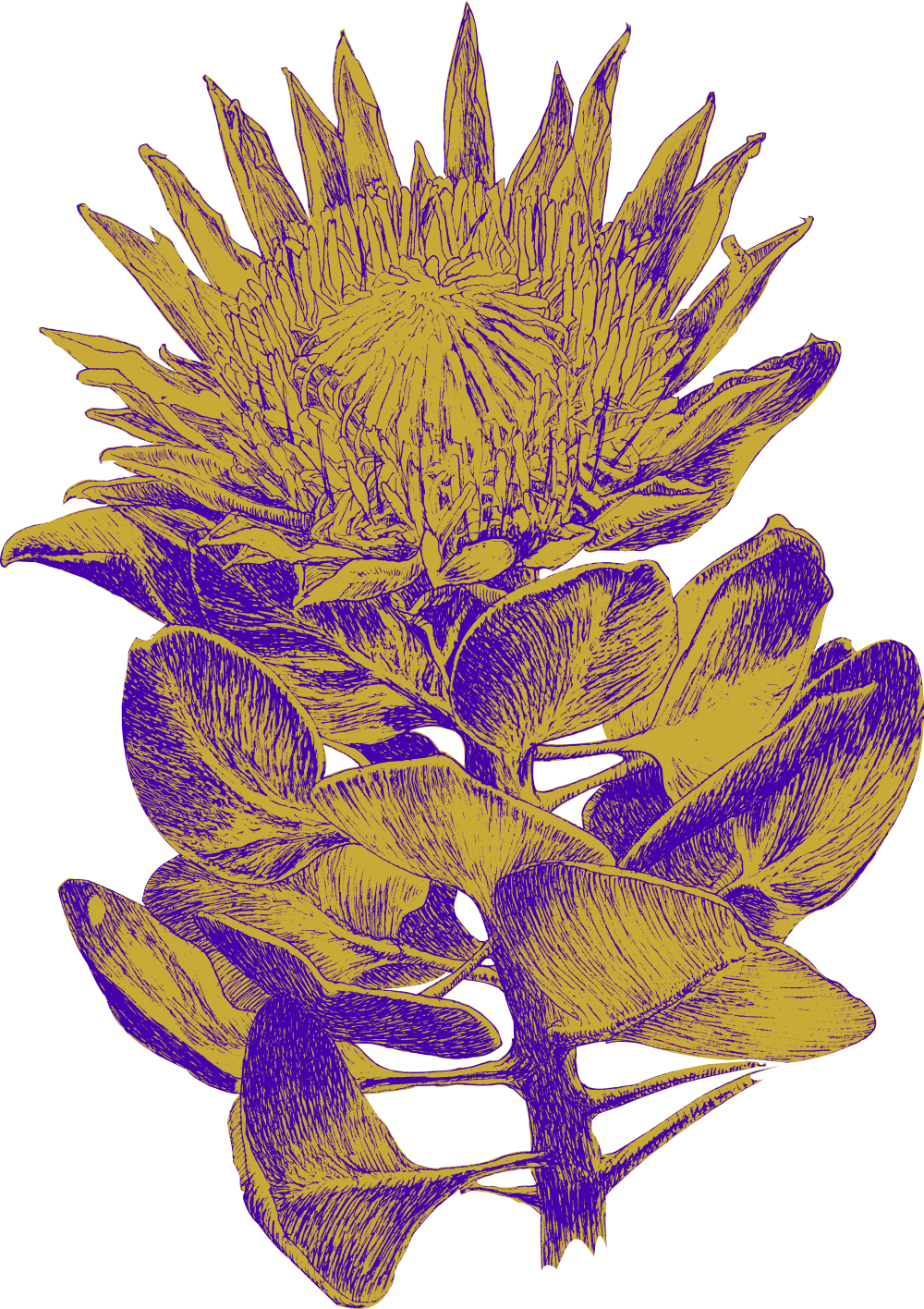 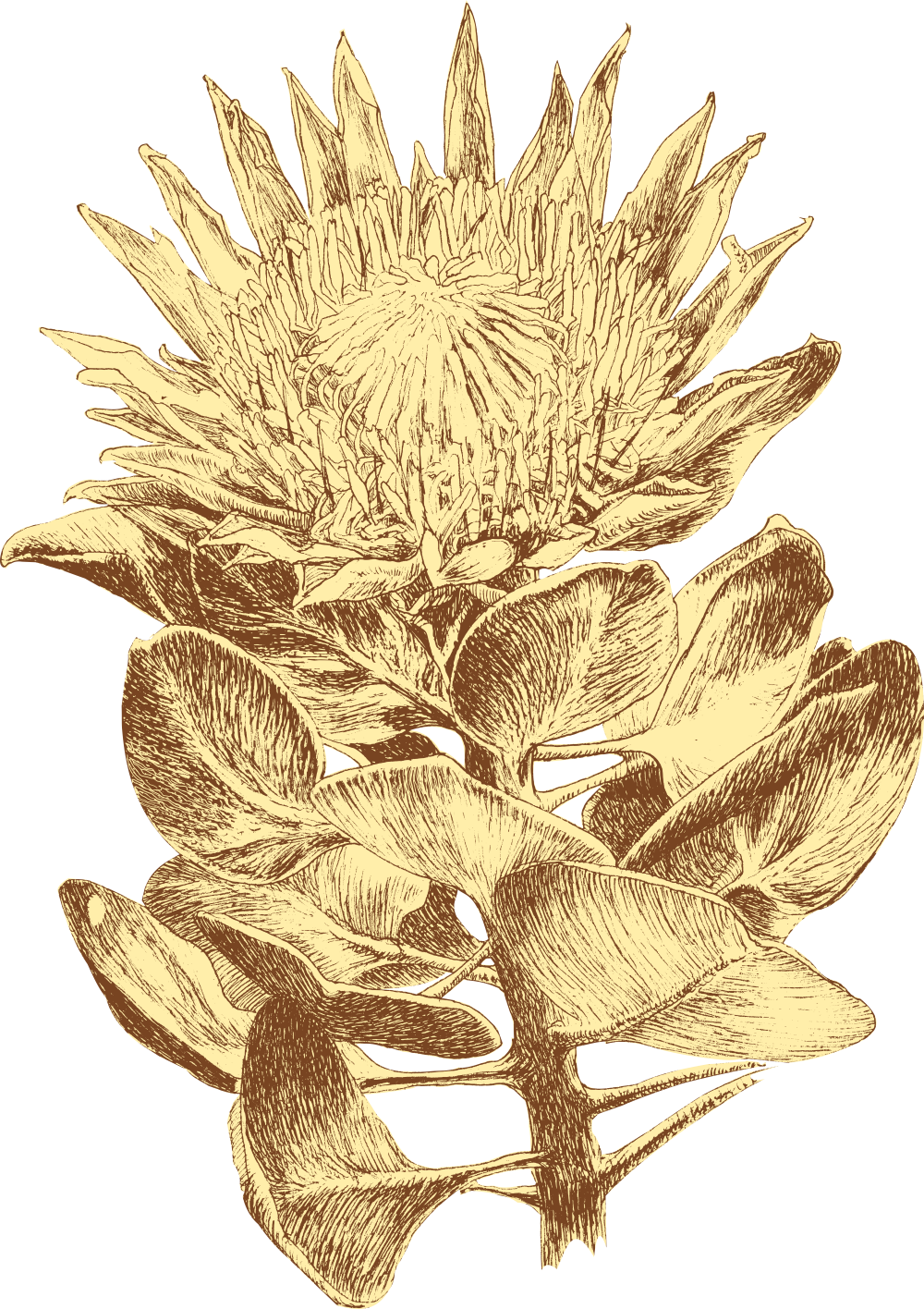 The King Protea is not just the largest, but also the most well known of the Proteas. It makes a magnificent cut flower, singly or grouped, and a feature plant in the garden. It is the national flower of South Africa, and the new (post 1994) emblem of the South African cricket team, who are known as 'the Proteas'. It is the flagship of the Protea Atlas Project. Its image is found in the logos of many South African businesses and institutions, and the name Protea likewise. The isiXhosa name isiQwane is used as a company name in South Africa.

Horticulturists have developed 81 varieties of the King Protea. It has a long life as a cut flower, and can be dried. My grandfather was one of the earlier commercial growers, on a small scale. They are now also grown in New Zealand, Australia and Hawaii. It is grown in Mediterranean gardens around the world but needs the right soil.

The Proteas as a group

The family Proteaceae has about 1600 species belonging in 80 genera. They were a family found in ancient Gondwanaland, and therefore are now distributed through the southern hemisphere, in South America, South Africa and Australia. The northern hemisphere Proteas are found in equatorial Africa, India, south Asia and Oceania.

The sub families Grevilleoideae and Proteaoideae had already separated before the break up of Gondwanaland 140 million years ago. Grevilleoideae occur mainly in Australia. Most of South Africa's 360 Protea species belong in the Proteaoideae, which sub family also occurs mainly in South Africa. 330 species are confined to the Cape Floral Kingdom. The botanical identifiers of Proteaoideae are cluster roots, solitary ovules and indehiscent fruits. Other well known indigenous South African flowers which are members of the family Proteaceae are blushing brides or Serruria florida and pincushions or Leucospermum.

The genus Protea itself has more than 92 species and varieties.

Where the King Protea appears
and its appearance

Protea cynaroides are found wild in the fynbos region all the way from the Cedarberg to Grahamstown. They show great regional diversity in flower colour, leaf shape, size, season and growing conditions because of this, which is good for horticulture.

The King Protea forms a medium height woody shrub around a meter in height, topping at two meters, with large leaves.

Like the Asteraceae, to which the globe artichoke belongs, the flowers are actually clusters of smaller flowers surrounded by bracts. These are not petals in the strict botanical sense. The bracts vary in colour from cream to red, but pink is the most popular commercially. The King Protea's flower heads vary from one 120 to 300 mm in diameter. Per season, one plant can produce from six large blooms to forty flowers in exceptional cases. 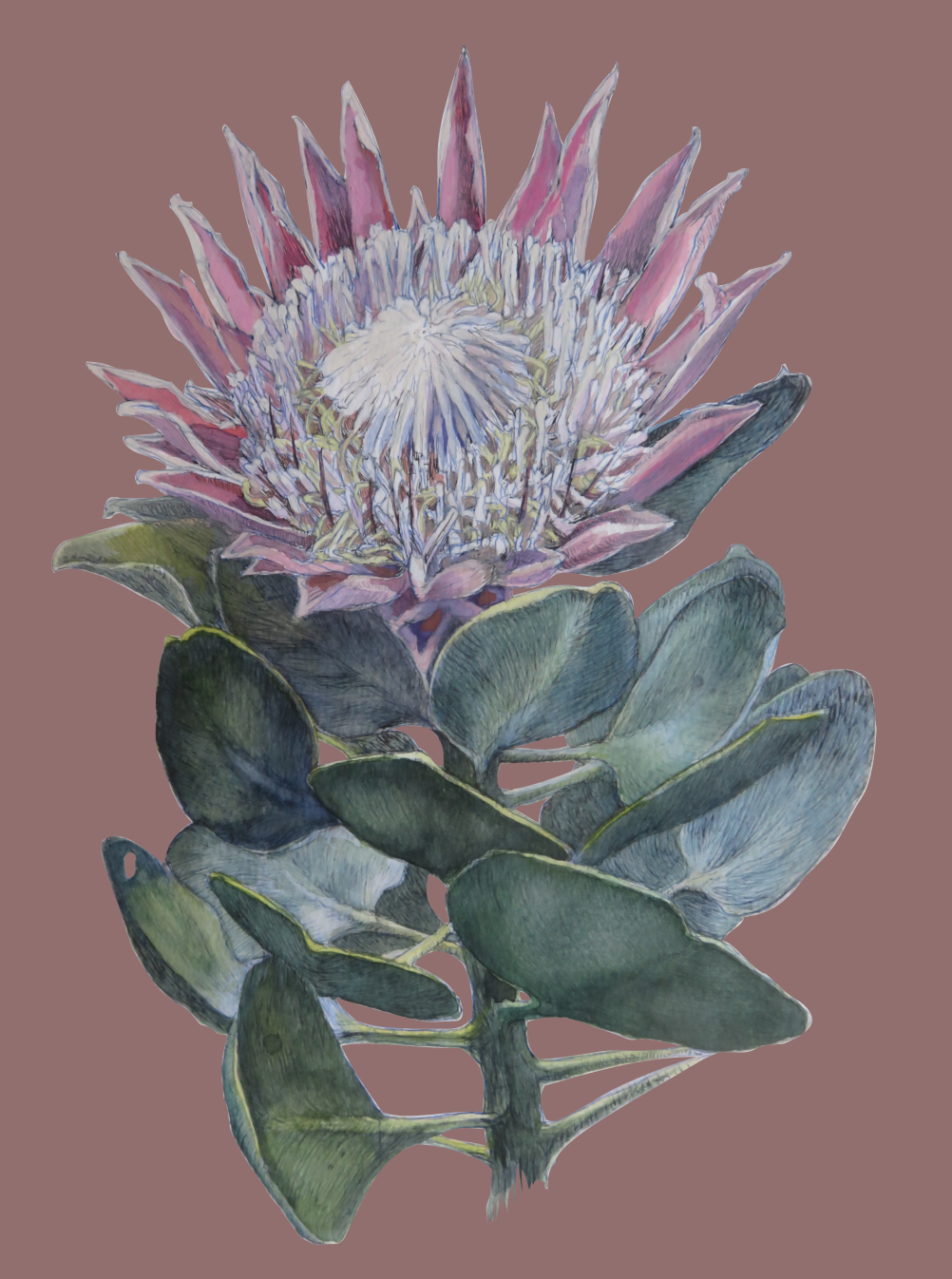 The ecology of the King Protea

In conservation it is of least concern, and is not endangered.

The King Protea in the wild is adapted to hot dry summers and cold wet winters. Its leathery leaves reduce transpiration, and its deep taproot finds underground water sources.

Like many other Proteas, it also has a horizontal mat of roots close to the surface for re-absorbing nutrients from decomposed leaf litter in the low phosporus, nutrient poor soils of its habitat. Fires also return the nutrients of woody plants to the soil.

Like many Fynbos plants the King Protea is fire adapted, and is a resprouter, with an underground stem with thick bark called a lignotuber which has many dormant buds. It grows on mountain slopes, except the very dry interior ranges, from sea level to 1500 meters. The seeds remain on the head for over a year and are released after fire and dispersed by wind, rodents or birds. Fires should ideally only occur every 10 to 30 years.

It is adapted to pollination by birds. The flower's pollen presenters brush the face of long sharp beaked birds like the sugarbird Promerops cafer and sunbirds Anthobaphes violacea, Cinnyris chalybeaus or Nectarinia famosa. The nectar also supports Cape honeybees and other insects such as scarab, monkey and Protea beetles. As low a number as 1% of the flowers can set seed. They grow in nutrient poor soil and seed formation may be taxing to the plant, as the seeds are quite large nuts.

Propagating the King Protea. Ecologically or not ?

Seed and cuttings can be used for propagation. Cloning is used for the more desirable cut flower traits. Cuttings are taken from semi hard wood of the current season, and rooting promoted by using root hormones, bottom heat and mist. Then they are planted up in our autumn, or in spring in areas with frost.

Seeds are sown in autumn.

King Proteas flower in the fifth year. Older plants can be rejuvinated by cutting them back to the ground.

All kinds of poison is recommended in protea culture, mainly fungicide, which I don't endorse. I am sure that Proteas have a fungal-plant symbiosis growing in our poor mountain soils, and I would not want to risk that. Especially if you have imported seed, which only has very tiny traces of our South African soil microbiome. However, if to ensure 'success' you want to go with artificiality and the environmental risk of poisoning your own soil microbiome, rather than the riskier ecological approach, there is plenty of information on the web advocating such technologies. Perhaps a carefully designed compromise would be the best, in which you incoculate the soil with South African microbiota, and make sure your poisons do not reach more places and living organisms than you intended to insure the survival of a plant collection. It is the use of biocides which is causing the global crash of microbial diversity, bees and other insects and animals and birds higher in the food chain, and is poisoning humans too.

My sources of online information are the South African National Botanical Institute Website, Wikipedia
and a publication on isiXhosa plant names.

The King Protea from a screenprint design