Growing mushrooms:
an introduction to three workshop albums on spawn and using straw and logs

A while back I was introduced to growing mushrooms when I attended the Guerilla House workshop entitled ‘low tech shrooms’.

As it states, the workshop equips one with the knowledge to grow mushrooms without the high tech controlled equipment used in commercial production. For a permaculturist the low tech part is good news, not just because its cheaper for a beginner, but because one is going to end up growing mushrooms which are adapted to your garden. The loss in yield compared to commercial production is compensated for by using mushrooms for ecosystem creation.

The very basics of
growing mushrooms 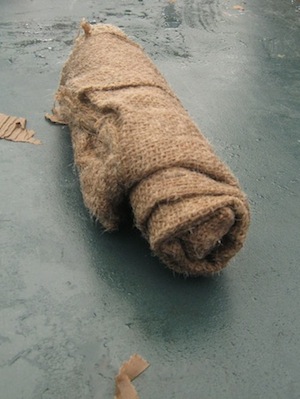 In mushroom growing there are generally two processes. First one cultivates spawn, or mycelium on some medium and then one uses this to inoculate the growth medium on which the mushroom fruit will eventually appear. We learned about propagating spawn straight from mushrooms bought at the grocers, using their spore dust or their stalks. This first growth, the making of spawn, uses media like rice, sawdust, corrugated cardboard, burlap sacks and wooden dowels, and we were given something to practice on at home (an oyster mushroom cocooned in cardboard). Then we learned about growing mushrooms on straw and logs, and practiced on real materials present, inoculating them with preprepared oyster ‘spawn’ consisting of wood chips completely overgrown with oyster mycelium, and wooden dowels which also were covered with mycelium. I say covered loosely. The mycelium penetrates through the wood and substance of the spawn. We thus engaged, hands on (or should I say rubber gloves on) with the whole process from start to finish, but we’ll have to wait and see what happens with our own first efforts. Here is something on my attempts to grow mushrooms at home in the bathroom and in beds outside in the garden.

The albums and articles on growing mushrooms to follow

I’ve divided the huge photo album from the workshop in three. There is one on spawn, one on using straw as a pure growth medium, or in beds in the garden, and another on using logs and closing with other pictures which were hard to group. Sometime in the unforeseeable future I will follow these three articles with more mushroom pages based on Paul Stamet’s book and the fantastic learning kickstart I got from this Guerilla House workshop. 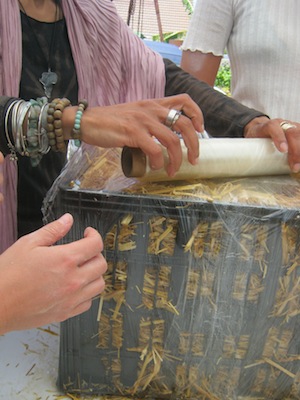 So I came away from the workshop with a lot of photographs, the Guerilla House manual on mushroom growing, Paul Stamets book Mycelium Running, suggestions on videos to watch, the taste of a great oyster mushroom stir fry for lunch lingering on the tongue and an oyster mushroom encased in pasteurized cardboard.

The learning curve at the workshop steepened as I opened my front door. The oyster mushroom in its cardboard cocoon, I was supposed to remove after 24 hours and then use the cardboard to inoculate another growing medium to make more spawn. I missed the part that I was to use the cardboard LATER, and not at the time of removing the mushroom !

When I lifted the mushroom the cardboard was traced with a reticulated pattern of white threads. The oyster mycelium spreading out from its invisible spore dust was aggressively colonizing the cardboard after only a few hours. Despite using disposable surgical gloves when tearing up the cardboard and placing it in jars of cooked rice, some gray-green mold has dogged the process, popping up its head whenever I think I’ve cut it off ! I think I know part of the reason now, after rereading the manual. 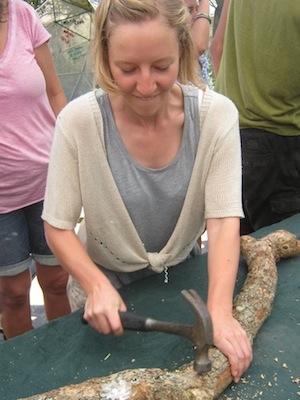 Guerilla House workshops are dense with information, and I ended up missing something important. I should have left the oyster mycelium to colonize a substantial amount of the cardboard, instead I tore it up when it was still vulnerable to competition. Once in the jars of rice, something white, the oyster mushroom no doubt, grew apace out from the cardboard, but so did blue gray molds. I had not given the oyster a chance to get a good ‘foothold’ before drowning it in a nutritious medium contaminated with competitors. However, after the mold in the bottles had grown for some days and the rice was bound up in mycelium, we unbottled it, cut out all the gray-green we could see, mixed it with fermented straw and packed it tight in a bag with some tiny airholes. Lo and behold, the culture in the bag is also 50% gray-green mold.

Things are in a liminal state of growth here with mushroom knowledge. Not least because Paul Stamet’s book, sent with Guerilla House’s free downloads just stopped me in my tracks and started rearranging my little knowledge ecosystem. I’m completely unsettled. The wood for the trees ? The mushroom does not grow IN the forest, the FOREST grows in the mushroom. I have been reading Mycelium Running for days instead of writing. I’ve been sharing stuff I’ve learned with an online friend studying innovative agriculture in Uganda. Excitement grows like exploding pinheads popping out of ‘rotten’ (a judgmental term I see now) wood.

We ignore fungi in day to day life. Fungus is a derogatory term in many ways. As with so many of the things we ignore, even despise, we do so because we are overwhelmed by or unconscious of and cannot assess an alternative explanation, or paradigm or reality or universe. 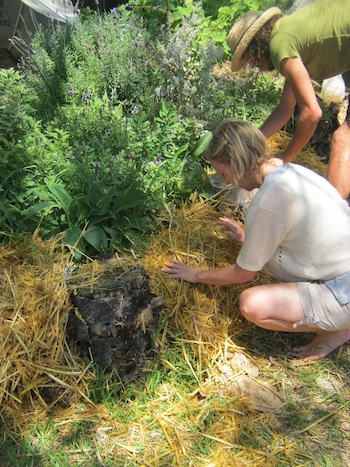 Taking mushrooms out there, planting them in the garden

Fungi are the bedrock of life, that’s it, not some strange and rare outgrowths found in dark quiet lonely places. Its hard to get the head around that one. They are the key to the concept I was searching for to explain fertility. The ancients should have built temples to the mushroom rather than the moon. They are the reason so much carbon needs to be put in the ground to create soil and save water. They eat carbon compounds, but also a number of things other micro-organisms can’t digest, from rocks to lignin and petrochemicals. They cannot be ignored, and yet they are. They could be used to keep tomato blight and fruit fly at bay. That is enough to blow my mind.

I’m surprised it took so little to make me not only a fungophile but mycomad. I’ve always thought such people were new agey and shoo wa wa and now I’m one of the tribe… oh dear oh dear… time to sit down old bid, and have a cuppa… mushroom tea ?

However, let us get away from Paul Stamets and back to the Guerilla House workshop. Move on to the album on spawn, or the ‘growing mushrooms on straw’ album or the one about growing oyster mushrooms on logs. The albums all go stage by stage through the process with annotated photographs, but there was so much to learn, I can't do it all justice with pictures.

home page for links to lots of information on natural gardening

vegetable gardening and tips on easy vegetables to grow

Quote - They could be used to keep tomato blight and fruit fly at bay. That is enough to blow my mind. End quote. If you mind hasn't been blown (up …