Carpobrotus edulis globally and in food gardens at the Cape 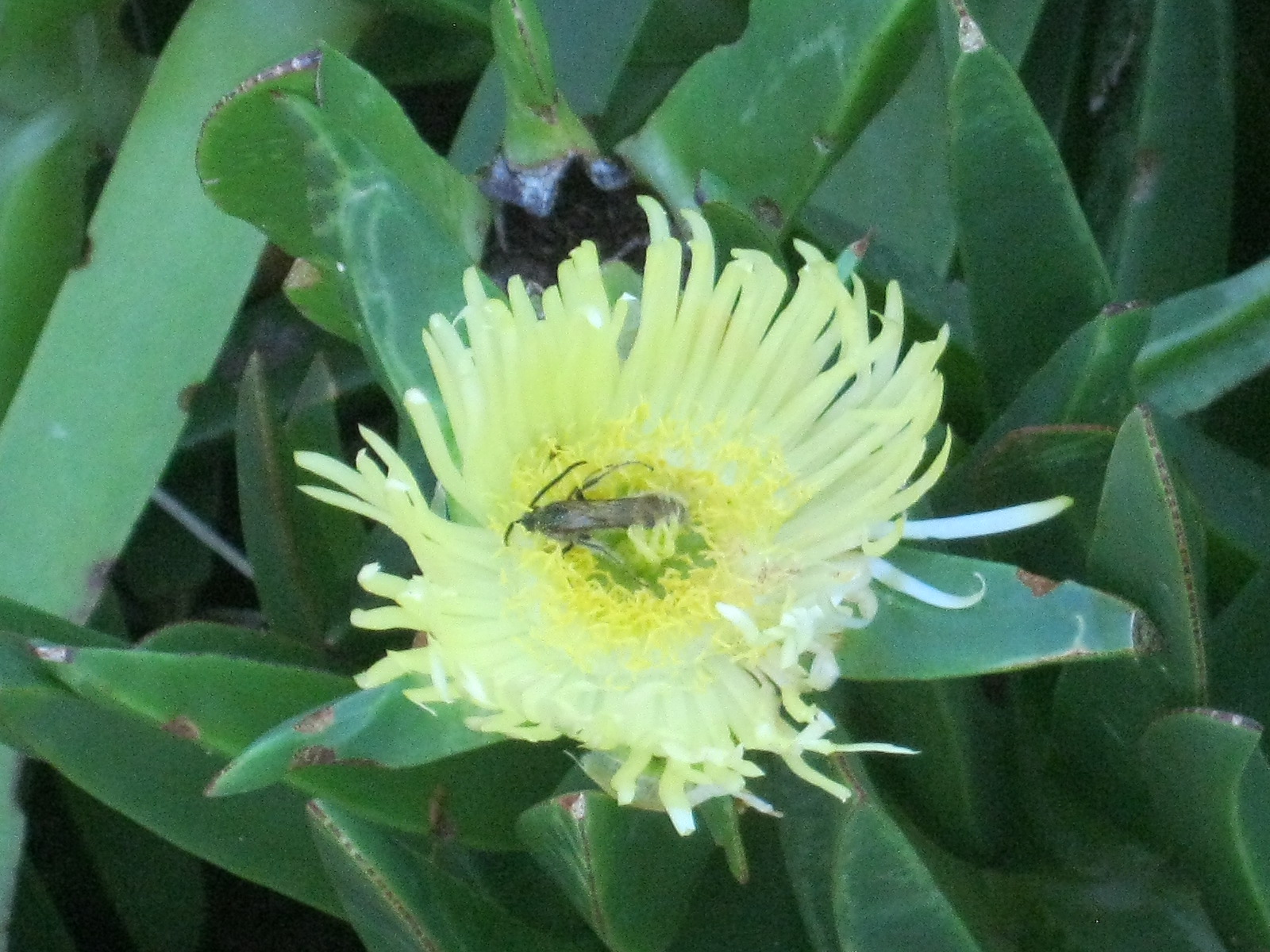 The mother of our South African edible plants, Carpobrotus edulis, cuts a very contentious figure globally. This tasty morsel in local cuisine is hated worldwide because of its invasive capabilities. It prefers Mediterranean climates and coastal zones, like those of its origin in the Western Cape of South Africa.

Planted in friendly climates far from the limiting factors in its original 'home' causes Carpobrotus edulis to wreak ecological havoc. This has occurred all around the world and I feel embarrassed or apologetic towards people whose lives are impacted. Then I have to remember, the local people did not take this plant to the places where it has become a problem. Many of the invader plants of the world were shipped around by the British and other colonial governments, and we'd have to delve into the history of each plant to find out who would have to pay the damages today. 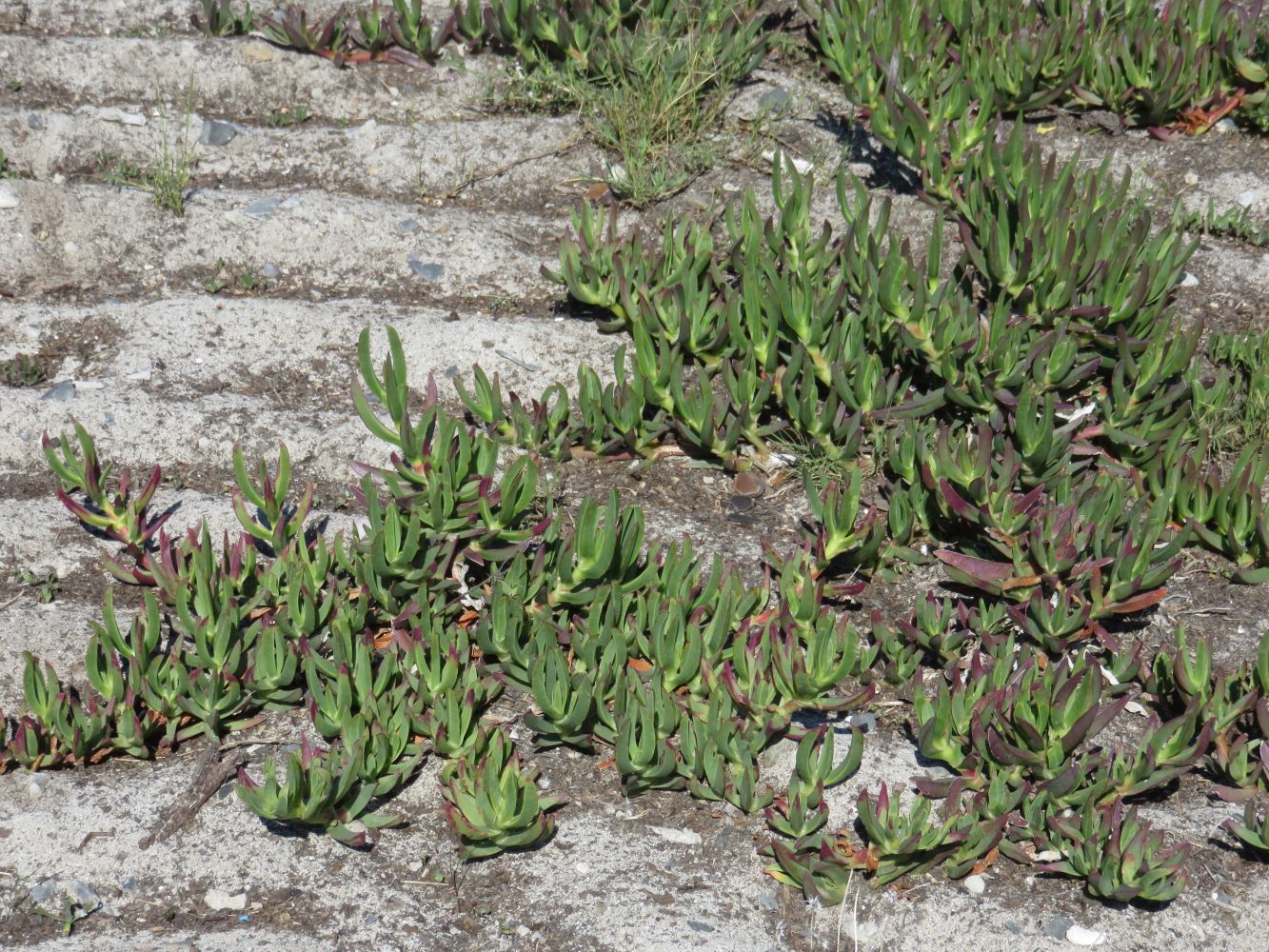 An arid road island in Big Bay, Cape Town. The sand is blown into waves by strong winds, and the reddish sunburned sour fig slowly spreads and stabilizes the sand.

Carpobrotus and Opuntia
when rootless

The story of this succulent has a parallel tale in another. It is useful to compare it to Opuntia or Nopal cactus known in South Africa as 'prickly pear'. Carbobrotus edulis has become a pest in many areas of the world. It invades large areas of disturbed land, hampers its recovery after disturbance and displaces indigenous vegetation. Similarly, Opuntia originates in Meso America but it is a declared weed in South Africa. It has taken over vast tracts of land in regions of South Africa, and yet very very few people in South Africa know that in its homeland in Mexico it is a staple vegetable, namely nopales in Spanish, which is quite delicious. We only know about eating the fruit here in South Africa, not about eating the green spoon shaped pads. 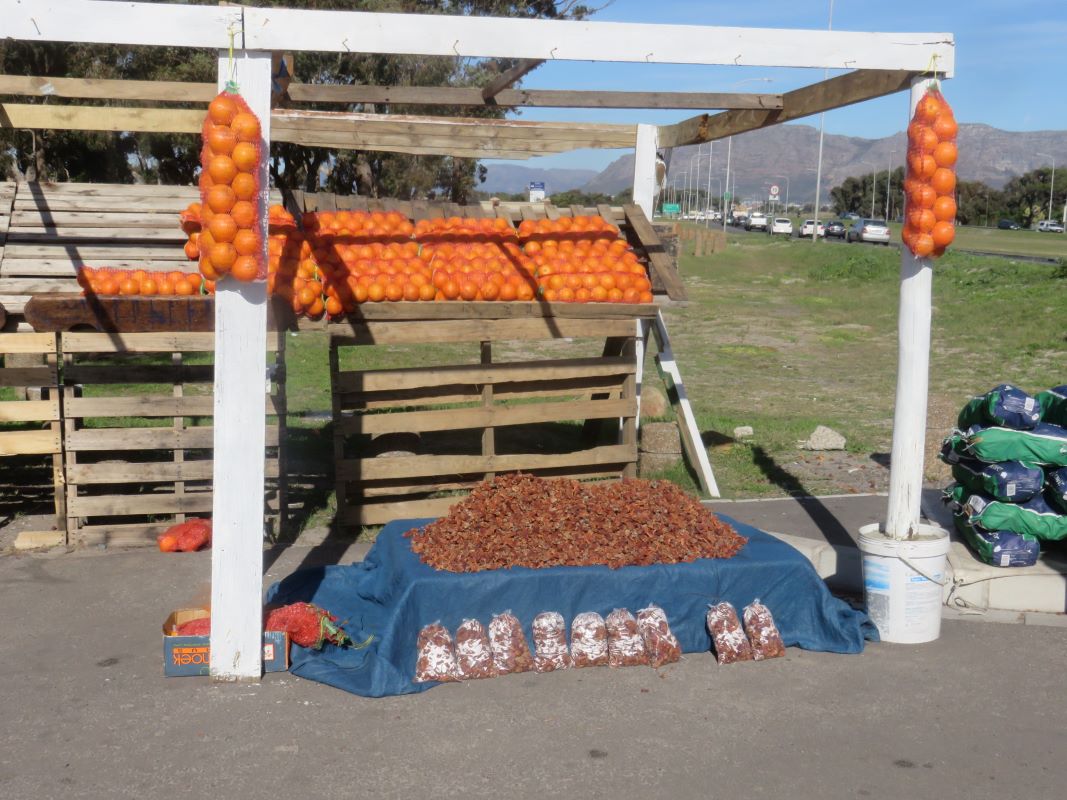 A fruit stall on the M5 near Grassy Park in Cape Town. There is a large sign advertising 'sour figs' which can be read from far off. At the stall is a massive pyramid of the dried fruit, and filled 500g bags.

Culinary use of Carpobrotus edulis in South Africa

When I read about Carpobrotus edulis and its uses, in articles written by Californians for instance, it is painted as a plant used for ornamental purposes or erosion control. The authors often seem to be unaware that it is edible, or that in its place of origin it is a marketable fruit sold by the kilo from fruit stalls and green grocers, and made into secondary products like Masala figs which are sold for about R15 or one US dollar for a tiny packet containing 5 fruits. 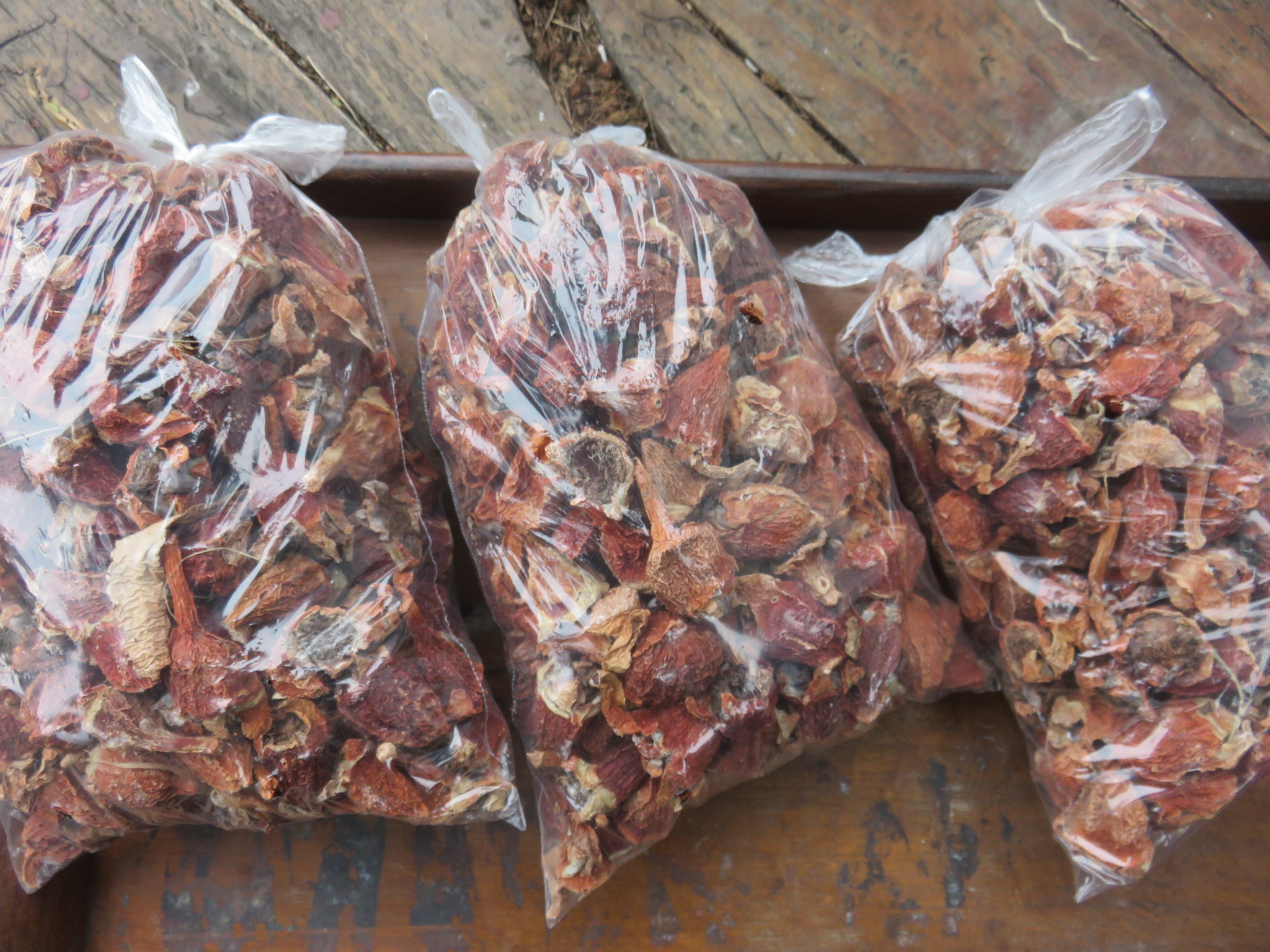 Masala figs are sold in specialty spice shops at the Cape. They are cooked in a syrup with curry spices. I put them on a par with chili chocolate as a gourmet 'sweet'. The green fruit or leaves are pickled by culinary experimenters like the indigenous food guru Loubie Rusch (MakingKOS on facebook). I can't describe the green taste of the pickle as it is like nothing else I've eaten. Perhaps a slightly salty cross of asparagus and nopales. 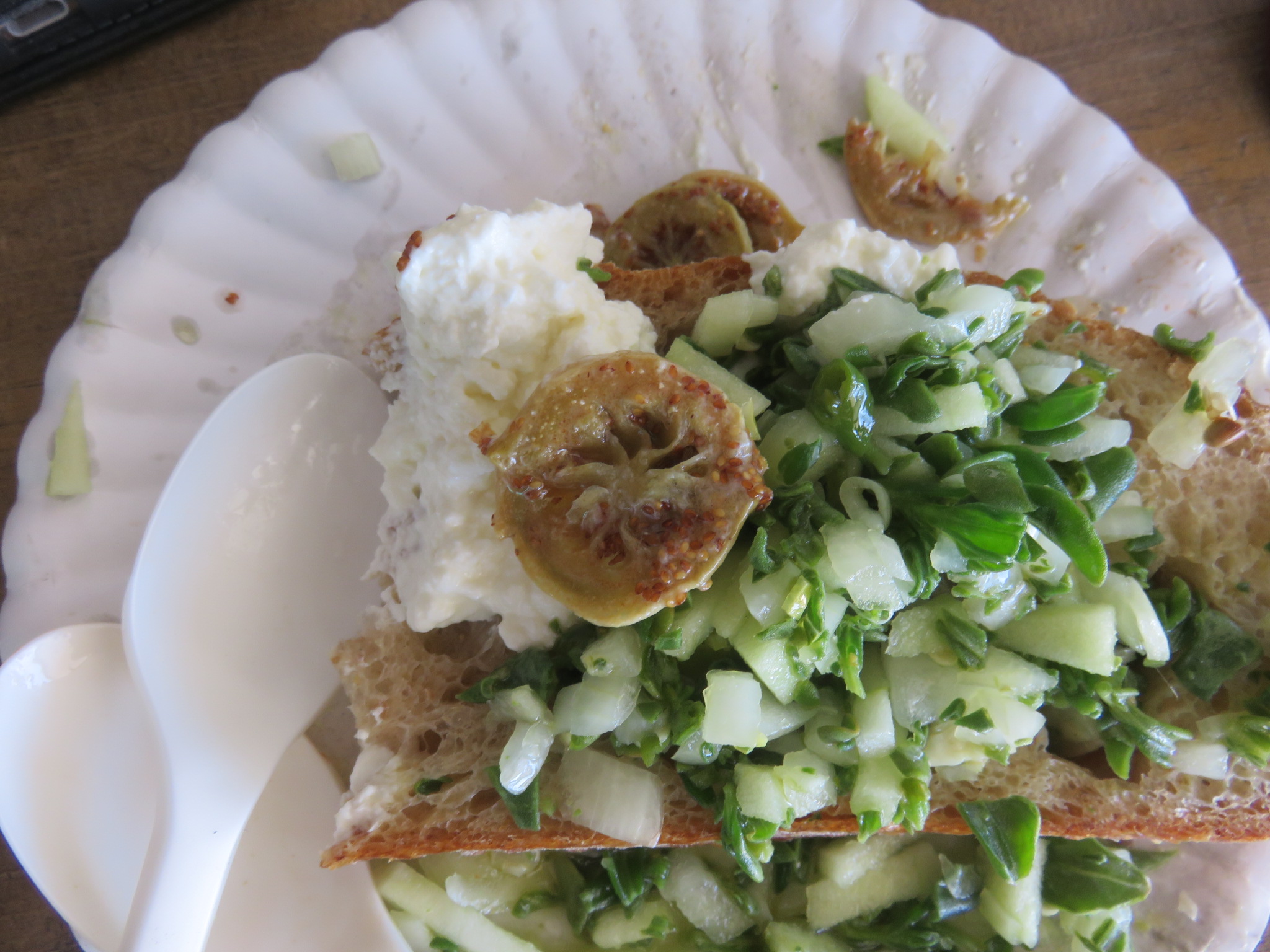 Traditional cuisine uses the fruit capsules of the sour fig dried and red-brown. Besides the heavenly Masala figs, there are chutneys, achars, jams and the like available all over the Cape made from these dried fruit. They are a part of our exquisite ethnic 'Malay' cuisine. However, Carpobrotus edulis was used by the indigenous people of the Cape for food and medicine, thousands of years before colonization. It is also a good source of anti-oxidants, see the link at the bottom of the page.

A 'fig' called many names

Because of this history, Carpobrotus edulis has many names. Khoi-khoi languages, one of which was the original language of the Cape, has left many terms especially for plants in local Afrikaans (a new language derived from a Dutch Creole). The Khoi-khoi and San lived here at the Cape for the longest time of any people and the knowledge of nature and plants embedded in the lexicon is awe inspiring as I found out looking at the Namagowab Lexicon in the dictionary by Haacke and Eiseb. This influence can be seen in Khoi-khoi derived names for Carpobrotus like guakum, gouna, or ghuna-vy or tkobo-vy. Dutch derived names in Afrikaans are suurvy, perdevy, Kaapsevy, and rankvy (vy is Afrikaans for fig). In isiZulu it is known as ikhambi-lamabulawo or mgongozi, in local English sour fig, or Cape fig. Around the world where it has become a pest, it has names like balsamo or patata frita in Catalan, or higo del Cabo, or higo marina in Spanish, figue marine in French, freeway iceplant, or sea fig in US English, and the derogatory pig face in Australian English. 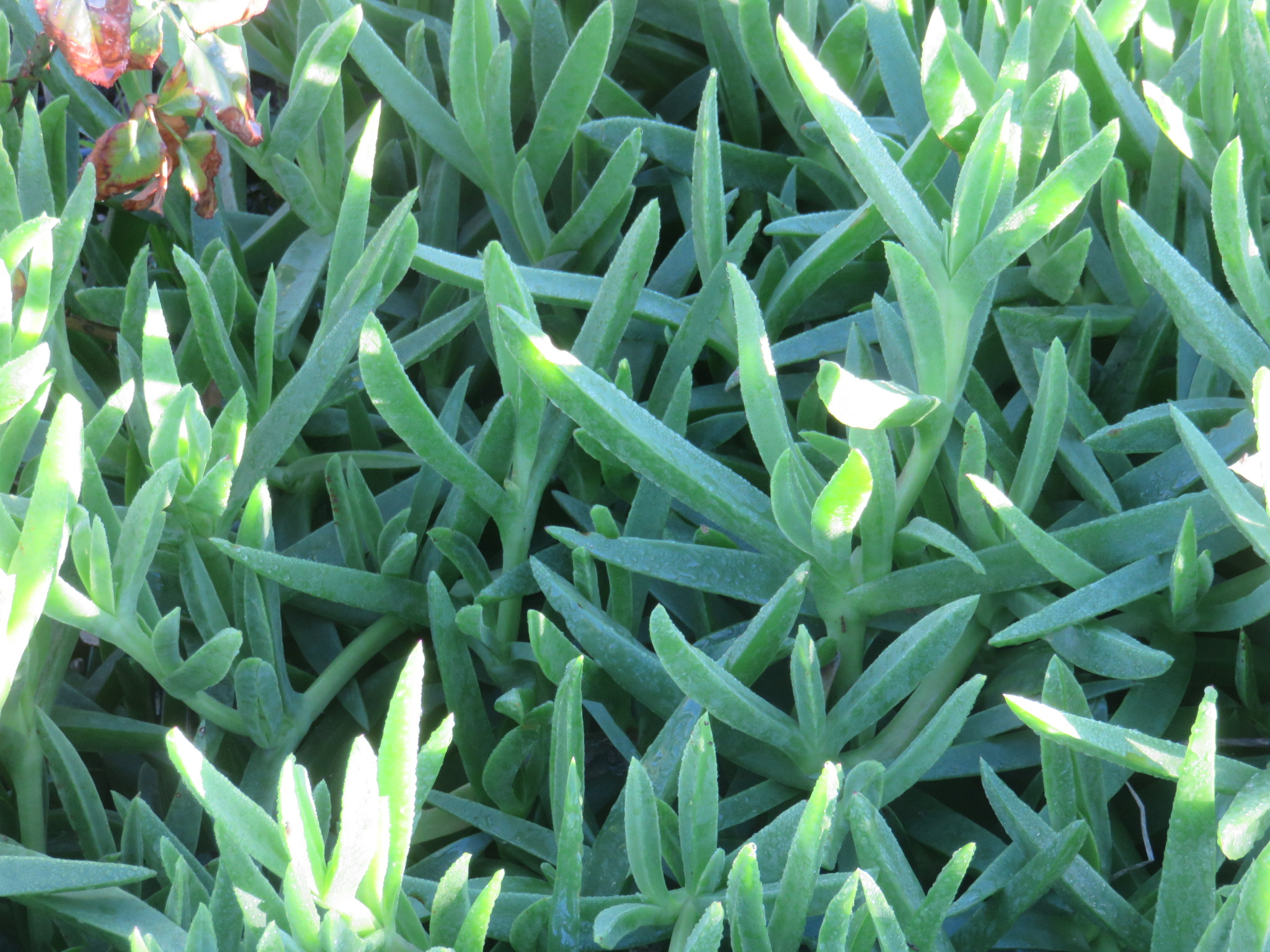 Other uses of Carpobrotus species

The University of the Western Cape has isolated phytochemicals in Carpobrotus species as part of testing the antimicrobial efficacy of traditional formulations using this plant. They and the South African National Botanical Institute have copyrighted the results of their research. Originating in Khoi-khoi herbal medicine and passing on to other groups in South Africa it was used in various forms. I will not go into details about the interesting medicinal recipes as they can be found in the copyrighted SANBI article here, and should be protected as intellectual property of South Africans with indigenous roots. 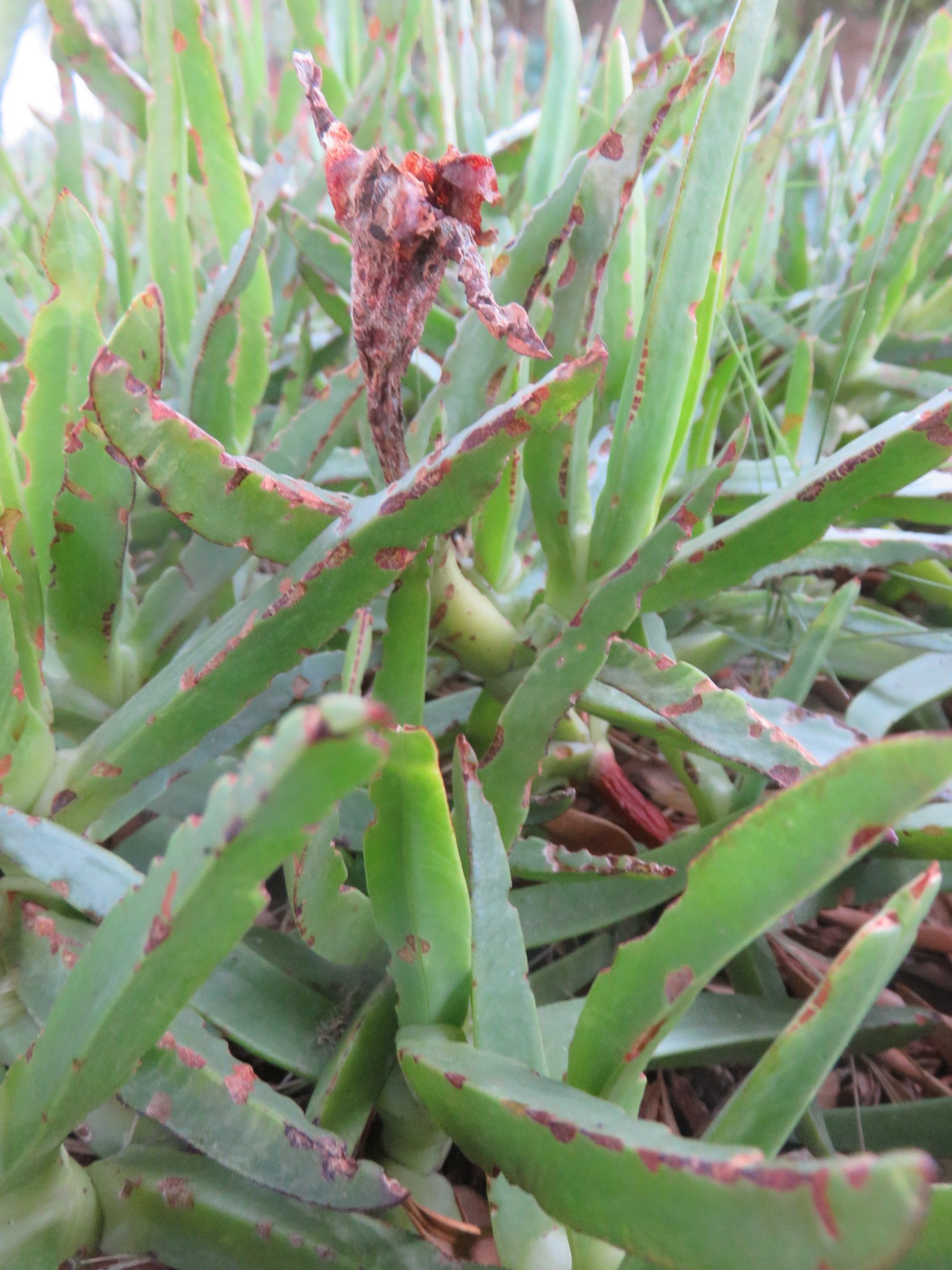 Carpobrotus edulis as a ground cover in a road-side planting in Plattekloof, Cape Town. It's been mercilessly gnawed by insects.

It would seem from its global invasiveness that growing Carpobrotus edulis should be a doddle. However I have not found it that easy, back here on its home turf. I made the mistake of planting it in a semi shaded area and it got a bristling fungus. Bang went my first attempt to have it in the garden. 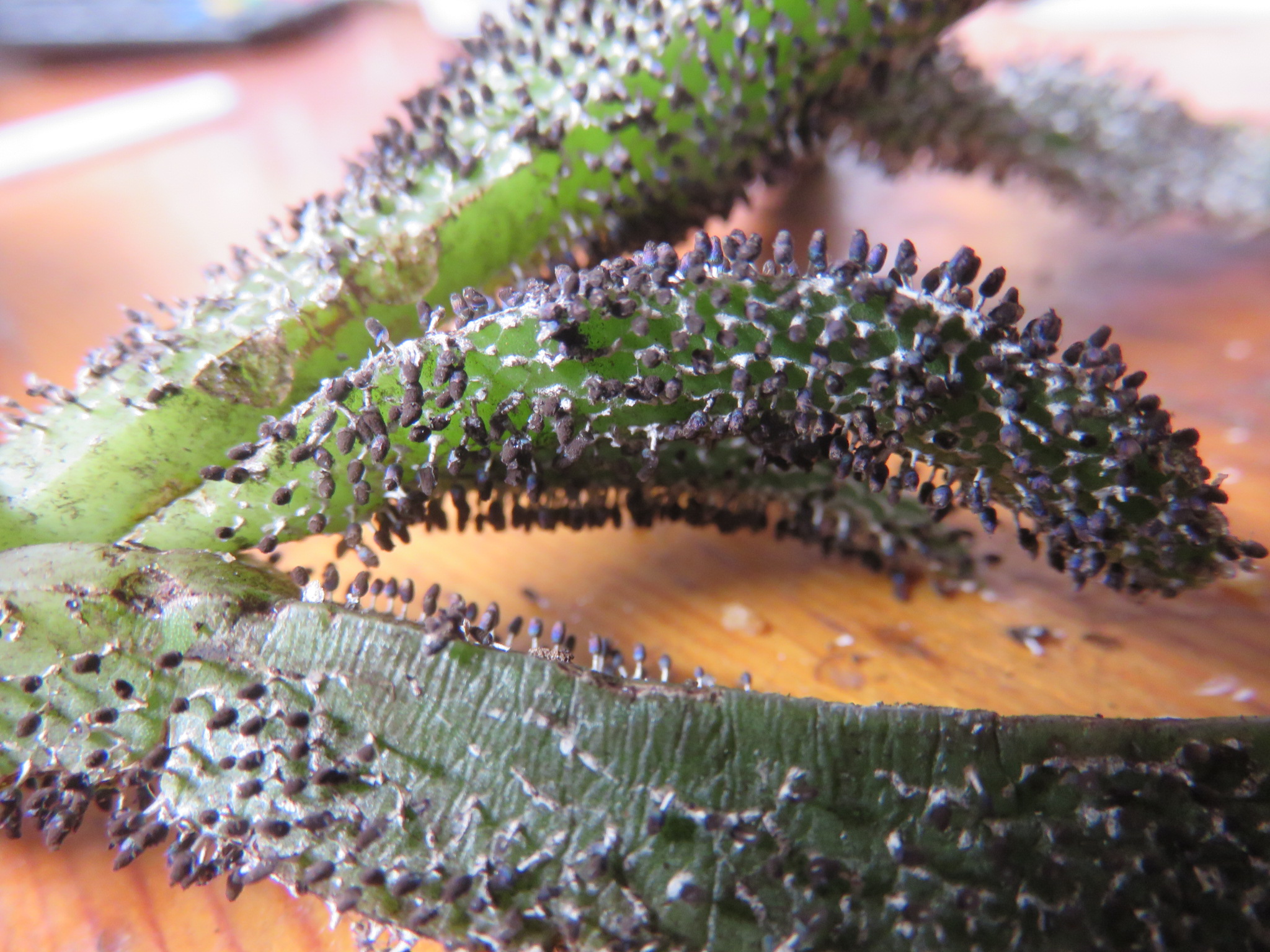 Carpobrotus from my garden infected with hundreds of tiny black mushrooms that wiped it out completely.

Carpobrotus edulis doesn't just grow where you throw it as some people claim. I have to pot up rooted cuttings taken from a clump of Carpobrotus, and then water them regularly and I still lose about 50% of my plants. Sour figs can also be grown from seed, and they get off to a really slow start this way, which is why I use rooted cuttings. They need to be planted out in a very sunny area, as they are sun loving plants by Cape standards and our plants are really used to a lot of sun by Mediterranean standards. However it seems happy with quite poor, well draining, sandy soil, and takes about 4 months to get going in summer. They are not frost tolerant at all. 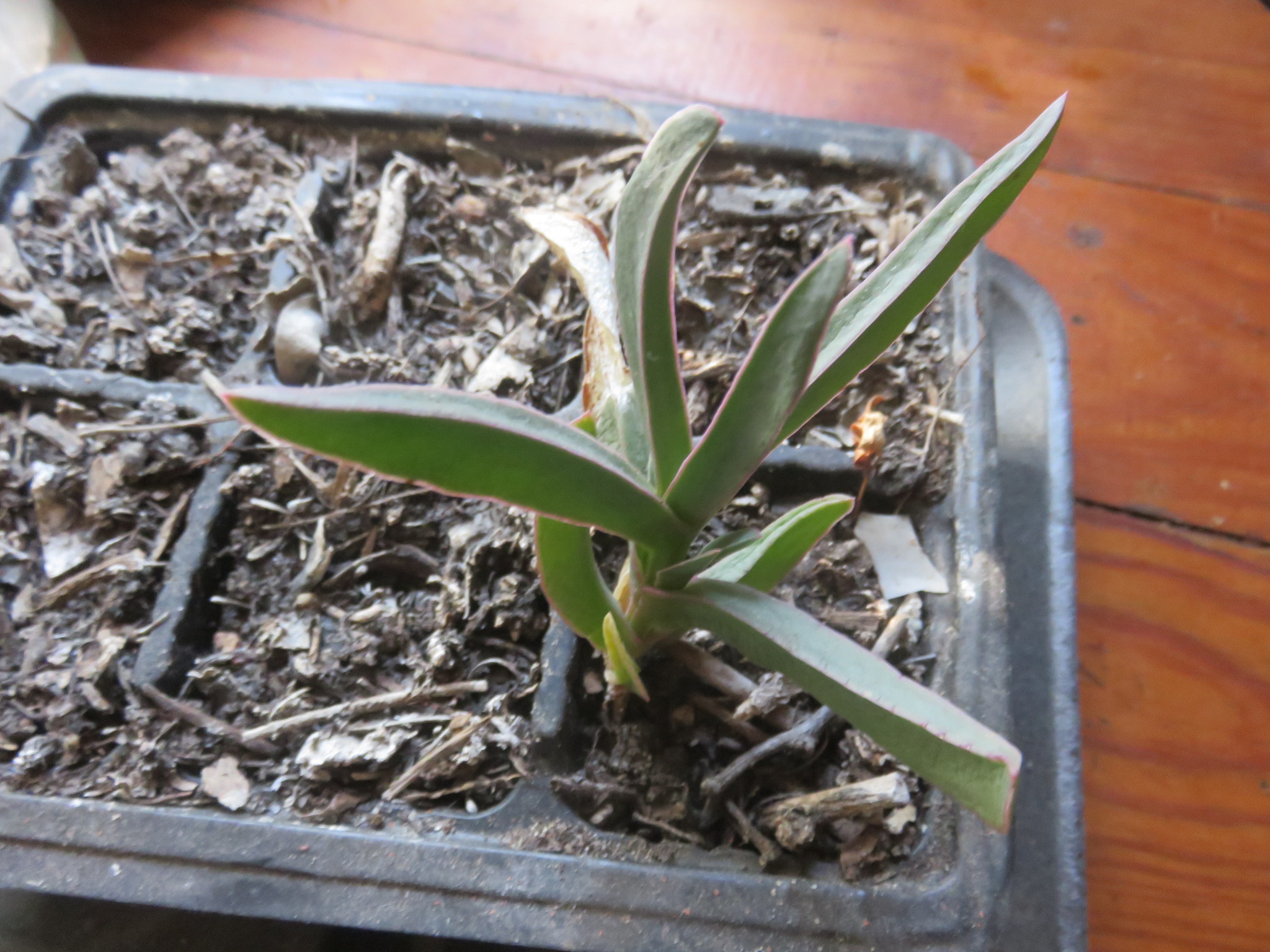 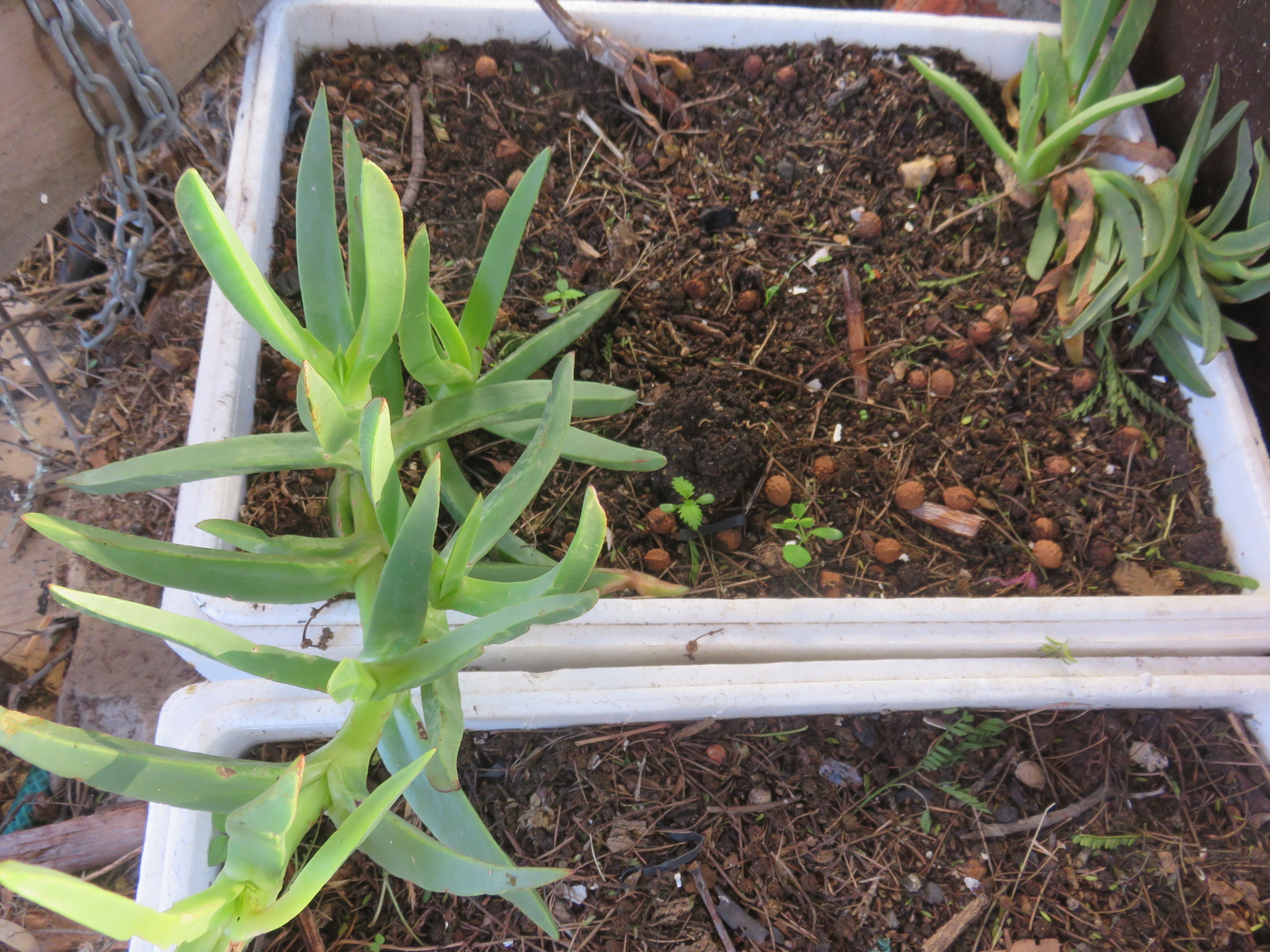 I took ready rooted stems, planted them in these trays and then pots before planting out in my garden, but that may be overkill.

As a Kaapenaar or Cape denizen, I naturally find this plant a must-have in the garden. There are many reasons why. I'm focusing on perennial food plants and I culture indigenous perennials wherever possible. I'm forming a collection of growing instructions for perennial food plants in our climate. This will be perennial food plant number 17. The reason for growing local food plants is that they are hosts for a number of local insects and worldwide we are experiencing a catastrophic loss of insect and other species that exceeds the great extinction of life on earth that put paid to the dinosaurs. This time it is not a meteorite which plummeted into the earth, but loss of habitat caused by human activity which is the cause.

Insects can often be very host specific, so when the host plant disappears a cascade of insect extinctions can follow. The insects tend not to follow host plants over the oceans, so planting indigenous flowering species is always a good way of encouraging insect diversity. 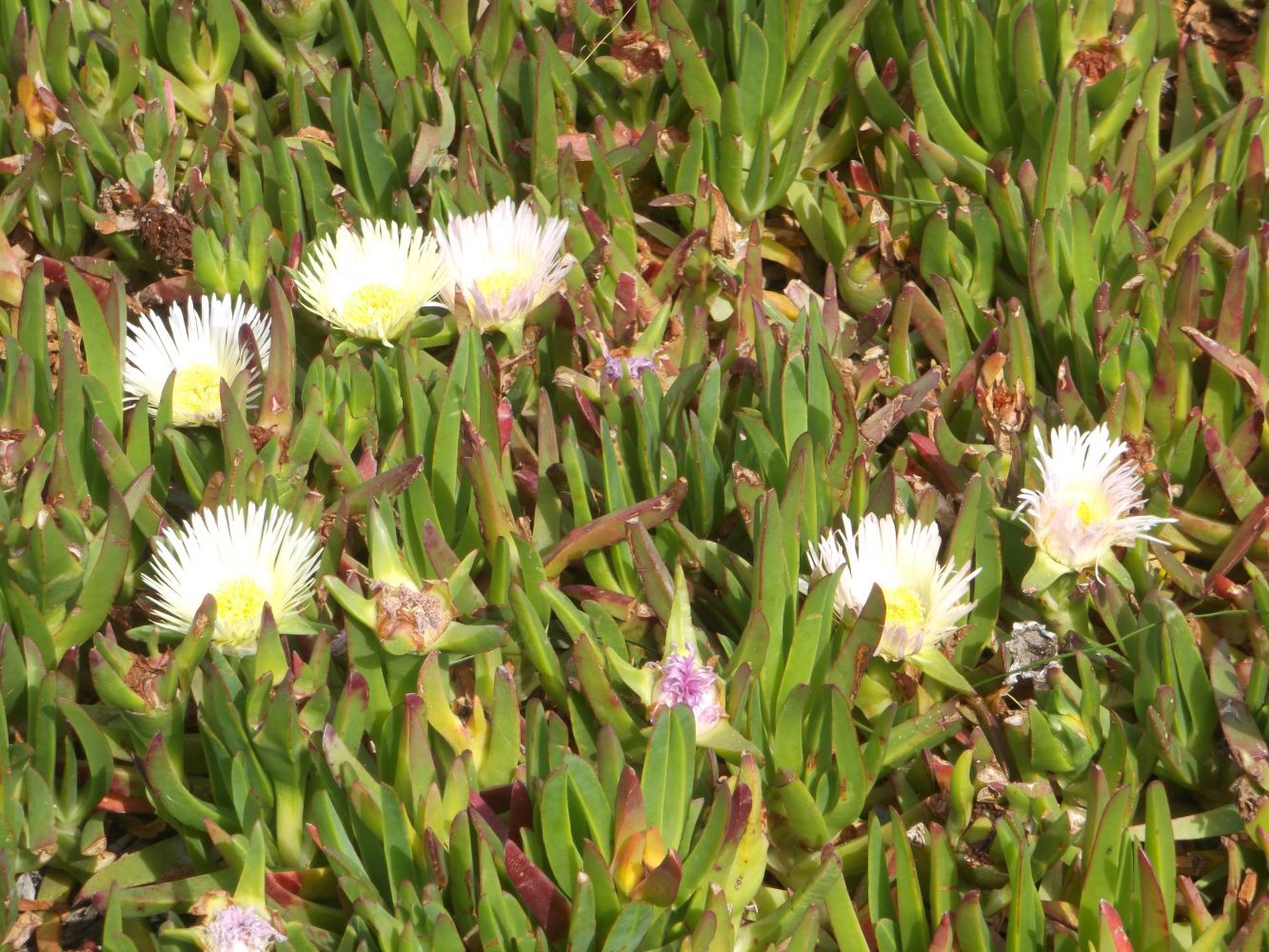 Locally the plant tends to look a little sunburned and scarred by insect herbivores, and 50cm thick blankets are not common here.

Carpobrotus edulis isn't on the red data list, but it is pollinated by carpenter bees, solitary bees, honey bees like our endemic Cape honey bee, and a host of beetle species, so its a good foundation for an insect friendly garden, supporting biodiversity. Many South African insects are not classified and there are fears that they will become extinct without ever being collected and recorded.

The sour fig makes a lush green lawn replacement or ground cover here, but in other areas of the world it forms mats up to 50cm thick that can blanket over local dune scrub and wipe out indigenous vegetation. Wherever you live in the world there are bound to be lovely native food plants and I'd encourage cities and individuals in other Maritime Mediterranean climates to grow some of those instead of Carpobrotus. 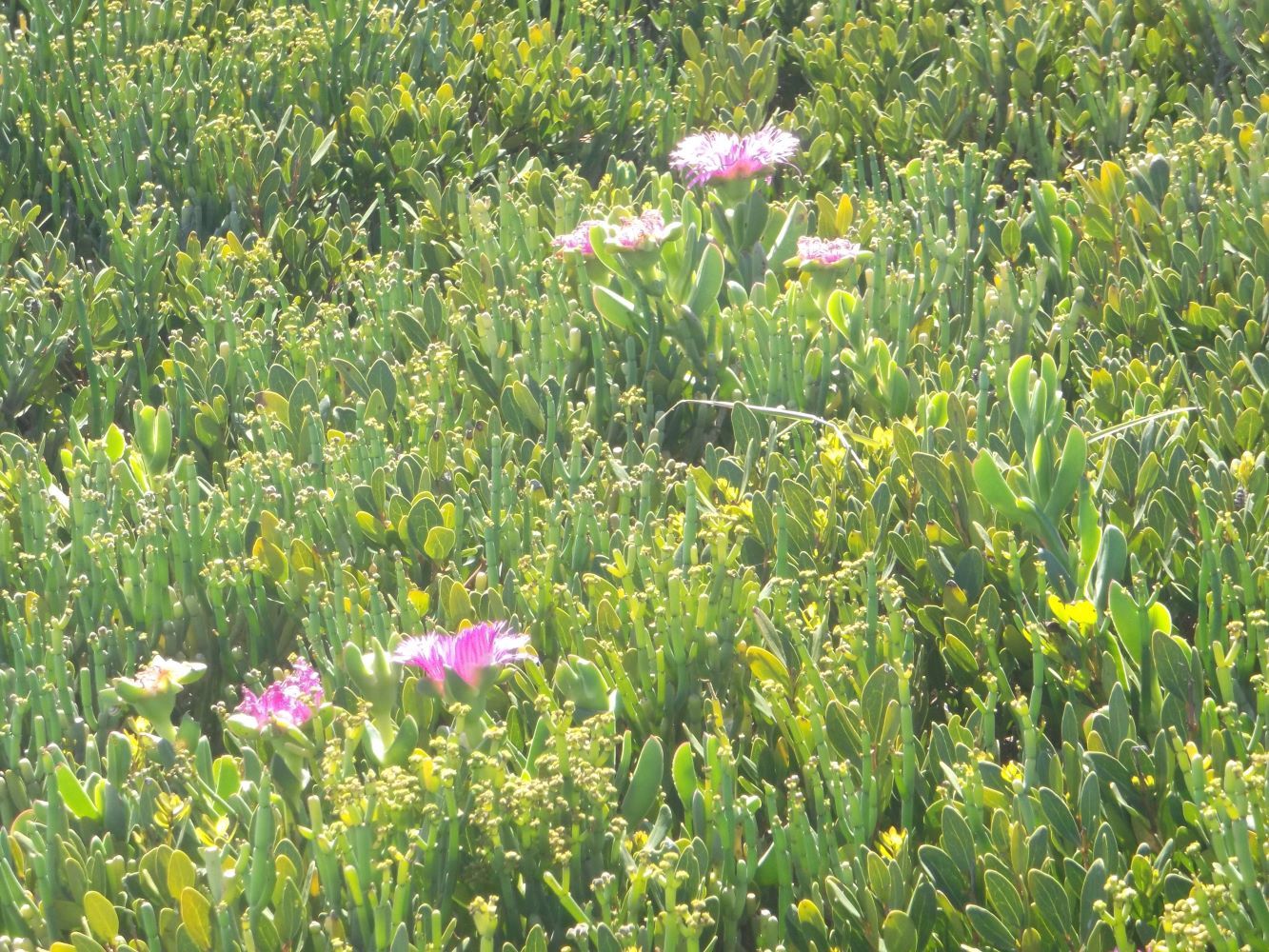 Carpobrotus deliciosus? growing on a dune near Haakgat in Cape Town in harmony with other plants like Euphorbias and Euclea.

Planting locally indigenous plants is often a way of avoiding invasiveness, as the plant is still surrounded by local fungi, bacterial diseases, and insect herbivores which have known it for millennia and are adapted to devouring it or parasitizing it, and this keeps a dangerously vigorous plant from hyperbolic growth. However, if you have invasive Carpobrotus in your area, remember the leaves and fruit can be used green to make pickles and the dry fruit to make sweets, jams, achars and chutneys and lovely savory additions to curry in place of dried fruit. Back to the sister plant with the same problem. If all South Africans knew how delicious Opuntia pads were, the invasion of prickly pear could perhaps be slowed down, and perhaps so with Carpobrotus in other areas of the world. Taking plants out of their ecological context can be so harmful. But so can taking them out of their cultural context where people have exploited them and kept their populations stable, into a context where no one knows about their culinary or medicinal use. A pity, because with these two problematic succulent plants a solution may lie in extensive foraging my humans. 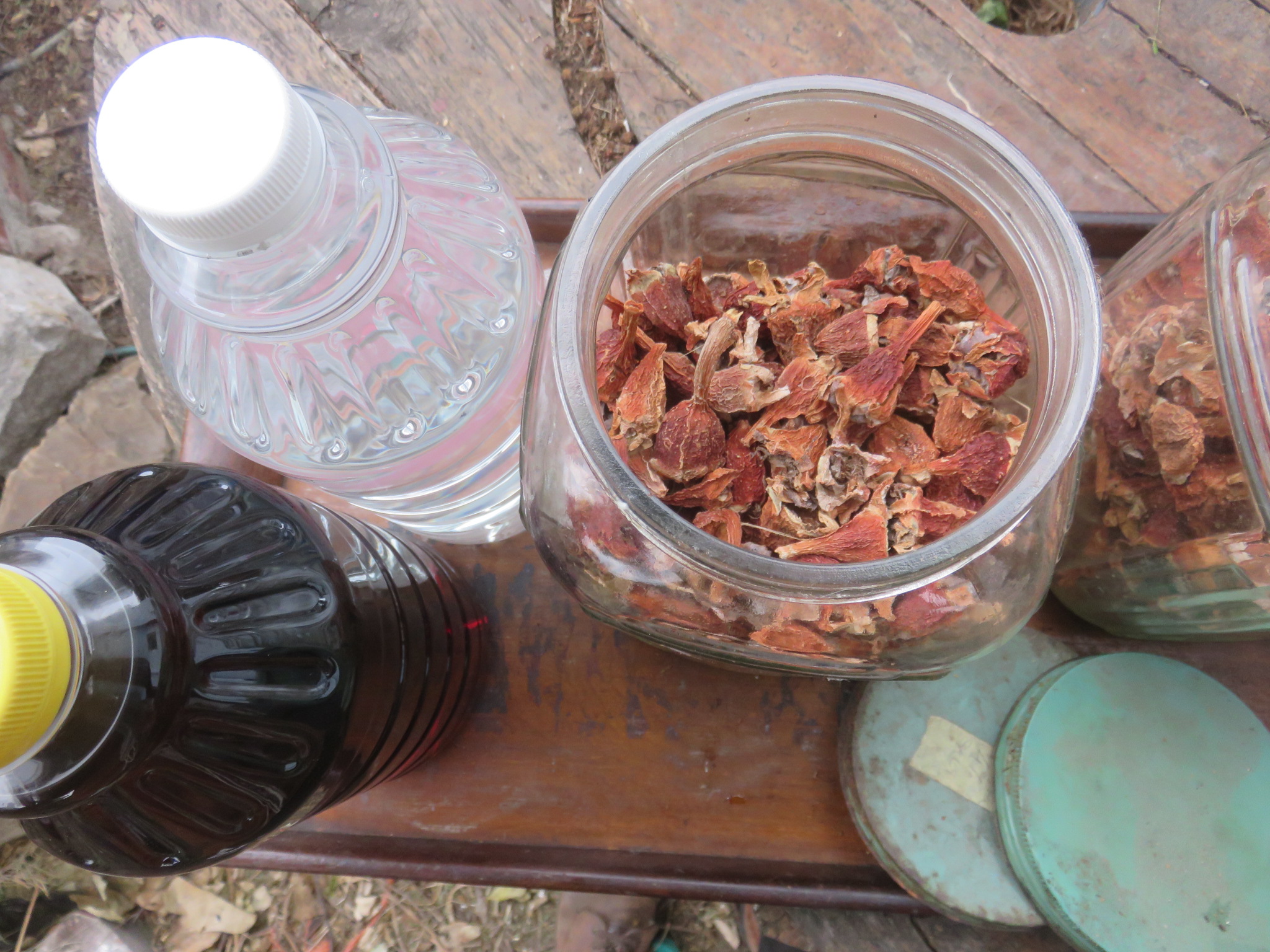 My attempt to rehydrate and pickle the dried fruit in vinegar to prevent them drying out completely when past the season. The mouth puckering pickled fruit can be added to curries.

Many South African berries are a potent source of anti-oxidants