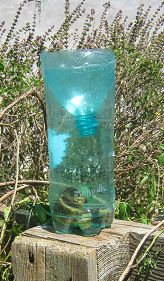 In this section information found in research on organic fruit fly control is included in which baits, home made and commercial, poisoned traps and insecticides are used to combat fruit fly. I’ve outlined alternative methods, such as exclusion, sanitation and selection, biological controls and garden diversity in other articles. Thus the previous three articles on fruit fly control offer poison free methods, which can also be seen as organic fruit fly control, but I thought it necessary to explore what the world of commercial products includes under 'organic' at this, the chemical using end of the organic control spectrum. My chief concern is for the protection of beneficial organisms. I feel very uncomfortable even discussing poisons. I avoid them entirely and would rather lose my crop than use them, but then my vegetable garden is not my livelihood.

I am so concerned because I’ve noticed the reduced numbers of bees and birds in two areas of Cape Town (Goodwood and Rondebosch) over the last two decades. The disappearance of bees could be due to the spread of the American foul brood disease which has impacted world wide and has decimated local hives and bee based business. It could also be due to increased use of chemical controls in local parks, sports fields and private gardens, and the removal of hives because both Goodwood and Rondebosch are densely populated residential areas. I have not noticed a shortage of bees in Constantia, where I’ve been gardening weekly, an area with very large properties of up to several acres, where many landowners keep hives. Regarding birds and bees in Goodwood, numbers and diversity have probably been lost due to a loss of habitat with the gradual paving or cementing over of most garden surfaces (up to 90% in each block) and the felling of street trees, both of which I’ve seen increase over the last 20 years.  In Rondebosch I doubt that bird habitat has been lost, if anything gardens have grown lusher and more extravagant over the decades. There are greater expanses of perfect lawns, and no shortage of rampant consumerism. It is an area where people often defy water restrictions. I suggest that, if you can waste drinking water like this when other people in Cape Town are going without during a drought, then you probably don’t care about the poisons you spray in your garden either, and you certainly will not bother to discern between bee-safe organic fruit fly control methods and greenwashing, and through this bees are being killed and the birds are eating poisoned insects, fruits and plants and it is affecting their reproduction and longevity.

When using poisons and traps to fight against an infestation of some garden pest, a danger to beneficial organisms arises as most poisons and traps can also eliminate bees, spiders ants and other insects as they are often non specific poisons, and non specific trap types. This can kill your pollinators, the bees, and also throw your whole garden eco system out of whack by removing the predators of your pests which would normally increase in numbers in response to increased pest numbers, and exert natural biological control. The next year you will need more poison to keep the same pest down and so it goes in a vicious spiral. 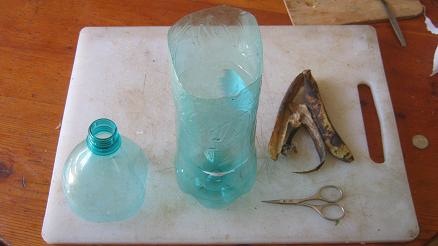 the materials needed for a home made fruit fly trap

The organic commercial products available for fruit fly control in your country may include some of the following items:

Sticky strips: You can hang yellow sticky strips, (on which notably, any small arthropod such as spiders and wasps would also get stuck and die) two per tree in trees up to 2 metres high, for taller trees more strips can be hung out. Bait the strips with 1:1 ammonia to water, or commercial fruit fly attractants. You can monitor sticky traps and fly traps for early detection of a rising fruit fly population. These should be in place by late winter where they can easily be checked.

Borders can be planted which attract fruit flies as shady resting places in the summer heat. These can then be sprayed with poisoned bait chemicals, basically a mix of protein attractants and insecticides that can kill any insect, bees included. The fly bait GF120 used in Hawaii is highly toxic to bees. It is made of spinosad, sugar and corn proteins. A poison claimed to be selectively toxic only to fruit flies and not to to other insects is SureDye.

Chemical lures remain the chief commercial product in fruit fly combat. This is especially true in South Africa where there are few alternatives on the market. Thus commercial products such as organic fruit fly traps which use specific odours to lure flies to a poison trap, and which do not involve any chemicals coming into contact with your food crops are available. Some use sex pheromones to lure the flies. It will all depend on the species you are trying to combat as their attractants differ. The attractants are relatively specific to the pest. Some of the traps are also non toxic.

However the proportion of other insects a fly trap may catch is staggering, especially in ‘home made’ traps. Thus what seems like a more natural alternative are traps containing fermenting bananas or pineapple in water, in bottles with narrow openings from which flies do not find their way out, and drown. But other small insects will also be trapped in these. In a range of home made traps fruit flies were found to be only 1-2% of the insects caught. It is also said that female fruit flies will not enter traps.

When making traps that also attract bees, such as those charged with apple cider vinegar, one is taught to place cling-wrap over the vessel and puncture it with small holes. These are tiny entry holes. You are told to make them big enough for fruit flies but too small for bees and wasps, but some wasps can be smaller than fruit flies (Chalcid wasps may be under 1 mm in length whereas the average fruit fly is just under 1cm) so this is a feel good effort, and not a real solution. Spike the vinegar with oil or soap to decrease the surface tension, to drown the flies more easily.

Many of the organic insecticides for fruit flies are mixed diatomaceous earth and pyrethrin products. Natural pyrethrins are extracted from the flowers of a certain type of chrysanthemum. They are highly toxic to fish and in mammals, including humans, they can have neurotoxic effects.

Some of the above preparations may also contain piperonyl butoxide, a poison that causes irritation to humans. It may also be a carcinogen. It is used to increase the efficacy of other insecticides even at low doses, is moderately toxic to a number of aquatic animals, and has low toxicity for mammals and birds. It  is not acceptable in products advertised as organic.

Other poisons discussed below may also be found under organic fruit fly control. Rotenone is used as fish poison and insecticide. It is a powerful neurotoxin that induces Parkinson’s disease in lab test mammals. Rotenone's status is not identical in all organic certification systems.

Spinosad is an organic insecticide made from bacteria extracts. It is a moderate irritatant to humans and moderately poisonous to some aquatic animals, deadly to eastern oysters and to bees.

Cypermethrin, a synthetic pyrethroid, and thus having neurotoxic effects on humans after chronic exposure, is classed as a ‘moderately hazardous’ chemical, yet is used in organic fruit fly control.

Neem oil is used as a spray for organic fruit fly control in India quite effectively. It is poisonous to all insects when ingested, and once dry, does not transfer to insects by contact. Thus it mainly affects insects which eat the sprayed leaves and these are commonly pests, and has little effect on bees except in very high concentrations sprayed on flowers, nor does it affect butterflies, spiders and the parasites of leaf eating insects. However the oil can poison by contact while still wet, and will smother any small creature you spray with it, so it should only be sprayed when beneficial insects and other arthropods are least active, such as in the early morning and evening.

Reviewing all the poisons used in organic fruit fly control, I have to say that personally I do not think that a poison made from an organic or natural substance justifies its description as organic, when it is poisonous to bees and reduces insect diversity. A lack of danger to bees and consideration of the global loss of bee numbers and species and the danger this presents to our future food security should be incorporated in the ‘organic’ description.

home page for links to many topics in natural gardening