Here are some bed preparation hacks used in urban permaculture that I learned working as a volunteer under Imraan Samuels. I watched with admiration as he turned whatever materials he could find into the foundation of a

green paradise. Adding a few hacks of my own, I used what I had available free of charge to prep a bed roughly fifteen metres square for my husband's seedlings.

After attending a wonderfully rich two week PDC course offered by Alex Kruger and Tahir Cooper, I knew that I had to contour the bed a little, because it sloped towards the wall, and I constructed the paths to contour roughly and prevent too much run off from the beds. 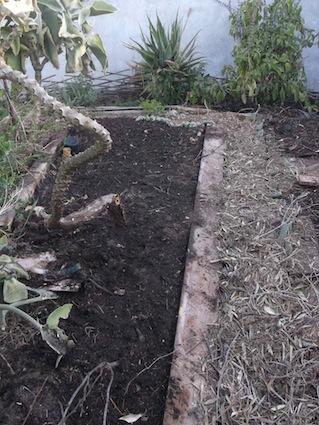 Can't wait to apply the hacks I learned doing a Permablitz

Below you can see the broad path pattern, as well as one of our worm-bins in the corner, housed in an old bath. Its perfect for worms, drains slowly from the plug hole, and is covered with a board and old carpeting, to prevent drying out. Worms dislike or die from heat, dryness and smelly gases. We feed this bin mainly with kitchen scraps. Cultivation of worms is highly recommended for the vegetable grower. Vermicast improves germination and soil quality and fertility. 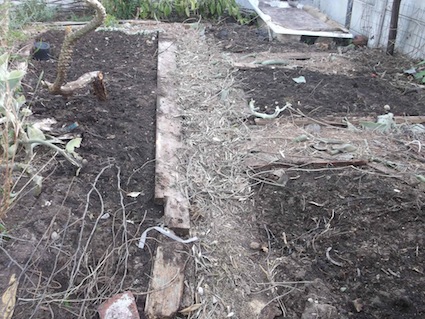 BED PREPARATION hacks IN URBAN PERMACULTURE CAROLINE STYLE: THE PATH IS DESIGNED TO SLOW RUNOFF TOWARDS THE WALL.

First I pulled up or chopped off the waist high nettles and threw them on the ground, then I forked up and ripped out the Fynkweek, a fine leaved short indigenous grass that has underground runners. I put this grass in a bucket and will later turn it into green manure to utterly destroy its amazing ability to propagate from dried up fragments. Then I applied the first of the bed preparation hacks I had learned from Imraan and Saudiq. I covered the whole area with cardboard. Apparently it contains minerals that sandy soils need and also keeps weeds and evaporation down. Next I applied my own bed preparation hacks. I covered the

cardboard with fork-fulls of compost I had made from sweepings under the Acacia and Olive trees, soaked in urine and rotted for a few months. The rotting urine soaked sweepings I had of course started preparing months before, during winter. This rough compost layer was patchy and about 5cm deep on average. I laid out paths marked with old lumber from the garage that had wood beetle or dry rot. The paths were covered with giant Kalanchoe leaves and sprinkled with dry Acacia sweepings, and the beds topped with another 5cm of vermicompost, and then watered in. 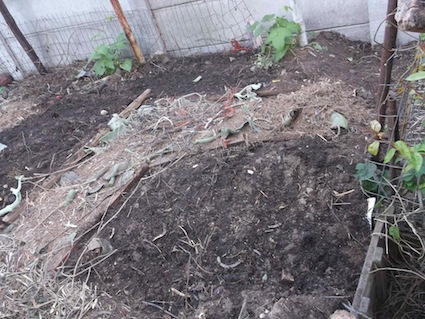 Bed preparation hacks get the grind over quickly

the corner of the bed against the vibracrete wall. you can see the bean and cucurbit companions planted by each pole of the trellis constructed a few weeks ago.

I've compiled a list of the seedlings and established plants in this area to try and group them into companion plantings:

At a recent Guerilla house - Langa Rastafarian Community workshop in Langa I saw sunken beds. I asked about them and Josh told me they are water sparing. So I decided to sink the beds I'm building for the summer of 2017-2018, due to the threat of a very bad drought. The previous setup had sunken paths and slightly raised beds, which tend to drain better and get dry. I used the bed preparation hacks

I've learned, lining the beds with cardboard to suppress weeds, conserve water and add nutrients to the soil.

home page for links to gardening tips, and useful tips for the eco conscious home-owner

gardening with links to lots of information on water saving

one of the best worm keeping websites in the world