an introduction to waste:
its problematic nature 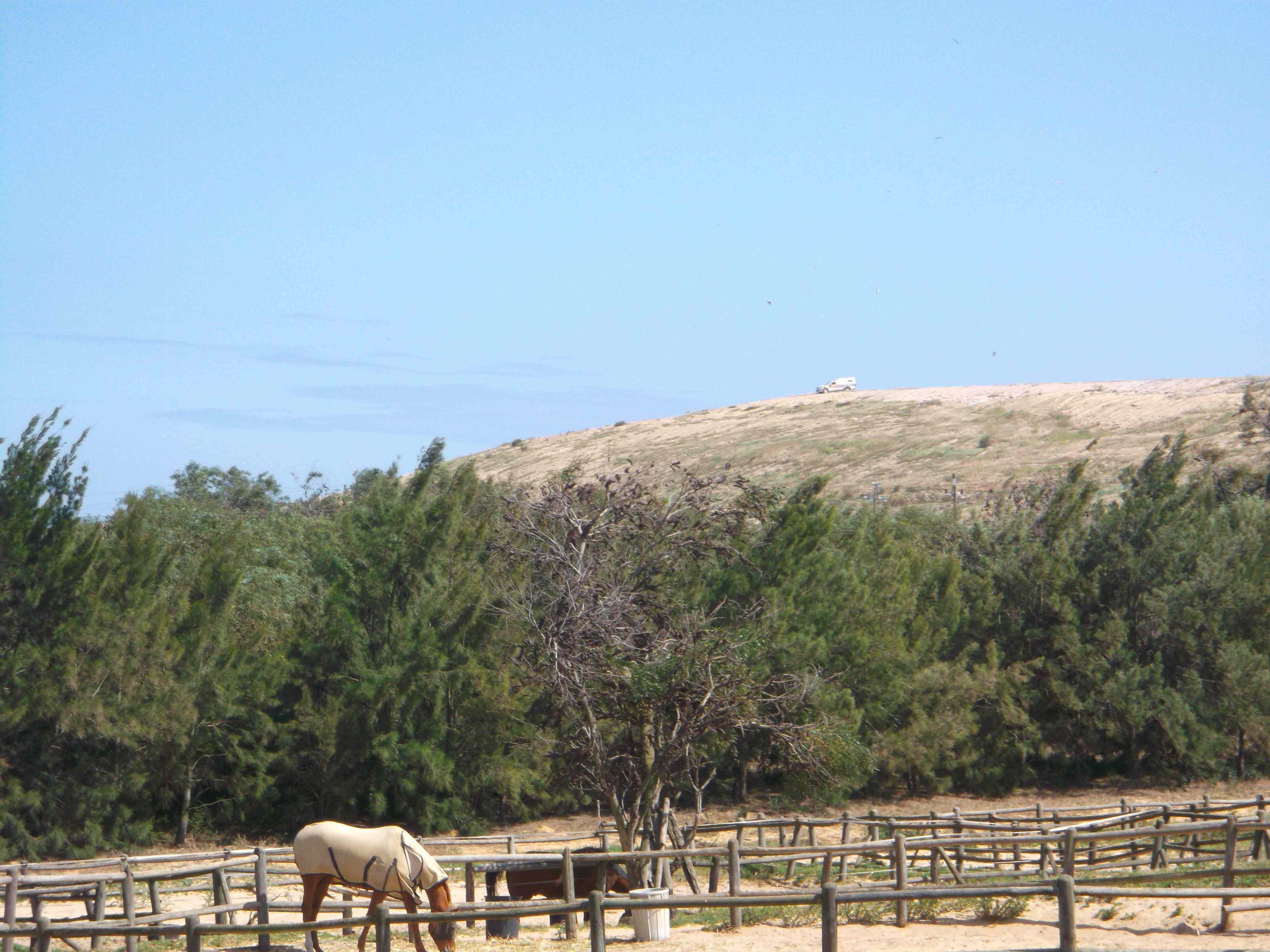 an iconic picture, a new mountain I discovered at the age of 56
beyond the mounted police farm is a landfill site reaching high into the sky

the problem of waste:
its complexity

The series of articles on the complex problem of waste needs to be approached with an introduction. It is a complex problem in any country because it is not only (here we come back to language) a noun but a verb. This has profound effect on our thinking. We label things as ‘waste’ the noun, and it blinds us to the fact that by so doing, we are exercising the verb, wasting what could be a valuable resource. It is complex because of the shifting of costs of production and disposal between governments, industry and the consumer, and this differs from country to country. It is especially complex in this country because we are not prepared on the whole for a complete change in patterns of consumption, and so much ground work has been done and needs to be done. In my area, Goodwood, if you ask not to get any bags at the checkout counter, they look at you aghast and then give you bags anyway. You then have to go into this long story about why you don’t want bags, every time. Nonetheless, what I say makes sense to the people I speak to and they seem genuinely interested. They have just never heard of anti-waste principles before, and management is under no pressure from the populace in this area to sensitize and inform them. And we are reputed to be a ‘middle class’ suburb, but we’re just too far from the hip zone to have heard of eco concerns, or know too little not to dismiss them with contempt. It is also complex because I think I’m a perceptive person, and I’ve been obsessing with letting nothing get to the wheelie bin for decades, and yet I missed something very important. The mistake I’ve made was kindly pointed out to me in response to my writing by a person very active in the eco NGO sector in South Africa. I’ve been focussing on the little bit I could do with the stuff that comes into my home, and I’ve got to  the point where I only put out the wheelie bin once every three months, noticing that plastic reached this end in the greatest quantity, and how frustrating it was to take in unwanted plastic, but it seemed an immovable fact. I also walk around grimy and people treat me badly because I don’t wash my clothes often enough, because detergents aren’t properly biodegradable and washing machines use even more water than toilets. I go to the toilet in a little black bucket and feed it to the earthworms, who do a damn good job of vanishing it quickly, and I avoid driving as much as possible and bought a bicycle so the car only gets driven every couple of days. I refused to have children, because I believe there are too many people on God’s earth. I bear the scourge of this ‘strangeness’ and isolation. But there is something I’m not seeing.

even converts can be blind

As my greenness-advisor pointed out, what I write about is all ‘end of pipe’ and I haven’t thought enough about stopping the flow through the pipe of excess raw material consumption altogether. I didn’t pay much attention to what I was bringing into my home as a purchaser, as being pretty strapped for cash, I can’t choose the eco labels, and yet I buy so little soap, water, and petrol, I hardly present a problem, I thought. I believe poorer people, and also the very poor are naturally green. They buy little and whatever they buy gets used up in a multitude of creative ways.

My whole website is about end of pipe processing, how to turn the ‘inevitable’ garbage flow into a garden of eden with compost worms and other tricks. I never got up and said to myself:   “Why must this go on?”       “Why must the people who sell me stuff abuse me like this ?”   “I don’t’ want all that plastic in my shopping cart and printed paper advertising in my postbox, I just want the rice, and I know where to buy it…but they force it on me and its time I spoke up !”

I’ve thought too much on the microcosm of my little home and not enough on the macrocosm of country and globe.

approaching waste on a macro-scale

This is why I’m introducing the macrocosmic scale to my website now. I may go on designing systems, or ecological machines like water processors, aquaponic systems and green roofs, but I have to address the sources of all the unwanted pollution at the beginning of the pipe in some measure, instead bowing my head and let it all gush over me.

I’ve covered a few end of pipe micropreneurs (scrap dealers with horse carts and others) in my writing on the green home. But this is where I will deal with things on a bigger scale. There is more money than can be imagined in doing something with waste, and it may be a partial solution to employment problems, and so recycling will always be part of the solution, but for the sake of the globe, it has to be slowed and or stopped. We need to become waste neutral (not wasting anything in the sense of the verb) but also not producing anymore waste (in the sense of the noun) than the system can rework in an environmentally sensitive way, and use again as a raw material. This means no more excess, and only the essentials for purveying goods that must be distributed to feed, clothe, care for and house the world, and keep them in contact with up to date communication technology (I can’t get my head around giving up on that, its my main source of knowledge and knowledge is power).

whither with all this rubbish

I have written in the past about recycling, both as a very small, small and very large business. The first little step I’m taking in the direction towards the beginning of the pipe, is to review Zero-Waste Africa’s purchasing guidelines for consumers. Later I write on reducing paper waste, in business, and in the home, rather than how to compost the stream I didn’t ask for, which has been my strategy to date, and finally move on to the contentious subject of that difficult stuff…plastic. The German name Kunststoff  (artificially created substance) embodies far more of the dangers of plastic than the English, which merely means ‘malleable’ Clay is also ‘plastic’ (the adjective). Plastic free shops are the rage in Berlin, the rest of Germany, Europe and the USA... c'mon Shoprite... please give us the choice.

Do you have a recycling success story to share ? Do you have a tip that surprises because of its simplicity ? Share with us and win the chance to be recycler of the month and be featured on this website.

what do I do with plastic ?

Hello there I don't know what to do about all the plastic that ends up in my wheelie bin. How can I stop this happening ? yours Carol Anne

fuel from waste, and biodigestion