Trying different garden designs, the poor use of materials is a mistake I've made and continue to make. It seems the error is always analyzable post hoc, but the good matches

are unpredictable in advance, because each rule you make will be contradicted by another rule. It reminds me a bit of compound semantics, and I suppose it may be a cognitive commonality between design and language. In a post hoc analysis of some of my could have been better garden designs, I’d say: be real !

When I first entered my present garden after acquiring it, it was a box surrounded by vibracrete (precast concrete panel) walls, with knee high kikuyu grass, some knotty unpruned fruit trees, a tree high fountain of red bougainvillea in the middle, and morning glory everywhere.

THE BEAUTY OF UNEXECUTED GARDEN DESIGNS 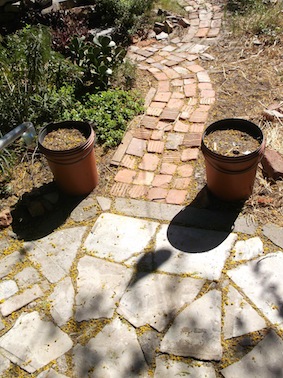 better use of materials

The first thing I did was root out the Kikuyu and morning glory, tough tough job but a good move, and chop down and poison the bougainvillia, good move. I've grown up with these three in the garden and I've felt the burning pain of the bougainvillea toxic thorns, seen all these invaders eat gardening time, and throttle all other vegetation under dank mountains of thorns and quangles of dead ropes or networks of hay. I left only the fruit trees.

Then I imported a large number of big hewn rocks from a demolition site, and made a raised mound with them of an oval shape, unaligned with any wall, in an effort to look natural, like a mediterranean stone terrace with herbs spilling over it, and I desperately wanted to ignore the vibracrete, or make it go away. I planted shrubs in front of all the vibracrete walls. These got pulled out a few years later, and since then the huge slate rocks and the vibracrete have been in an argument about which is the ugliest, like snow white and her godmother, backwards. It doesn't show so badly in photographs, because they are two dimensional stills. But outside in the garden, your eye connects the dots that are hidden by foliage and these horizontal panels are all too obvious everywhere. Planting foliage in front of them does not 'disguise' or 'camouflage' them. I realized to make them less 'wrong' I had to embrace them. Make them into a feature of the design, not something I'm trying to hide. 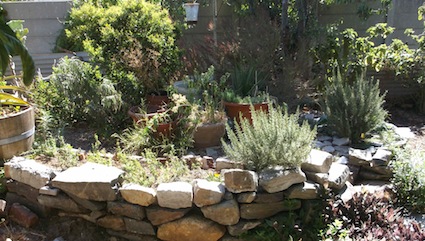 in full light its a lot worse, so I only go out in the cool of the day 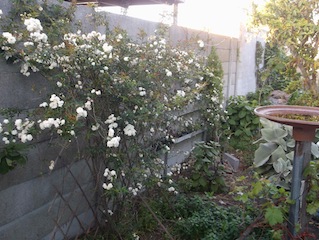 be real
the secret sauce in some wonderful garden designs

I learned from this, don't try to look ‘natural’ and French rural stone-house in a concrete box, on the other side of the world, it just never integrates. Be real. Face the materials head on without flinching or trying to deny them. Don't think that camouflaging an ugly feature surrounding the whole garden will leave you with a small piece of paradise that looks as if it's in the middle of nature somewhere. Garden designs start with foundational givens, denial is not a design strategy.  You have to face up to what you have, and make it into a positive, flatter it into submission. I should have gone for a peri-urban/rural backyard style and taken it into the realm of the radical. I should have put MORE concrete in the garden, not less. I should have used either more vibracrete, or unpainted plaster, and overstated the square in the square backyard pattern in harsh, cold cement. I should have built a square grey frame of knee high raised beds three metres in front of the vibracrete.

Something between an industrial and monastic feel would cause that square within a square pattern to resonate like an abstract painting. The inner square should have been small enough to create a sweet intimate enclosure in a vaster space, with exit portals leading off into the spaces behind the raised bed, where there would have been olive trees, with smooth white trunks, a monotonously surrounding, soft grey, and in the raised beds should have been salvias, artemisia, lavender and things with Karoo colours. I should have turned the whole garden into concrete sculpture, a work of walls of various heights, with a language of their own in which denial of their concreteness had no place. In which plants came later as misty grey blessings, or twisted tales of vegetable persistence contrasting with all the hardness. All ponds, which were inevitable, given Stephan's passion for fish, should have had the air of backyard concrete tanks, cisterns or reservoirs with knee high walls. Those ones you pass between the sheep kraal and the farm house, with stunted chewed off green stuff around the base, and a rusty pipe with a valve permanently dripping into a slimy cement trough. I once saw a huge mansion on a property website that had been abandoned half way through the building project. It was all untreated plaster. Absolutely amazing, beginning to crack and form stalactites, I'm sure it would have looked a lot worse once all the tiling, glass and wood was installed.

I should have donated the stone to the local library for their rockery. 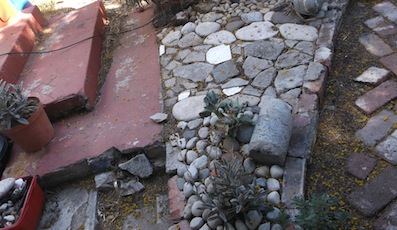 well enough fantasies about being real

I can't photograph what might have been. Instead the garden as it is now, is full of fussy shapes, wedges and circles and brick paving, white beach pebbles, rock blocks, cement shatter, concrete slabs, steps painted with red 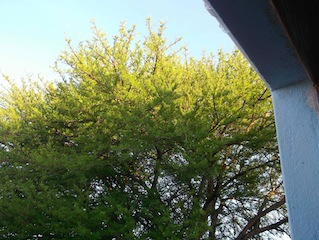 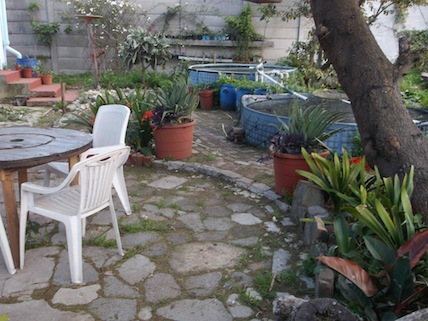 stoep paint, and the vibracrete never stops shouting for attention. I've tried to bring it together by repeating materials and colours, by using recurring themes, but its constantly embattled with itself, though slowly emerging from chaos... indeed, unwittingly I've been dreaming and planning in a manner most ungreen. Concrete is not a very environmentally friendly material. Perhaps the best I could have done to accomplish that radical grey walls design in a green way, was to use second hand vibracrete panels, but leaving it as it is, now that it is, is also quite an environmentally sound strategy.

Our garden's central inevitable element has become the umbrella of the huge Acacia Karoo and the shade it creates, and it was not planned. Now all planting works around the moving shade of this thorn tree. It is good. What I did not design, but just accepted is always good.

some lovely pictures of Cape Town gardens, to inspire thought on what works and doesn't work