Referring back to the garden plan for my backyard garden, before the north side of the garden can be planted, which is right of the big curved path labeled 'brick' above on the

plan, some transplanting is needed. Firstly, I needed to move the philodendrons to some pots in the shade. To get the pots empty for the philodendrons, I had to plant out the aloes and the purple wandering jew in the pot. The purple is going in the triangle between the two paths on the plan, and the aloe in a sunny spot near the other aloe, as they are desert plants really, not shade plants. 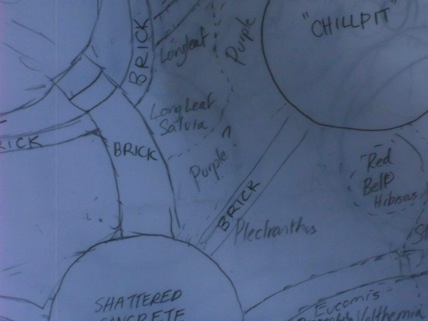 A section of the backyard garden plan 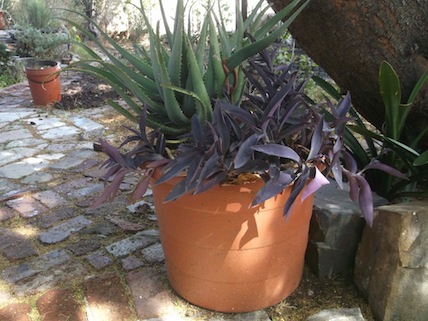 The second plant pot with aloe and wandering jew

The wandering jew was planted as one mass, as I couldn’t separate the plant, despite its size, without tearing it. I wanted to minimize its trauma, so that it soon flourishes and covers this area of the backyard garden. 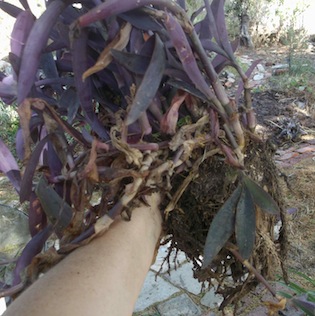 The mass of matted wandering jew from the plant pot

With this plant, and the one from the previous pot, and all the ones I’ve been growing on the window sill in a bucket of water I planted up the triangle. These snapped off purple shoots had taken only a few weeks to root. The shoots seem to fall off naturally when you touch the plant and I gathered all those which had fallen off during transplanting and put them straight in the soil. 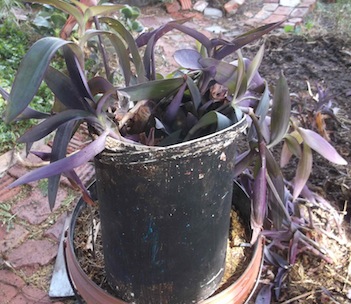 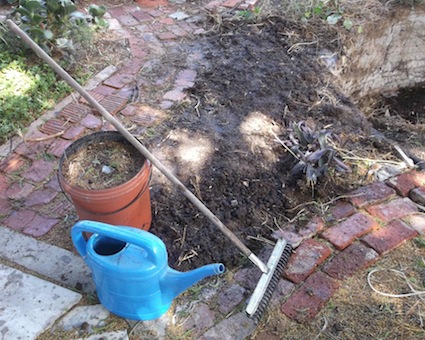 All in all there were about ten plants in this small area, and they cover quite a lot of space so the area will hopefully be covered soon. I left a few I’d potted up a while back for the edging of the chill pit which would be planted up at a later stage.

I removed the grass, laid a blanket of vermicastings, of which I’ve an ample supply, being part of a worm farmer couple of long standing.

Then I watered the bed, planted the wandering jew and mulched with dead grass, and scattered thorny branches to prevent my dog squatting and scratching in the area before the plants are established.

This doesn’t seem to work very well, my fluffy darling has graduated from strawberry and salvia destruction to become a purple plant patch decorator in the interim. 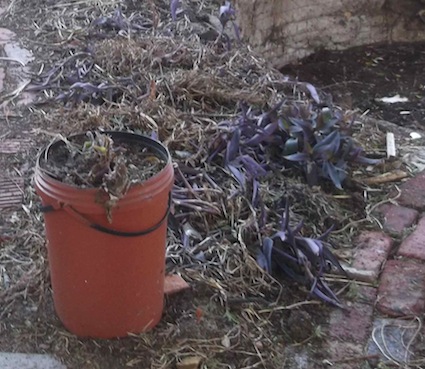 The purple area after planting, the plants hidden by loose dry grass 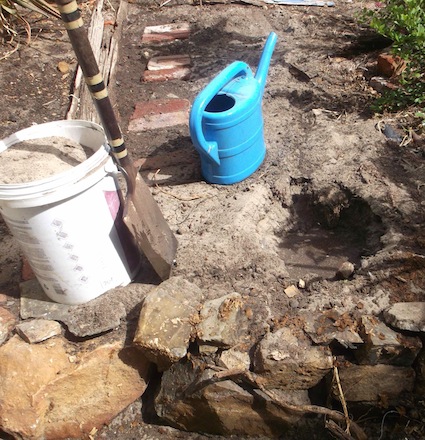 The aloe was then free to transplant. It had done surprising well in the shade, developing these amazing sulphur coloured roots which if not coiled up in the pot, must have been metres long. These grew in a few months.

I had previously removed the huge knot of creepers, then I restored the tumbled down foot trodden wall, and made a hole for the aloe where the creepers had been. I filled the

hole with water and let it soak in as this sand resists water penetration. It is old dune sand which has blown far inland and become coated with a fine film of plant resins from the numerous fires which occurred here in summer since before colonization even, and after. A lot of sand in the cape is like this. The water beads on its surface.

I planted the aloe and made a small berm around it and it looks happy in the company of the other aloe. 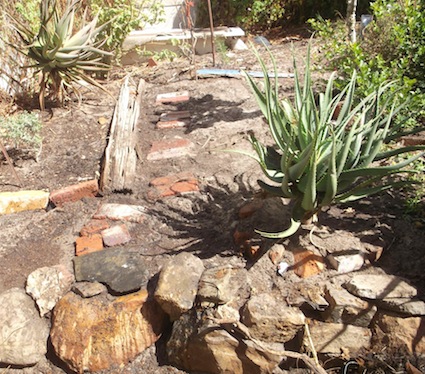 links to other gardening topics