growing green beans is easy and the results are delicious 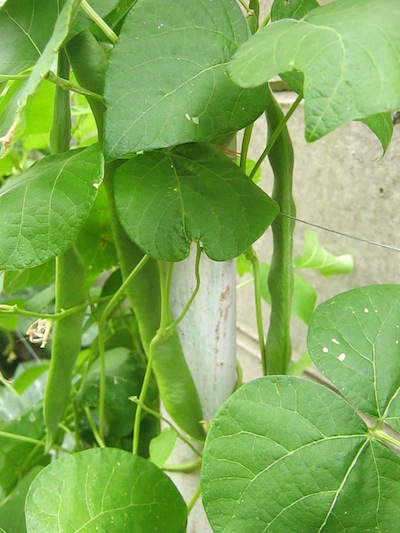 Beans are one of the easiest vegetables to grow. Growing green beans is a must in the garden. The variety of climbing beans we used was Climbing White Emergo, and it did very well in our soil which is sandy with lots of added Nitrogen rich compost and some vermicompost. These beans thus seem to tolerate Nitrogen rich and quite dry conditions.

Because beans harvest their own Nitrogen, or ‘fix’ Nitrogen, in bacterial nodules on their roots, and have strong tap roots, it is thought best to plant them direct in the soil. However, our climate is so dry it is hard to keep the soil moisture level stable enough for germination. We did the unthinkable and sowed the bean seeds in six packs, and transplanted them when they had two or four heart shaped adult leaves, not just the small oval seed leaves or cotyledon.  They thrived, as you can see.

growing green beans is a pleasure

We grew them on a trellis with verticals made from rough second hand steel reinforcing bars, about one centimeter thick and cut to length at the dealers, and with horizontals made of thin wire spanned between the poles. I set up the trellising system first then prepared the beds and planted out a few weeks later after the compost had been aired for a while. The beans wound their own way up the terrace without my assistance except at first, when they needed just a little guidance as the first wire was rather high and they lay horizontal across the ground winding around whatever they could find to hold onto.

We watered them daily at about six in the evening as shadow began to fall across the back yard. We use watering cans and water that has stood for a day to let the chlorine from the mains water evaporate.

The beans have pretty white flowers and the fruit are large, flat, slightly furry and have a delicious flavor. Steve harvested them with scissors to prevent damage to the vines. Even when harvested quite late, the fat white beans in the pods are creamy and fresh tasting. The later harvested beans had quite a bit of fibre, or string in them, so we suggest cooking them first and then destringing them if you don’t like chewing on the vegetable fibre and having to spit it out. As I ate I could hear my father’s voice joking about “stroings boins” (string beans in his version of an Australian accent), and there really is a reason for their name. Steve used them for an absolutely delicious Boontjie Bredie or traditional South African bean stew. 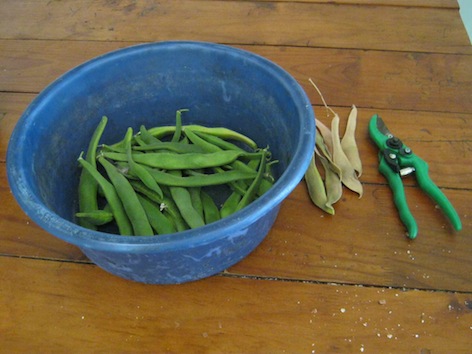 We have kept some of the biggest most perfect beans for seed collection. You can see the dry one’s we collected, which were already dry, but mostly malformed. The biggest and most perfect beans are still ripening on the vine. As I’ve learned from my permaculture teacher, who is an expert on organic seed saving, most seeds must be really really ripe and ripened on the plant to be fertile. I hope they are viable and we'll be growing green beans for free next year. This year's harvest was well worth it.