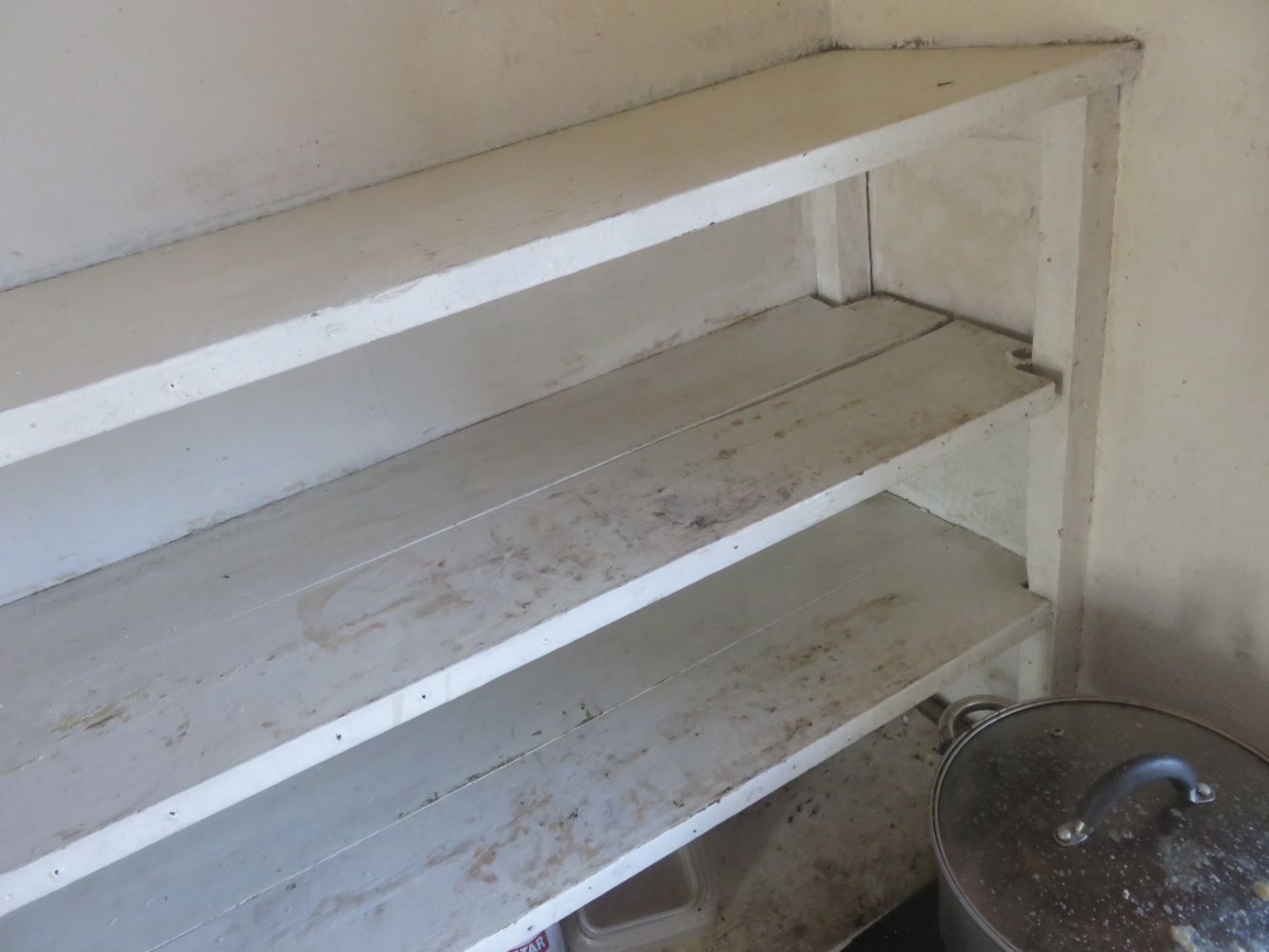 I found growing radishes unproblematic thus far. They grow easily and like most brassicas germinate quickly. This is why they are commonly used as markers to indicate where one has sown rows of carrots direct into the soil.  In the case of white icicle radishes which I chose, their long shape could also serve to drive the carrots down and straight, as they compete for space underground. It is like the principle of growing a lot of trees together closely so that they force each other to be taller and straighter more quickly. 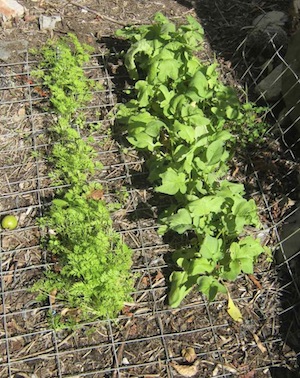 growing radishes and carrots together for companionship

My experiences with
growing radishes

I chose to try growing radishes with carrots and sowed carrots at the same time in a row next to the radishes, but I’ve heard that some gardeners mix the seed and sow it together so that they can see where the carrots seeds are. I will not do this, but plant them in separate rows. I was later glad of my choice because they do come up at almost the same time, and my row is only a meter in length and marked with labels, so its rather a pointless exercise to mark the rows in my case. Also, the radish foliage eventually outgrew and overshadowed the carrots, so if they were in the same row this would have been even more problematic for the carrots. 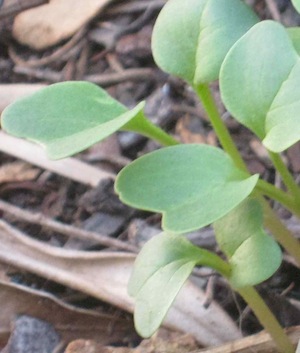 I sowed the radishes direct into the soil. First I removed the coarser compost material in the bed I had prepared for them, and pre-wetted the bed with a watering can or two of grey water. Then I used a sharp tool to scratch a groove in the soil 3 mm deep and dropped the seed in trying to scatter one ever centimetre or so, and gently closed the groove and tamped the soil flat with the palm of my hand, the way I’ve been taught by permaculture vegetable gardeners. 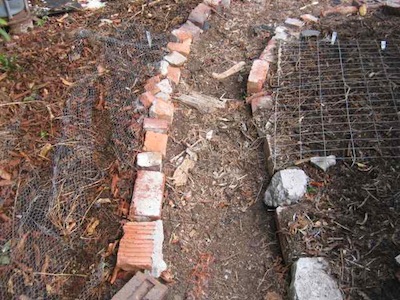 A barrier against scratching birds that really works

I placed wire netting over the bed to protect the seed from being scratched up by thrushes and other scratching birds which love our vermicompost rich beds. After that I watered the ground very gently but thorougly with 2 Litres of water from my bottle with the fine rose I made by hand from recycled material. This was the first time I used the fine seed sprayer and also the first time I ever got direct sowed seed to germinate. A fine sprayer does make a difference, and I love this simple tool made easily from an old plastic water bottle. 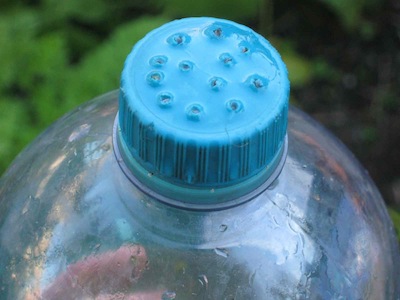 I watered them in the morning every day until after they had emerged and were a  good hand high. Then I tailed off the watering to three times a week. After that the rains came as they do in winter in our region and I could stop watering.

A week ago I pulled up a radish and a carrot and found the radishes were big enough to harvest but the carrots need a long time yet. I sowed them both on the third of March and its now the twelfth of June so the radishes took approximately three months to be harvestable, and the carrots will take quite a while longer. This was in our autumn weather which stays above 10-12 degrees Celcius and sometimes reaches a blistering 36. 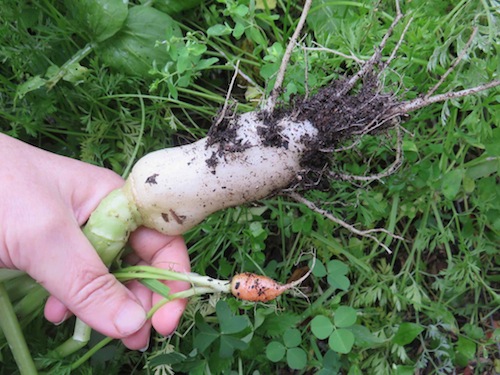 I sowed a second row of radishes nearby a while later to keep supply coming, and will harvest those at a later date. I am harvesting the first row today, and my husband the blogging self taught chef has found a German recipe for radish salad with sweet mustard, pickled cucumbers, herbs and Weisswurst, which he will share on his website soon, God willing.

My growing radishes have nice big leaves before harvest

A half an hour later I am so glad I said that as a big learning curve has come in the time in between. Seduced by the large radish I pulled a few days ago, and by reports on the net that radishes can mature in two weeks I was impatient. I've taken out most of the radishes way too early, and there was a disappointing harvest of only a handful of roots of sufficient size, and dozens which had not started to form yet. Apparently according to the hasty research I've done sense then, I should have taken a peak at them by scraping away a little soil round the roots and only pulling the big ones. It sounds rather time consuming and difficult with all those leaves in the way, but after all the trouble I've put in growing them I will certainly do this when the next lot appear to be ready. I am still glad I removed them as they were shading the carrots, and I'll never plant white icicle radishes so close to carrots again. I'm also glad I've already done a second sowing of both radishes and carrots, and that I keep planting records !

One good thing comes out of this. At least you know I'm a real human being and writing original material, not a robot or copy and paste artiste. I've also tested the reputed fine partnership of carrots and radishes and found that putting them together does not always work very well.

We'll still make the recipe, bulking it up with industrial radishes ! 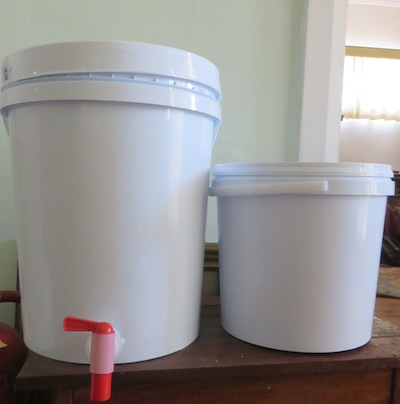 A little disappointing, the biggest radish is thumb size

home page for tips and shared information on natural gardening

Our cooking website with healthy quick meals, and lost of German foods and international curries.