Growing Cocoyam in a grey water wetland in South Africa 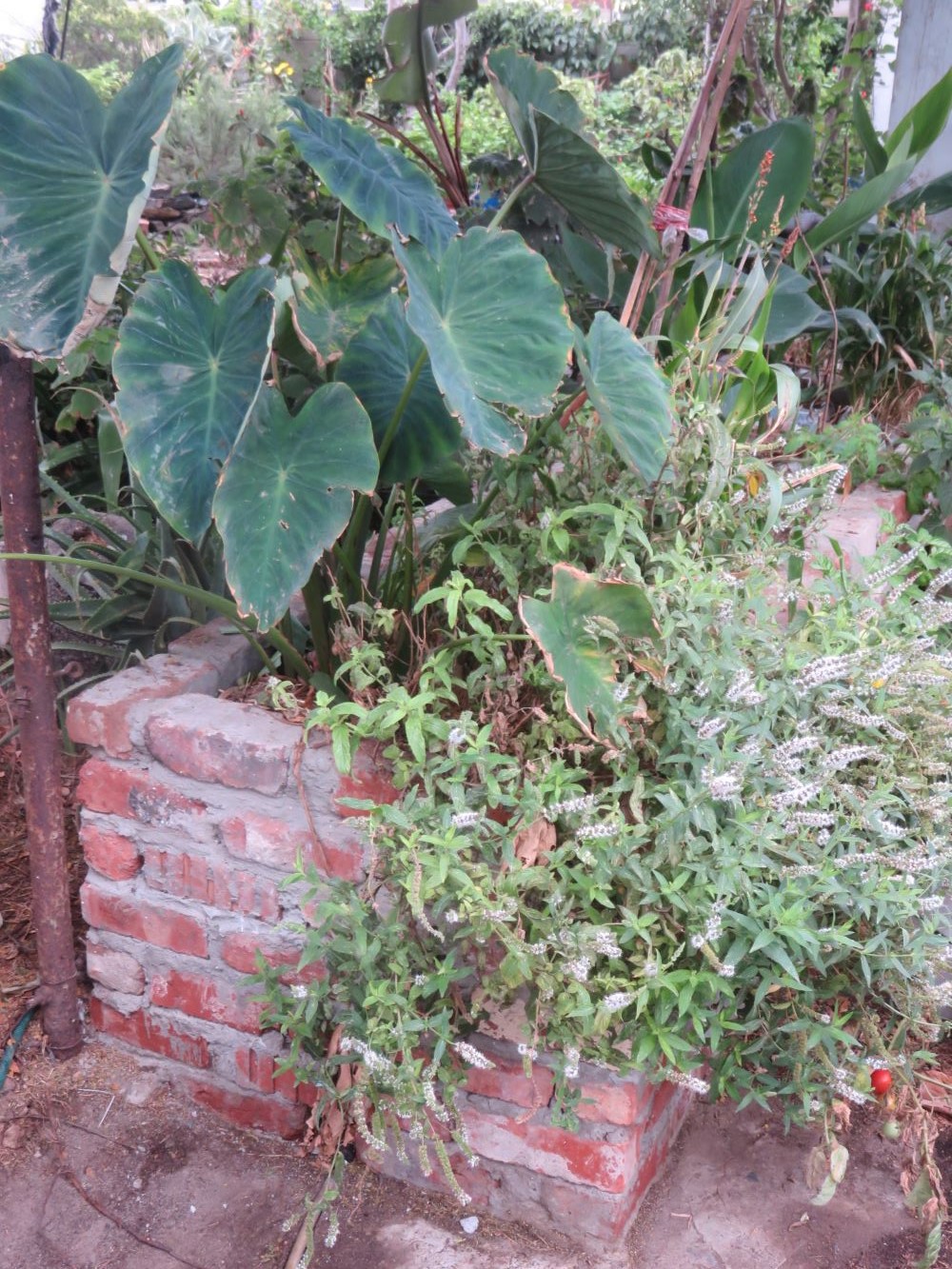 The cocoyam in summer with lots of large leaves, a little wind burned. It is growing in a bio filter which cleans kitchen grey water.

The term cocoyam brings back the memory of a Ghanaian friend, on whose lips I first heard this word. Indeed in West Africa it can be applied to a number of root vegetables, but most commonly to a form of Colocasia esculenta, according to Wikipedia.

Even the story of food and food plants as told, for example, in 'Guns, Germs and Steel' by Jared Diamond, is distorted by global structural inequalities. He minimizes the effect of Meso-American plants on on global agriculture. Perhaps he has not heard of most of them. Today American nurserymen are hot on the trail. Of possible Indian or African origin, Colocasia is just another plant with a neglected history, shrouded in the mists of deep time, and possibly was one of the earliest food plants to be used in agriculture.

I grow the Colocasia in a wetland built just over a year ago. The wetland is working with very little labor input (an hour a month perhaps). I've written a book on how it was done which you will be able to find on my home page or in the side bars as soon as it is published. 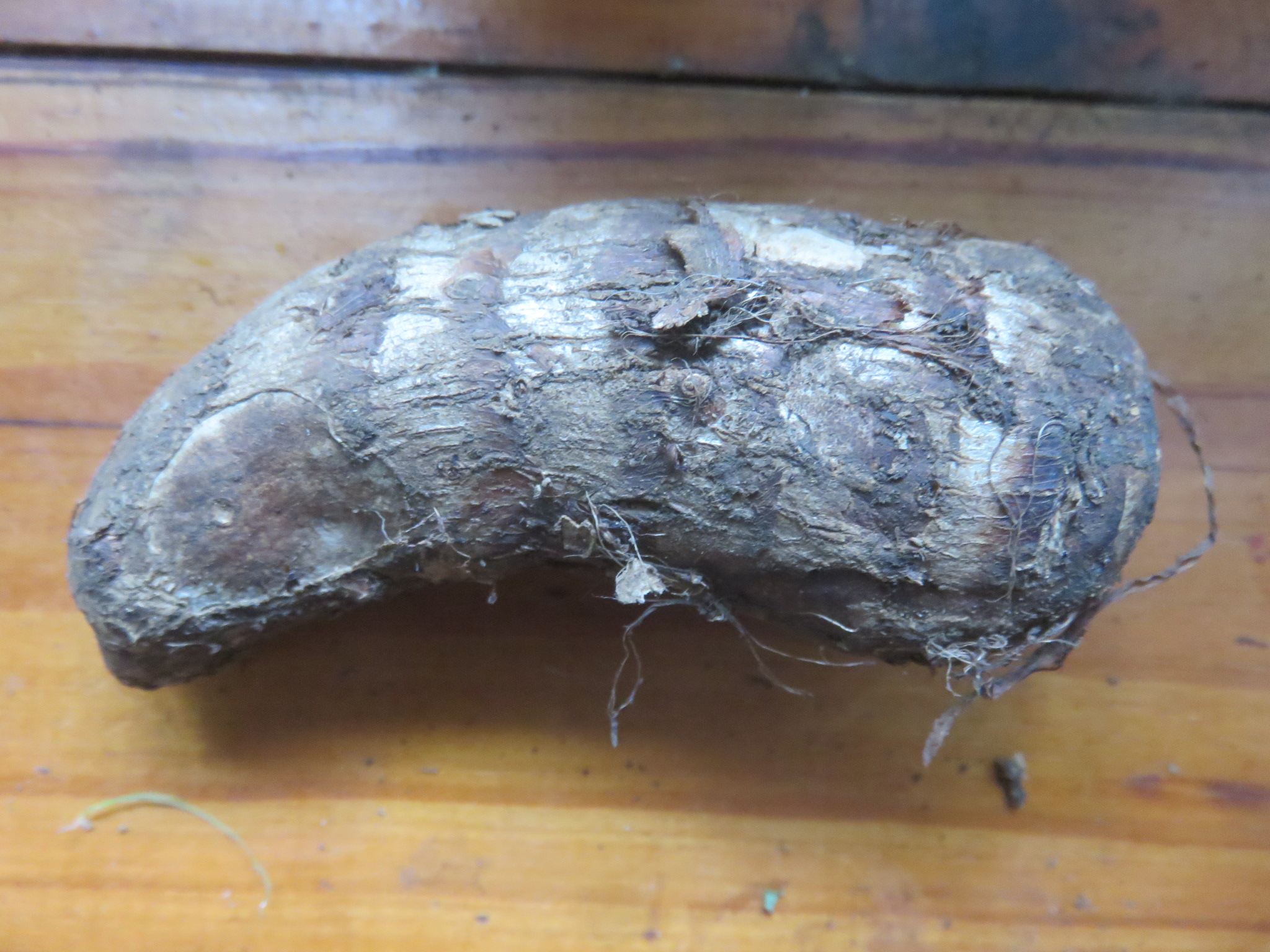 The vegetable can be bought at some greengrocers to start propagation, but off-shoots are best once you have plants.

I obtained my plant from roots, called Amadumbe in South Africa,which I bought at a local green grocers. My attempt to grow them in a plastic jar with some water only led to the tubers rotting and going moldy. Whereas the same technique with Chinese yam is successful more than 50% of the time.

I planted about five of them in small pots. Only one sent up a tiny shoot. Other gardeners like those at the Woodstock Peace Garden grow cocoyams from slips. These are obtained by digging up cocoyam clumps and easing off the side shoots which have some roots or small tubers clinging to them. There will be more on this way of propagating just now. It is better than using the store bought vegetable as my success rate from those is not that high, as proved by my own experience. 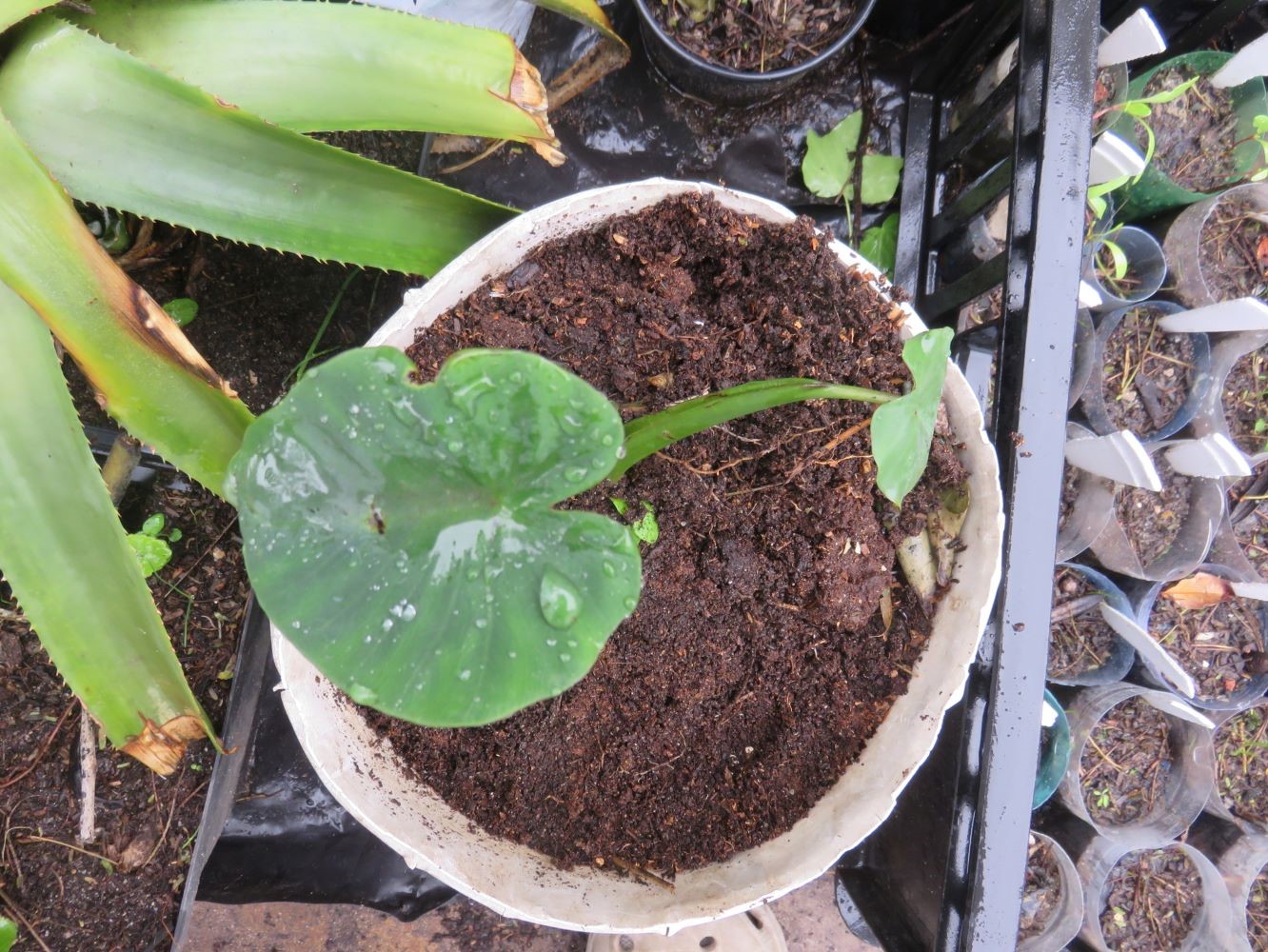 Success ! one of the five tubers produced a sprout

Once my grey water wetland was saturated with water, I planted it up, and one of the plants was the taro plant or cocoyam. A lot of the other pockets were planted with cover crops. You can see the mint here, in the pocket next to the cocoyam. It is still quite small compared to its luxurious growth a few months later, which you can see in the head image. 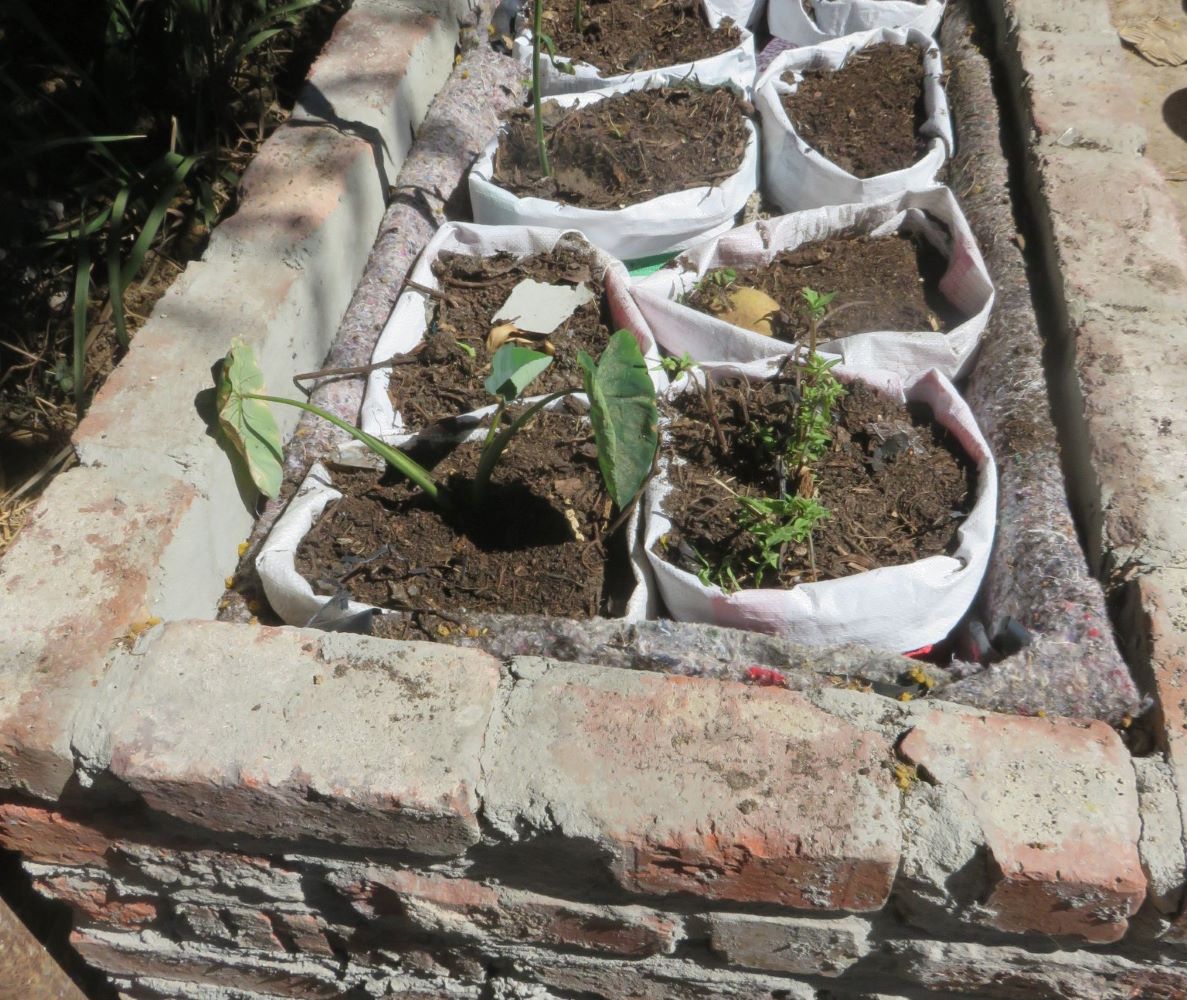 The cocoyam was planted in the grey water system with the first planting after building.

Actually, cocoyams are are one of the rock stars of permaculture wetlands and water recycling systems in warm climates. The large, sculptural, dramatic and voluptuous foliage make cocoyam a must-have in the garden, purely for aesthetic reasons, if you want to create an impression of tropical abundance with one brush-stroke. They are used in wetlands as they can tolerate soggy earth, even standing water, but they do not have to grow in a wetland. 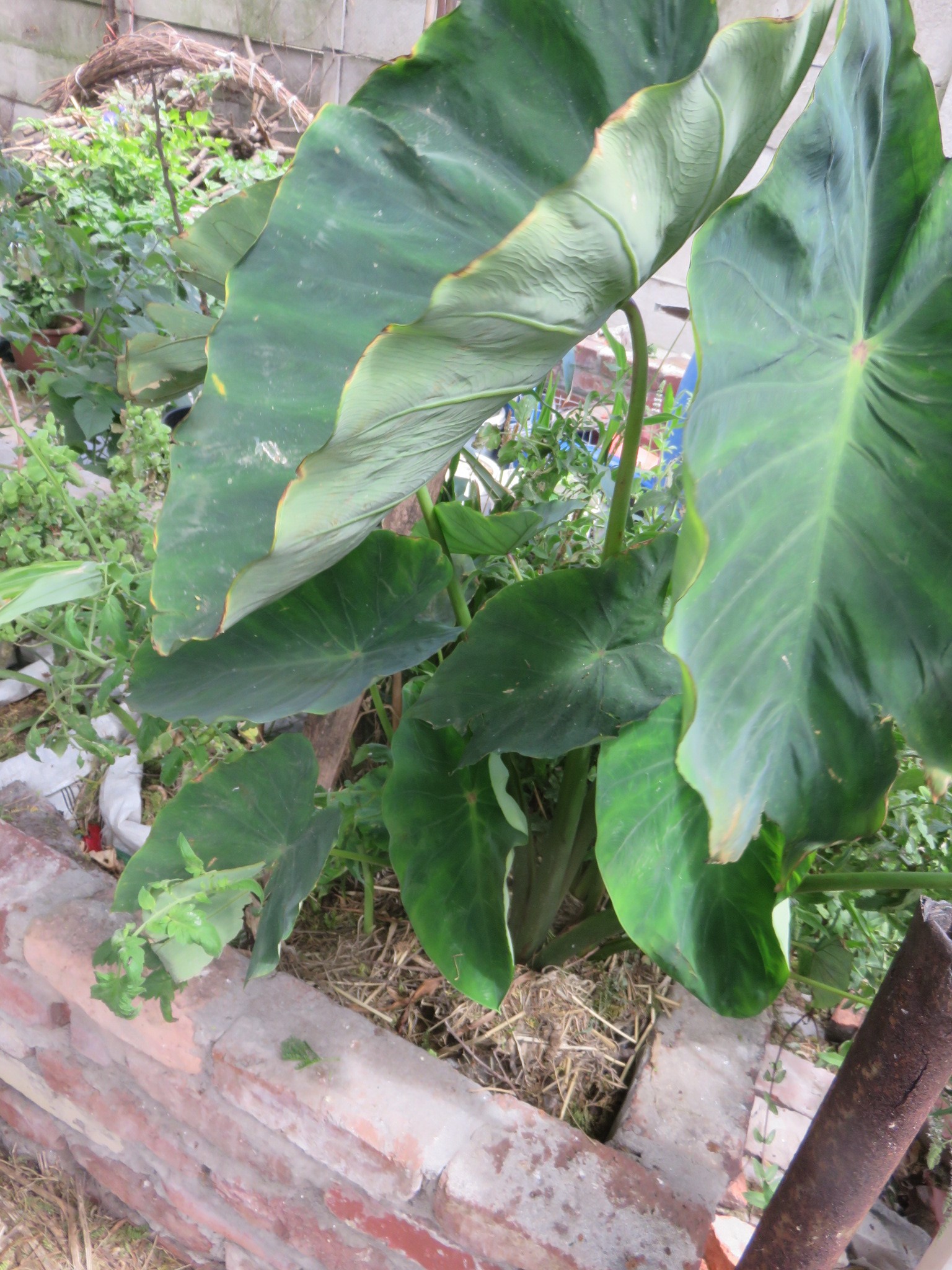 In high summer the plant shot up and looked magnificent

In my artificial wetland the one small successful plant took off and grew extravagantly, when other plants succumbed to the alkalinity in the system (alkalinity is not normal for grey water recycling, but is due to some of my choices of materials). They are thus very tolerant of ranges in pH, water supply and soil.

What the cocoyam did not like was the ripping winds which hit the wetland. This can be seen to some degree in the head photo of the article. Its large plate sized leaves were perpetually in shreds and browning at the edges. This is why I transplanted most of them into my second grey water wetland which is built in a sheltered spot. 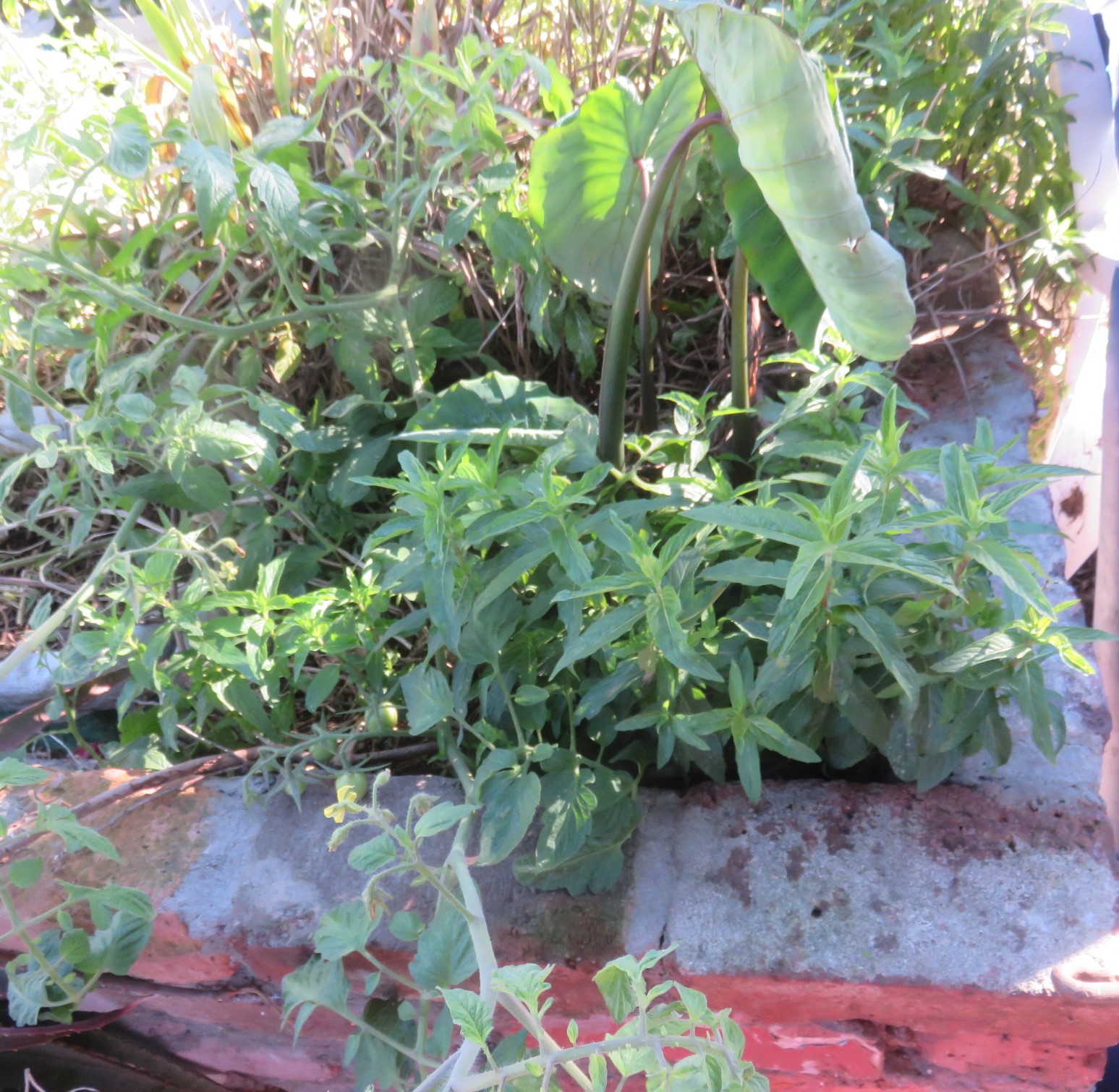 then in its second winter it died back to a couple of small leaves.

At the height of summer they were enormous, but as winter came on they died back, leaving only a couple of leaves. I thought it was time to dig them up to take them to the new bed. 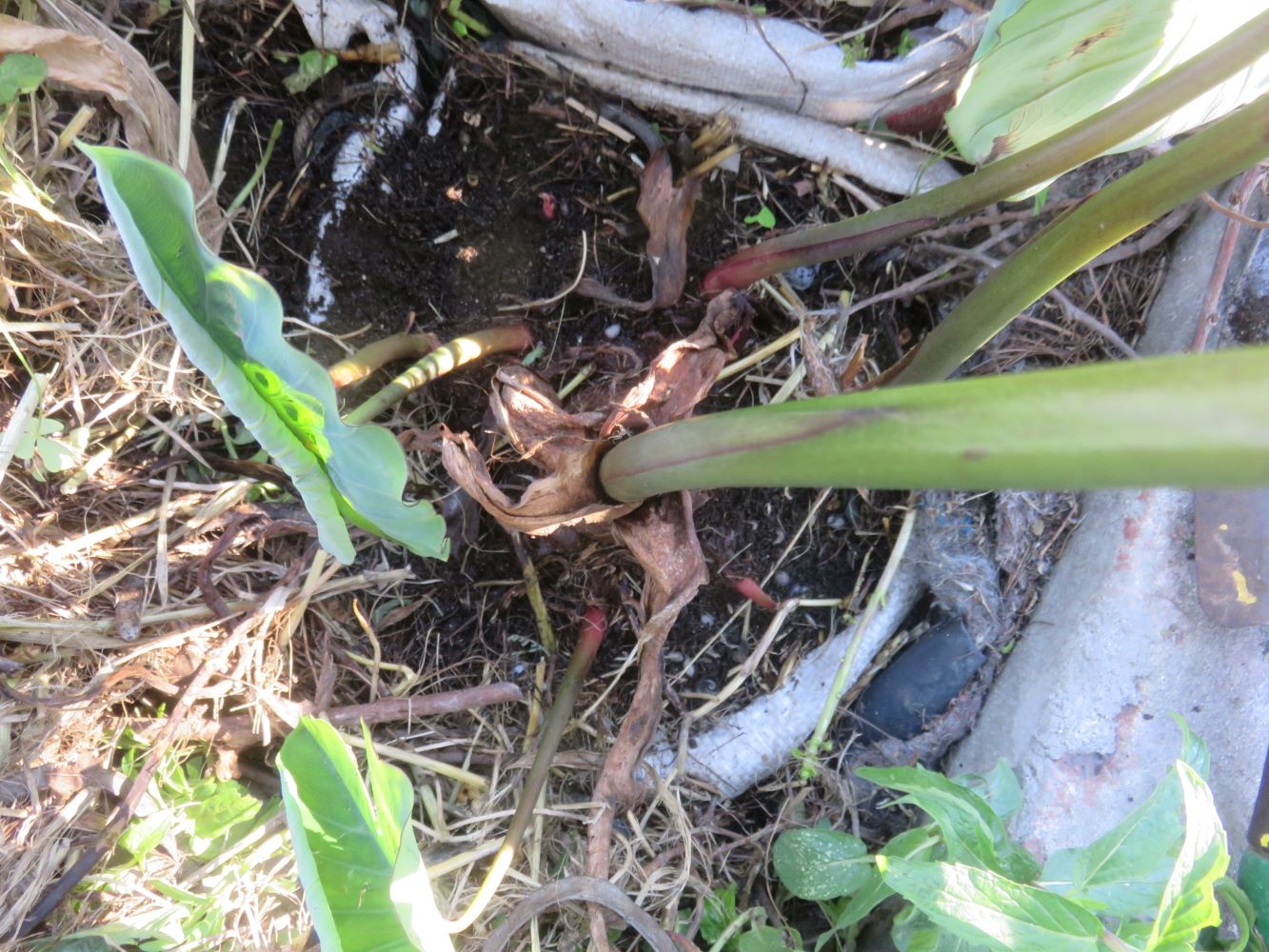 Stripping away the thick mulch I found a large main stem with many pink or green side shoots.

After digging and then pulling it up, I was truly surprised to find that so much had been going on underneath the ground. There were now 12 tubers where a year ago I planted only one small plant with one tuber. The appearance of the tubers was also very new. The mother tuber bought at the greengrocers was elongated whereas these new ones are round. If they do elongate eventually they will be much larger. The purple shoots are beautiful, looking vaguely like the sprouts of some kinds of ginger. 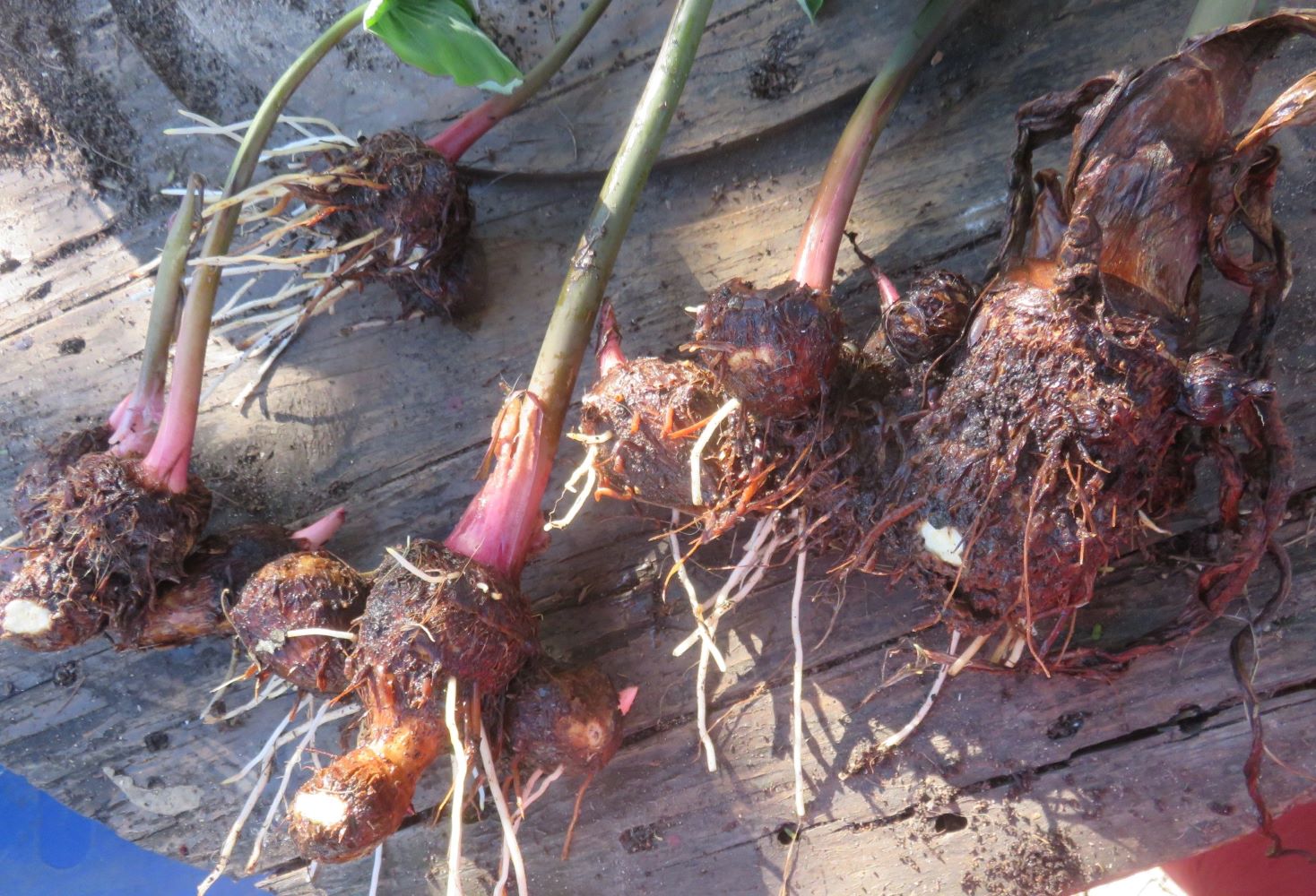 The new tubers that have grown, while the original one has tripled in size.

I divided the cluster and planted it in 6 different holes in the two wetlands. I am not harvesting it to eat yet. I would like it to become more abundant first so that eating it does not take down the population, and so that it needs less care. I am a bit worried as while subdividing the clump, the narrow connecting bridges between the new tubers were broken and represent fresh wounds. I did not dry them and allow them to callus as I'm even more concerned about non-viability when they lose their freshness and their numerous white roots. My first attempt to grow from shop bought tubers had about 20% success only. I added some rock dust and compost to the soil where I replanted a small piece of the cocoyam back in the same hole in the wetland, as it may have depleted the soil there. I hope replanting in the same damp spot will not lead to disease. We will see what happens to the cocoyam this summer. 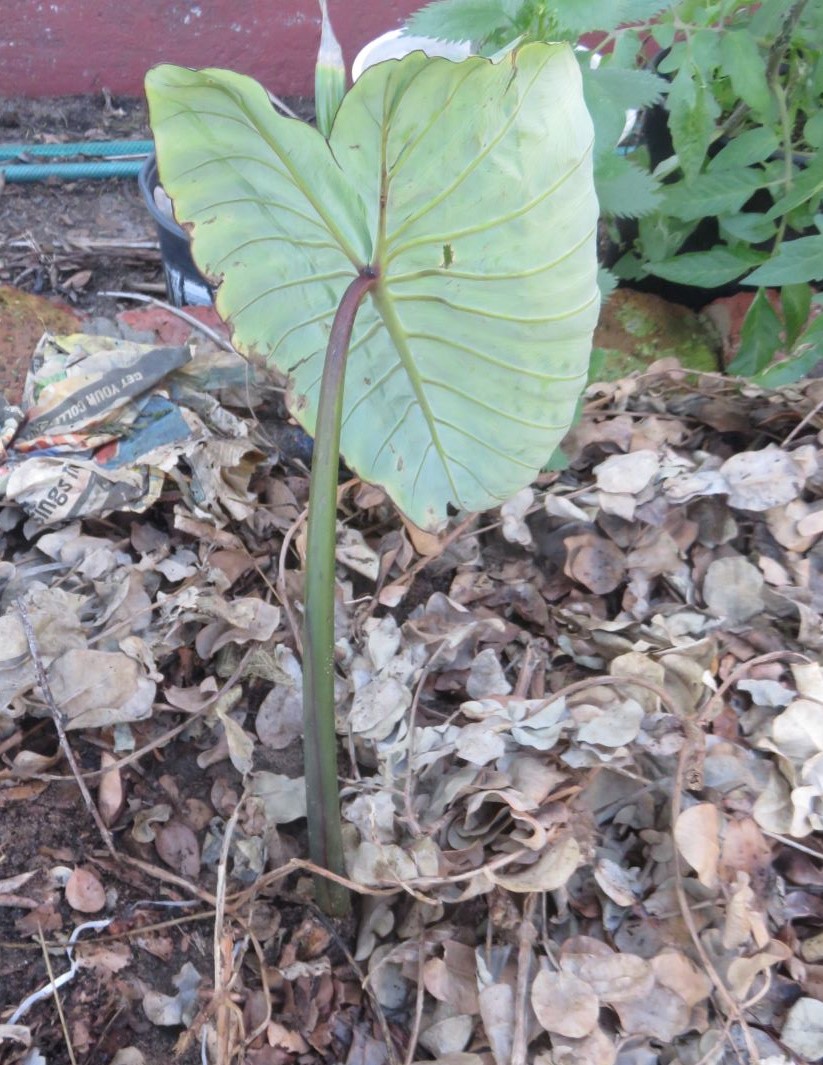 One of the offshoots I planted in my new, sheltered, grey water system.

Touching on the history of cocoyams

I refer to the plant as cocoyam, paying homage to its widespread use in Africa, and its membership in ancient groups of early domesticated foods which moved across the world before historical times. In so doing I side step the huge diversity of African names that it has acquired through its long use on this continent. Though reputed to be of Asian origin, it was introduced to Africa at 'a time unknown' and Nigeria is the greatest producer worldwide, and together with Cameroon covers 60% of global production according to this article by Ilaria Maria Grimaldi and Tinde van Andel. 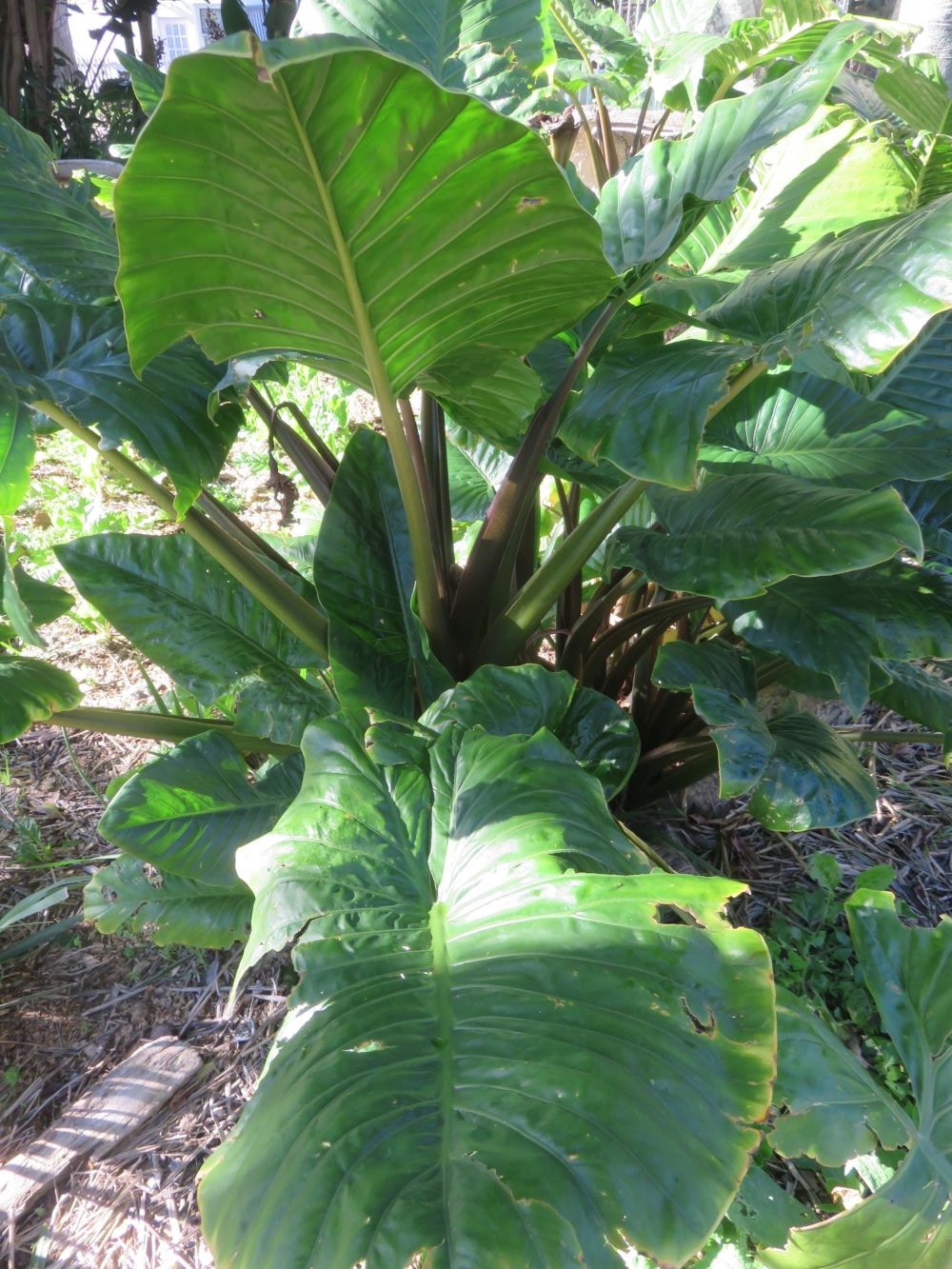 Possibly a Xanthosoma spp, known as 'new' coocyam, growing at Soil for Life in Constantia. It has only been imported to Africa recently.

Most people around the world have their own names for the cocoyam, and are not familiar with these African names like Koko or Kokoo in parts of West Africa, Eddo in Nigeria, Amadumbe in South Africa, Magimbi or Myugwa in Swahili. Some of the African names bear a distant linguistic similarity pointing to networks of naming and agriculture in Africa, others terms are very different in every way, and show how diverse this continent can be linguistically, especially in West Africa. In most of the Americas and Europe it is referred to as taro, and its uses were already known in Europe since the Byzantine era, where a generic term yam was given to all warm climate root crops. The linguistic diversity in its naming across the globe also reflects its morphological diversity on this continent and around the world. The cocoyam may have been cultivated for a very long time, and because of the length of time since its domestication, there are many local varieties in Africa and also different varieties in Oceania, Asia and the Americas.

Grimaldi and co. are researching the early movement of plants around the world, such as the spread of taro through Oceania, and through transatlantic travel in more recent history. With a combination of historical record, medicinal and culinary patterns of use, information which could broadly be called linguistic, and genetic information, they attempt to piece together the history of this plant which is elemental to human migration across the world both in colonial times and deep history.

For example Dr Ilaria Maria Grimaldi did an interesting study to trace the African origins of cultivated Colocasia (taro) species found in Suriname. Specimens in living plant collections and herbaria were compared to 775 plant specimens she had collected previously in Cameroon, Nigeria, the DRC, Tanzania and Kenya.

Using mitochondrial and nuclear microsatellite gene markers, the samples were submitted to multivariate, cluster and Bayesian analysis to see if they clustered with the African samples.

Uses and cautions when preparing cocoyams

Most usually the tuber of the cocoyam is prepared for eating. However, it is also a medicinal plant. Non culinary use of the plant is recorded in 20 African countries according to Grimaldi. In my food research I found that in India, which is theorized to be taro's place of origin, the leaves are eaten too, very well cooked. The dish is called pathrode in Konkani cuisine. The leaves are smeared with stuffing, rolled, steamed, and served sliced through to reveal the spiral, like maki rolls or Swiss roll.

Taro or cocoyam has to be processed to remove the poisonous phytochemicals which vary in strength across varieties and the diverse processing has become part of culinary traditions around the world keeping people safe. My sister in California, being divorced from this food culture, had a bad bout of food poisoning when she ate Colocasia she had grown.

It is important to find out how the variety you are using is processed to remove the toxins which cause swelling of the lips and throat and irritates the stomach. Like many members of the Araceae family taro contains Calcium oxalate which is poisonous but removed by the heat in cooking.

home page for links to many articles on natural gardening

Perennial food plants, their benefits to health and environment

I eat cocoyam a lot, and have never had a bad experience. It is delicious and highly medicinal. Just ene you cook it ( I really wonder why someone would …