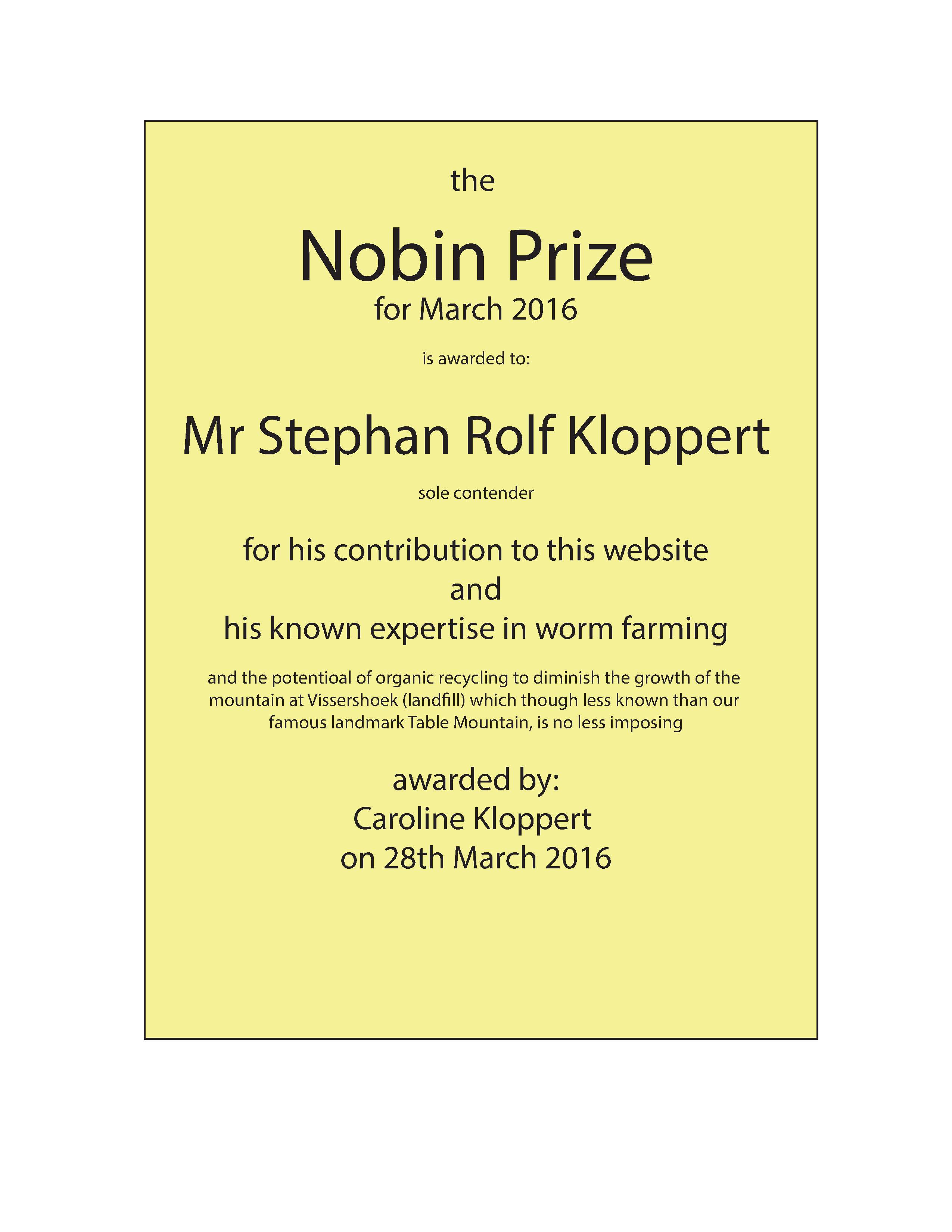 Last month's Nobin Prize was awarded to organic recycler and worm farmer Stephan Rolf Kloppert, for his contributions to the greening of our environment in Cape Town through vermiculture.

Stephan practiced as a worm farmer in Cape Town for more than a decade, and was in many senses a pioneer. He handed over his business to the purchaser of most of the production equipment and worms when he left South Africa.

For years and years, he had to argue for the rationality of worm farming against enormous phobic resistance. It is the best means of reducing carbon emissions from organic domestic waste and he had to do a lot of explaining to those who found worms disgusting, and couldn't bear to touch them, and overcome the public's fear of flies, smells, maggots and more from vermi-composting, with untold hours of telephonic consultation, trouble shooting and advice for which he was never paid a cent, while other consultants earn a comfortable middle class salary. All the sacrifices made are common in those with passion and he deserves recognition, at the very least, by the granting of the Nobin Prize.

Commercial worm production is a dirty job but he loves farming and took it on with relish. The domestic market is also small and the living is moderate without big government or city contracts, and the connections and identity needed for those. He had to deal with fierce competition from copycat producers, and he kept going as most of them slowly dropped by the wayside, the scales of romanticism falling from their eyes I guess. Finally, he has headed back to his home country Germany, to try his luck there, and I hope that this award is the beginning of a story of prosperity for this intrepid small farming pioneer.

Worms remove the rotting substances as they soften and putrefy and greatly reduce the production of methane, which is produced in landfills and most anaerobic conditions of putrefaction. The removal of soft material as it rots is why a well kept worm farm does not smell. I have input from experienced people that composting human feces in a closed space with sufficient worms does not even produce an odour. It is the solution to a huge human waste problem, as well as reducing the output of waste to landfill sites. With worms you can process paper, kitchen waste, garden waste and dog feces, and more. It is slow when you don't have enough worms, but it steady. Other forms of composting require carefully structured composting heaps and until you build one, your kitchen waste must be preserved somehow, or it putrefies and creates greenhouse gas.

home page for lots of ideas on green things