how to plant garden with careful carelessness 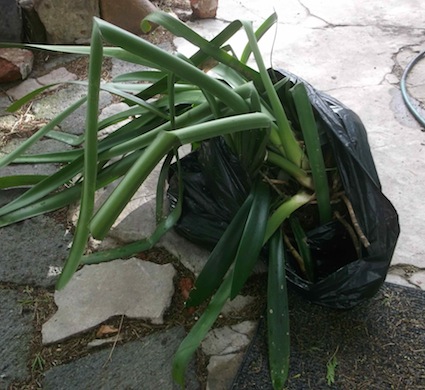 a gift of a bag full of clivias: what next ?

how to plant garden in big hurry:

How to plant garden in haste between jobs ? I was given a bag of Clivias as a gift, ten in all, a few days ago. Was this a sudden unnecessary workload or a blessing ? It was a blessing, absolutely perfect for the last few unplanted corners of the garden, and I calculated, on the run, that the couple of hours it would cost me would save time and money, as I would not have to go out and look for something expensive to fill that difficult shady corner.

I was presented with the Clivias by my mother two days ago, and I felt I just had to take them as I need plants and could never afford to buy Clivias, which are beautiful shade loving (rare) indigenous flowering plants with lovely sculptural forms that can be used as accents. I was not planning for gardening so I didn’t have time, and I had to do some hurried solution finding and planting out. There were the ubiquitous orange flowered Clivia miniata as well as the long leaved Clivia gardenii, given me some years ago by Coleen Weller who had a beautiful entirely indigenous garden in our neighbourhood, and which had been not-thriving in my mother's dark garden.

The Clivias need to go into a shady spot, but not absolutely without light, where I have seen them slowly pine away behind a garden wall in a deeply shaded area covered with trees where they never got any sun, and very little light. It was so dark I had to turn on the lights in summer at midday to see what I was doing in the kitchen. The pining Clivias may have been attacked by a root caterpillar (the yellow and black banded lily borer) though, and I hope I have not infected my garden with it now. I inspected the roots and saw nothing, but Clivia roots are succulent and dense like a hundred fingered hand, and the eggs or caterpillar could easily be hidden in the spaces between the roots.

HOW TO PLANT GARDEN ACCENTS
(a little TONGUE IN CHEEK) 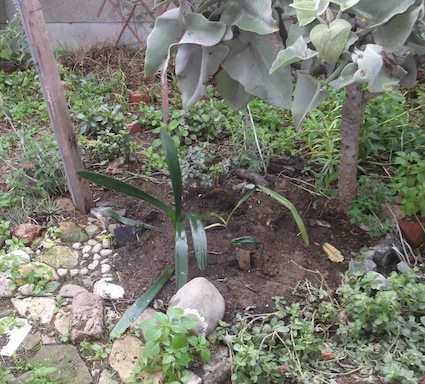 The c.miniata went into the bald spot where the vine used to be, under the kalanchoe, an accent because of its size, colour and shape. the clivias will form a lovely contrast in all of these parameters

There were only 3 Clivia miniata plants. I think I can distinguish them as there is a little point at the end of the leaf whereas the C. gardenii tip is perfectly curved. I decided to use them to fill the gap in which I have removed the vine. Its an area I mistakenly classed as sunny, half under a huge Kalanchoe (elephant ear) about 2 meters high. Even the succulents there are not doing so well. I say “even” because I’ve had aloes thriving vegetatively in the shade of the A. karoo. However this little spot gets shade from the umbrella of the Acacia karoo thorn most of the year, and the Kalanchoe when the sun is above, in high summer and some of the succulents just never grow at all, and I felt the vine was not getting enough sun either. I had transplanted it only a week previously, as I'll explain below. Removing the vine had left a hole in the garden. 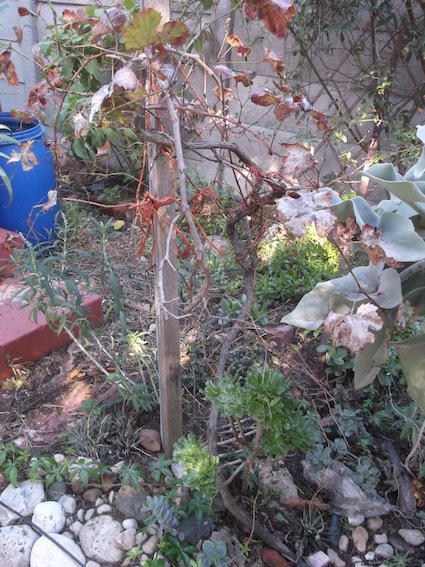 the vine as it used to be, in shade most of the year

how to plant garden
spots for relaxing

I've been thinking of how to plant garden spots I've planned for rest and quiet viewing while sipping tea. The area under the big thorn tree is laid out already. This will be the second spot. I thought the vine would thrive climbing the posts of the old henhouse and spreading out in the sunlight above, over the area where I’m slowly constructing a bench and concrete table. It will be a tea and snack and meditation spot, and it’s view of the garden is completely different in mood to the view from the house. From the little bench one looks straight into all the sun loving bushes on the stone mound, it has a wilder “in the Fynbos” feel, where the rest in the shade of the Acacia planted underneath with Clivias and ferns has a more foresty feel. 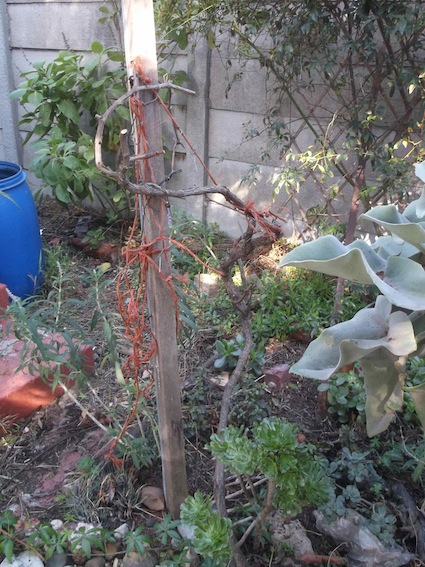 the vine where it used to be after heavy pruning

The end of last summer as the vine leaves fell I pruned it back heavily, to make the roots recede too so that it could be transplanted without too much damage, I thought. Once the vine had lost its leaves I waited some months till it was well and truly dormant, and I transplanted it over to the henhouse garden.  It was transplanted rather brutally. The old vine root underground was the thickness of my wrist,but I could not dig out and eventually had to cut off its deep tap root, the width of a finger, about 20cm down. This left some wiry red roots that look like support roots at ground level… and a few deeper down, they all looked terribly dormant and the vine is supposed to develop its root system during the winter rains. I am worried it will not survive but we’ll have to see when spring comes. I hacked another third off the top of it which was growing impossible twisty and contorted. The rest was in a lovely helical shape which fitted around the pole of the henhouse nicely. 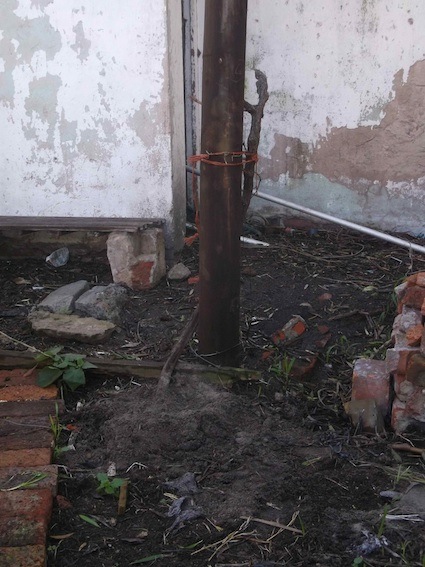 whether this is how to plant gardens in a hurry with transplanting, spring alone will bring the answer

So all this digging left a huge hole in the vine’s old succulent garden. I had moved all the succulents which would be affected to the sunny part of the henhouse garden and I put the Clivia miniata where they had been, as I explained above. Back to the henhouse garden.

I love the Clivia gardenii fan shape when fully developed and it would stand out perfectly against the peeling white ancient lime plaster of the garage, as will as profit from the indirect, reflected light off the wall. So I planted them around the olive tree in the shady part of the henhouse garden, skirting the pond. Some may get sun in high summer. But the development of the vine should shade them eventually. If it grows.

how to plant clivias (smile)

I didn’t take much trouble in planting the Clivias because I never do, as such I’m at fault. I didn’t have a lot of time, and it was a big struggle digging between the large olive roots, and removing some wire fencing someone had embedded in the ground, so I spent two hours planting out the Clivias nonetheless. There’s a lot of black olive leaf mulch around that area and the soil is pure white sand, I hope the combination of leaf compost and well drained sand will keep them happy. A C. miniata plant in that spot grew so well it provided plant material for about two square meters of garden a few years later. We’ll see. After I had planted them out, I noticed I’d forgotten to orient them so that the fan shape would be visible from the house and from the little bench, so I cruelly twisted them in the still soft crumbly soil. I heard a few leaves and roots snap. Then I tamped them down and watered them. I will probably have some losses. I’m saying this to encourage those of you who are scared of plants. After working with a landscape designer, when I was doing my horticulture and design practicals, I was shocked how fast and how roughly the planters work with plants. Previously I had always planted so carefully and still things tended to die. Generally they are going to like where you’ve put them or not, and the most important question is whether the place you have chosen for them is going to be superceded by their own choice. Yes plants have a will, the thrive or they don’t. They vote with their growth. So make sure the spot is right for them. 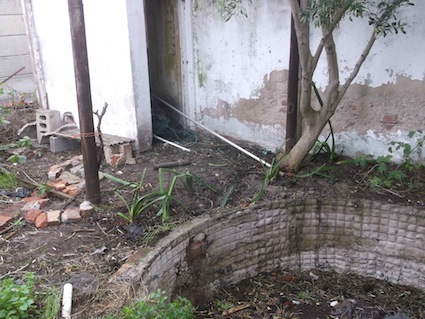 vine and clivias in place