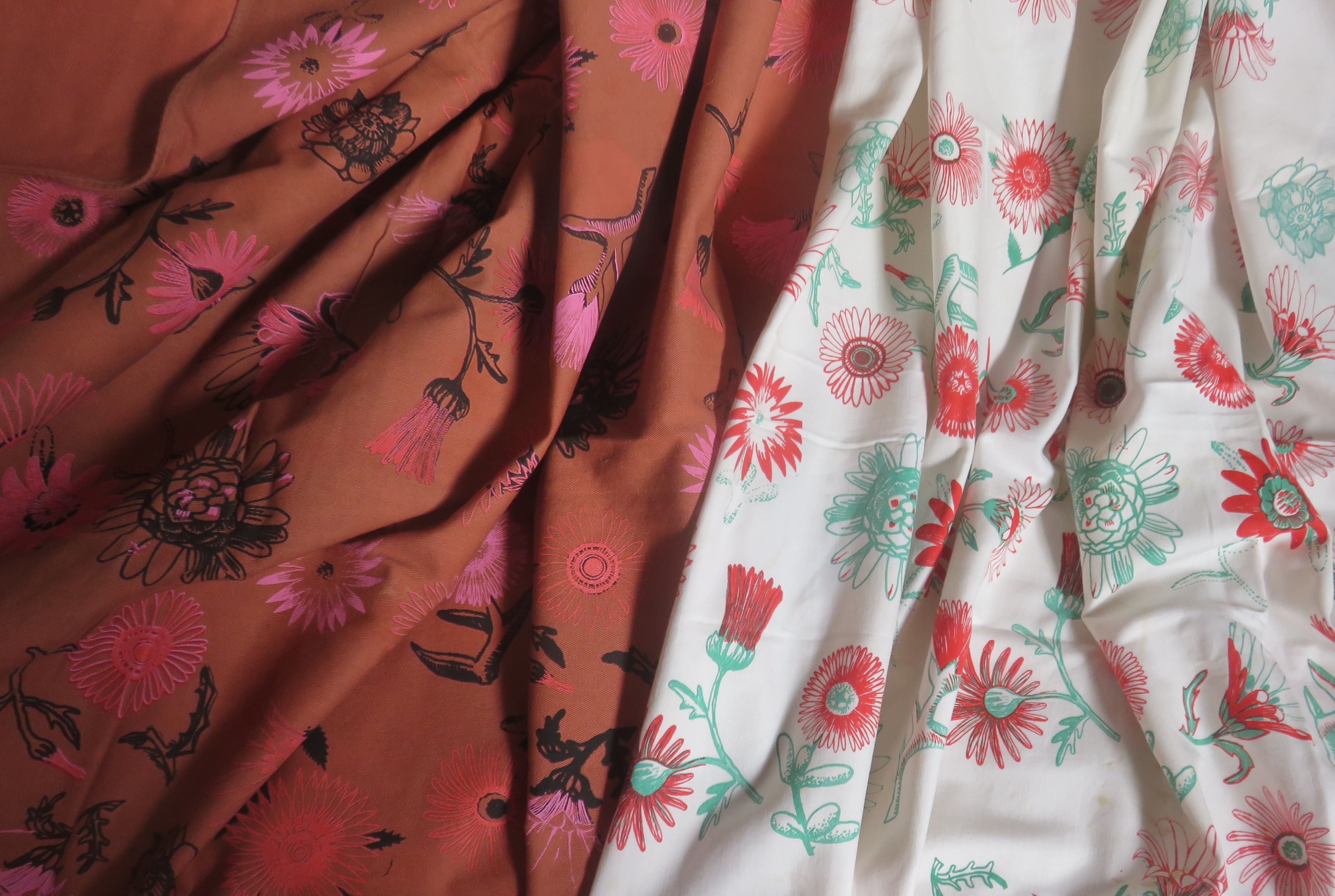 The primal beauty of
spring flowers

I made this simple design of Asteraceae, or indigenous plants in the daisy family from South Africa to try and recreate the feeling of spring time on fabric. You can purchase this design on clothing, accessories and decor items at our store, here.

In our spring, from about September to November, the dry summer coastal areas of the Western Cape of South Africa burst into bloom. As one walks through the fields of fleeting green, the surface beneath one's feet is like a heaven of bright differently colored stars, or a rich and beautiful Iranian carpet. Actually, there are no words to describe the feeling it gives, and no art which does anything more than suggest this beauty.

Seeing those flowers excites something deep in my animal brain. It is like a door opening into a long long vision of time, a view of future and past generations. I become acutely aware that this is one spring, among millions, and I am just enjoying the flowers with all my senses, like a beetle or a butterfly would, I feel small but deeply happy.

If modern human beings originate in the Cape or spent so many millennia here, this response may be hard wired, and I'm not alone in my instinctive reaction. In the fields of flowers, I'm overwhelmed both by a mild religious ecstasy, and romantic feelings. Perhaps our ancestors in deep time reacted similarly to the flowers of spring.

The visual display of diversity

In this fleeting spring display, in areas which have been protected, the seasonal vleis, or shallow wetlands, which dry up in the heat of summer, are full of flowers. The insects and plants make the most of this window of reproductive ease. Geissorhiza radians, the jewel in the Cape's floral crown, a deep purple and red that are unnatural in their intensity, floats amid reflected clouds and blue sky in the shallow water. Small orange Gladiolus, dark purple blue Babiana, seas of nodding pink umbrella shaped Monsonia, yellow, or white Spiloxene stars with a peacock centre, the glowing spikes of Kniphofia, and smaller Lachenalia, in many colours, tiny orchids, Albuca's pale green bells, the red glistening Drosera, Ixias gold and pink, a range of Romulea reds, white chinkerenchees, a few late arums, blue flax waving above, sunbursts of Carpobrotus or ice plants, lie at one's feet. Other members of the Asteraceae, like Arctotis, Dimorphotheca, Gazania, and their cousins, cover the ground in sheets of flame red, orange, gold, and white. These are just the plants that make an impression with their numbers, size, or intensity of colour. It is the tip of the floral iceberg.

Choosing Asteraceae to limit the visual diversity for designing

There is such a diversity of flowers of many families and genera, it is impossible to really capture that diversity with a camera or in a design. The flowers embedded in the rich hand dyed wools of old Persia are merely a dull sign of this brighter reality. When designing a spring floral, I also had to reduce the abundance somehow, to something that could be expressed in two dimensions with print colors, and make a rhythmic pattern. I chose to restrict the design to one family, Asteraceae or the daisy family. They are a very diverse group, especially at the Cape, and they have mostly radially symmetrical flowers, which similarity is nice for rhythm in designing. As you will see, there is still a lot of variation in form. 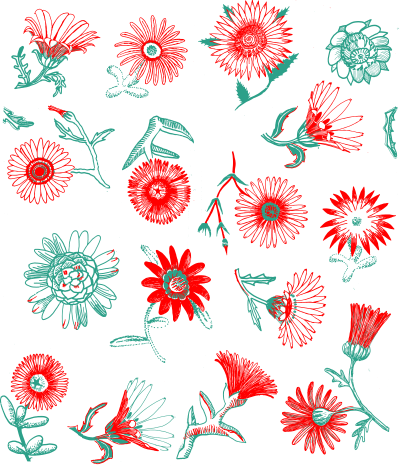 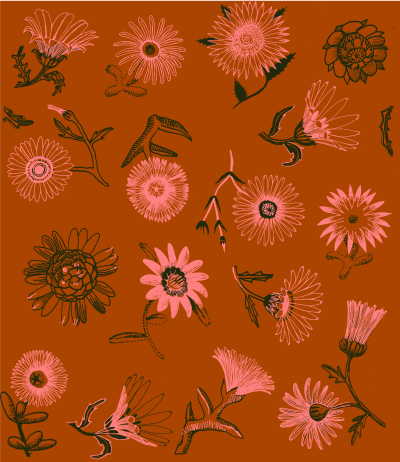 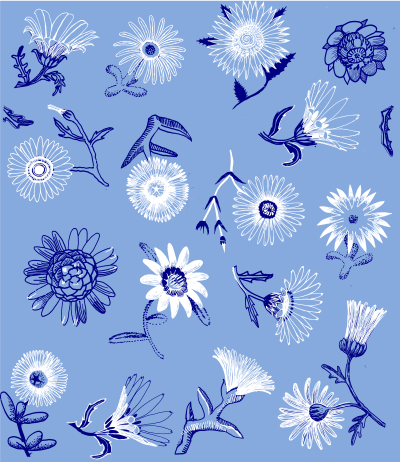 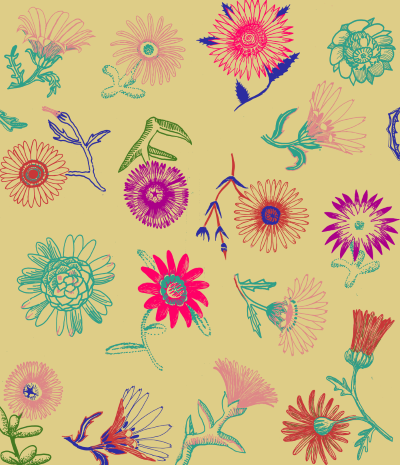 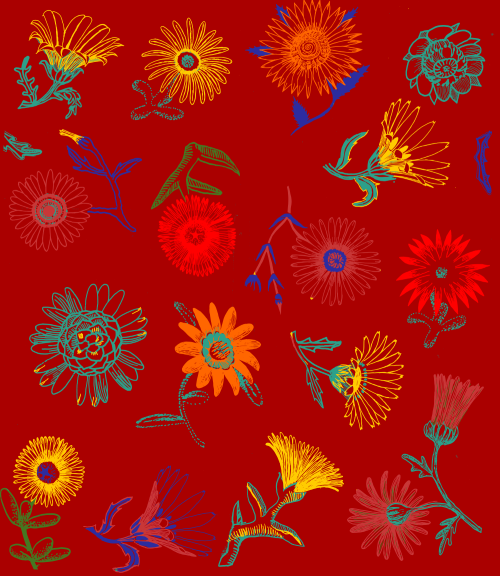 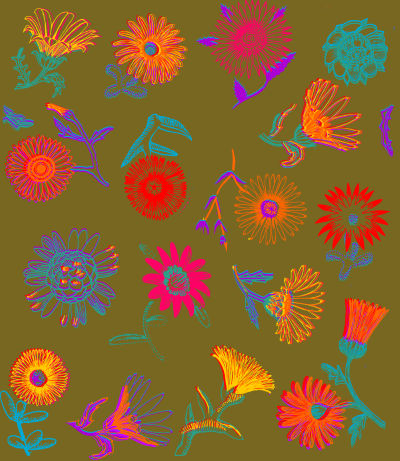 Digitizing the original ink drawings of this Asteraceae design took the color in two directions, one into the more classic colors of natural dyes found in chintz (madder and indigo) and one into intense unnatural colors. For a screen printer, making flat color separations the old fashioned way, rather than using dots (the screen printed version of pixels) from photographs, this progression is just a squeegee stroke away. Screen printing leads to color accidents quite often, and allows this kind of freedom.

I am so familiar with these flowers, these icons of South African botany, having been in Darling every year for decades selling my cloths, that seeing them in wild new colors gives me a thrill of strangeness. I must admit I've fallen in love with some of my accidents during the digitization process. But there is something else. Many local artists love extremely bright color and its been around for many generations. Its possible I like such pure incandescent color because I'm South African. Pushing some of the flowers out of register, so that its like seeing double, just increased the appeal of abstraction and strangeness for me.

Surprisingly, I find that in essence, these intense colors I've given to the Asteraceae, come closer to conveying the hyper real experience of walking in our carpets of spring flowers, than my subdued screen-printed fabrics from long ago. 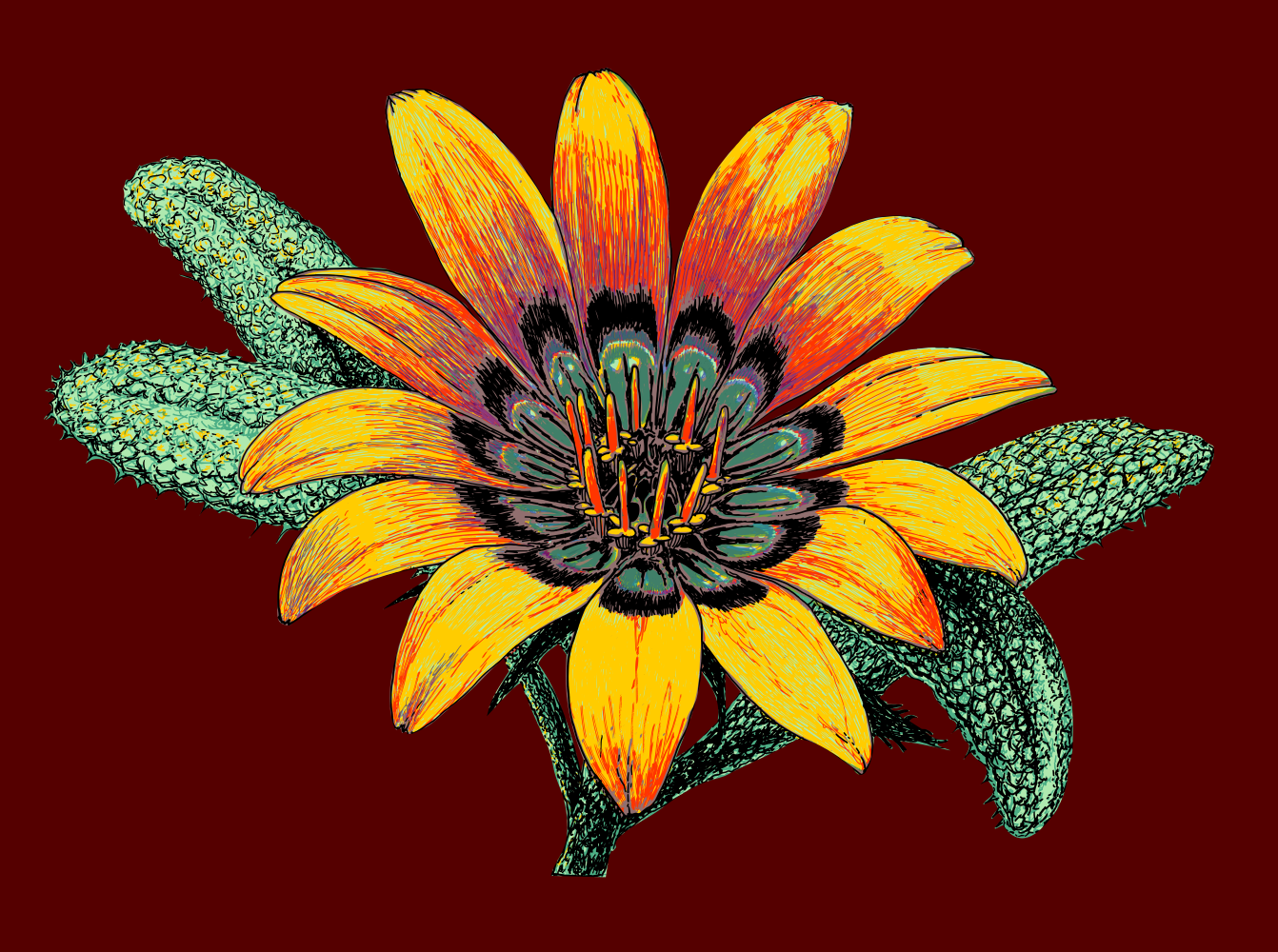 Gorteria diffusa is called beetle daisy in English and Katoog or cat's eye in Afrikaans. G. Diffusa is in the Asteraceae family and shows enormous regional variation in appearance and number of ray florets, with fourteen discreet varieties. Like many South African and especially Cape plants, it was first described by Carl Thunberg, and that in 1798. Since then it has been shuffled around taxanomically by many botanists, perhaps due to the large variety in form that it shows. G. Diffusa is found in South Africa and Namibia, and is endemic to the area between the Orange river and Clanwilliam. The region has cool wet winters and hot dry summers. It is an annual. The seeds, called cypselas, remain attached to the flower heads and can even germinate there. They can germinate one at a time over several years to bridge drought periods. It has a creeping habit and flowers in August and October in our spring. Some varieties  showing fly mimicry to attract male flies. It is visited by generalist insects like monkey beetles and honeybees, but also a species specific bee fly Megapalpus capensis. The male Megapalpus being attracted to the raised black markings on some of the bracts, near the flower center, which look like the body of a beetle. Here is a link to the design.

home page for links to articles on regeneration, perennial food plants and permaculture

Background to our flora and fauna designs