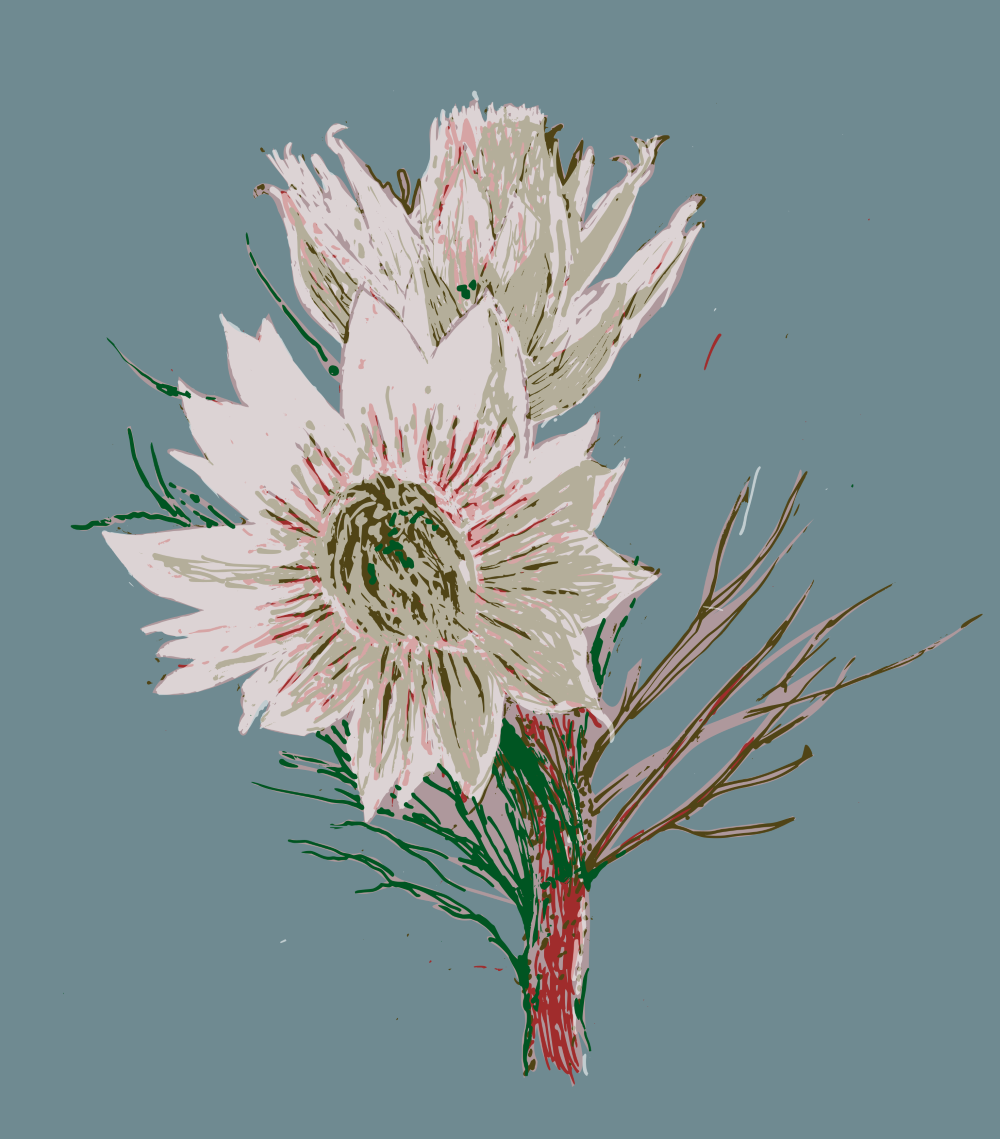 The blushing bride, as it is most commonly known in South Africa, has papery flowers infused with the most delicate pink, that appear in winter and spring at the Cape. The prolific flowers are borne on an erect shrub with fine needle like leaves. You can purchase our clothing, accessories and decor items printed with wild flowers, including the blushing bride here.

A bouquet of names

The genus Serruria is named after a botany professor at the University of Utrecht in the 18th Century, James Serrurier. The species name florida means free flowering, or with abundant flowers. The genus has common names: spiderheads, curly spiderheads or spinnekopbos in Afrikaans. Some authors claim this is because of the fine leaves, which look like spiderwebs and some the flower heads which often have a woolly tangled appearance like a woolly spider. Serruria florida itself is declared the most beautiful of the Serrurias, and is commonly known as skaamblom or shy/shame flower, pride of Franschhoek, or trots van Franschhoek in addition to blushing bride

There are apparently many versions of the legend surrounding the name blushing bride which also revolve around shame, shyness and pride. One version is that suitors wore the flower in their lapels when intending to propose, another that a maiden would be presented with the flower at the proposal. The depth of its pink was a sign of the gentleman's ardor, in response to which said maiden would blush. This doesn't make much sense to me. It has to have an opposite, and I can't imagine it being a good strategy really, to go and propose with the palest flower you could find to show your lack of ardor. Perhaps the maiden responded with a flush too, in this case a flush of rage, and threw the flower out of the window.

Another version is that the French Huguenot farmers would present their loved one with a flower at each visit, and the deeper the color the closer they were to proposing, and the more the maiden blushed. I imagine some farmer of yore clambering half way up the mountain and only finding colors lighter than the one presented at his last visit, and not being able to summon the courage to visit until next season. This legend is a romantic but implausible story, requiring extremely delicate feelings in both parties and extreme athleticism in the male.

Others say that the flower resembles a bridal gown, or that it is often found in bridal posies. It is certainly a presence at weddings today, and frequently used as a lapel flower at such occasions.

The uses of Serruria florida

In horticulture blushing brides are a popular cut flower and garden plant. The papery bracts of the flower means they last long in flower arrangements.

Because of their acceptance as lapel flowers, when I thought of indigenous flowers to use for a design for breast pockets, I chose Serruria florida. It is meant to be printed very small, with the flower not more than life size, the size of an apricot, but preferably smaller.

They are exquisite flowers singly or in larger arrangements. I think they are better mixed with other foliage and flowers that contrast with them in colour and tone. In a 'monocultural' arrangement , a bos or bunch, they can look like an untidy and tired mass, and lose their delicate outlines, and the strong impression of their subtle, delicate colour.

Serruria florida in the wild

Serruria florida's natural habitat is the mountainside above Franschhoek, or French corner, so called as many of the French Huguenots settled there. It prefers soil from degraded granite.

The flowers are insect pollinated, and natural propagation is highly dependent on fire, as the seeds will only germinate after fire. This puts them in competition with post fire germinating exotics like Hakea.

Serruria florida is critically endangered, threatened by invasive species which proliferate in the fire prone Fynbos. In addition, immature plants do not produce enough seed to replenish the seed bank, and the fires are too frequent. Young plants can only produce seed after two years. They produce nut like seeds about two months after flowering, and ants carry them underground.

Other Serrurias which are critically endangered due to fire and urbanization are the strawberry spiderhead S. aemula and the Kraaifontein spiderhead, S. furcellata.

It is possible to grow Serruria florida from cuttings, and from seed. The former is recommended. I have not tried growing them so its best to do your own research. They sound quite demanding, and growing techniques are used that are against the ecological gardening ethos of this website, which is anti poison and irrigation.

In the garden it grows well with Restios, Ericas and Protea companions, in a well drained sunny position, and is water wise.

Serrurias are a type of Protea. The family Proteaceae has 5 subfamilies, 9 tribes and 19 subtribes. Some of them are from other continents, as this family is very ancient and predated the Pangaea split. Serruria belongs in the sub-tribe Leucadendreae with the well known Fynbos plant groups Leucodendron, Leucospermum and Mimetes.  There are 55 species of Serruria.

Serruria flowers consist of a cluster of smaller flowers, that are so tiny they may look like threads. They are called spider heads because most of the other plants in the genus have a cluster of tiny flowers that either stand stiffly upright or curve wildly in different directions. They are often fluffy, and colors vary from white towards pink or orange and yellow.

In the blushing bride the Serruria flower cluster is dark pink or pinkish white and is surrounded by translucent papery whites bracts that the non-botanist eye will see as the 'petals'. Asteraceae also have 'flowers' which consist of many tiny flowers, hence the old family name Compositae. The white 'petals' of the daisy are also bracts.

The botanist John Rourke recently described four new species of Spiderheads. He ungrouped S. effusa and S. cygnea which have different behavior after fire. The latter is a resprouter, and also hairless. The new species are from isolated locations, such as the Citrusdal area and Koue bokkeveld, Riviersonderend and on the Palmiet River where S. deluvialis is threatened by dam building.

Saved from the brink

Serruria florida was first recorded by Carl Thunberg, in 1773, and then remained unrecorded for 110 years and was believed to be extinct. Probably that was due to over harvesting by young Hugenot farmers, if the legends are true. Certainly the timing is right. It was found again a hundred years later by Professor MacOwan, and a few precious seeds were taken to Kirstenbosch National Botanical Gardens and propagated, and this was the mother stock for all horticultural propagation since.

My sources are all online at the moment:

home page for links to articles on many other plants, natural gardening and permaculture

background on our flora and fauna designs