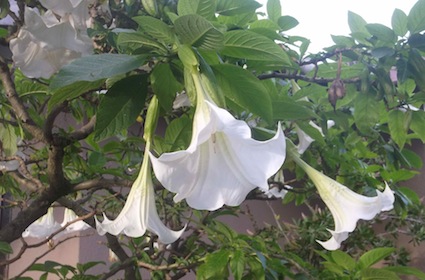 July flows into august with a celebration of white flowers

This month's white flowers are a splendid showcase for the season. As the weeks flow past the fluctuations in flower numbers follow one another swiftly. Compared to July and early August with its sprinkling of first flowers, such as Cotula, and Oxalis, and the occasional Arum Lily (Zantedescia aethiopica, in isiXhosa intebe in isiZulu ihlukwe (www.plantzafrica.com)) there is an explosion in numbers as August wears on, and rapid appearances and disappearances, such as that of blossoming Prunus, and the vanishing of carpets of Cotulas. It was hard to cover everything. The problem is where to start. I think it will have to be with the indigenous flowers which set the baseline of the seasons. 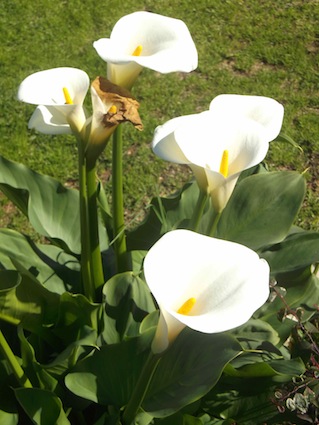 the indigenous paradisium of july gives way to opulence

As I touched on in the article on July, the earliest harbingers of the season of flowers are the tiny stars which come up in the fine, dense, glowing grass, with its diversity of fresh and deep greens from the winter rains. Suddenly this green velvet is dotted with small pink, white and yellow flowers, resembling the Paridisium of Medieval European gardening, in which green flowery green sward was a symbol of paradise. I cannot understand the strict grass monoculture and aversion to flowers in the lawn which has since taken over the lawn meme. The return to ‘meadow gardens’ is a blessing. Indeed the sight of the lush grass and the starry flowers stirs a feeling in me of bliss and excitement, and I cannot but think that it is an instinct going back very far to my herding ancestors, informing the cells in my body that good times are ahead, and the sheep are fat. In this part of the world, the small flowers in the grass in suburbia are the pink Oxalis, and a week or so later, Cotula, the latter being the first white flower. It soon spreads in vast sheets and is passing by August, dusty and tattered. The Arums first appear in July in Goodwood gardens, and really fatten out in August, by which time some clumps already show spent blooms. 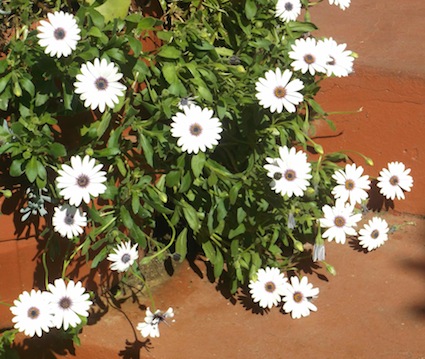 As August moves on, more and more flowers join the crazy celebration. The white Arctotis really proliferate and cover the plant, the indigneous starry wild jasmine (9 petals),  (Jasminum multipartum, in isiZulu Imfohlafohlane) which has spent weeks positioning lipstick red buds in a vertical array, suddenly opens all at once and pours out its gardenia like perfume on the air. Some similarly fragrant white 5 petalled florets appear on the prickly Carissa bispinosa. (isiZulu Amatungulu).The ubiquitous pavement plant, the hardy wild iris Dietes grandiflora and the ubiquitous money tree (Crassula sp.) are in bloom, as are the fluffy kapokbos (Eriocephalus sp.) of the Renosterveld and the fragile appearing denizen of the Fynbos, Coleanema album, or confetti bush, which are both available in nurseries. 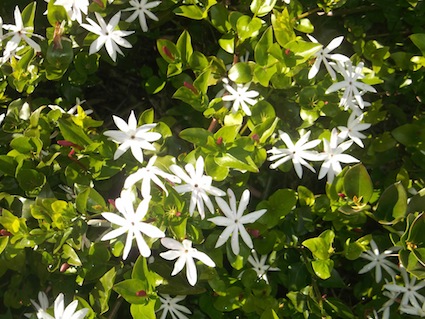 Some exotic succulents such as Kalanchoe sp. from Madagascar, begin to flower too, for example K. luciae ? with tall spikes of tiny, slightly hairy off-white flowers, and Crassula spathulata ? a common groundcover in this region, puts out tiny white pointy petals. Other exotics also flower such as sweet alyssum (Lobularia), white banksia rose (Rosa banksiae), butterfly bush (Buddleia sp. white varieties), Apple (Malus pumila varieties) and many Prunus are in bloom. Prunus is the genus of stone fruits such as cherries, apricots and plums. Common jasmine (Jasminum officinale) is covered in white in late August, white Azaleas (Rhododendron sp.) are looking bridal, and the largest of the white flowers which are common in our neighbourhood, locally know as moonflowers, or white angel trumpet flowers (Brugmansia candida), hang their fresh white exquisitely perfumed bells from crooked stems, on the cusp between August and September. 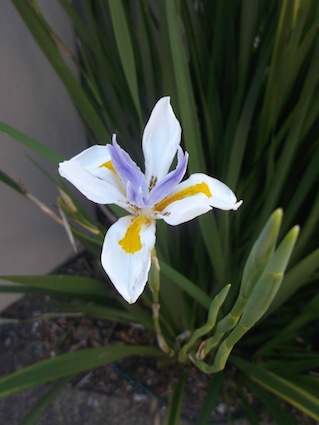