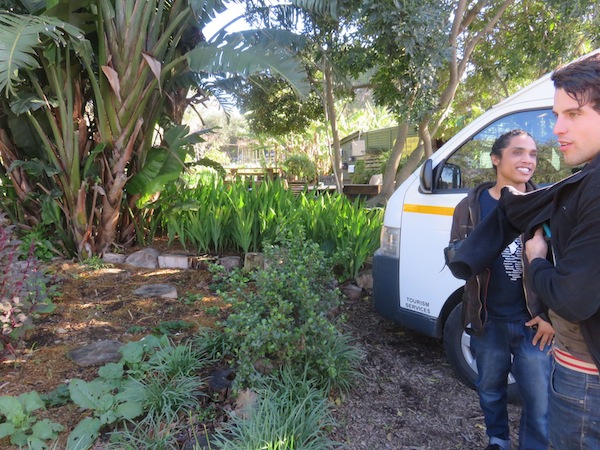 at Soil for Life

This week I did some garden touring with Guerilla House quite unexpectedly.

I went to my weekly volunteering day to find they were taking some university students who were learning about permaculture to look at food gardens in Cape Town.

It was the student’s last day in Cape Town so it was a memorable occasion for me, and turned out to be most inspiring. 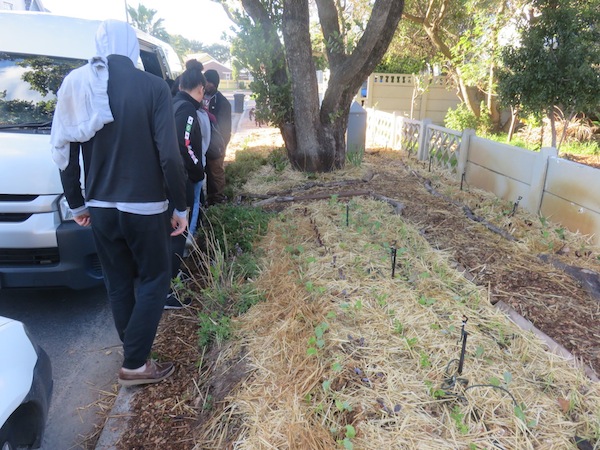 leaving the Imraan's garden for a day of garden touring

The day took in four important urban food gardens in the city, that I’ve been longing to visit: the Rastafarian Community Garden, Soil for Life, SEED and Moya we Khaya. 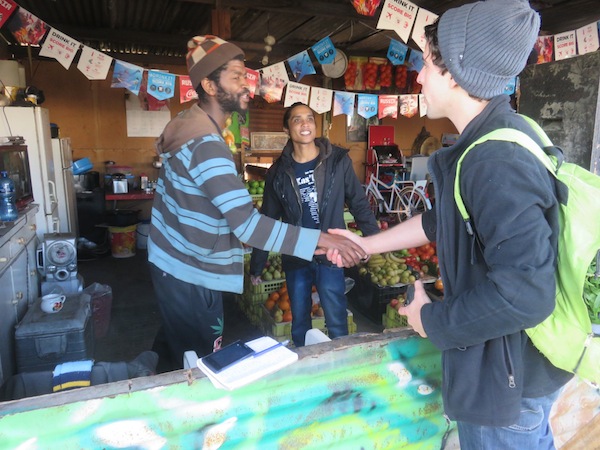 Meeting Daniel in the shop next to the Langa food garden

The Rastafarian Community Garden in Langa 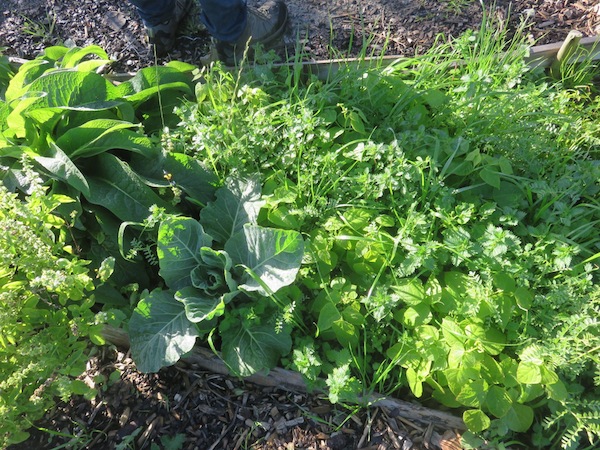 A triumph of the fertility work done on sand

First off was the Rastafarian Community Garden in Langa. I was there a few months ago to attend the Guerilla House workshop ‘Make it Fertile’ that dealt with about a dozen ways of increasing soil fertility. The gardeners there have been applying these principles. I gasped when I saw how the garden had grown and vegetative cover had increased, and it was looking so lush and green. 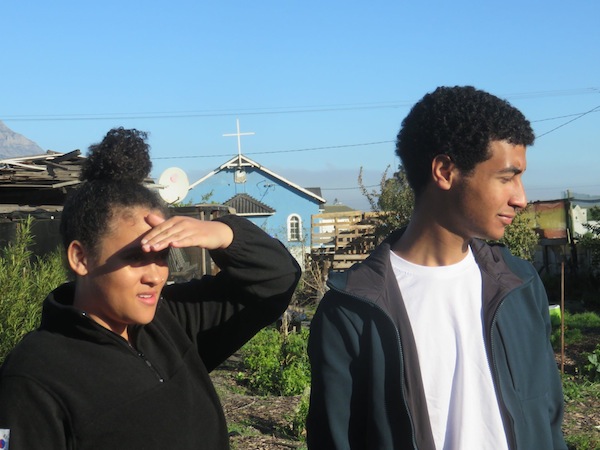 We start the food garden touring in the dewy early morning

I took photographs of all the different plants I saw, and noted the varieties, and got to about 60 different plants and counting. Its such a fabulous thing to see so much diversity in such a new garden. I think its less than a year old now. 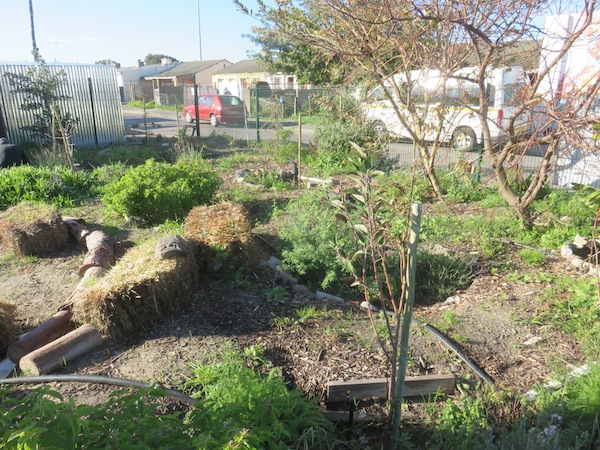 an overview of the urban gardening project in Langa

Soil for Life in Constantia

The next place we visited was Soil for Life in Constantia. It has been going for over two decades. Imraan told us that this is where he first learned about organic gardening. I hope I’ll be able to intern there too, even if its just to ‘skollie’ plants (hee hee), because there I got to about 80 plants and counting. 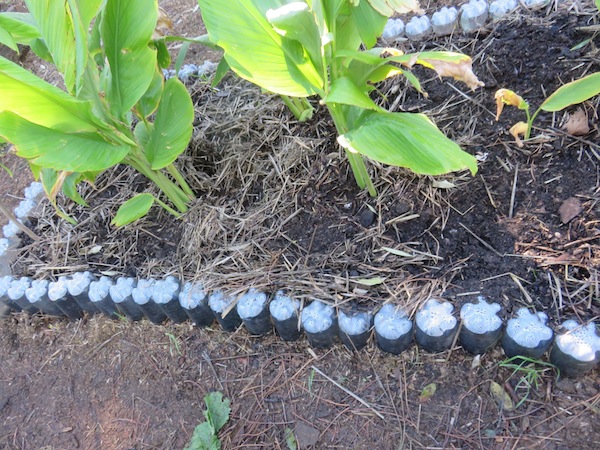 The dark black soil and passive irrigation in tumeric patch

I’ve been growing tumeric on my windowsill and then in my gray water grow beds. The tumeric at Soil for Life was so big I thought they were banana trees at first ! Notably the soil in the tumeric bed was very black, it looked like a very high ratio of vermicast or rotted manure had been added, and the bed was surrounded by passive irrigation in the form of water filled bottles which had been turned cap down. The caps probably have little holes in them to supply a constant trickle of water on demand. 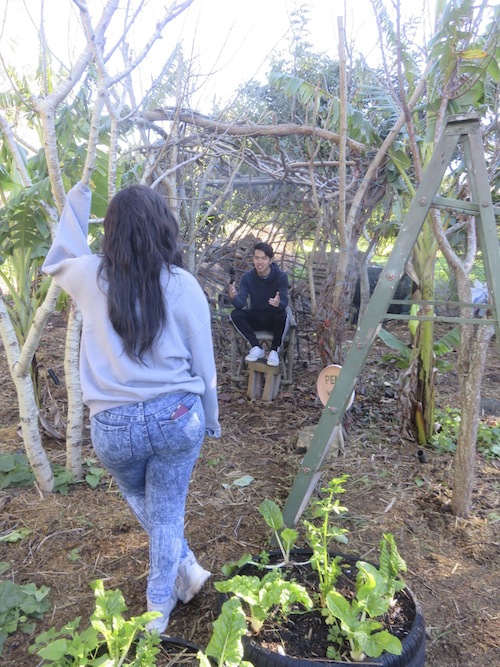 and even the conversations on this soil are fertile

Food garden touring and its lessons in this city

Something which made the food garden touring so interesting was the question of soil. Constantia is on clay, site of some of the oldest wine lands at the Cape. Here nearly anything grows according to Josh and the soil is highly water conservative and full of nutrients. They are so lucky about their location. The other gardens we saw on the day were all on deep Cape Flats sand, like my garden and Imraan’s garden and they have to have a lot more fertility work done to them for a good yield. 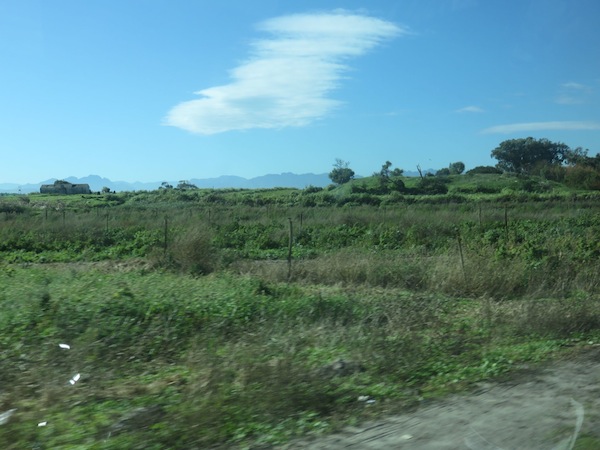 a lush corner of the Philippi urban farming area

After Constantia we headed through Philippi, the breadbasket of Cape Town, as Imraan called it, on our way to SEED in Mitchell’s Plain. We went on a back road I’ve never traveled before on my explorations and it was hard to imagine we were in the middle of a metropolis. One would not imagine garden touring to be political, but it did often touch on politics, power, and issues like group areas and who got the good soil in the metropole.

Food growing is globally highly political too. We heard of the controversy around the possible loss of much of Philippi to urban development, and moments of heartache ensued as I was reminded of the long exhausting campaign to save the Philippi Horticultural Area headed by Nazeer Sondae and others, as I saw some beautiful green parts of Philippi for the first time, and new they would not be thus for long. 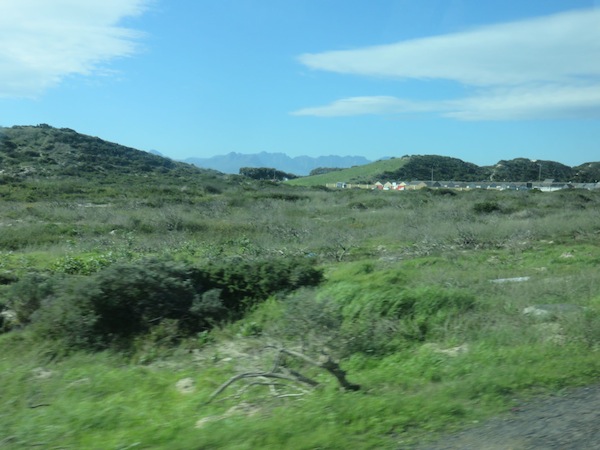 Talk about sand, we approach this section of Mitchell’s Plain passing sand dunes as high as small mountains which are covered with stabilizing indigenous vegetation that I love so much. It is so beautiful and functional, holding up through the worst drought in a century, preventing the sand from blowing away, and judging from the greenness of the area, harvesting water from the sea air on its myriad tiny hairs and spiky fine leaves. 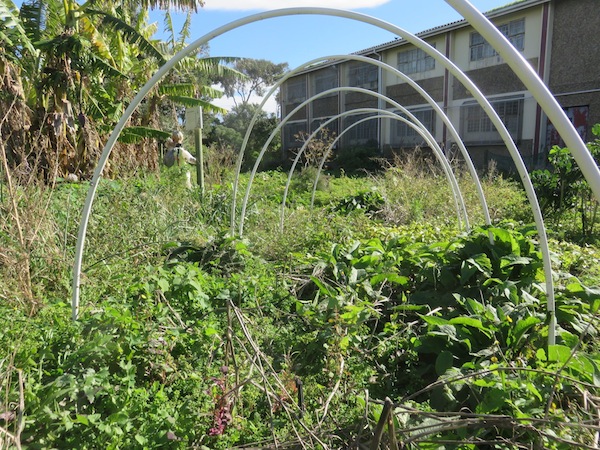 Some of the equipment in the production garden at SEED

When we got to SEED I was excited to see this amazing hub of urban permaculture. We saw the seed garden that I wrote about in a previous article. It’s a garden in which so many young people in Cape Town got their first green education and it deserves the TLC that Imraan and Josh are going to be giving it. 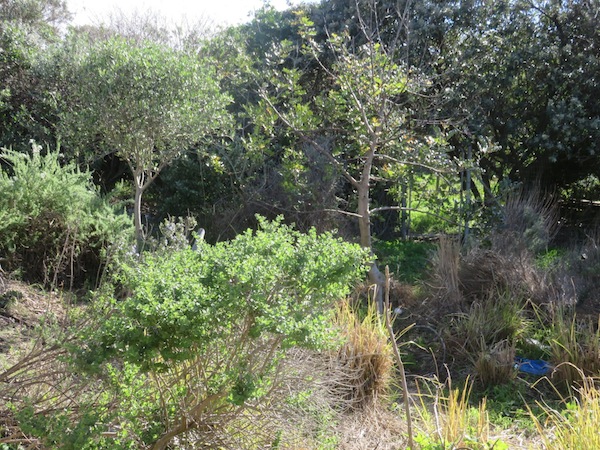 Part of the food forest at SEED, thriving despite drought 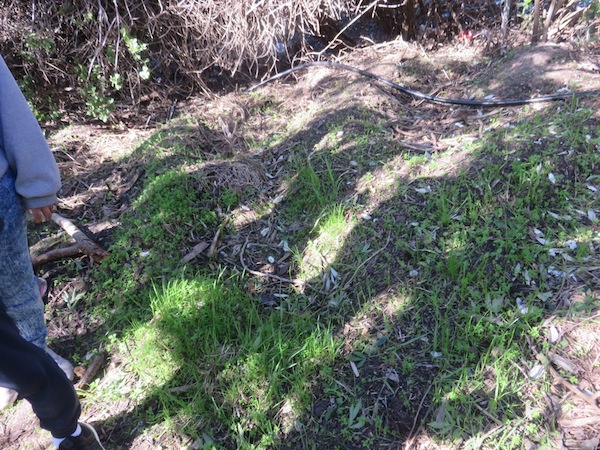 The food forest along the perimeter was in a much better state than the annual vegetable garden, even after the drought, showing how resilient agroforestry can be. It has also recently been tended by Josh and Imraan, where they dug some tree pans to hold water around the trees and it was holding up really well. I hope I will also be involved there when they go once a month to do some maintenance. 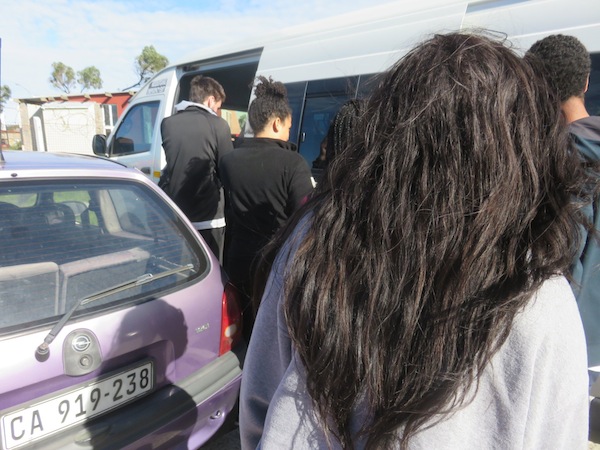 Moya we Khaya
in Khayelitsha 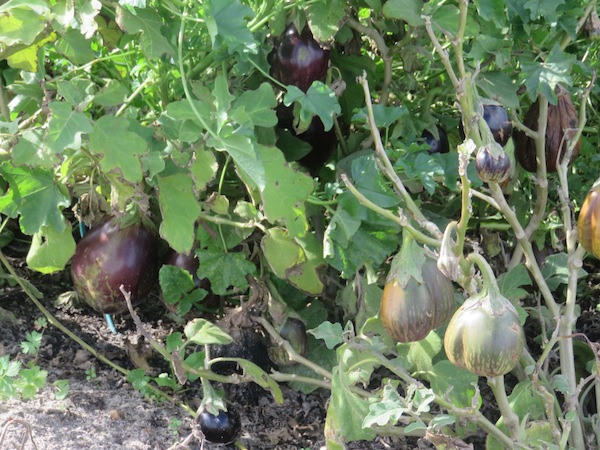 Such a fruitful place

After that we headed east along Spine Road to Khayelitsha and Moya we Khaya,  translated as spirit of home by Xoliswa who welcomed us to the garden. My camera was running out of juice by this time, so I only took a few pictures, but you will see that the garden is amazingly fertile. One of the students remarked that farmers in the US should not be complaining about soil, when you see what can be done with organic farming even here. 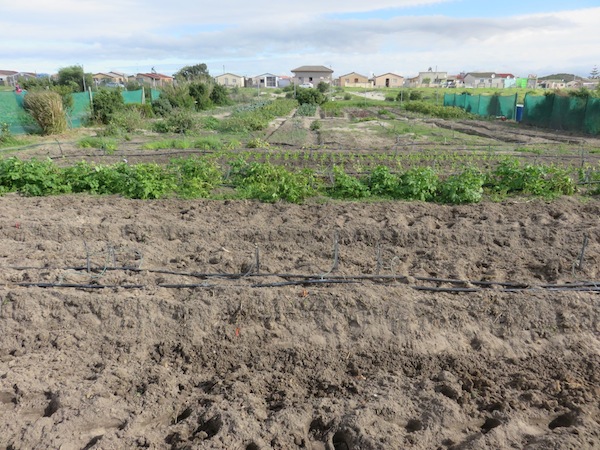 another urban gardening triumph in Khayelitsha

In Khayelitsha, like Mitchell’s Plain, the sand is meters deep, and our soils are some of the most ancient, leached and infertile ones in the world. Add organics, and voila…. Unbelievable abundance. The whole group were impressed at the existence of the gardens we had seen in areas with few financial resources.

I’d add that the environmental resources are also not conducive, and growing things here is a triumph of the ‘can do’ spirit and resilience of Khayelitsha residents. Food garden touring involves painful insights about this anomalous country, but in another way it is also a very positive experience. 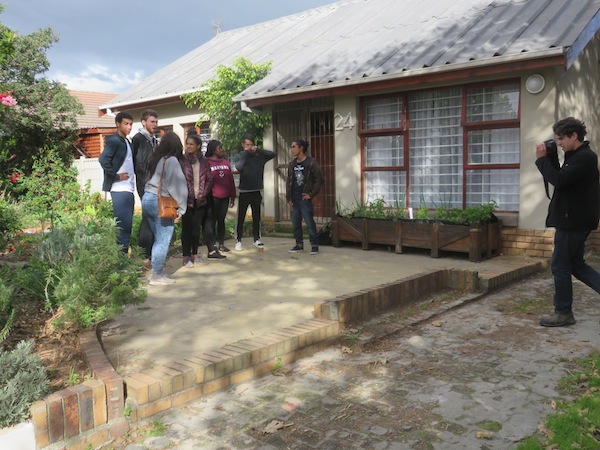 taking the parting shot back at Imraan's garden again

We headed home, rounded off the garden touring with some sharing. It was so enriching to see these gardens through the eyes of people from another country. I hope we were all left with hope and inspiration. For me I cling to these hints that things can be rebuilt and there will be a better day one day under the watching blue mountains ringing this sea of sand known as the Cape Flats that is the scene of so much bad history, bloodshed, deprivation and environmental degradation. 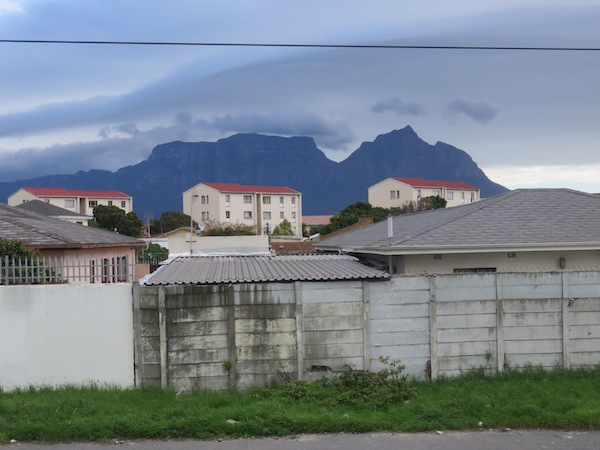 view from the taxi going home

other pictures from the day: a food garden touring album