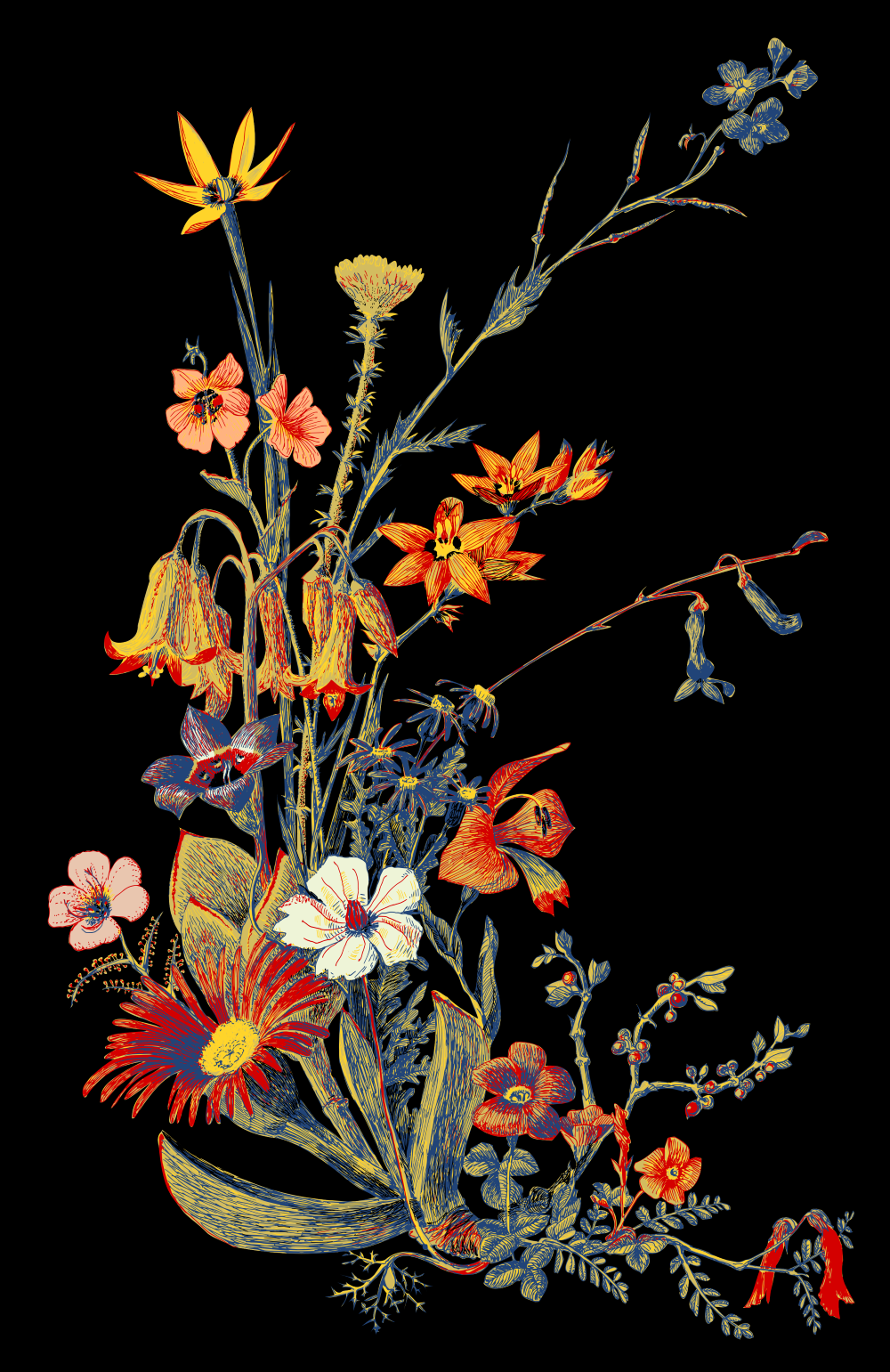 Our Darling wild flower design from 1995

This is one of our oldest screen printing designs, and the second or third version of the design using the flowers of Darling. It has been recreated for printing anywhere in the world, and you can buy it on a range of more than sixty items from stickers to shower curtains

When I made the first design in 1994, and printed a hundred t-shirts, they sold out in a day at the Darling show. I was amazed, and proceeded to make improvements to the design. However, I soon found out that this was a very niche market for the design. It did not sell as well in other venues, especially at the tourism hot spots. But in time, with other flower designs added to the arsenal, it did make us a small living in curio shops countrywide, and through Kirstenbosch National Botanical garden shop.

The wildlife of Africa is not merely comprised of large animals

It is through this catering for the tourist trade, that I came to know that someone can visit a place that is an ecological miracle of incredible richness and it will just remain invisible to them, and that they are far more interested in going home with the same image in their mind that they planned on capturing when they set out from Dusseldorf or Manchester. It was more important for the average visitor to Africa to bring back a trophy of the hunter's 'big five': the buffalo, rhinoceros, elephant, lion and leopard, whether dead and stuffed, or a printed image on a t-shirt, than to discover something new. This poured cold water on my eco evangelistic enthusiasm for a while.

The beauty of Renosterveld cannot be captured by
any wild flower design.

My message to people from other lands is that the Cape Flora is one of the jewels in the botanical crown of the world. Just let your eyes wander over unspoiled native Fynbos, and you will see a beauty that surpasses any other if you have eyes for it. Complexity, strangeness, subtlety of color and form. It is not for nothing that our flowers form such a large proportion of the horticultural industry of the world, but these flowers are just the tip of the iceberg of Fynbos ecology.

A walk in the Darling Renosterveld, between white dunes and grey granite outcrops will show you the colors of the finest silk textiles from India or Afghanistan, a hundred golds, a palette of deep browns and blacks, a riot of reds, oranges like tongues of flame, a range of misty greys, and greens without number lit with stars of blue, purple, magenta and white. The garden flowers have a backdrop of mosses and lichens, thatching reeds or restios, larger leaved bushes, and strange two leaved bottlebrush bulbs, fine spiky plants and scented herbs with foliage of grey, black and a miriad shades of green. That is the Darling Renosterveld.

Background stories of the plants in our wild flower designs

I try to cover the background stories too, about the insects and larger animals and the people which have relationship with the plants in my wild flower designs. Our unique soils are another strange phenomenon. Some of the most nutrient poor in the world, so they say, and yet they brought about this abundance of floral beauty ! As a soil advocate I have my own theory which explains how the plants were well supplied, in a manner which mineral fertilizers cannot deliver, but that is a story for another day. Many of our plants are difficult to grow and they are a textbook case supporting imitation of nature for the best results. Just take the fire dependent propagation of our plants in the wild, which is imitated by introducing the seeds to a smoke solution.

Which flowers are found in this wild flower design, and why ?

These flowers were suggested by my mother as frequently found at the Darling Wildflower show. At that time she was chief identifier of the plants at the show, an amateur botanist who was doing plant lists on a number of West Coast farms in the area. For days after the show or a plant collecting trip she would sit with a microscope to be able to discern the characteristics of the ovary, anthers, stem sections and other flower parts which separated a genus, or a species, from similar appearing plants. The living room would be covered with plants in plastic bags arranged somehow or other, which only she understood. She did the plants with large flowers, and those so tiny that the microscope was necessary to see them at all. She learned all the families except grasses, as there were not many, and restios, which she entrusted to the global experts at Kirstenbosch.

How the Darling district became recognized as a botanical paradise

After first being laughed at, my mother bombarded our National Botanical garden with those plants she was unable to identify or unsure of, until Kirstenbosch began to take an interest in the area, previously thought too degraded and low in species diversity to be of interest. Time proved her early critics wrong and it became a study area for many. Her plant lists were exploited by many people, but she did not earn anything from them. She even contracted tick fever many times.

She did not bring about the shift in interest in the area alone, however. It took years of persistence from local people who were conservationists to create a groundswell, and to turn the Darling Show into a conservation showcase that draws botany geeks and visitors from all around the world. The local people have carried the wave forward and are part of a network of serious conservationists and conservationist farmers in the Fynbos biome, recording more data on the occurrence of species especially red data species and acting as citizen scientists researching conservation practice.

The flora and fauna in our designs