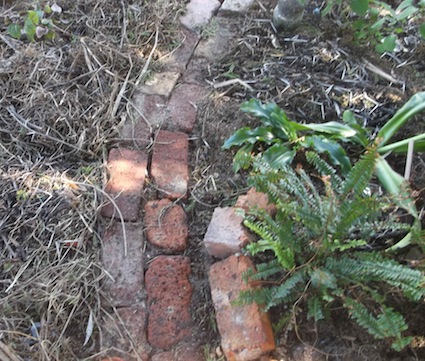 I will explain below how to lay out the simplest garden path, a paths for dummies, a can't go wrong sort of path. The area under the large Acacia karoo is shady. Out on its edges, near the concrete pit, there is some sun at midday, and along the fence at its northern edge, there is sun most of the day in winter. The paths would attempt to put a line around these areas to enclose the different types of planting for different light conditions, as well as provide access. Below is a view of what the section of garden looked like before planting out. The small shrub in the middle is my furry friend’s favorite decorating point. The Salvia that you can hardly see, which grows next to it, seems sensitive to this and struggles on the edge of life, with mostly dead and withered branches, but has made a huge recovery since planting the bed. 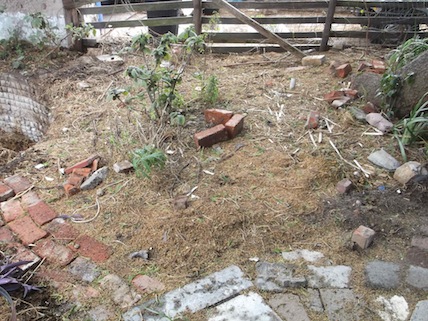 But before doing any planting I first needed to lay the garden path for easy working access that I had plotted on my plan. I laid them slightly differently to the design in the plan, as the best solution actually came to me on the ground, as I prepared to work. I used a double line of bricks. It is just wide enough for comfortable sitting and secure walking, without taking too much room, and it lays fast compared to broken bricks.

First of all I laid out a line of bricks to one side of where the path would be. The path will skirt the tree and the densest shade. I adjust the bricks by eye until the curve was right. It is not a circle and I couldn't use measuring equipment to get it right. 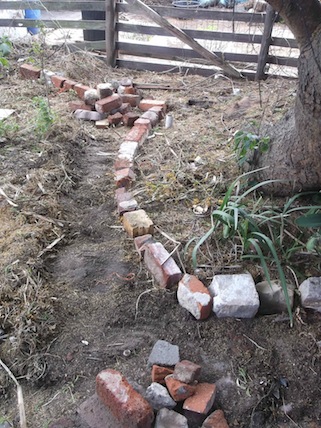 outlining the garden path and clearing the earth

Below you can see how I laid the garden path after this, first scraping the earth flat with a trowel, and then laying the bricks nexto the line I had made, using up the bricks in the line as I went. I covered the laid bricks with the sand I had removed to lay the path, and brushed it into the cracks between the bricks with a broom, and shored them up at the sides. This stabilizes them nicely. 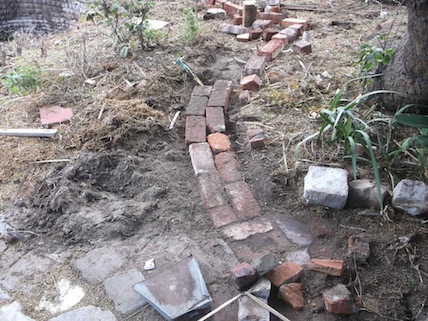 Finally the garden path was finished, and I could start planting. You can see the path curves around the deepest shade at the bole of the tree, a huge umbrella shaped African thorn tree Acacia karoo and then veers to the left along the fence where there is sunny spot. The A. karoo is usually not so big, but this is the result of 15 years of vermicomposting at its base. The path is a working path, laid out with ease of access to all areas of planting, keeping in mind limitations like my arms length, secure walking  surface while carrying heavy watering cans and comfortable place for squatting on the earth while weeding.

On the day of planting I returned to my garden plan, and got the right plants lined up ready for planting out. However, the first object was to deal with the plants which had to be moved around. The sword fern was suffering, the irises were not flourishing, and the philodendrons had been moved to take the place of the aloes in the big pot. 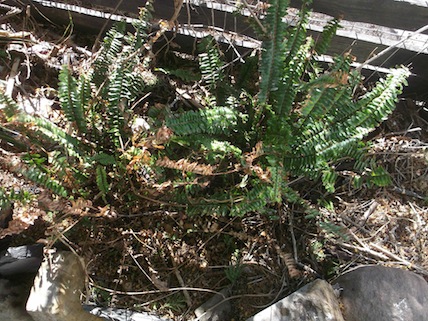 The sword fern was growing where it catches the sun in the afternoon. Combined this with the earth it was planted in being choked with dead morning glory vines that keep the area too well drained, and the fern was going brown. I’ve replanted this area now with sunloving irises which I removed from the dark area to which the fern is going, and they are also doing better and expand the already existing iris bed which adjoins them, providing for visual continuity. Some of the irises also went to fill the gap where the philodendrons had been and neaten up the line of the iris bed up to the  massive tree root which edges it. In the picture at the top of the page you can see the fern, replanted after laying the path, with a berm supported by bricks to make sure the moisture penetrates this oily soil. A few days after being transplanted it began to put out new fronds.

After transplanting those plants which needed to be moved, I began to plant out the shade loving indigenous plants from Granny’s Green nursery at Grand West Casino, which I’d got for such an amazing bargain. Eucomis, Velthemia, Plectranthus went in the shady areas and Pelargoniums in the sun along the fence.

Next I filled in with smaller plants. Under the tree, even shade loving plants tend to grow very slowly, and weeds (just pioneer plants with amazing tenacity and flexibility as to their needs) tend to choke them out. In addition to mulch, I need a shade loving ground cover to minimize having earth that is bare in the shade under the tree between larger plants, and in the big pots around the large philodendron stems. These were taken from the small bed you see here. 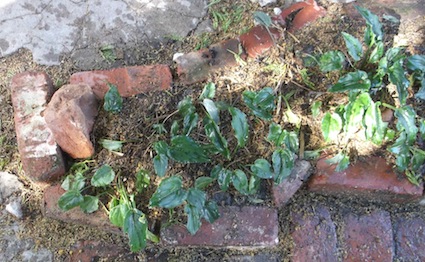 Before planting I put down a layer of vermicompost, and after planting I mulched with dried grass and then sprinkled my dog protection mulch which is not very effective, except that he now treads cautiously in these areas. It consists of sweepings from the garage's iron roof, on which thorn branches had been laid to keep it cool. 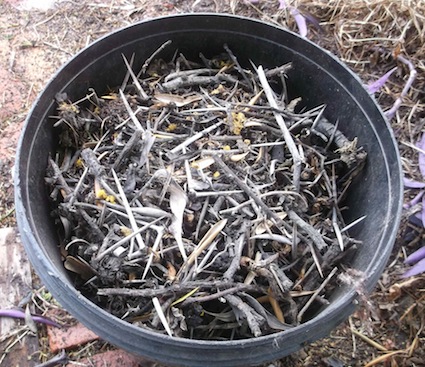 a mulch of thorny sweepings

Finally after an exhausting day’s work the path had been laid, and the bed planted, fertilized, mulched with dry grass and tree sweepings and watered thoroughly. A couple of stepping stones provided access to larger areas.

Below is the shady section after planting. It looks a little messy, but it is the dried grass that looks so messy. I like it because it keeps the earth shaded without coating it too densely, and it is readily available whenever I clear an area. The grass seeds which will sprout again soon in the rainy season, would not be removed by removing the dried plants. The damage has been done, and I’m going to have to weed like crazy for a season. That is fine because I did nothing for eight years while I was studying. 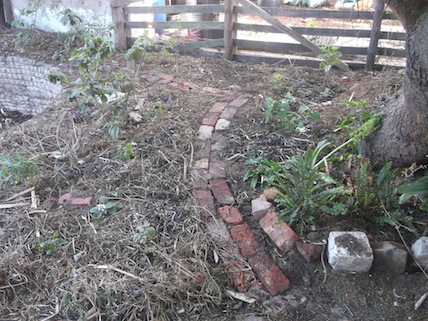 the garden path and the shade loving plants

links to other gardening topics

link to stage 1 of the backyard garden project

link to the previous stage 4 of the backyard garden project