gardens in goodwood
the succulent garden of mrs maritz

I've been admiring this succulent garden in my neighborhood in Goodwood for years. Because I would like to do a whole series on the gardens of the area I live in, and I’ve been wishing to meet the owner for years, I finally had an excuse to knock on the door and find out more about this astonishing collection of succulents. 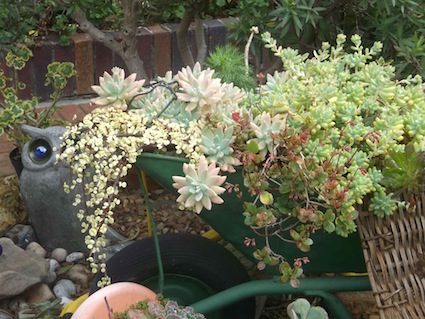 this succulent garden is
eye candy end to end

Mrs Estelle Maritz allowed me into her garden to photograph, and I must sincerely thank her for spending so much time with me. I cannot reflect the variety she has in her garden in an article like this, and I had only a half hour to spare, but I could spend a day photographing the plants in her garden, so many of them are perfect specimens too. 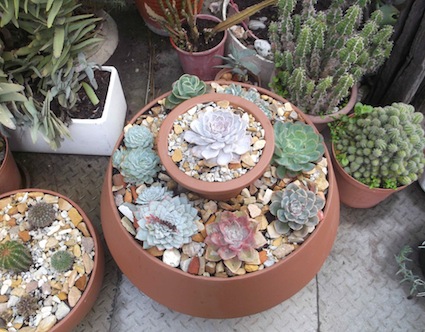 VARIATIONS ON A THEME A harmonious SUCCULENT GARDEN IN CONTAINERS

Mrs Maritz worked a the Goodwood Library for 20 years until she retired, so I was excited about that because we have both tried to get something going at the library. She sells succulents at the library market which is ever so often about once a month, to raise money for the library, but does not sell otherwise. 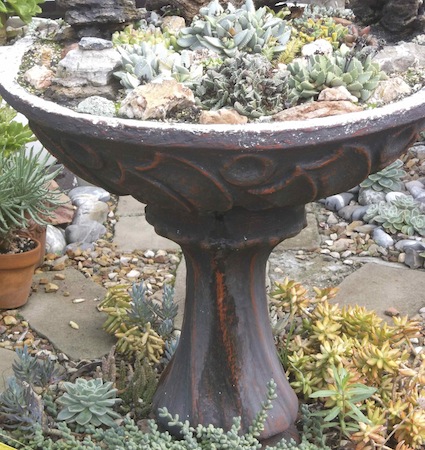 this vase of succulents holds a surprise

drop to your knees and there is a miniature landscape

I asked Estelle for tips on growing succulents because hers look so healthy and flower and thrive and reproduce, and she said, ironically, she just pops them in and sees what happens, no special tips. However with time I did learn quite a bit from this expert cactus grower.

Firstly she told me something I had also begun to learn after assuming these desert plants like no water. You need to achieve the perfect water supply balance.

Succulents are reputed to want very little water, but I also notice they do want a little, no water in our hot dry summers will make them wilt and sicken. But then they also must not get too much. This she said is a greater danger. I too have lost samples of a particular type of aloe to overwatering, or just to wetness of the Cape winter again and again. It shrivels and the core becomes a stinking mass. So watch aloes, for me they are touchy about water.

Estelle buys a coarse sandy planting mix that drains well for potting up. You can buy it at a store like Makro. When you plant or transplant advises Estelle, add a little bone meal. 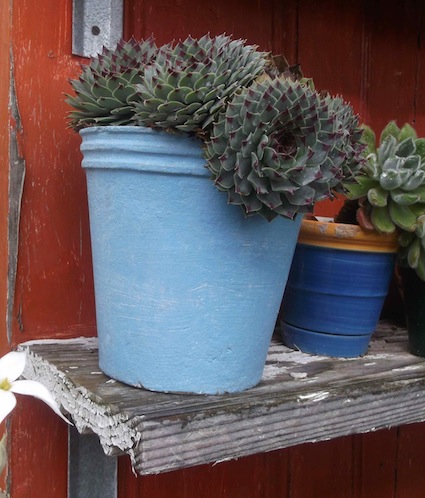 a cactus garden in colorfull pots works every time

Estelle acquired her plants over the years mostly by trading with friends, and one of her great inspirations was a friend Kobus, living close by, who unbelievably, has MORE species and varieties in his collection. She also bought for years from Gideon who has a stand on the street near Stodels nursery in Durbanville, but Gideon is moving to the Milnerton market soon.

The Echeveria multiplies rapidly Estelle says, its no effort to cultivate. Other species have their special needs. The worst pest her plants have are snails, which get the blue treatment. For cochineal which can also be a pest especially in sheltered areas where there isn’t much wind, she uses vinegar or soap. A little Epsom salts is also good for the plants. 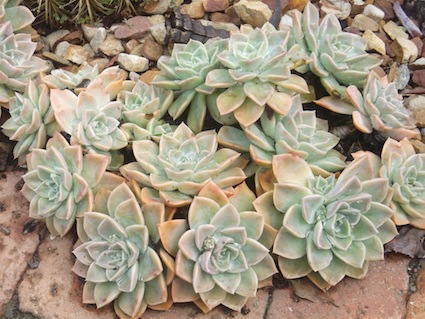 Estelle started collecting succulents in about 2010 when she and a friend were walking and saw Kobus’s garden and got talking to him. For someone who has been doing this for only five years she has a very impressive collection.

I was curious about the gardening competitions in the area, and Estelle explained. The municipality used to run a garden competition in Goodwood, paid for by the ratepayers and a nursery. Now Pam Golding, the Estate Agent has taken over the competition. Estelle has received both a second prize and first prize for her succulent garden in the past, and I can understand how, it’s a fascinating and interesting place and water-wise too, and thank you for letting me in and giving me these wonderful photo opportunities Estelle ! 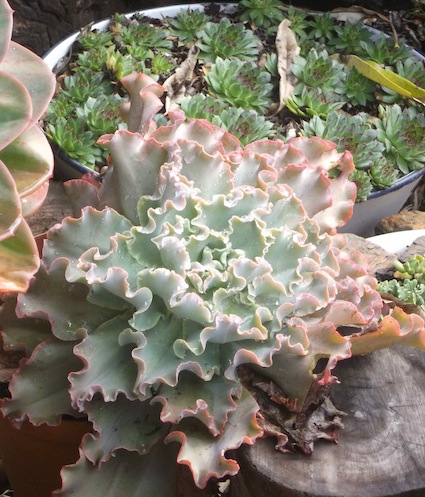 a waterwise gardening project in my back garden