traditional recycle service that fetches scrap at your door 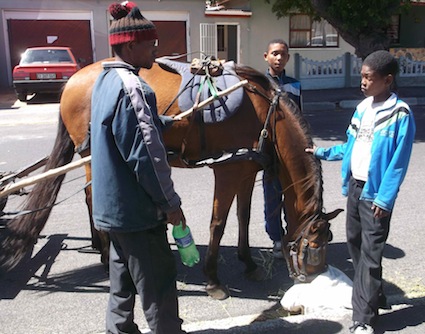 The page on this recycle service is part of my investigation into the South African recycling industry. I want to find out more about the people who work at the coal face, the agents who come on dustbin day with old supermarket trolleys to harvest paper and other items, and the people who pick up scrap metal with horse carts.

There are agents who circulate through our area with a flatbed cart and horse asking for scrap and asked if I might interview them.

The driver was David William Steenkamp (29) of 41 Uitsiglaan, Uitsig, and he was accompanied by two partners Lucien Roberts (12) and Encladio Engel (13), two school students who were earning extra money on the weekend (it was a Sunday).

the horse and the spca and carthorse association 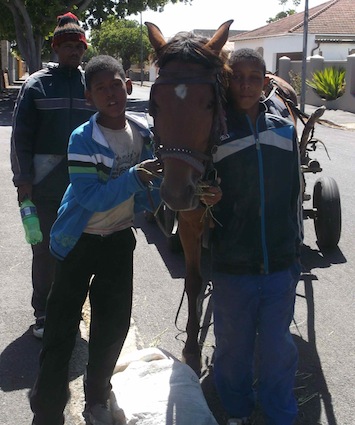 The horse’s feed apparently costs R70 per day, and they need to make money to be able to feed her. Her name is Cindy. She gulped down two five litre buckets of water after waiting while we had coffee and the interview, and was given a bag of hay to keep her busy.

The SPCA polices their treatment of the horse and they may not overload, so they have an associate who picks up really heavy waste in a bakkie (flatbed truck).

David, Lucien and Encladio (David describes them democratically as co-workers) work under the carthorse protection association who makes sure they treat the horses well, but the more I tried to probe, the more I was told how the ‘witmense’ (white people) make sure they treat the horses well, and the blanker a response I got regarding help with business development. He really did not seem to know what I meant and would answer with requests for old clothes.

I began to suspect that this association emphasizes and polices their treatment of the horses, but information on business development to small horse breeders and carthorse drivers so that they can escape poverty is less foregrounded.  I may be over interpreting the reactions I got to my questions and I apologize if this is in fact not the case. It also appears David has a serious problem with hearing, as his co-worker Encladio pointed out. This could be a serious communication drawback, that makes information access difficult.

David and his junior partners get about R 10 to R 40 for sheet metal when they sell their scrap to scrap metal merchants and their recycle service works only with garden waste, iron and old appliances, from which they make the most money by stripping down the wiring for its copper. If there is plastic in the garden waste, they dump it as it has no monetary worth. They are not interested in paper, as the supermarket trolley recyclers are.

David – William has been carting scrap since he was seventeen. His father, who he never met, was also into horses but was not into the recycle service industry, and sold fruit and snoek (barracuda) from his cart. But David says this is too expensive now. He has three horses altogether, but cannot use them all at the moment, though this would increase his income from the recycle service. The horses are kept near the airport, and Cindy can work at the moment, but the others are a foal and a mare in foal, and he is a licensed horse owner and was eager to show me the license. I imagine that he breeds with his horses, but I'm not sure. This is a very old business as a sector. When I was five years old, and a privileged toddler in a frilly dress, fifty years ago, I used to rush out to see the 'horsies' when I heard the clopping of their hooves and the drivers singing out. In those days glass had value, there were even milkmen (remember that) who used to pick up your empties for refilling. Now we buy milk in plastic bags and think we're greener than we used to be.

There is a vast difference between the price you pay for second hand metal sheeting and what these small entrepreneurs get. I think if they could get a bigger cut it would be great for spreading the wealth around. But dealing with the merchants, a lot of whom  profit from the enormous amount of cable theft in this country, leaving us without landlines, would involve the 'big guns'. Metal fraud is partially policed by SA Metal, who have a fraud hotline.

David Steenkamp knows people who let out their carts for weddings but he doesn't do this. I did manage to find out that he doesn’t have a cell phone, because I asked him how I could contact him. He has a new simcard, but the phone fell out of his pocket months ago while riding. Lucien has a phone but no sim card, maybe they combine when calls are needed. I imagine a cell phone would really grease the wheels of his recycle service, and David admitted when he used to have his own phone, he got a lot more business, because people called him to fetch scrap and he didn’t have to ride up and down giving the characteristic whooping calls of the cart drivers, hoping someone would summon him over. So this is a thing at the moment which could obviously help him expand his business. Many businesses in the informal sector here are totally un-contactable, and I think one could develop some project to remedy that. A drop in hub that did online marketing and cell phone calls perhaps, or something to ease up communication, like second hand cell phones to keep very poor entrepreneurs in contact with demand may help a lot. If anyone has ideas please leave a message on the recycling page, thanks so much ! I can contact the carthorse association to see what they want to do and what they really do to help grow these recycling businesses. You may even win the Nobin prize for a brilliant suggestion !

home page for links to other green issues

contribute your recycling tips and stand a chance to win the coveted Nobin prize !