How to create an
insect garden 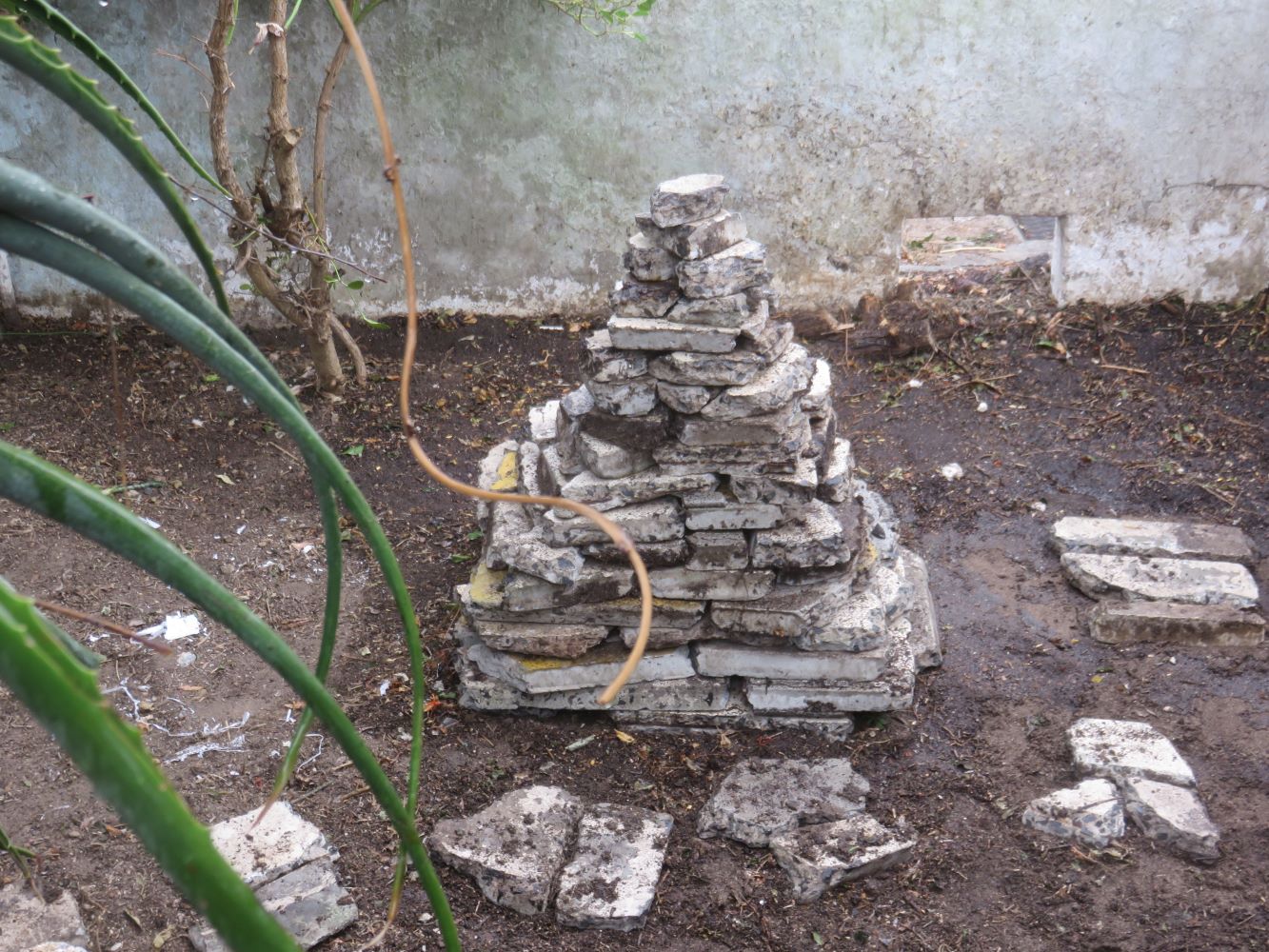 This article is about how to create an insect garden. The methods used apply anywhere in the world, within reason. There are tips on creating insect hotels garnered from watching videos by Markus Gastl, and planting suggestions for locals from a wonderful book by Charles and Julia Botha. 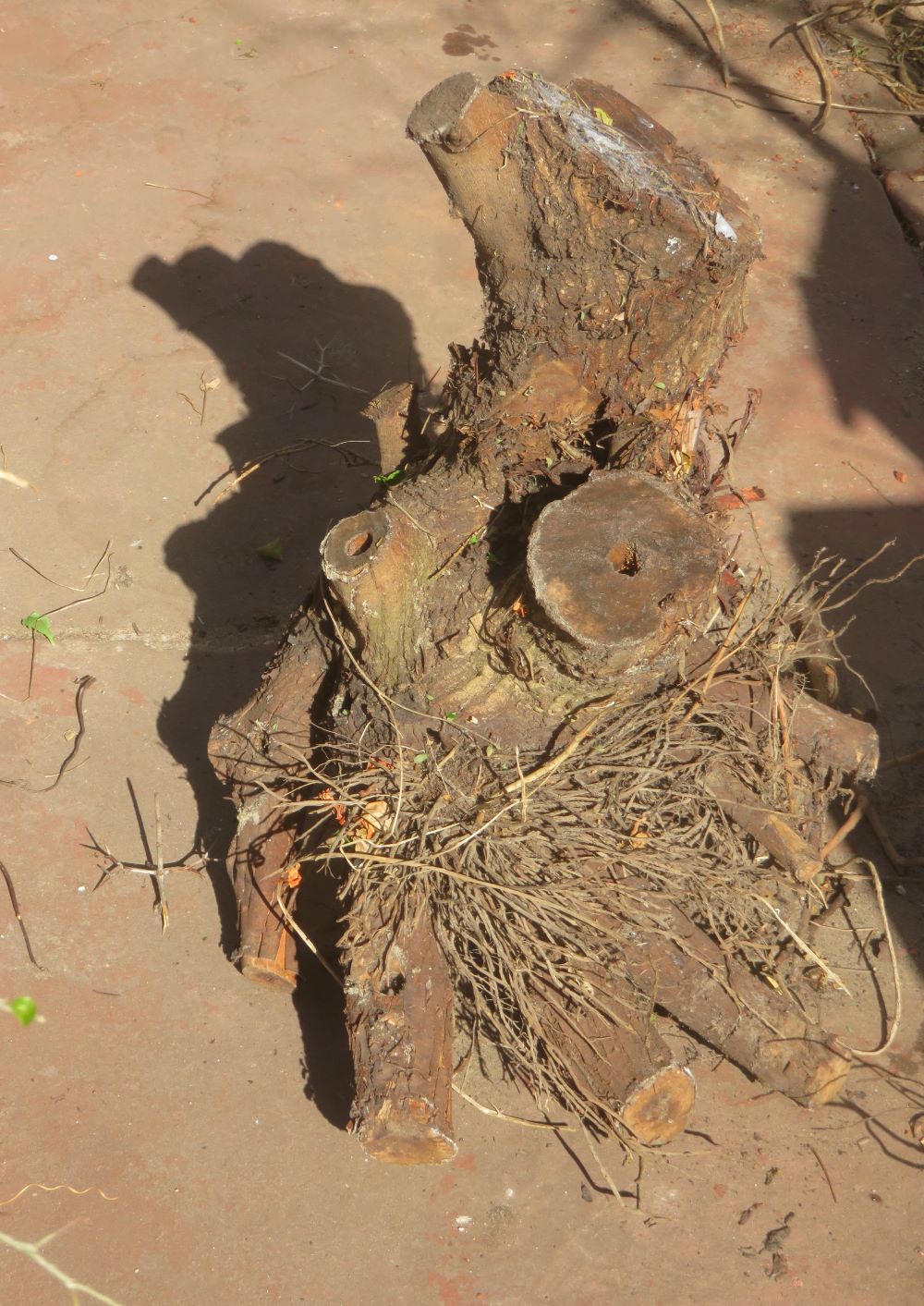 Something for everyone: a hotel for wood lovers.

Markus Gastl is a truly remarkable character. He has a rare kind of muscular dystrophy with a very slow progression, which was discovered while he was still at school. He combated this with extreme athleticism and then switched to gardening. After cycling from Patagonia to Alaska and seeing so much natural beauty and environmental destruction he decided that his mission had to be preserving insect diversity back home in Germany. There he worked as a nurse to terminally ill patients while he built his insect garden. Research showed him that you can't plant for insects using a cookie cutter list from the internet written in another country, let alone another climate zone. Insects need wild flowers, the native flowers of a region to survive. They are not able to adapt to feeding on exotic flowers in many cases. 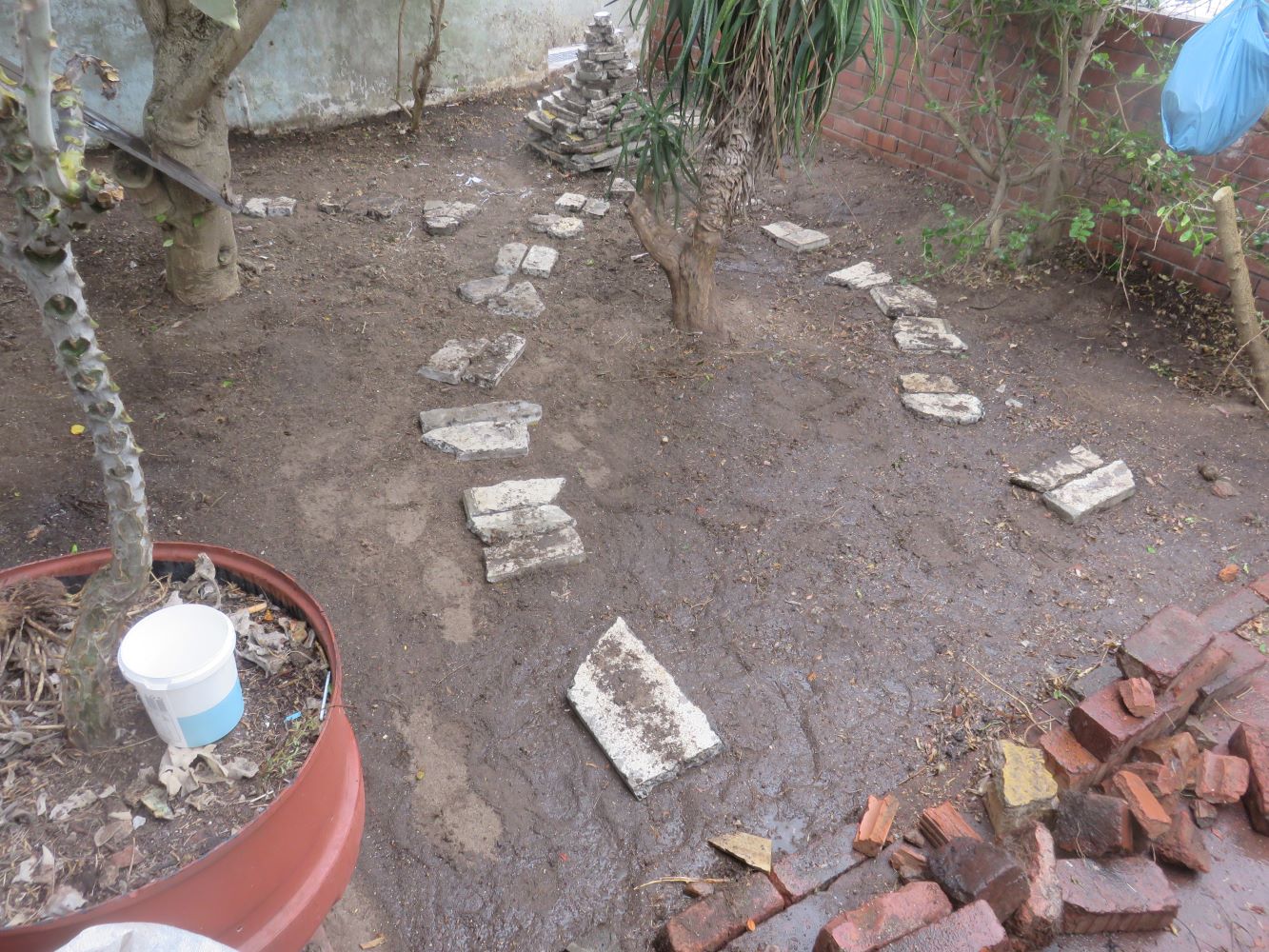 To have the maximum diversity of native flowers he researched on the different species of wild flowers in Germany. He found that the greatest floral diversity was on low nutrient soils, and that rich soils have much lower floral diversity. He bought a smallholding. There he removed a meter of fertile top soil, and brought in builders rubble and stone chips. He created a beautiful wild flower garden, a global network of 'Hortus' gardens that are insect refuges and a new branch of natural gardening, akin to permaculture but opposed to it in respect of its zonation.

Insect gardens and permaculture. Do they conflict ? 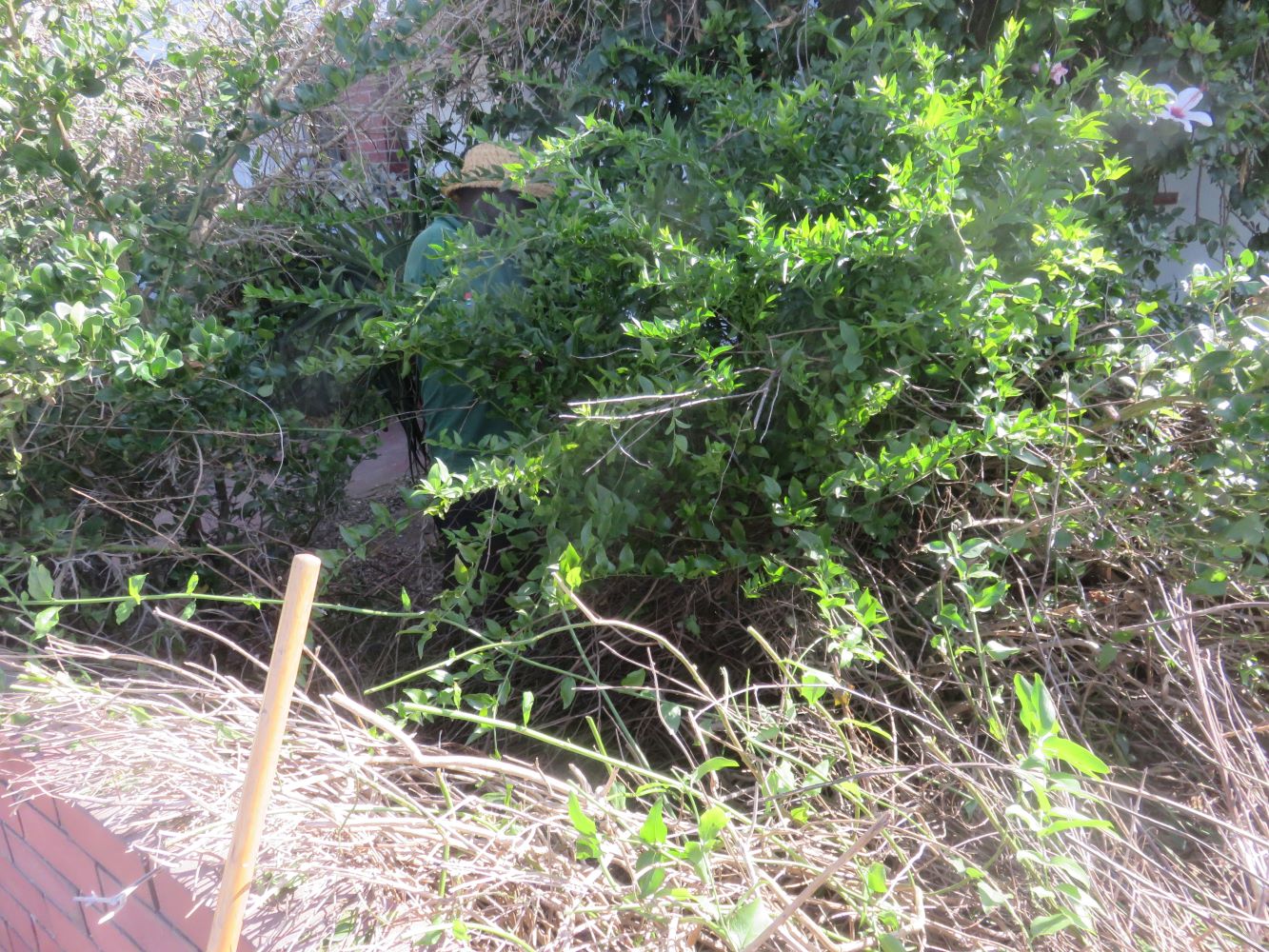 The garden was covered by African jasmine.

Marcus Gastl's garden concept is called the Drei Zonen Garten or three zone garden consisting of perimeter, high and low nutrient zones. The perimeter creates a barrier that protects the insects. In the perimeter are wild plants, hedges, piles of lumber, and trees. This helps prevent windborne poisons from eco-unfriendly neighbours reaching the insect refuge. In the heart of the garden are the 'mager' and 'fett' or thin and fat zones. In other words the low nutrient soils and the high nutrient soils. The principle is to move nutrients away from the low nutrient area, by cutting grasses and annual plants and piling them up in the high nutrient area as mulch. Gastl believes that every ecological garden should have a small area of nutrient poor soil planted with wild flowers for the insects. This is especially relevant if your local soils are known to be nutrient poor, as are the notoriously poor soils of the Cape. Many of our native plants just will not grow in the kind of soil an annual vegetable from Europe likes. So if we enrich all of our soil we are damning many of our insects to extinction, who need native plants to survive. 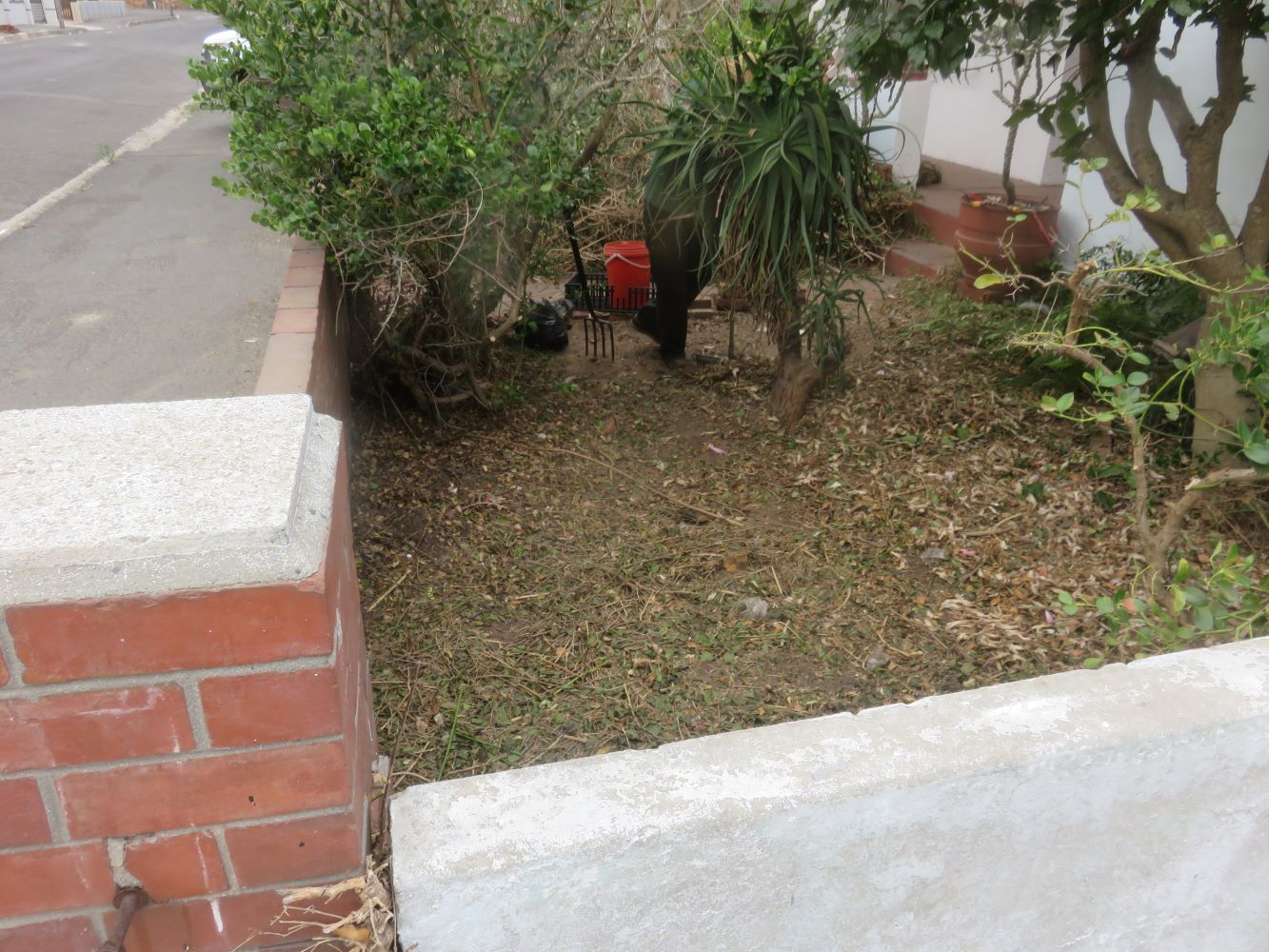 Clearing the jasmine removes nutrients to the compost heap.

This type of low nutrient soil culture needed for a very diverse insect garden seems to fly in the face of permaculture and regenerative agriculture and their soil building ethos, but in fact they meet permaculture and synergize wonderfully. Remember the principle of maintaining diversity. This includes soil diversity, and on the back of soil diversity rides the diversity of flowering plants and insects. 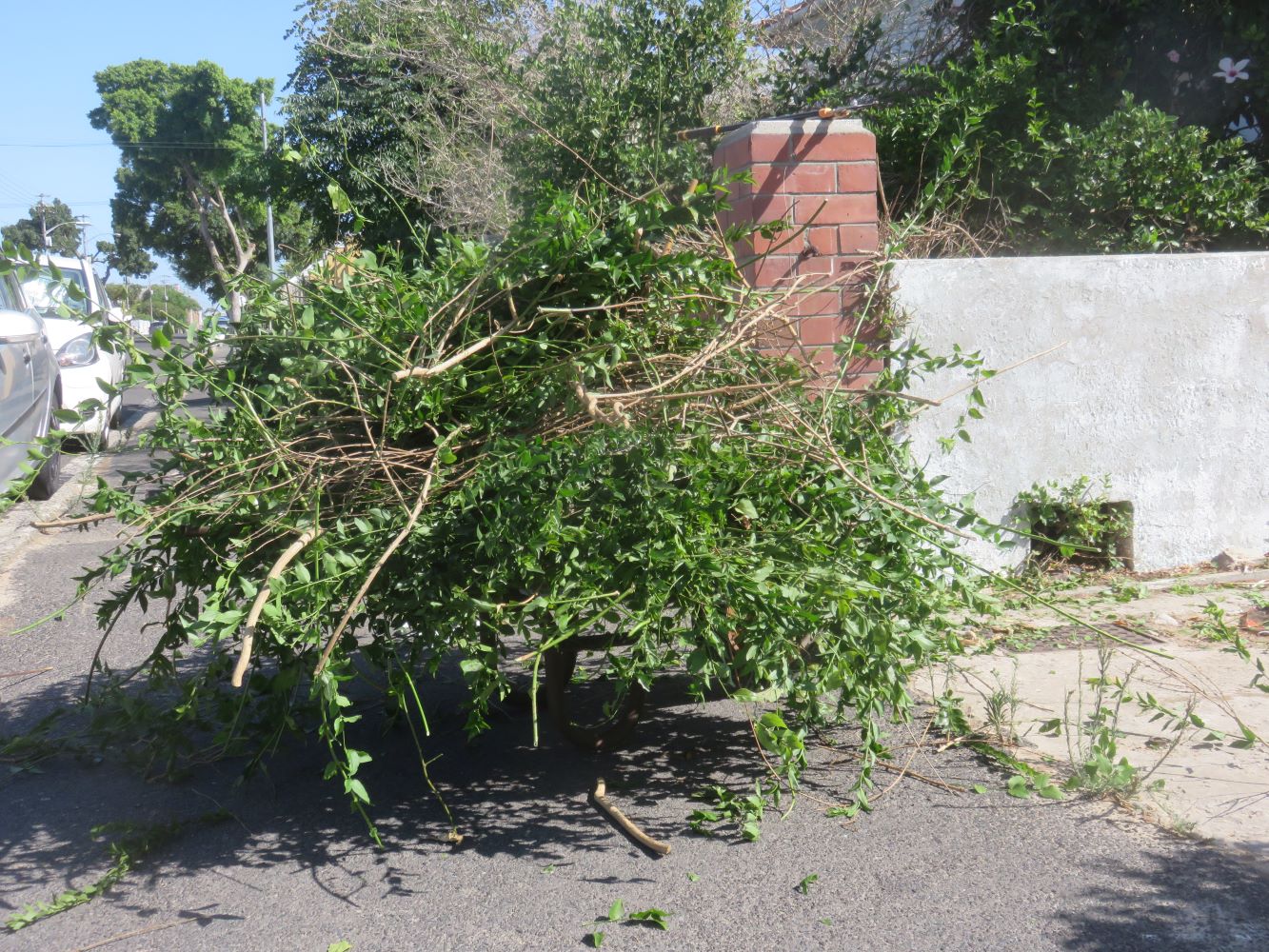 There's a wheelbarrow under all that !

Inspired by the wonderful Markus Gastl I shifted my gardening ethos. I've a small low maintenance garden at the front of my house. It is seldom watered as it is so far from the water sources, and its planted with thorny native fruit trees. Everything that is there must survive on its own. The trouble is its right on the street and there is not protective zone around it, but space in the city is cramped. So I'm turning the front garden into an insect garden. 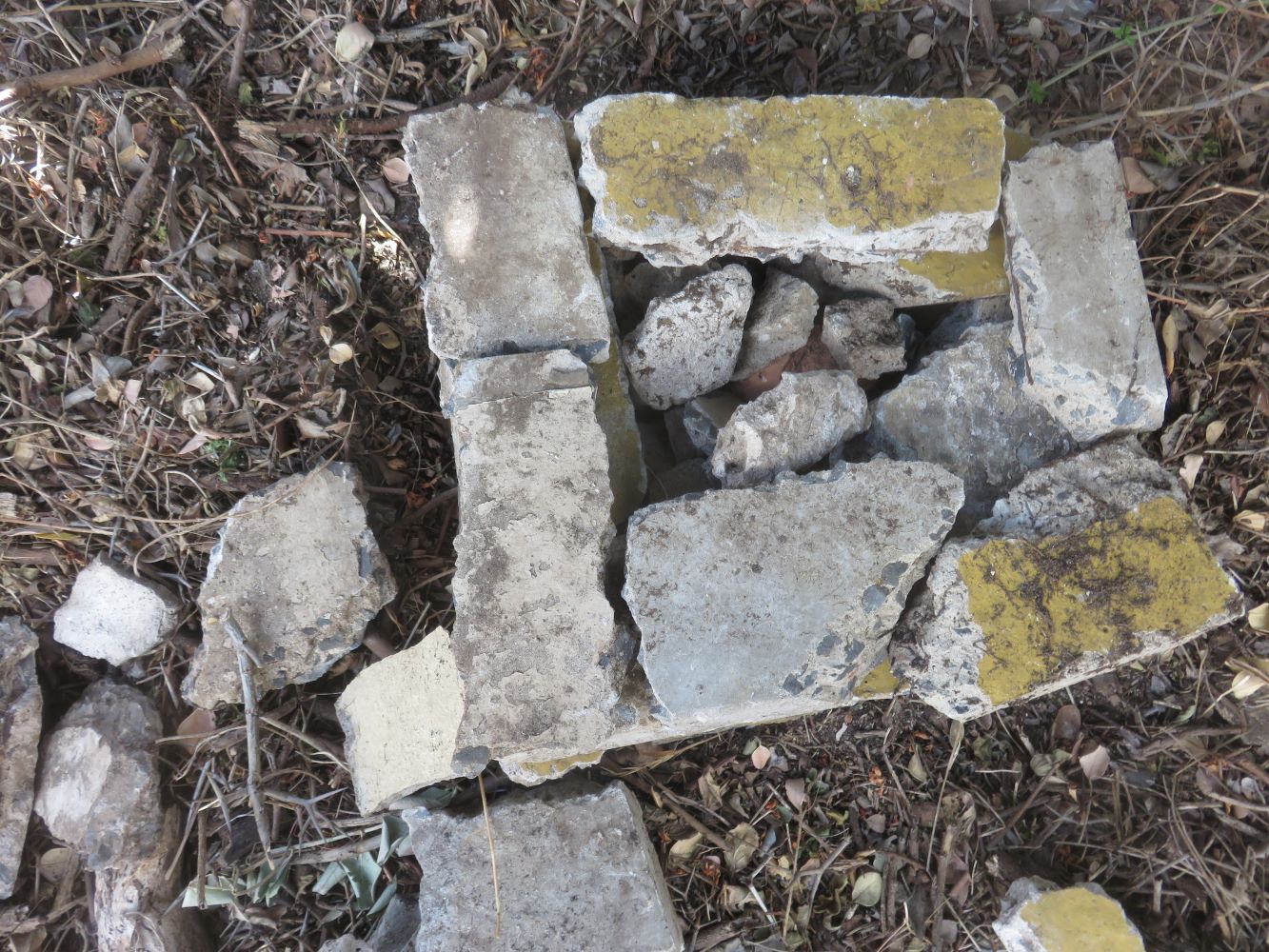 The square hotel walls are filled with loose rubble.

There are four structures in the insect garden specially built to house many kinds of insects, especially solitary bees, which do the lion's share of food plant pollination, when compared to honey bees. For those solitary bees that live in wood, there are the stumps of two exotic trees. I will bore them full of holes of different sizes with an electric drill. The majority of solitary bees make nests in soil. For sheltering those digger bees, there are two stone piles . They are square structures made of piled up broken cement slabs from the local dump. In the bottom of the pyramid is 20 cm of sand held in place by shade net and old carpet underfelt. Over the sand is a hollow space or cave. Carpet underfelt is available free from most carpet installing businesses, but it can be very contaminated with alkaline cleaning agents, so rinse it well first. 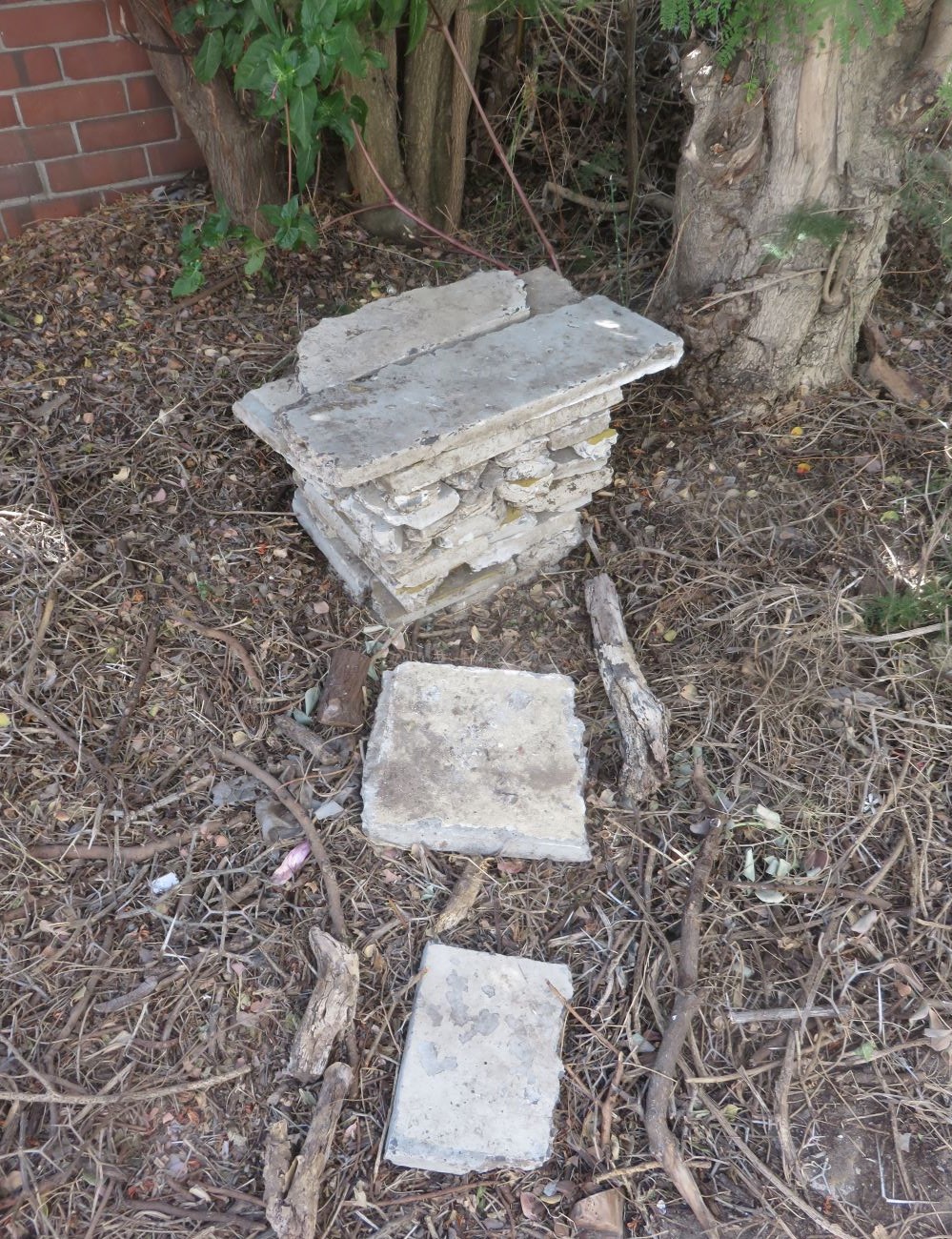 In the insect garden an insect hotel doubling as a bench.

The square flat topped pile is placed right on the natural sand of the garden, and is filled to the top with loose rubble in the hollow space inside, to create all kinds of different spaces for insect and spider shelters. It has a flat top for humans to sit on, because the view from that spot is so green, you would hardly think that an ugly tarred road is an arm's length away. I hope the spiders will not be disturbed by the humans or vice versa. The use of a soft pillow may help with the latter.

Native plants for an
insect garden at the Cape

The other necessity for an insect garden is to encourage a diversity of native flowering plants. There was a massive old African jasmine. It was very invasive, taking up the whole garden and reducing plant diversity. George helped me cut back the African jasmine vine to the roots. He works for me and teaches me how to forage for green vegetables called imifino. Cutting back the jasmine created a lot of space, and removed a lot of biomass. The jasmine is incredibly tough and will probably resprout so that insects can still enjoy its flowers. We took all the cut vines back to my rich soil area, and put them in the humanure composter to make a hot little nest for the humanure 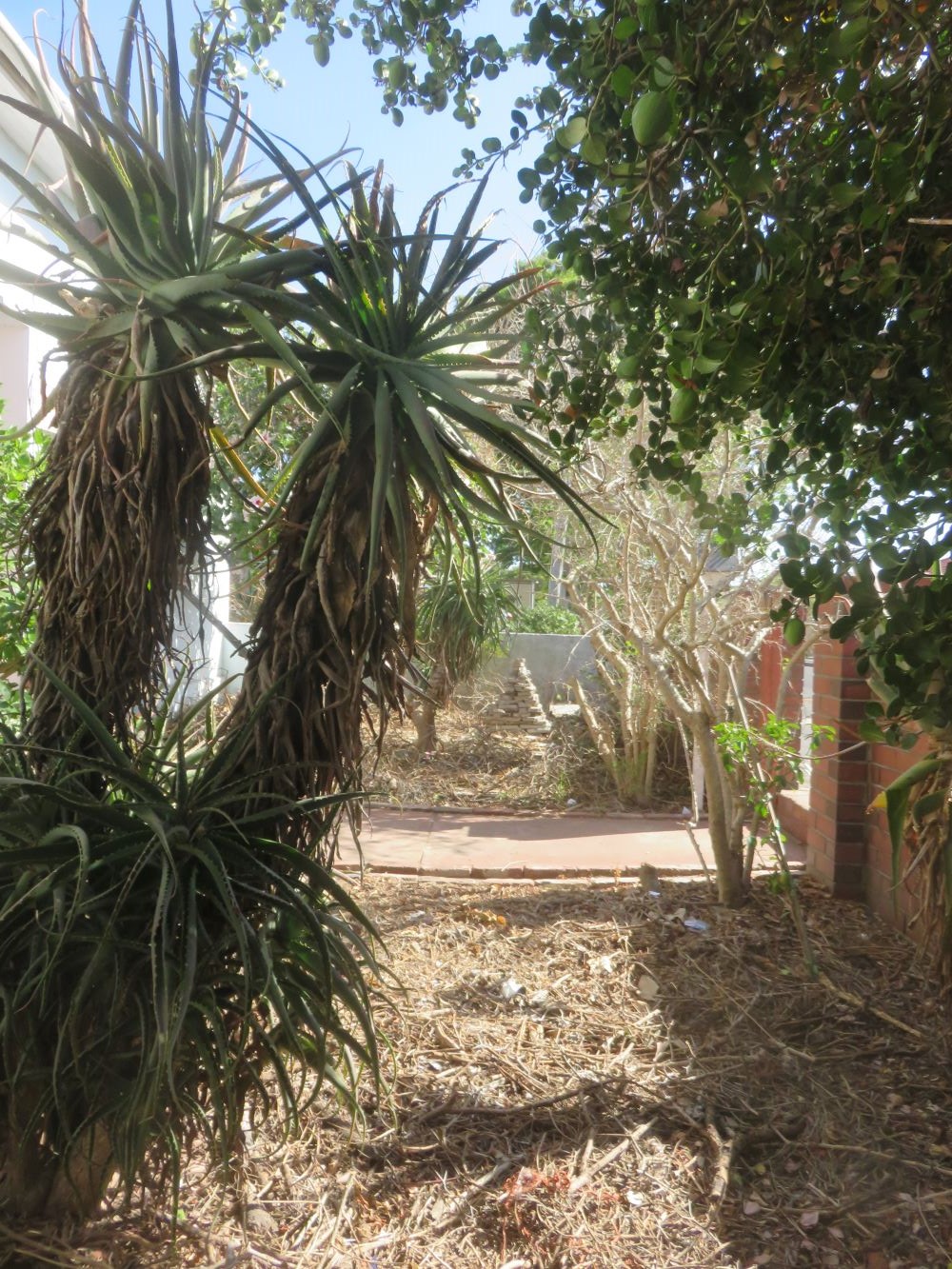 View from the seat down to the insect pyramid

George and I will be building a fence to protect the insect garden from excessive wind, and the plastic refuse it carries. As we will be walking all over the perimeter when we build the fence, I am waiting with planting. In the meantime I've sowed covercrops. We removed the fallen hibiscus flowers and leaves, and sowed some of my forty species mix collected all over Cape Town from weeds, native plants and bird seed. This is designed to be a very effective soil building mix, which contradicts the nutrient lowering ethos, but in the front only the extremely hardy seedlings will survive and hopefully flower, and provide plenty of green leaves to eat, as this is an insect garden, but there are edibles for humans too, like imifino (native amaranth) and Tetragonia decumbens in the mix. I covered the naked soil with a very light covering of dead flowers, only to stop the soil from getting too hot. 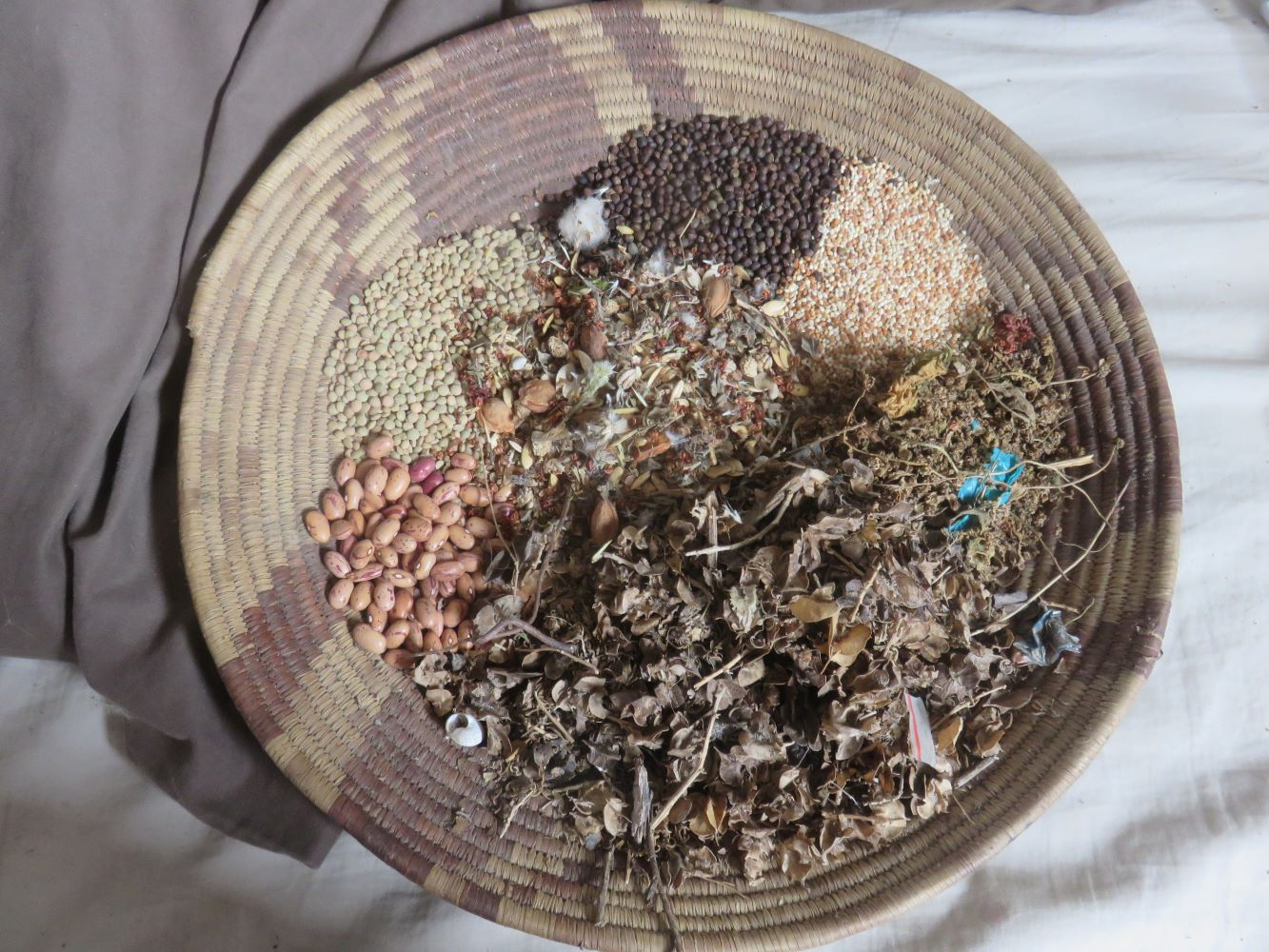 The other plants are waiting to go into the insect garden as soon as the fence is built. There is a beautiful book on gardening in the Cape for biological diversity. I got it at the Goodwood library. It is 'Bring Nature back to your Garden' by Charles and Julia Botha writtten in 2000. There is another volume by the same authors for Kwazulu Natal. Wherever you are in the world, I hope you can find a similar resource tailored to your own local biomes. 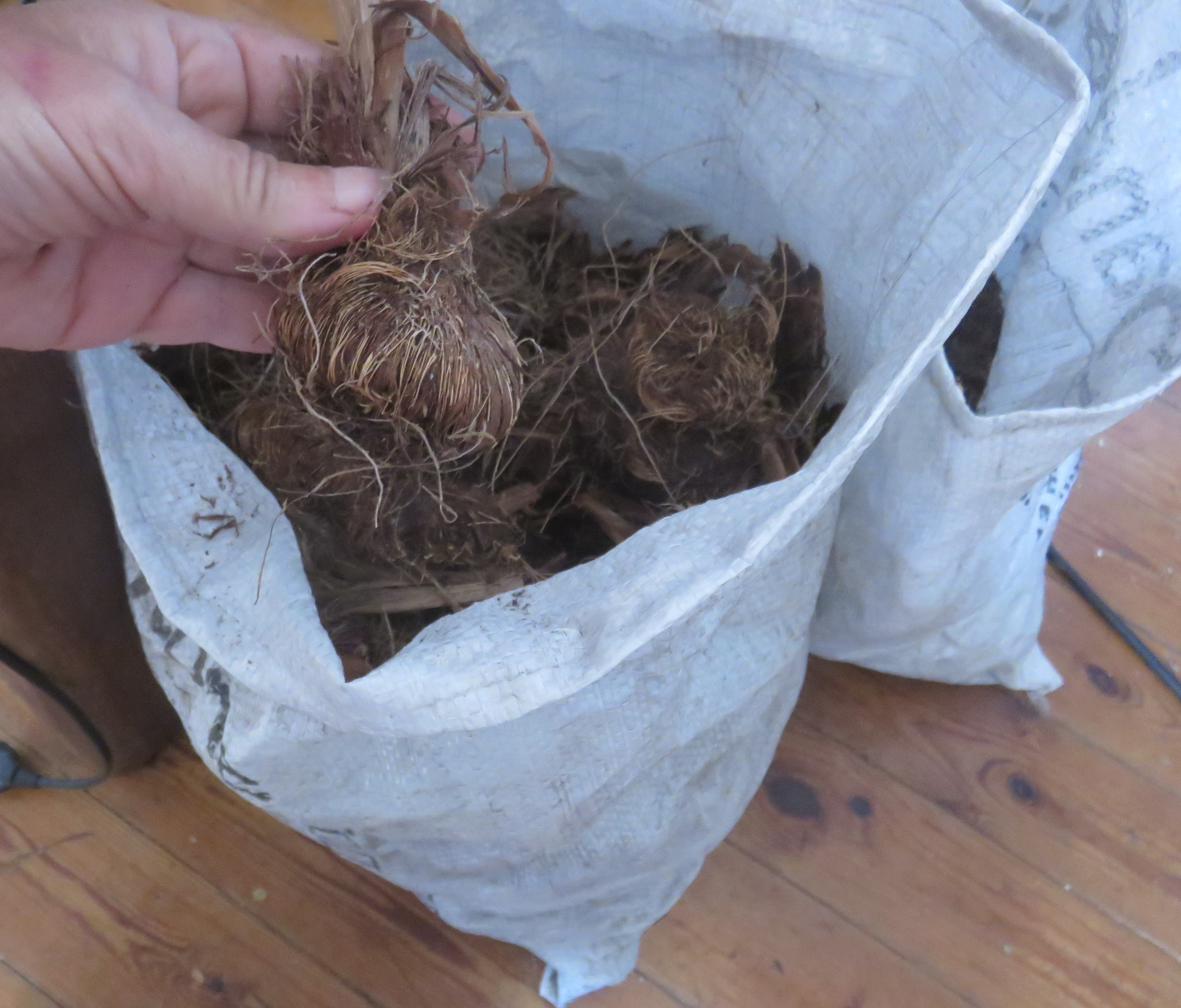 The Botha's book has very long lists of good plants for a local insect garden. They specialize in butterflies, but other insects are mentioned too. To convert a garden full of exotics they recommend not clearcutting, but gradual interplanting, using the sheltering microclimate of the established garden. They recommend digging a hole next to an exotic tree, cutting the roots which enter the hole and planting an indigenous tree in the hole. When the indigenous plant is tall enough you can cut down the exotic tree and cover the stump with creepers or cap it with a bird bath. You can also ring bark the exotics and leave them standing, after removing any dangerous branches. This provides perches and nesting place for birds, who also like to nest in dead trees, as well as a hotel for all kinds of insects who will bore into the wood. Using good forest building principles plant the trees close, rather than well spaced in the orchard style of tree planting where each canopy must be allowed to develop fully in its own space with plenty of sun. Close planting pushes the trees up faster, and it is more natural too. 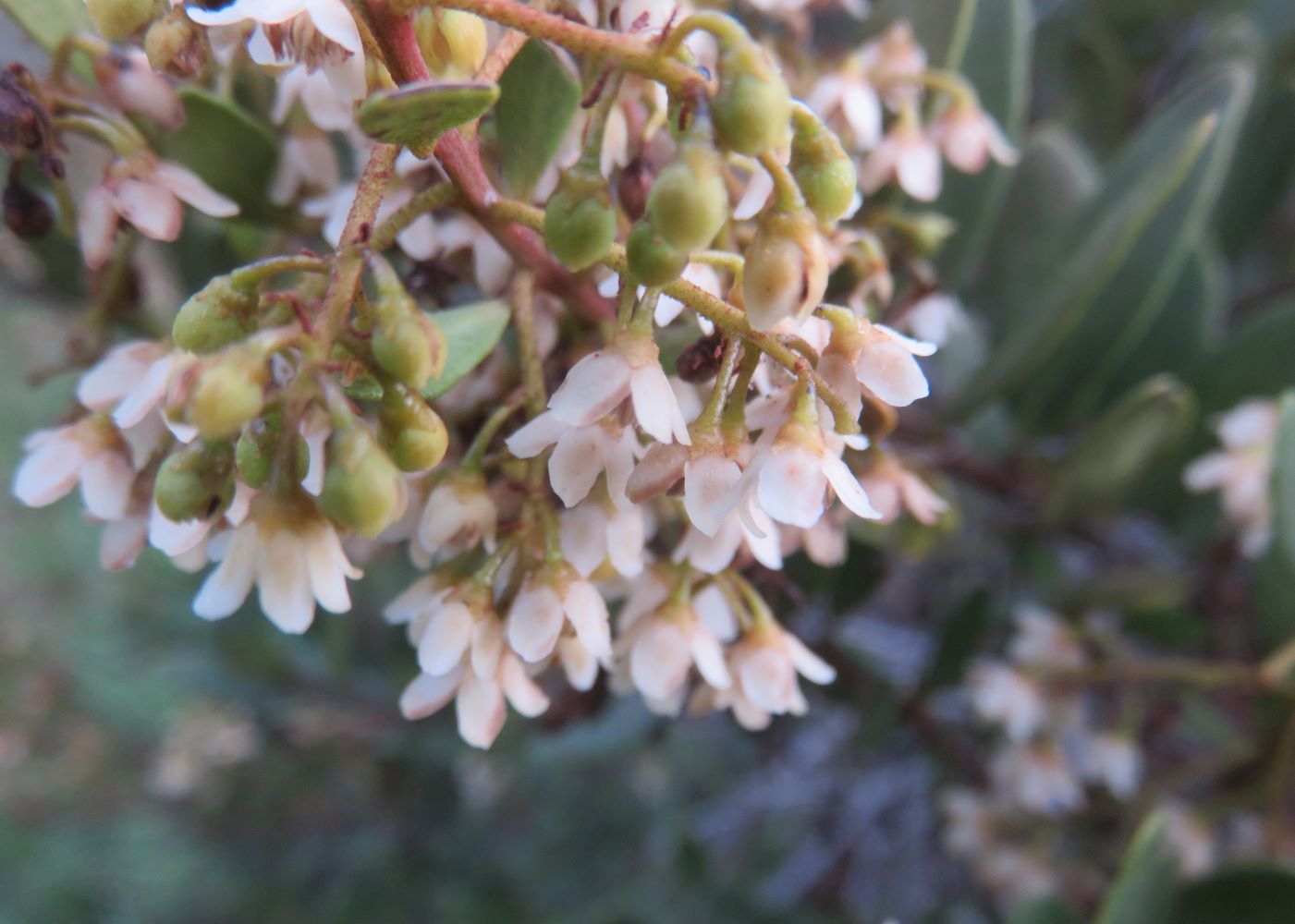 However let me address their plant lists. We start with trees, many of which are local and grow in Newland's forest, the others are better for the karroo: Thorn trees provide food and nesting for birds and are hosts for many butterflies, and fix nitrogen. Acacia karroo, now called Vichellia karroo, is the most ubiquitous. We have one in Goodwood, Cape Town, and it hums with bees when in flower. There are also A. erioloba, A.haematoxylon, A.hebeclada and A.mellifera which are excellent insect hosts. 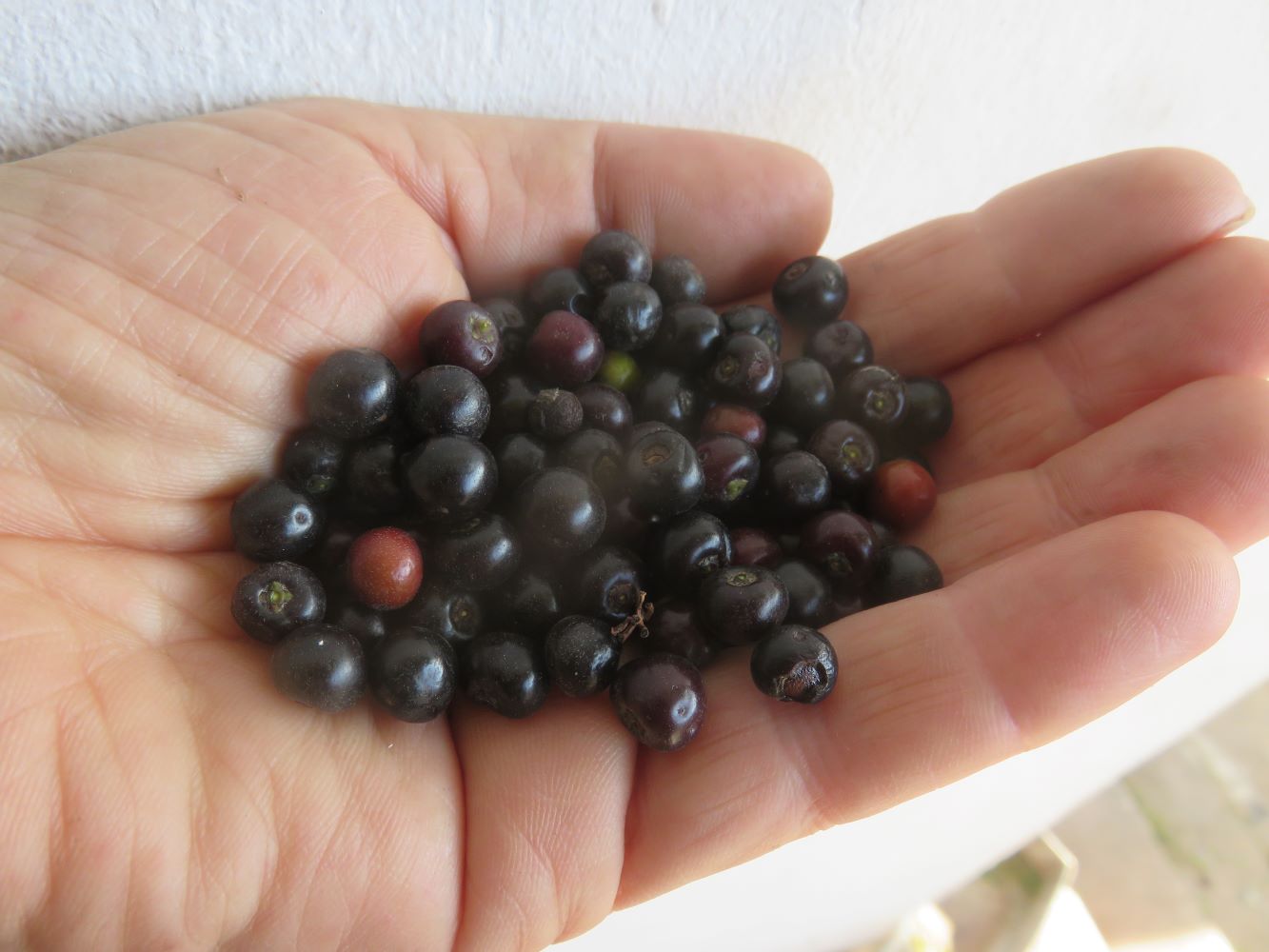 The Gwarrie flowers are enjoyed by insects and the fruit by birds... and humans 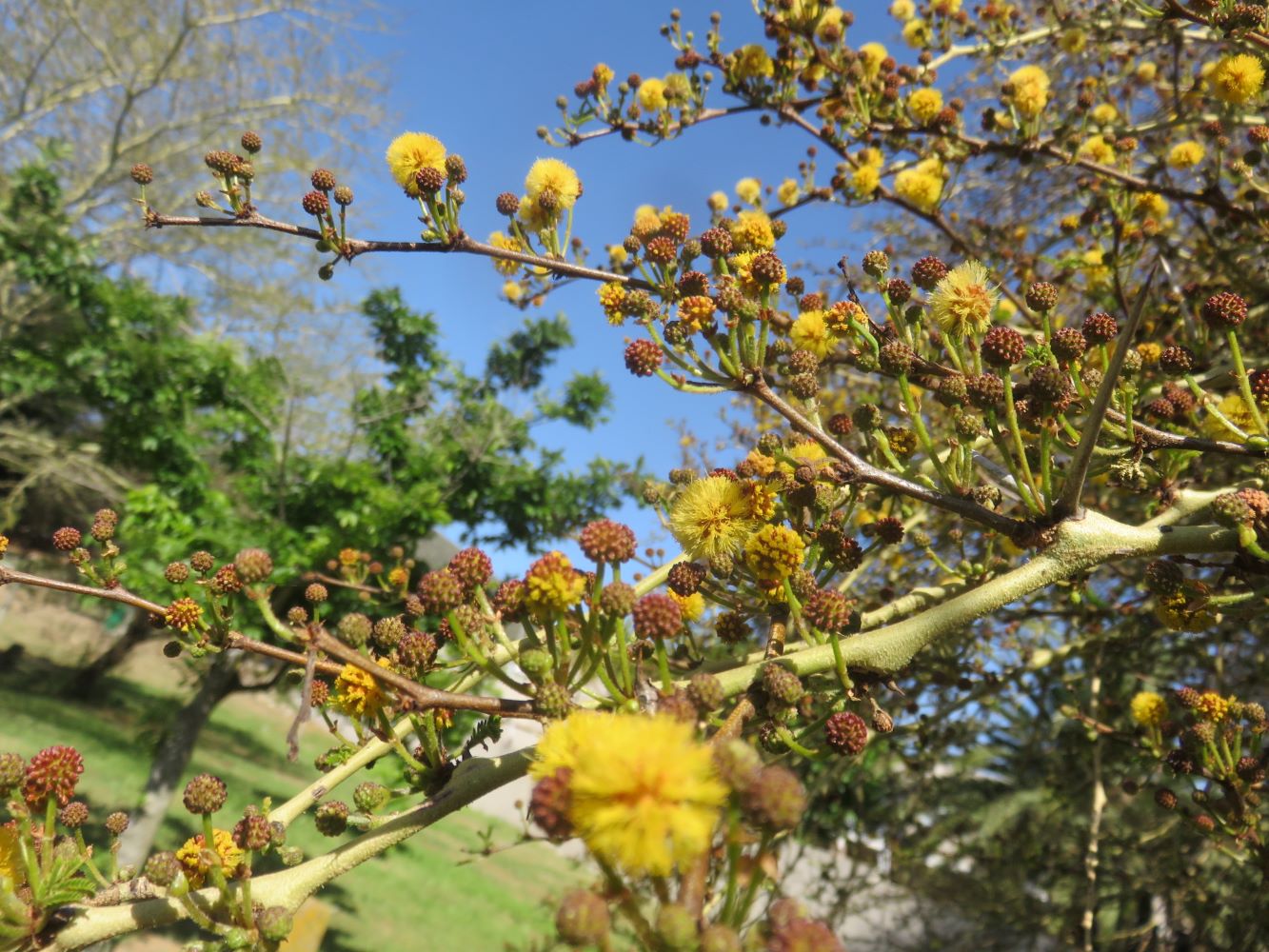 Vines that are insect friendly are Clematis brachyata, Rumex sagittatus, one of the ten South African Jasminum species, Dipogon lignosis, Asparagus africanus, Scutia myrtina, Senecio angulatus and any of the thirty South African solanum species, some of which are climbers.

In the ground covers they mention Arctotheca calendula, Arctotis species, Carpobrotus edulis and deliciosus, Ehrharta erecta grass which is host to ten butterfly species at the Cape and twenty two in the rest of South Africa and Geranium incanum. 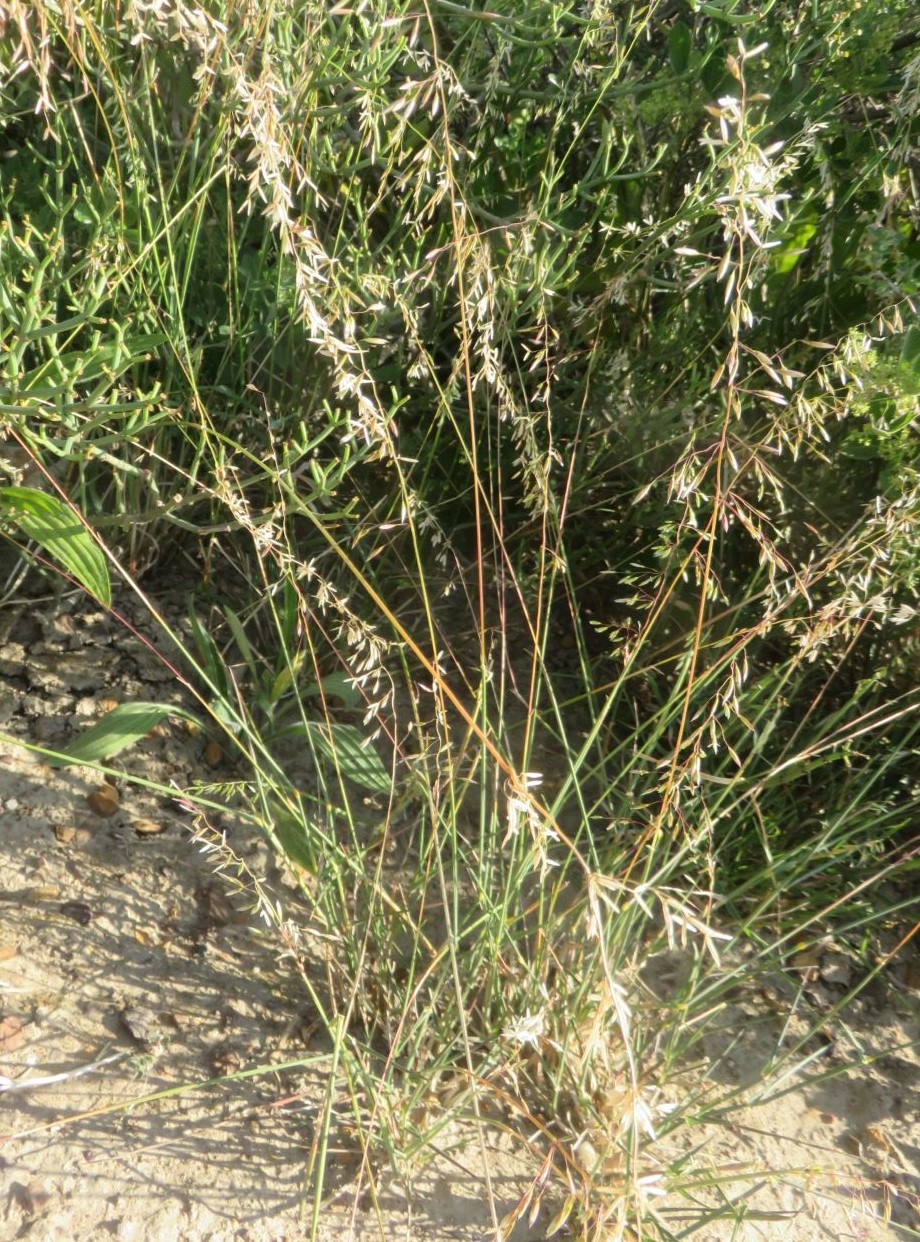 These should be enough plants to start off. I have left out the common names because they will double the length of the article, and I've stuck to Latin binomials to avoid confusion of identities that occurs with common names. Many of these plants are also excellent for birds because the insects attract birds. Those with berries are an added bird attractant. The book contains many other plants on their lists which are specifically for attracting birds, and some which sustain other animals too, like tortoises and monkeys. Some of the plants also have food for humans, such as Euclea racemosa. 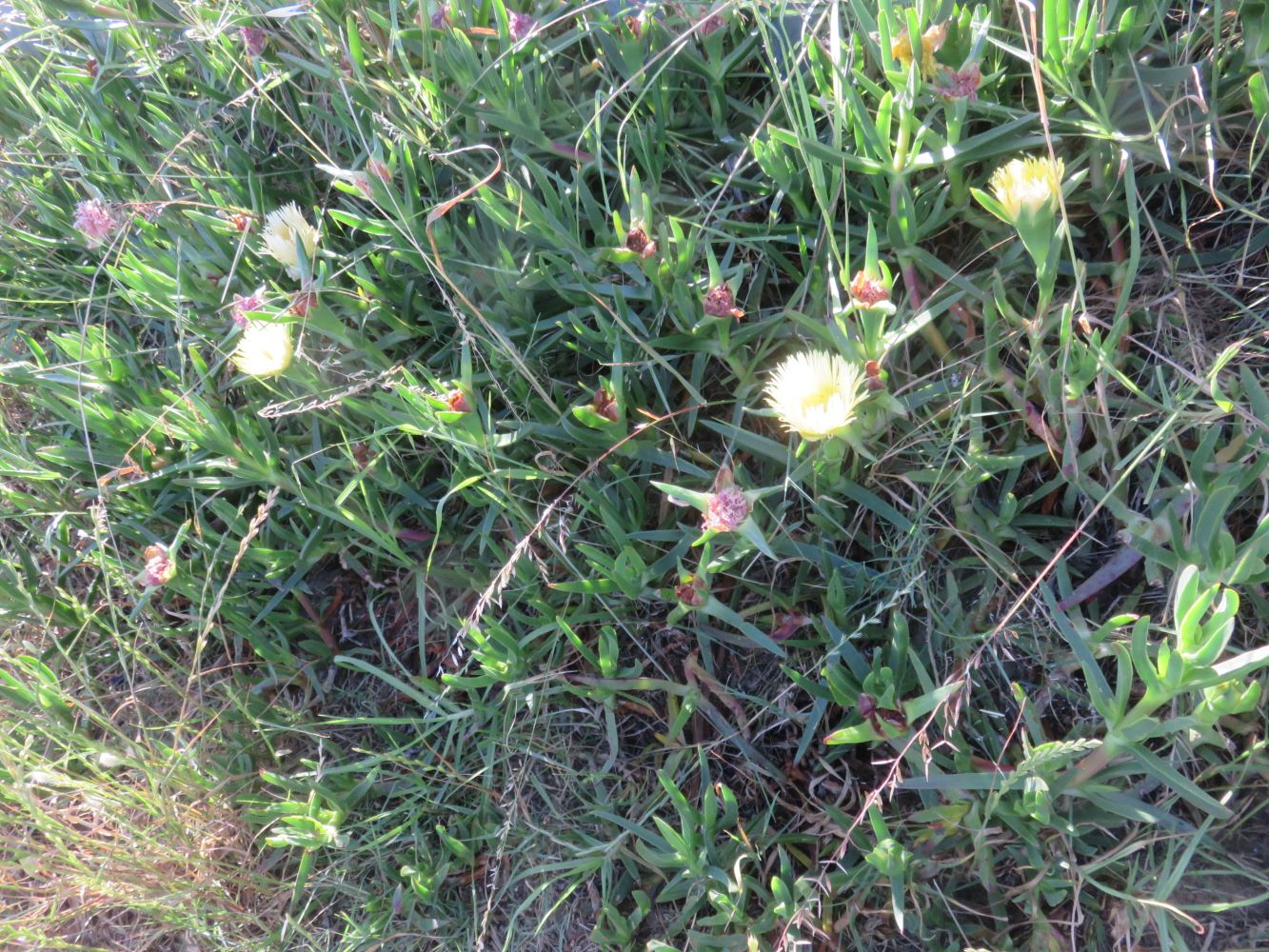 But all of these are for another article on another day. May your garden delight you, and its insect denizens, and may it attract life..

Insects and snails: The visitors to our garden who are usually a blessing, and with whom we learn to coexist or combat gently.

A beautifully written article with good scientific backing from Yale school of the Environment on why we need to plant indigenous flowering plants globally to protect insect diversity.