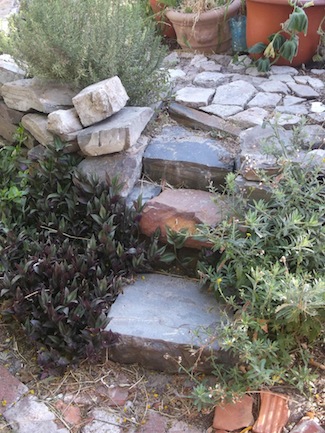 home vegetable garden in your back yard

Growing vegetables in a home vegetable garden is easy. Notably, the conditions  described are for South Africa. This means water conservation is a priority. Above is our raised herb and vegetable bed on a late summer afternoon. The poor pumpkin plant is using one water conserving strategy and wilting like a rag. Tomorrow morning it will look fresh and crisp again.

My two ‘tricks’ …. no make that three or four are: vermicompost, mulching, stood water and microclimate management of the home vegetable garden.

I have grown a number of different veggie gardens, in a snowy part of the world one was in containers on a balcony, and one on an open slope and in Cape Town South Africa, one on a raised bed in deep sandy soil, one in black clay soil, and one in containers with red clay, sand and builder’s rubble.

learner gardeners in the snow zone

my home vegetable garden on a balcony in the snow:

The knowledge of vermi-culture and its benefits to the home vegetable garden only came with my Cape Town gardening experience which was decades later. Up north in the snowy climes, I composted aerobically, on my balcony in a polystyrene lined, insulated chamber I’d built from waste plastic from my workplace. It produced dark rich earth. This and various other additives such as stone and bone meal prolonged the soil life in the containers, but after four years nothing would grow but sorrel, an invasive weed in disturbed areas. My beans were always black with aphids and a sorry sight. I read a lot about composting mixes, and processes, companion plantings, and natural pest control, and I learned how to raise plants when outside temperatures were very low, and took my first successful cuttings from the hedgerows.

My home vegetable garden on the icy slope

My partner and I were allowed to garden the slope behind some lovely brick cottages which had been weavers’ cottages when they still had water-powered weaving mills in Westphalia. We made some terraces from the loose boulders which were everywhere, we sowed, and weeded, nothing grew but the tenacious buttercup like groundcover, with its numerous branchings and runners of enormous tensile strength. I forget its local name. It may have been Potentilla reptans or a relative. There were also some mallow and dandelions. A large clump of chives whose purple flowers were a delight, and had been there for years seemed to keep going…We harvested the dandelion roots and made coffee, which was interesting. Tried the dandelion leaves in salad…so bitter… and sprinkled the chives over our chicken noodles. All in all, it seemed like we’d decisively lost the battle for self sufficiency. But efforts in later decades were a little more successful. It took time.

growing plants from the north in the blistering summer zone

Most vegetable plants in the home vegetable garden are from much wetter regions than South Africa, originally. We have never domesticated the wild vegetables eaten by the Khoekhoe herdsmen, and so growing vegetables in Cape Town is a rather non-green activity, as is the culitvation of many exotic species. Saving water when you grow food plants hence becomes an ideological necessity if you are eco conscious.

When my partner took over the house in Cape Town, he started working for a Koi breeding company, and blue plastic ponds went up everywhere in the garden. Earthworms were an excellent feed for the fish and he started to breed them. A few years later he launched full-time into Vermiculture, and out came most of the trees and indigenous bushes I’d planted a few years before to make way for worm beds for mass production. He succeeded in making a living on a 250 metre square back garden with the worms. He started growing a home vegetable harden on the raised bed I’d constructed with stone blocks and bricks held together with clay. He was helped at first by Johan, his assistant, who was brilliant at it. Then he made a square foot garden, and later I made my own home vegetable garden, about seven kilometres away in the city. Keys to the gardens' success, and our various modus operandi, I’ll discuss below but first a link, to see some pictures

making the seeds come up well

Stephan’s method of germinating vegetable seeds and growing the seedlings: Take a small plant pot. Fill 50/50 with garden sand (the garden is on an old sand dune) and vermicompost. Water well, then scatter seed on the surface and cover with another thin soil layer. When the pot has drained a little, pop it into a clear plastic bag, close the top with an elastic band, and put it on a sunny windowsill. The natural fungicides, and the nutrients in the vermicompost insure that the seeds come up like hairs on a dog’s back and don’t wilt off. When the plants are showing four adult leaves, as opposed to seed leaves, get a lot of other pots ready with the same mix, water them thoroughly. Place them outdoors in the semi shade, and place the pot of germinated seedlings in a bucket of fish water, rain water, or water that has been standing for twenty four hours. All of these have very low levels of the damaging chlorine found in tap water, which is there for public health reasons to kill off pathogen cells, but also kills the cells in tender plant roots. Disentangle the plants gently one by one from the root mat that has formed in the pot of seedlings, poke your finger or a tool into the soil of the new waiting pots and place two or three seedlings in each hole and pinch closed.

That’s it for the first transplanting.

Water daily with chlorine free water as above, and when the plants are sort of twice the height of the pots, get beds ready. You can dig the beds but I believe in zero tillage, most years, especially in pure sand. Just scatter a centimeter of vermicompost on the surface, and fork it in with a trowel here and there. Water, and then a half hour later, dig cup size holes and unpot the seedlings, place them in the holes and squeeze the soil around them shut. I do the holes one at a time, planting as I go and I’m extremely hasty and careless about it, only making sure the roots are well covered and the soil patted down.

If the soil round your newly planted seedlings slopes so that water runs off, a small dam of soil around the plant will help. In our very sandy soil I sometimes place bricks around the seedlings, they both dam up the water and their increased pressure on the sand increases its osmotic pressure, I believe, holding water for longer, and also protecting the soil, like a mulch does, from the blistering sun.

I water only the next day, as the soil has already been watered, and I believe its kinder to the tender root hairs that are in shock to not stress them further with rushing water or subsiding sand. It seems to work. After that I water first every day, then after a week every second and then every third day. The plants put down deeper roots if you starve them of water a little. If you do not, the fine roots will remain close to the surface, which could dry out suddenly in hot weather, and at the very least making them vulnerable and more dependent on your attention.

mulch... a must do... ABout everything

After planting out the seedlings in a home vegetable garden I always cover the whole bed with a light mulch.  This can be sweepings from under our Acacia karoo tree, or wilted weeds, or rotted dried straw, or leaves, or semi rotted compost that is still quite coarse and full of un-rotted fibers and texture. Mulch stops the soil from getting hot, drying out too quickly, suppresses weed growth, and....rots slowly and improves the soil quality in so doing.

In very wet climates, gardeners, I've heard, do not favor mulch as it harbors mold. The naked earth policy may thus be quite efficient there but in this region it is an unnecessary and counter productive way of gardening, and it is wasteful of water. Mulching is a survival issue. A mulched bed needs much less watering. I also find mulching extremely attractive and textural, giving the beds beauty and visual interest until the plants take over. Mulch is also rumored to harbor pests. I actually found these minimal once the home vegetable garden was established.

There are some plants so loved by snails in the home vegetable garden, that they can be entirely demolished in one night, just after being planted out. As plants grow their structure seems to get tougher and less palatable to snails, but not always. I’ve tried snail bait (very Eco unfriendly) and beer traps and pine needles piled high around the red basil which they love. One could put plastic collars cut from plastic soda bottles around them for a week or two, with copper tape or wire around them. In the end, I surrendered my plant choices to the snail rule, but the most effective battle strategy is to go out in the early dewy morning, or after rain, and collect them in a jar or bucket. What you do with them is your choice. I’ve taken them to a nearby sports field, and slyly flung  them into the long grass along its rim, I've fed them to the Koi fish, who suck them out of their shells, and I've frozen them, as I was told it was painless, inducing torpor and then snail coma before death, but I just have not found a solution I'm really comfortable with.

My home vegetable garden in the city, Caroline's square foot garden, was located on what had been compacted waterlogged soil, a dead patch of lawn outside the block of flats. So I dug it up to about 30 cm, filled the bottom with dry newspaper and vegetable waste, replaced the soil, watered it with diluted urine for a week, then let it stand for a month before covering in 1 centimeter of vermi-compost and planting and mulching. The problems in this garden were snails and a ruthless raging wind. The soil was extremely fertile. The seedlings were planted closer together than usual, so that they could form a micro climate, protecting each other from wind and desiccation. A reed fence broke the wind in the beginning, which you can see in the pictures on the link above. Below are links back to the garden page,  and to the home page for further links on recycling, green building and many other green topics in the domestic setting.

home page for useful information on gardening and green living

management and ideas for shady gardens