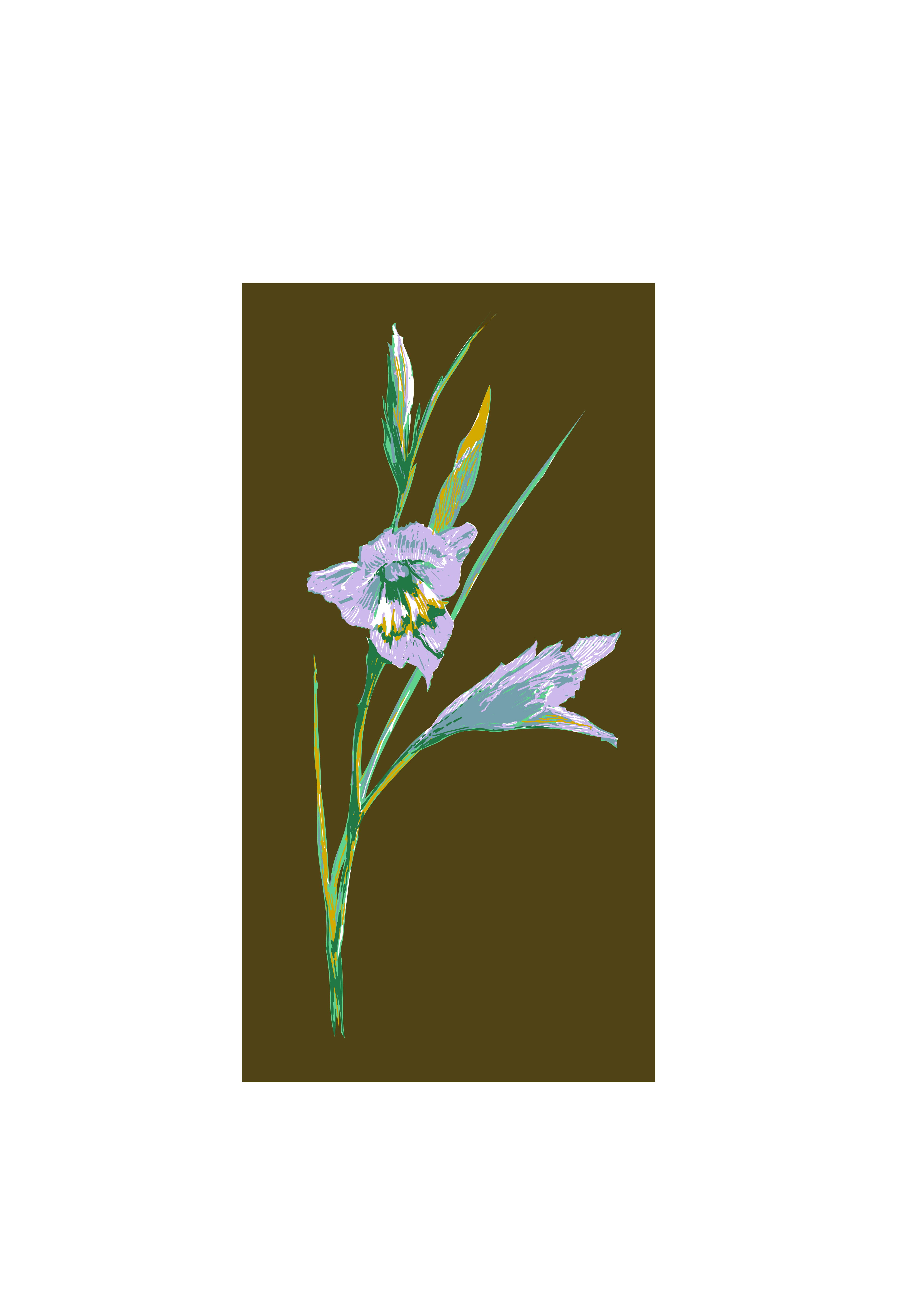 The Gladiolus in art, language and iconography.

This design is based on our screen print design of a wild blue gladiolus native to South Africa. Making wild flower designs with our native flowers is the way I promote knowledge of the flowers and thus their conservation. You can purchase this design here, printed on clothing, accessories and decor items.

Gladiolus flowers whose original genetic stock came from South Africa, are known to most gardeners around the world. They are sometimes also named sword lily echoing the botanical name Gladiolus. The word gladiolus is a diminutive of gladius, meaning a sword in Latin, the same root giving rise to 'gladiator' the one who uses a sword.

Down at the tip of Africa, they also use diminutives for the gladiolus, but the plant reminded people of other things, like smoking and the 18th Century long stemmed clay smoking pipe, or even a turkey ! Hence some native gladiolus are called 'pypies' or little pipes and some are called 'kalkoentjies' or little turkeys, while others are very generically called 'Afrikanders' or African flowers.

The blou kalkoentjie, or little blue turkey flower, in the design is a pale lilac gladiolus from the Western Cape, South Africa. It is also known as Blou Afrikaner, Blou-aandblom or blue evening flower, or mauve Afrikander. Blou Kalkoentjie seems to be a special regional name found in Darling. To further confuse matters, Wikipedia claims it is called the blou pypie in Darling, which name is more commonly associated with G. gracilis. I could not find a record of the Khoesan name, and there surely must have been one, with legends attached, as there are with many of our other plants like Buchu and Nymphaea capensis. The deep blue native water lily is the spirit of a drowned maiden in the indigenous story. In many interpretations worldwide the colour blue is the colour of sadness.

Gladiolus carinatus, or is it gracilis, as they look similar, is used for the logo of a local dairy, olive brand and wine. It was designed by the wife of the farmer who started the dairy. Well done ! I didn't know this till recently.

Gladiolus species are found on all old world continents. In European iconography it signifies remembrance. Privately, for the people I've known, and for the stories of the loss of our phenomenal lowland vegetation, I daresay all our fragile bulb flowers signify remembrance to me.

The exquisite fragile beauty and the perfume of the blou kalkoentjie is famed in the rural areas of the Cape where it occurs or used to occur. There is also a wild variety that is yellow.


As to the genus Gladiolus in general, there were approximately 300 recorded species in 2017, globally. 10 are originally from Eurasia, According to Wikipedia, 260 species of Gladiolus are endemic to southern Africa, and 76 are found in tropical Africa. There must be overlap because that makes 346. All agree the centre of diversity is the Cape Floristic Region.

The botanists working on the genus were an American, Peter Goldblatt who was born in South Africa, and a South African, who is based at the National Botanical Garden, Kirstenbosch, in Cape Town, John Manning. The type specimen is at Kew in England.

The blou kalkoentjie's persistence on earth was once as fragile as the flower. But the survival of many of the beautiful flowers of the area is helped by local farming families who are mostly very conservation conscious. A local farmer Tinie Versveld had set aside a reserve for preserving the local flowers, and the Duckitt family who own a commercial orchid nursery, also have nature reserves. The attention of botanists from the National Botanical Institute and botanical enthusiasts in Darling helped appreciation of the flowers grow. Those who organize the show today are botanical activists with deep roots in the area who care very much about the conservation of their precious local botany.

According to the South African National Botanical Institute (SANBI) threatened species program, G. carinatus was automatically assigned as of least concern, and it does not have red data status. But my mother has been going to the area for almost 90 years, and remembers them having much wider distribution on farms in the old days. G. carinatus' status is currently under revision, which will hopefully confirm its safety for the future.

Many of the Cape's plants were first recorded by the botanist Carl Thunberg, who Greta, the famous climate activist, claims as an ancestor. His first collecting trip took him to Mamre, a mission station near Darling, in early September 1772, and he would probably have seen G. carinatus in the region. Certainly the other blue gladiolus, Gladiolus gracilis, was recorded by Thunberg and Sparrman, another Swedish botanist well known in South African botanical history, who was on the trip with him.

The Royal Horticultural Society information online says that G. carinatus is widespread on the coastal flats of the Western Cape, needs good drainage, and is a neat and attractive species 20-50 cm tall. They describe the flower as blue or grey with a contrasting yellow band on the lower tepal. The local gladiolus species have symmetrical corms with fibrous brown tunics and bisexual flowers with a tubular perianth.

Another British horticulturist says that it is, in contrast to the hybrids which flower in summer, a winter growing species. Its native habitat is seasonal wetland (and those have nearly all been drained) and dry grass plains, and they emerge with falling temperatures around 10 C at night and 24 C day. This region is a winter-rainfall summer-drought region, with a dry Mediterranean climate and no frost. They thus require extremely dry dormant periods in summer or the bulbs rot. They are ideal for a frost free, sunny greenhouse. They should be planted in well drained compost, and watered only once, upon planting, thereafter to be watered and fed regularly only after the leaves emerge. I would suggest making worm tea for food. If you want to find out how you can visit this award winning website.

Gladiolus flowers have been bred in horticulture for centuries, and today large Grandiflora hybrids are available based on the wild tetraploid Gladiolus dalenii. The original South African flowers are generally smaller and more elegant in form than the hybrids says a British Gladiolus collector and I would agree. Once you have seen the wild thing, the hybrids lose their charm, but I'm open to surprises.

The plant is collected by North Americans, and one of the best sources of growing information online for our bulbs is the Pacific Bulb Society.

They describe the flower as blue to violet or yellow, rarely pink, often with yellow markings on the lower tepals, adding that it is found on sandstone slopes or deep coastal sands in many areas of the Cape, flowering in late winter to spring. My mother supports this, stating that it has a very long flowering season, which is why some still appeared at the Darling Wild Flower Show in September, which is mid spring locally. It has been grown successfully by collectors in the USA.

Locals who are interested in growing are a small clique of passionate people, and are often members of IBSA, the Indigenous bulb society of South Africa. There I also met Rod and Rachel Saunders, the founders of Silverhill seeds, which many of the PBS enthusiasts use. They were doing amazing work and their loss is tragic.

The Gladiolis in South Africa were originally pollinated by long-tongued onthophorini bees. These bees, like most solitary bees, make nests in the flat soil and clay banks and are thus called digger bees. They are large, robust, and hairy, making a high pitched whine as they hover. You can build a refuge for digger bees by building a sandarium, or a special bee sandpit (google Markus Gastl Insektorum / Sandarium). Most pollination is actually performed by solitary bees, not by the honey bee. The local hairy bees who pollinated G. carinatus may have disappeared through loss of habitat, like many of the other solitary bees of this region. The symbiotic relationship with Gladiolus species has fortunately adapted to include pollination by sunbirds, with their sharp curved beaks, large nocutid moths and hawk moths, and long tongued flies. You can read about long tonged fly pollination in an article by Goldblatt and Manning here.

Gladioli are host plants for some moths like the Large Yellow Underwing.

home page for lots of articles on natural gardening

our flora and fauna printed textiles

Our Gladiolus design on clothing, accessories and decor items