organic weed control
using weeds to the full in  permaculture 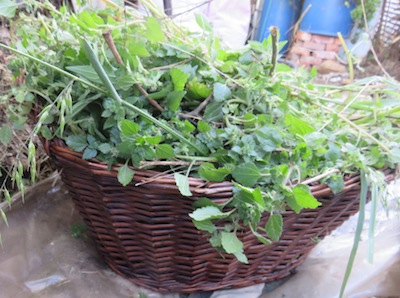 I enjoy organic weed control permaculture style. In permaculture weeding isn't even called weeding. Its known as chop 'n drop, referring to the cutting rather than pulling action and then just dropping them where you cut them. On a larger scale, chop 'n drop is a way of managing support plants in food forests in the early stages before the climax vegetation is reached.

In the vegetable garden it supplies a friendly way of seeing the 'weeds'. Nonetheless, my garden was sorely in need of some clearance of uninvited green guests which were throttling the vegetable patch.

I’ve been away some time and it became impossible to see what could be harvested, what should be cleared and where new food plants could be planted. I decided to work along the paths so that they were more easily negotiable, before tackling the raised bed where most of our vegetables are planted. 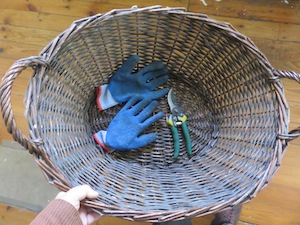 How to do chop 'n drop,
or organic weed control in permaculture

I took my tools, a large wicker basket which is even lighter than a plastic tub, some secateurs and my gloves. The gloves were needed because the garden is full of stinging nettles. They are an indicator of fertile soil, and we had worm beds covering most of the garden when my husband was a full time worm farmer, so the fertility is a residue of that time two years ago. Our soil is light white calcareous sand, as our house, even the whole suburb, is built on an old sand-dune that is several meters thick, like much of the Cape Flats which used to be under water a few thousand years ago. All in all, the natural soil is extremely infertile. 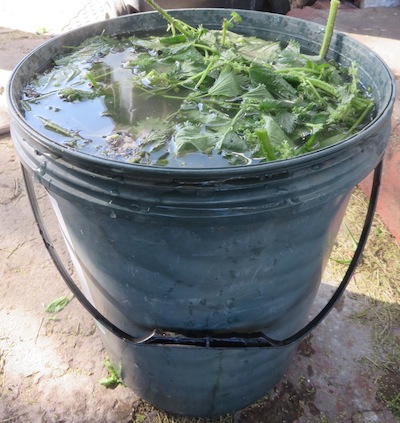 nettle beer for feeding the soil and plants

I wanted to weed in the chop 'n drop fashion of permaculture because it is sensitive to garden ecology. The rationale is that pulling up weeds disturbs the soil and creates fertile ground for more weeds, promotes erosion, and exposes disturbed naked soil to the blistering South African sun, leading to water loss. In contrast, in chop 'n drop, chopping the weeds off as short as possible leaves the soil undisturbed and the soil holding root mats intact. The roots start to die back because you have cut the plant, and the decaying root hairs feed the soil and promote soil life.

I drop the weeds where I’ve cut them, believing that the nutrients they have removed from the soil will be returned exactly where they’ve been removed. Weeds are often nutrient accumulators too, and will 'fix' deficiencies in the soil by pulling up minerals from deep down. The mulch of cut weeds should thus keep the nutrient balance in the soil good, and hydrated, and along with the dense root mats in the soil, suppress the germination of new weeds.

I did remove the stubby soft grass tussocks between the bricks in the paths with roots and all as they were more trouble to cut, and I collected quite a lot of cut nettles to make a new batch of liquid green manure, and kept some weeds aside to add to the compost pile to supply it with nutritional diversity. Green weeds are even more nutritious than manures, which have already been 'extracted' by the animal's gut. 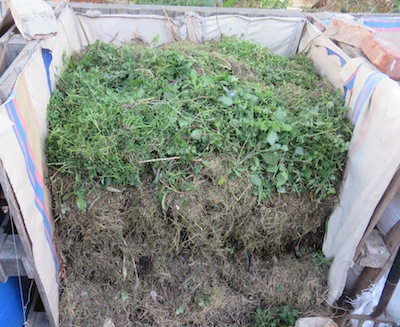 the icing on the layer cake for soil bacteria

a gentle method of weed control

As I went I got into the swing of cutting and it as as quick as pulling up weeds.

The result was a visually gentle low impact clearing of the overgrowth, leaving no stripped areas of naked soil. It was also satisfying to know that this was a very eco sensitive way of clearing weeds, and a job well done. I was able to see clearly enough to do some harveting, clear out radishes that had gone to seed, and cabbages that had shot up, give the remaining vegetables light and air and I could work out where to plant again.

I harvested some beetroot, chinese cabbage, and a few very hard old radishes and ascertained that my carrots are doing well. Earlier in the season I took lots of tender young nettles to make a Scottish nettle soup recipe for bulk freezing, but now the nettles are fibrous and making prolific seed. I dunked them in a bucket of water and set them to brew.

The brew is already foaming after three days. It’s a life elixir for tired soil and for the compost heap. But weeds don't just feed the soil, they add zip to human food too. I've harvested nettles and Oxalis pes caprae (Suurings) to add to salads and sambals with apple and green chillies. These recipes are on my husbands cooking website. 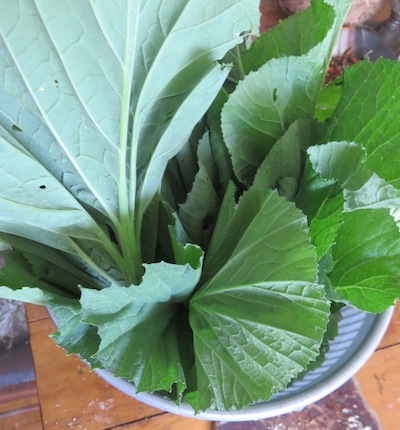 growing vegetables in the natural garden, with a list of easy to grow food plants