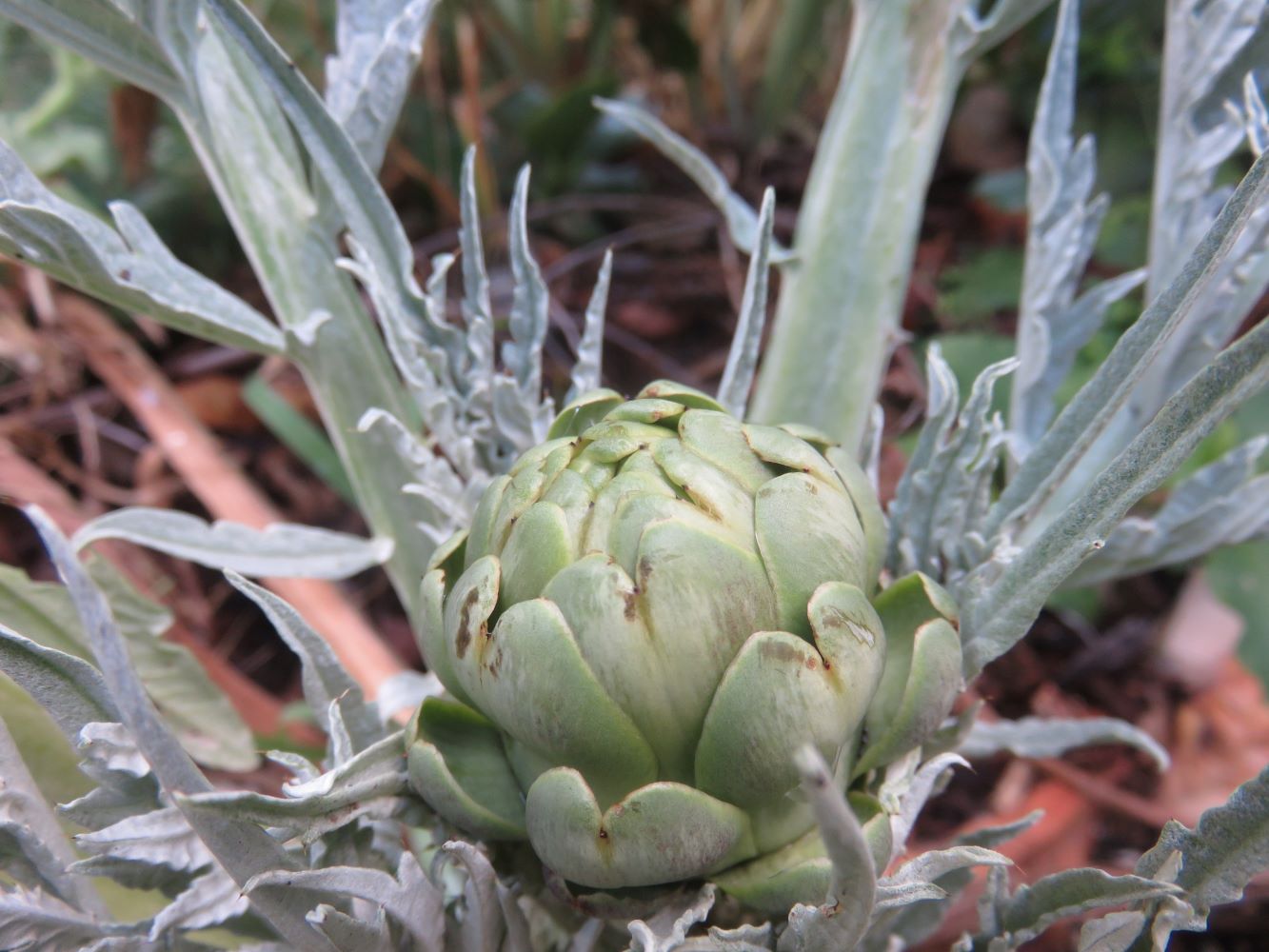 Globe artichoke leaves are beautiful when healthy. Self seeded plants in the clay garden.

Some challenges when growing globe artichokes at the Cape

Growing globe artichokes in our climate and soils at the Cape seems easy at first, but requires more attention to get a harvest. We have a Mediterranean climate, but our summers are hotter and drier than the true Mediterranean, except perhaps for areas in Spain and North Africa. On top of that we have poor sandy soil on the Cape Flats because this area used to be under the sea and the wind blown dune sand is very leached. We also have some very old mother rock, and that has had a lot of time to lose its minerals. 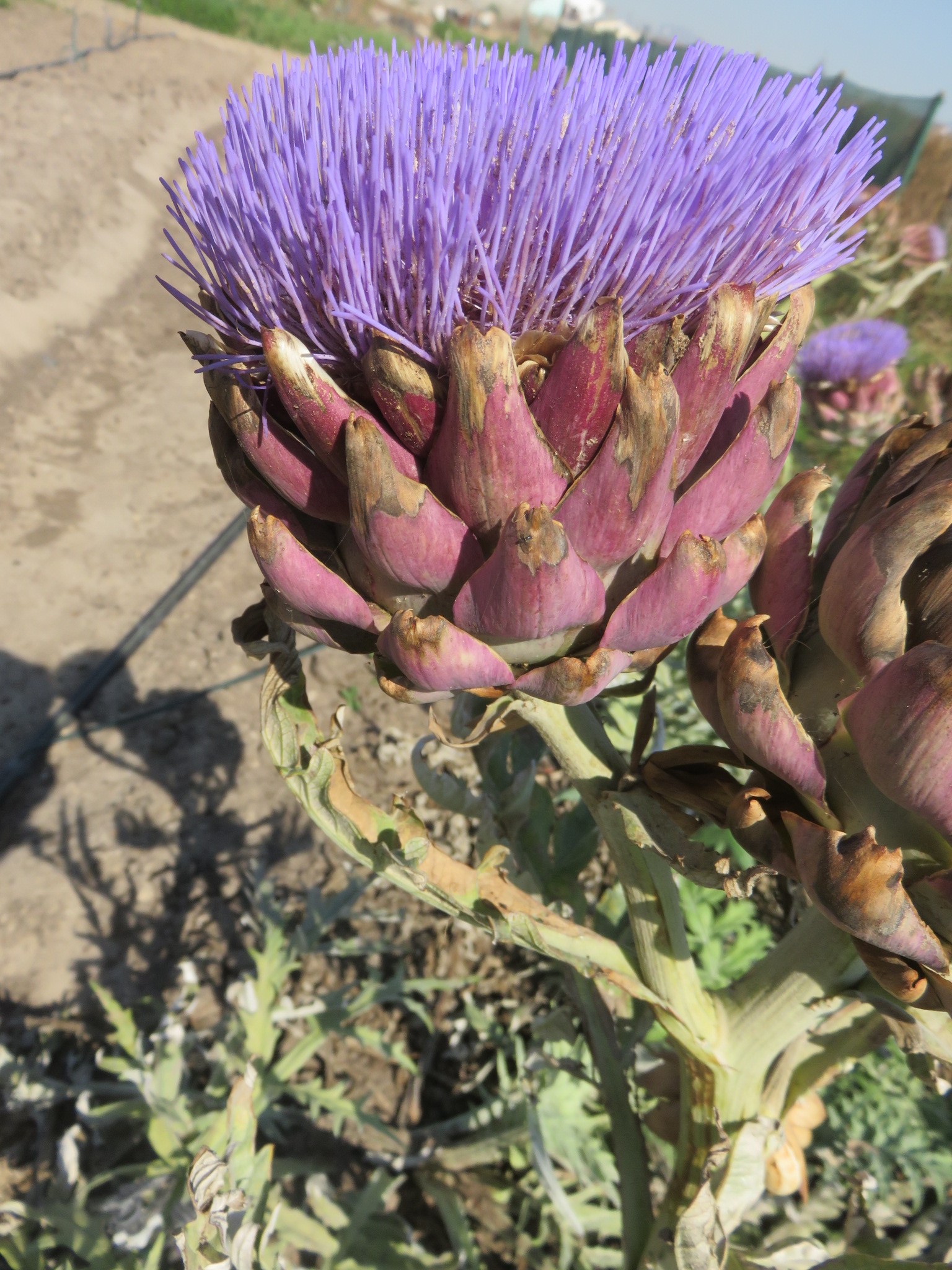 An artichoke growing in deep sand at Khayalitsha. In full flower it can no longer be eaten, but will form nice fresh seed. Its similarity to a thistle can be seen easily.

The globe artichoke Cynara carduncus var. scolymus is a vegetable whose large fist sized flower buds are eaten. It is very closely related to the cardoon or Cynara cardunculus var. altilis whose leaf stalks are the main vegetable. Both are in the family Asteraceae, and are a type of thistle, which are generally very hardy pioneers which do not have demanding soil requirements. I found from growing globe artichokes that they showed a healthy bounce back capability.

I've seen successful gardeners growing globe artichokes in windblown sandy gardens in the summer heat, on rock hard packed clay, planted in Camps Bay, close to the beach and planted by someone who really knew what she was doing, and in lovely permaculture vegetable gardens in Constantia, kept by experts, with well cared for and humus rich soil. In my garden they died back and came again. But there is one caveat on all this toughness to keep in mind when growing globe artichokes. They only produce their luscious flower heads in certain conditions. They have not done so in my garden yet. They withered away and died in a lovely sunny spot in my garden, grew better under the guava tree, and looked very good in their pots around the wetland. I'm trying to analyze why this is so. 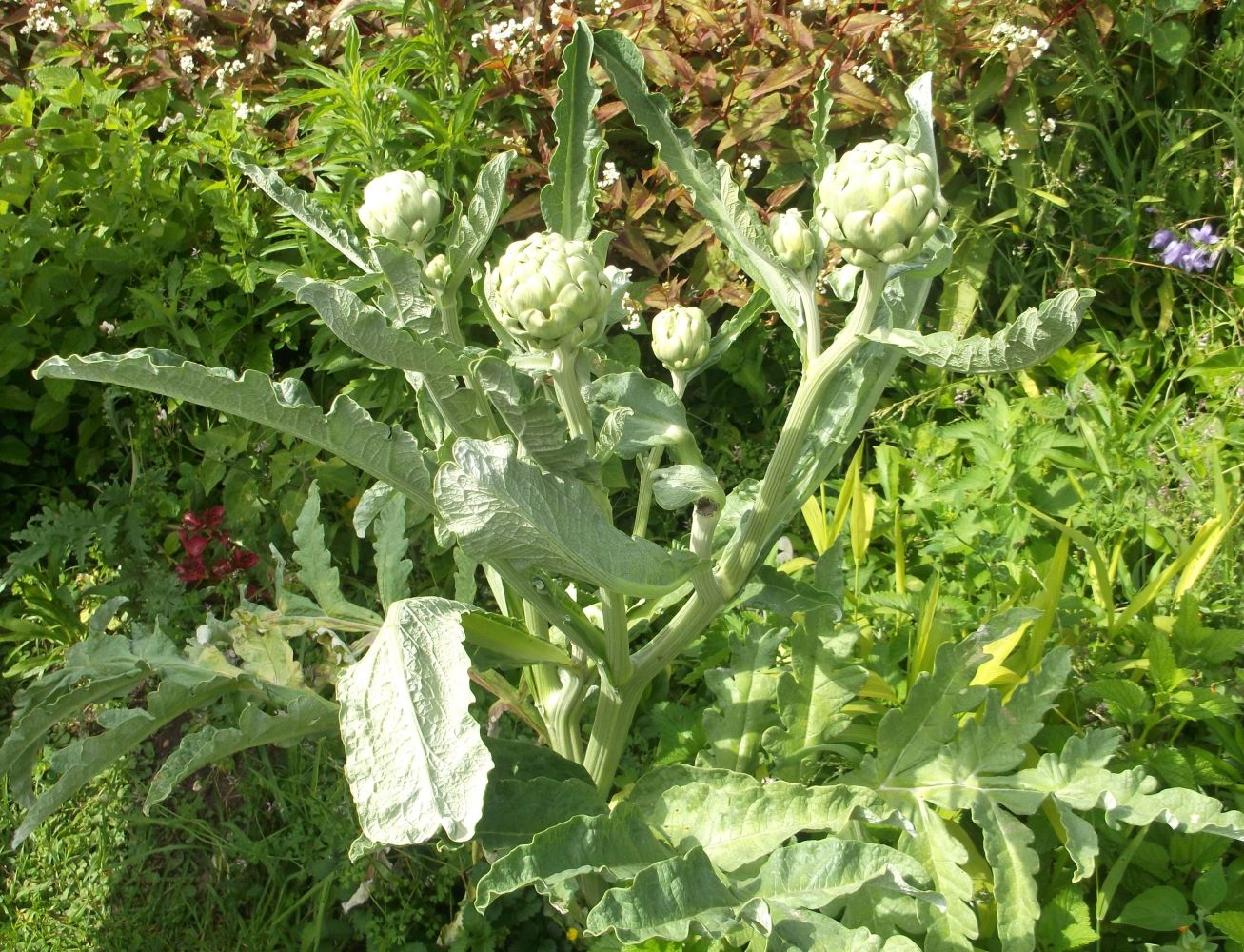 The environmental needs of globe artichokes

According to my research globe artichokes are not that tough. When one knows what they need, some of the confusing results when growing globe artichokes are explained. Firstly they need wind shelter. This may be why they did better on the west of the guava tree, protected from the lashings of the South Easter. The area of the wetland is also protected by a high wall, with a lanky rose with long shoots hanging over the wetland breaking up the turbulence. In the garden in Camps Bay they were in a sunny spot, but protected behind a glass wall. In Constantia the garden was very sunny but sheltered by fruit trees and lavender hedges.

But in the clay garden and the very sandy garden they were buffeted by the wind. However, they had irrigation, underground and above respectively. The research says they do need to be well watered. This is a bit counter intuitive for me, because I would think a hardy thistle would burst into bloom when it was punished by drought, but this seems not to be the case, and growing globe artichokes is another story. Those big soft leaves wilt easily, and may lose a lot of water, and the plant may suffer too much, whereas thistles have harder skin, generally. 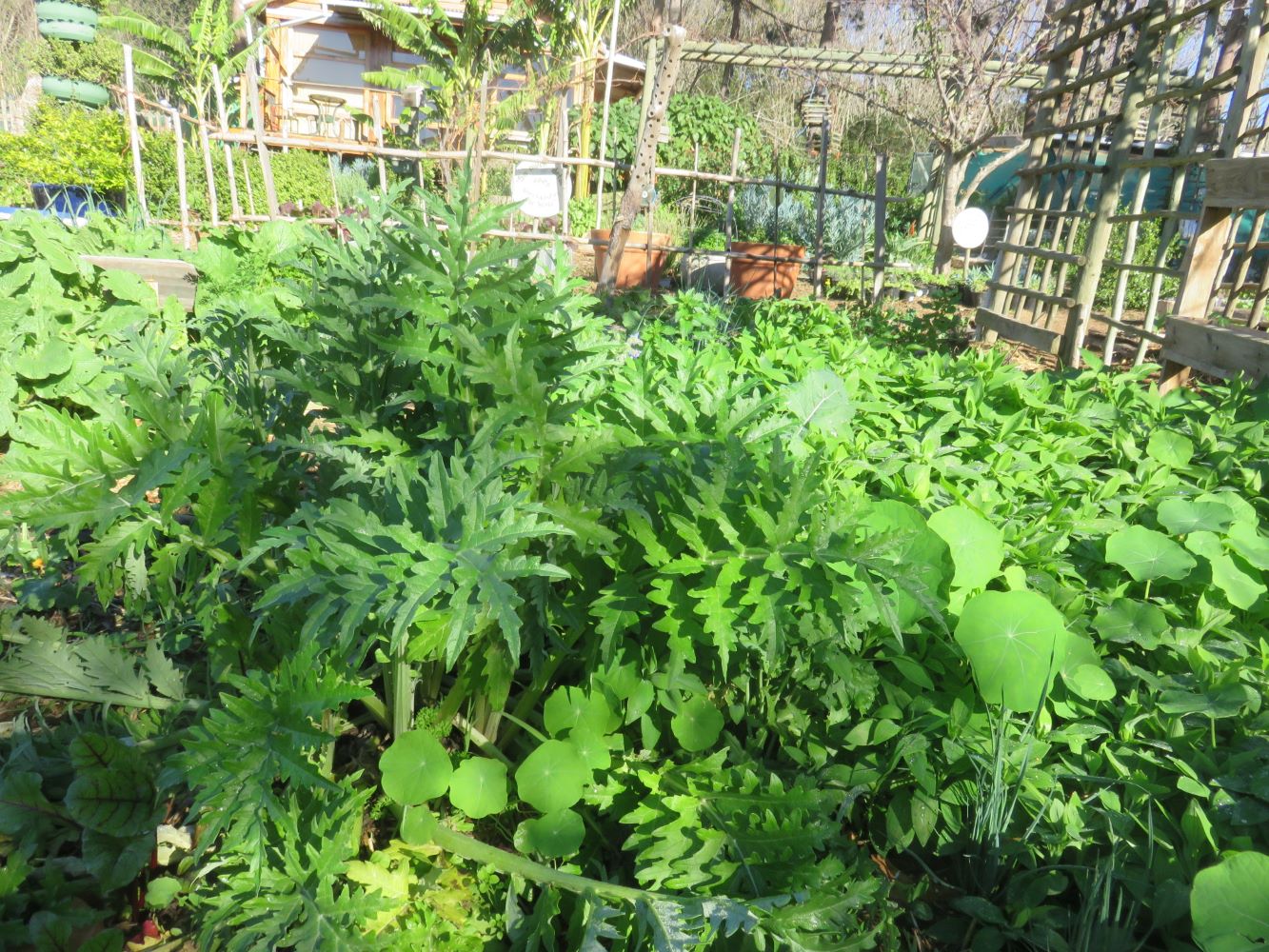 In the best possible soil, partly shaded, the plant is very green, with no buds.

They can survive in sun or shade, and this is proved in my garden where they are shaded by a tree for well over half the day. But if I think back, the places I've seen them flowering were very sunny. The two gardens in Constantia differ here. They flowered in the sunny garden, and I saw no buds in the shaded one, although this garden has arguably the best cared for soil in Cape Town, at 'Soil for Life'. It may have been the time of year. But growing globe artichokes is not always simple. In my garden they died in a spot which got very sunny in summer. This was during the drought of 2018-2019. I had cut back a lot on watering. The soil they were planted in was in a sunk bed, and it wasn't very enriched, though it did have a lot of carbon rich old material, the residue from an oxidized hugelbeet. The bok choi and chard pulled through but the artichoke died and never came again 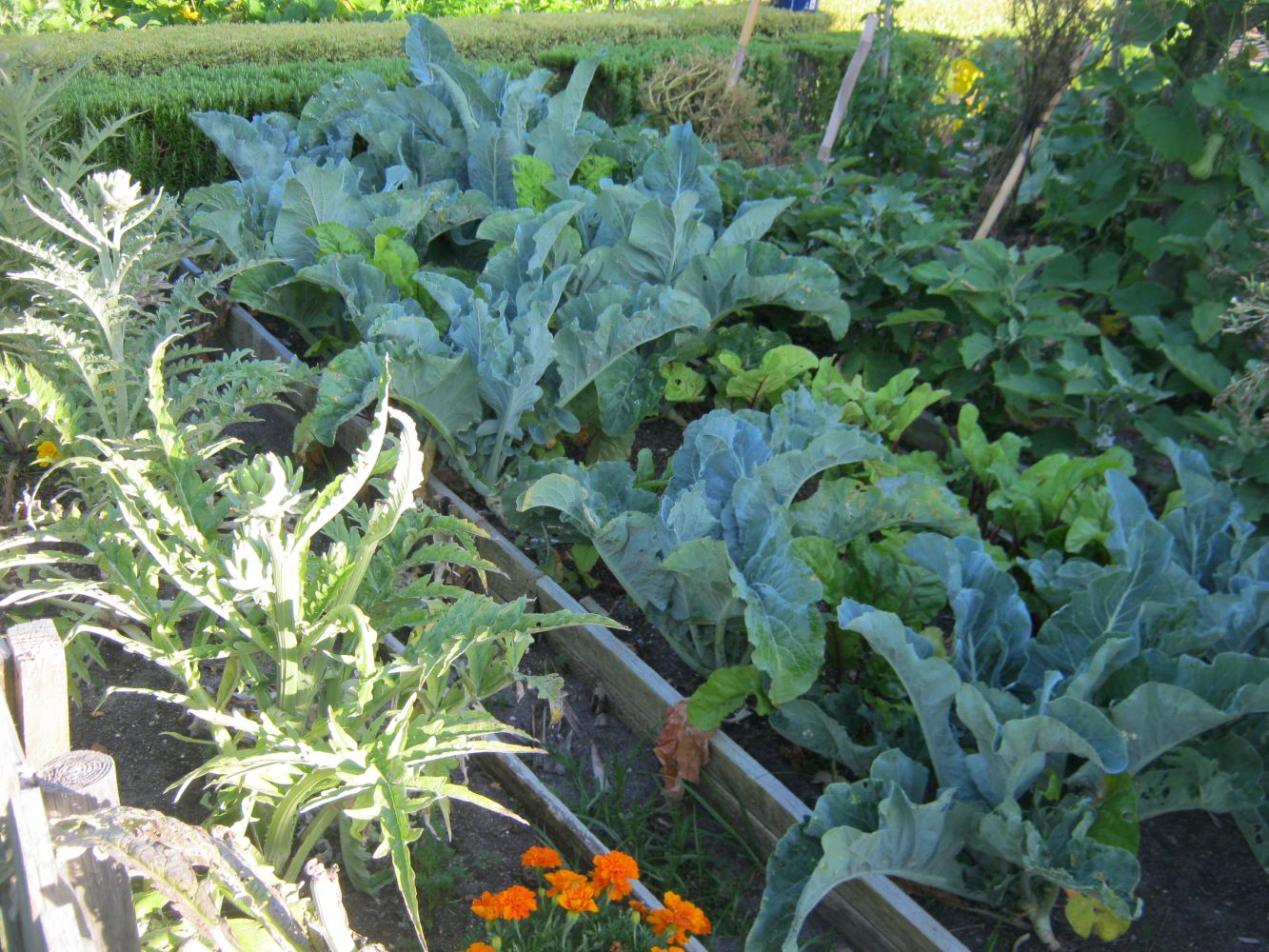 Growing with other heavy feeders, like cauliflower, in loamy manured soil.

The right soil for artichokes

Artichokes are heavy feeders, they need very fertile soil. In all the gardens I've seen them flowering, the soil was well cared for and enriched with compost, and or manure, making it slightly acid, which artichokes also love. All except the clay soil, where it merely had a covering of old wood chips, and the compost had long since blown away. The clay garden is on the lower slopes of Table Mountain and may have more minerals than the leached sand on the Cape Flats. It was fed with grey water which can also be slightly acid, depending on the soap and the degree of decomposition of the organics in it. That may be what they need. As thistles, colonizing bare rocky slopes in their ancestral form, one would expect them to like minerals. The clay would also have held water extremely well. Not much else survived there. The artichokes in clay went down with a blaze of purple glory in the drought, on very large flower stalks, the biggest I've seen, when nearly everything else in that garden succumbed. They self seeded, coming again. I saved some of the flower heads. This seed came up in my seed trays like hairs on a dogs back. They were super viable, probably with built in epigenetic hardiness too. They are the source of my current new plantings.

the first artichoke head from new stock under the guava tree. 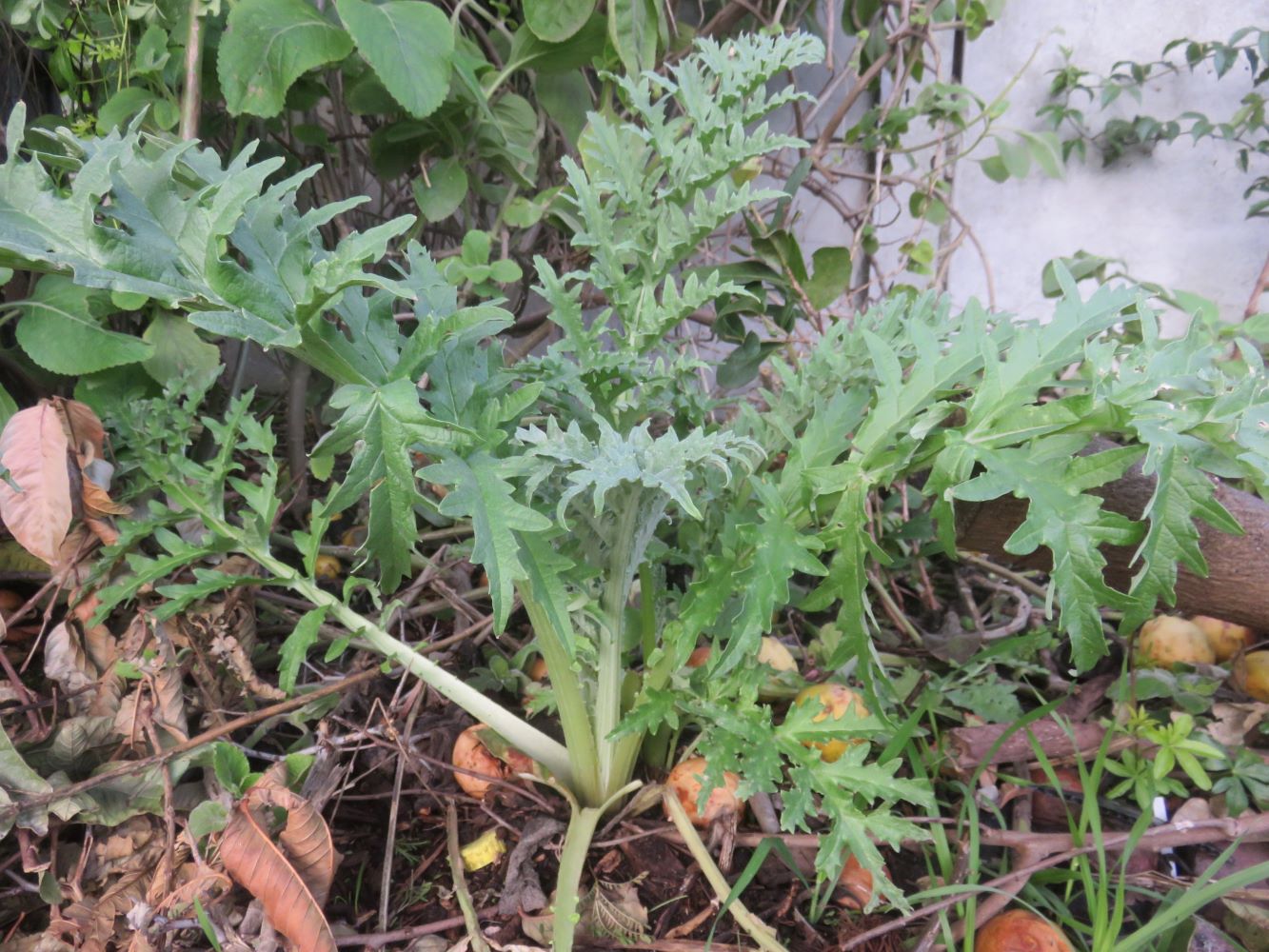 The old plant died back in summer and re-emerged with the rains. The fallen guava fruit may make the deep sandy soil more acid.

The old artichoke plants in my garden were peaky, and the seeds came from a mail order catalogue. About 10% of those mail order seeds germinated. None of the Violet de Provence (purple leaved) survived beyond the two leaf stage. This mail order company does send us non viable seeds from time to time, but perhaps artichoke seeds need to be fresher, and get some help against disease. Worm castings are the only way I know of keeping plant fungi down naturally. Globe artichokes can also be sown direct in spring after the last frosts in cold countries, and covered with straw when they die back, to overwinter, though I have no direct experience of doing this. It sounds sensible.

The essentials for growing globe artichokes

So what we have to remember when growing globe artichokes is that they do have a lot of needs after all: wind shelter, plenty of water, rich soil, slightly acid (pH 6), lots of sunshine, and one optional add on, clay minerals. Without the first few they may just die off, without the sun they do not flower so well, and with the clay they seem to get larger.

I have planted the new seedlings out in the rainy season, in the wind shelter of bushes or trees,  away from the prevailing winds, but taken care they all get the sun. The planting holes were enriched with rock dust, manure and compost, and the surface with an inch layer of vermicastings, and then coffee grounds, which is supposed to produce the slightly acid pH of about 6. After four weeks they are still alive. They will be periodically watered with brews containing fermented weeds, urine, rock dust, kelp, clay, and worm tea, as it is recommended they get liquid fertilizer regularly in summer and I want to do it the organic way. Ferments get slightly acid. I have even sustained blueberries with them. Coarsely crushed eggshells seem to help keep snails away thus far. 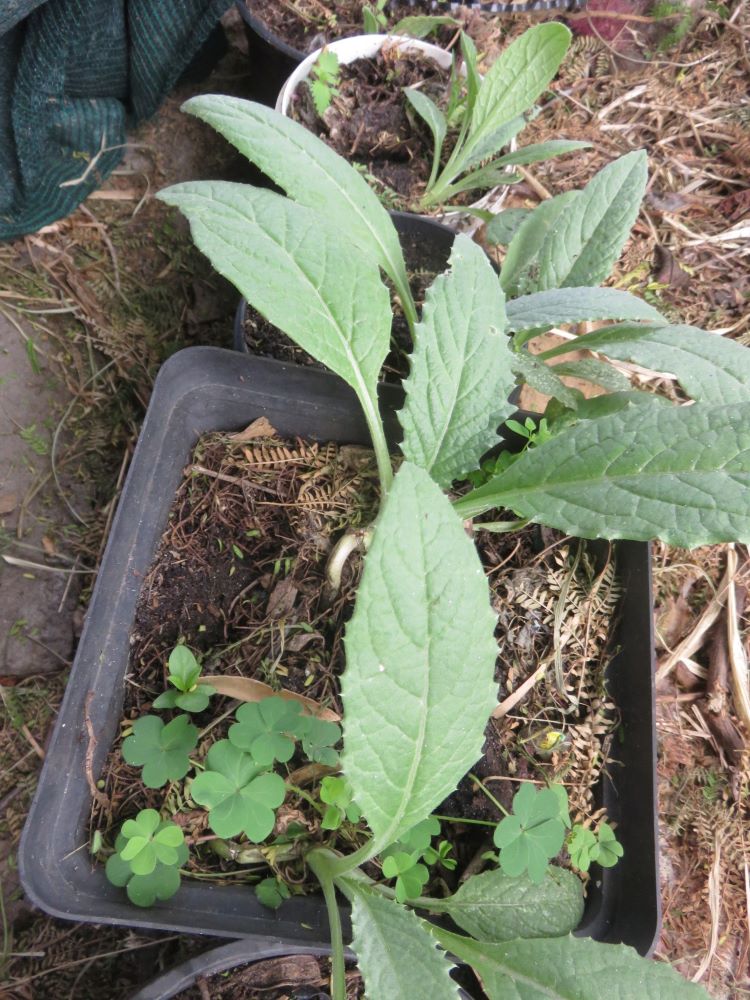 The new 'batch' of artichokes put on new leaves in a wind sheltered corner of the garden.

If you get to the point of having flower buds, you may need to stake them to keep them from falling over, but I've never seen this done. I mentioned that the most splendid flowers came in the heat of summer, in the clay garden. They grew very tall without support. The edible buds should have been harvested before they flowered but the rich purple is lovely to see. The plants in my garden, which so far have only been leafy, died back in summer, and have burst back into life in the rainy season, now, when it is bitterly cold with snow on the mountains. It gets cold here, but we don't get freezes except at high altitudes, on mountain peaks where no one lives. Artichokes can't take heavy winters with frost.

One should plant two or more plants per person eating. The globe artichoke apparently contains some powerful antioxidants and can help lower cholesterol, which I need. It is also high in fibre, and in this regard I've heard it mentioned by most of the American experts on the gut micribiome. It is one of the best probiotic foods. Probiotics feed our good gut flora with complex, indigestible starches, as opposed to prebiotics, which contain the microbes, in live cultures.

Like asparagus the globe artichoke has a reputation as a gourmet food. However they are both very healthy too. Both create a splash in the garden, but the artichoke is decorative in a different way. I first saw its beauty in the Camps Bay garden built by a designer well into her eighties. She was a master of the flower 'border' and coupled grey leaved artichokes with indigenous red brown Nemesias. I think there was just a little bit of white Gaura as a backdrop. It was an exquisite planting. I wish I'd been able to make more of the opportunity of education under Els Greshoff. I am always reminded of her at the sight of those silver leaves with their intricate and forceful splendor.

home page for links to lots of other natural gardening articles

perennial vegetables and their advantages