Protesting the loss of street trees in goodwood

Street trees in Goodwood are under attack. Look around you, everywhere the scars of dead trunks, the dying branches of poisoned trees and the hum of buzz saws. 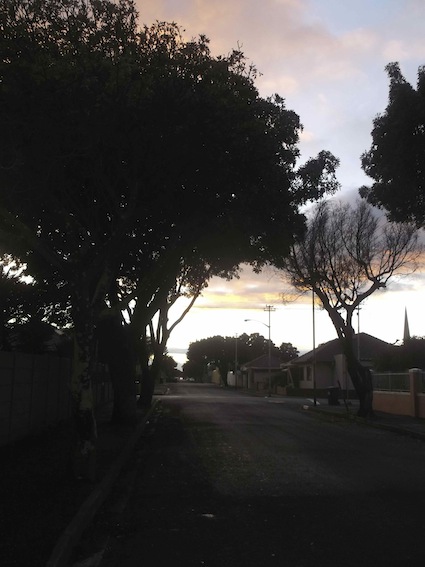 Dawn in what used to be a green street in goodwood, an unbroken tunnel of trees

I am very excited by some trends in Cape Town. So many people in green NGO’s everywhere, greening the city. And then others reconceptualizing it entirely from the ground up, such as this project I hope to write more on:

Grass roots is such a green idiom. Then again there is always reason to be sad, if you live in Goodwood. We are so direly in need of the spirit that powers up through those grassy roots, the spirit of greenness, and growth.

If we were to use "nature" as a model, as laid out by Janine Benyus in the philosophy of biomimicry, in which the inspiration for science and engineering and design is taken from eco systems, bees wings and more, to solve the toughest of the 21st century's problems, then a start would be balance, especially in carbon absorption. How poetic for the street, with its paving of bitumen, that sticky substance the remains of long dead living things, to be shaded by growing, living trees absorbing carbon.

Balance the bitumen and fossil fuel burning cars with trees and pavement (sidewalk) plantings, of useful trees and useful herbs, that is a solution.

Long ago an activist in our area campaigned for street trees. Goodwood was planted, but not Parow. The street trees seem to have been selected with a well intentioned but patched eye on indigineity. That was back then. There is Harpephyllum caffrum, a tree bearing delicious indigenous fruit, and indigenous Ficus, both South African trees but not local ones. When I first moved to Goodwood 20 years ago the streets were lined with trees and this street seen above at sunrise, was a dark unbroken tunnel of trees. Walking along it at dusk or in the early morning, the most romantic side of Goodwood came out of hiding. One of the only times beauty touched the suburb was in the half light. The dark inky shadows of the street trees, the pale yellow moons of lamps in all the windows, some yellow light shed on a garden, I wrote about it, I used to go out and paint it a lot. Now that too is gone.

One by one the street trees are dying and being cut down. The sound of buzz saws is part of this place. I found out that the residents are actually having them removed and the city co-operates. The dead leafless tree seen in the picture above has been poisoned. There are many drilled holes at its base and it has been ring barked. It fought on for a season and then died. Soon the buzz saws will come. This street is no longer a tunnel of trees but a remnant, a few here and there. The pavements are scarred by the humpy circular cut off forms of former trees. How could this be happening… what are people thinking ?

why are goodwood's street trees being cut down ? 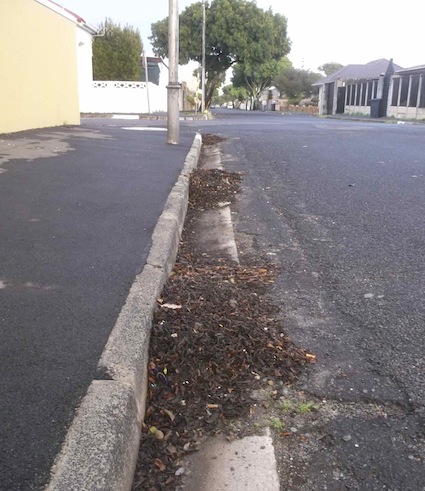 "tree huggers" are mocked and shamed

The trees absorb carbon, shade the street in the heat of summer, so that you can park your car in the shade, they cool the temperature of the whole suburb in those hottest months, and the beautify the neighbourhood. I once spoke to a neighbour about this and she said she had thought of having ‘her’ street tree removed, because people call her a tree hugger for wanting to keep it. The only explanation I have had from anyone as to the need for their removal is that they drop leaves and berries. Now these piles of sweepings in the picture above are very far from the nearest street tree, so they will have to remove all the trees to stop that problem. Apparently sweeping the street is too much work for the residents. Why they don’t just leave the debris in the gutters I don‘t know.

tree conservation is not in this areas education, shame on the schools really for missing a great opportunity

The people in this neighbourhood have a strange kind of animosity towards all things vegetable…. There is a war on… where there used to be vegetable farms 70 years ago, and veggie gardens 20 years ago there is now concrete pavement, meat is eaten with intensity, trolly carts full of meat leave the supermarket at month end, there is money, and loads more of it than I have, so you cannot blame that as much as something else, some other factor like education in the schools of the area, making my planned library greening project a vital project for Goodwood's soul. Neighbours cut down your plants when you are away for the weekend…. people complain about my plants, they are dangerous, they could breed snakes etc. there is an intense chlorophylophobia. Peep over a high wall expecting to see a secret garden and all you’ll see is a secret expanse of concrete dotted with dog excrement, before the dog takes your nose off.

Why why why, when having plants is the cheapest way of accessing quality of life. The leafy suburbs are envied for this luxury, and leaves do add beauty and pleasure and ease of mind. Research has shown that a walk in green is more physically  beneficial to the brain than a walk in a concrete jungle. This is a no-brainer, and on the subject of brains: leafiness is so easy and cheap to acquire, but in Goodwood we are throwing all this free affluence and brain benefit out with the trash.

Not only that, throwing away the sweepings is throwing away a precious asset this suburb badly needs. Those piles of berries and leaves in the street, dampened and composted by the gutter water, are a wonderful mulch. They are work-saving, not work-making, because with twenty minutes of sweeping and mulching you save yourself hours of back breaking work. If you mulch your flowerbeds with a thick blanket of street sweepings no weeds will grow for several months. Those street sweepings could cure the local disease, of strip desertification around the edge of the lawn in meagre over weeded and raked flower beds with sick plants. But no, the residents actually pay other people to sweep up these leaves and put them in the dustbin, onto the landfill at Vissershok which dwarfs Table Mountain.

Goodwood is blessed with this greenness, and bird action by the actions of an anomalous anonymous person in the past with green consciousness, we have trees when the surrounding suburbs of a similar socio-economic make up and group areas history, like Parow, are desolate concrete jungles… we are awoken by birdsong not the traffic, or so it used to be..  how can people see this as bad and start stamping it out, or buzzing it down ?

fruit and other useful street trees

I suggest planting those trees right back where they came from. Some research on trees that don’t shed too much, or lift the pavement, or get too big and require expensive trimming by the city may be needed. I am partial to olives, they are useful trees, indigenous to Africa and most of the middle east, and also provide medicine and fruit that can be turned into a cottage industry, and oil that is profoundly central in food and faith around the Middle East and Mediterranean, but there are many other options.