The city planning genius of a young Capetonian town planner, Sizwe Mxobo, was recently acknowledged with the Young National Planner of the Year Award. He was interviewed by Rashiq Fataar on the website Future Capetown. I felt I had to write about this brilliant young designer, but there isn't a lot of information about him out there so I rely on the interview.

Please pardon me for misinterpretations while I try and relay what he stands for. He wants to introduce residential informality to city planning to increase social cohesion, and his concept is taking local urban design circles by storm. He works with CORC (Community Organization Resource Centre), on area planning managed jointly with communities with services in need of upgrading. By 'informality', presumable drawn from the description 'informal settlement' is meant a citizen based design process, because with informality, citizens create the space they want rather than it being a given from the city, which they have to accept. 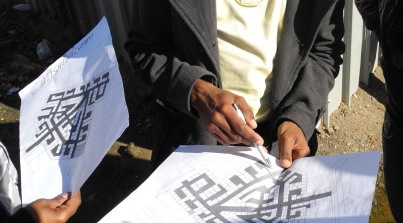 As this picture is available to pin on pinterest I’m assuming its open source. I could not contact the website (no contact page) to ask permission. If they object I’ll take it down immediately. I trimmed it down to focus on the fascinating urban design.

The design Sizwe Mxobo holds in one hand as he confers with some people, in the photographic accompaniment to the article, is not your usual S’African grid pattern for the city plan. The houses spread in a fan shape, like a heiroglyph of some kind, a letter A. My heart roars yes yes yes. This vision resonates with seeing cities from the air as abstract works of massed intelligence. As a South African who flying over this country, took rigid grids to be a norm, and flying over some other European cities, not having this delusion completely shattered, coming down over Lagos shows there is another way. Lagos too, over large areas, has been designed from the ground up, taking shape around the needs of house builders unrestrained by rigid municipal boundary rules. But according to Clement Mamadu, one of my lecturers at UCT in 2009, in his seminars on the African city, people still find each other, post and parcels gets delivered, water mains get laid. Rigid, straight grids do not need to define large scale city plans and macro-organization. Lagos with its organic growth looks more like a vision of the heavenly city in Renaissance painting, from the air, in contrast to the Napoleonic or Stalinist city designed around big straight boulevards which has became the norm for urban grandeur in the West.

This city planned by its citizens, its massed effect can only be appreciated as abstract art from the sky and this view isn’t much use to people on the ground.  But its freedom and wholeness is. It is not the grand scale but functionality on the human scale which is top of Sizwe Mxobo's agenda. The space fits around humans rather than humans fitting into the space, the space is created in the human mould. Township dwellers take over the management of a space and replan it, whereas state planning silences participation in the creation of spaces in an authoritarian manner.

The interviewer raised the question as to whether this creates disorganization and Sizwe insists not, citizens plan in their own way, to create a space for themselves that is more effective. He cites different townships and the differences in how their layout works or doesn’t. Delft and Samora are grey and lifeless, with long roads, dormitories for commuters rather than a community. We need to move away from creating such undesirable spaces to creating liveable spaces. In contrast the informal settlement, Marikana works. City planning is shifting from eradicating informal settlements to upgrading them, and the planning process is becoming more democratic. Its called ‘reblocking’ and is done in clusters which are picked out for improvement by the community. Space for safe courtyards, productive areas and services are created. Reblocking basically provides services and greater safety to dwellings which are still shacks. He cites Lotus Park and his latest project, Flamingo Crescent in Landsdowne. The interviewer asked him about obstacles and he admitted that the struggle to get buy in, to get people to help themselves, rather than wait interminably for free government housing is a hurdle, but that some amazing community activists have taken initiative in all instances.

It has been recognized that government cannot fulfill its housing supply fast enough and improving informal settlements is a way forward, and the DA (city governance run by a political party the Democratic Alliance) sees it as a way of servicing more people. He sees planning as bridging the gap between space and the citizen. Intelligent planning needs to consider human interaction. On a broader scale he dislikes Cape Town’s lack of social and spatial cohesion inherited from apartheid. He has a plan for this too, that instead of selling off pieces of land to developers, the city could give these spaces to planned informal settlements. This would knit the fabric of the city into one large whole with social cohesion.

I think we do need to move away from the extreme level of spatial separation of the poor and the rich that we have in Cape Town, it just exacerbates the social inequality.

For me this is a great development, and hopefully it will not just die when concrete and other building materials eventually replace the shacks corrugated metal. Sizwe Mxobo is for me a great eco-city designer. I think being an eco city is not just about having green spaces, growing organic vegetables and reducing carbon emissions. The the thing which he calls social cohesion, liveability, and I'd perhaps call user friendliness, and above all empowering the citizenry to shape their own living space, in this country, comes first.

eco cities and what they are