Growing mushrooms outside in the garden 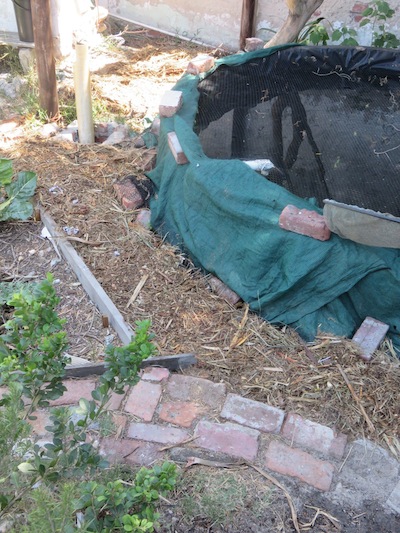 The bed for growing mushrooms outside circles the pond

Growing mushrooms outside in the garden can be integrated with your soil improvement regime, as a mycelium rich soil has many benefits.

I decided to use it on the bare areas of sand exposed by our pond building. One can take the benefits even a step further by taking our processing from food to humanure and then composting which I’ve maintained for years, and closing up the cycle bringing the end back to the beginning, creating food directly on composted humanure and moving a step further into independence.

First we grew mushrooms inside 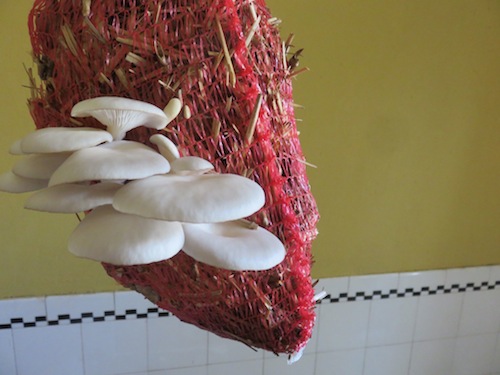 Our first oyster mushrooms were grown from cardboard spawn

Recently our first successful oyster mushroom growing project bore fruit. We grew our own cardboard spawn using the Guerilla House method, and used a rather expensive straw imported into the home ecosystem as substrate for fruiting. It was sterilized and we operated under sterile conditions, or as close as possible in a domestic situation, hanging our growing bag of straw in the bathroom. 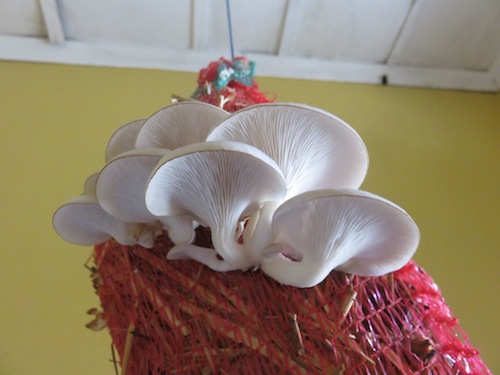 Now I’m going wild. I want mushrooms that don’t need coddling. I want to grow them in garden beds, to cover the newly exposed sand, and after that to sow cover crops before planting the beds to winter vegetables.

How I'm preparing for growing mushrooms outside in beds 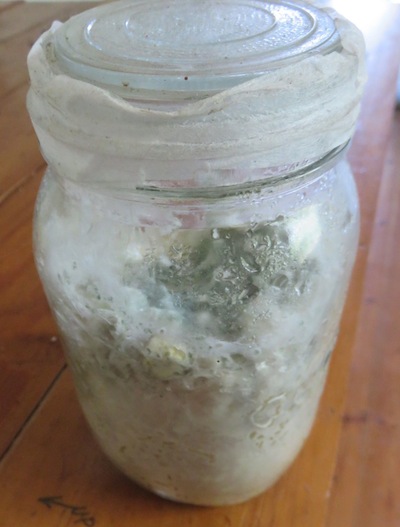 Rice spawn several months old and kept in the fridge

I used my own home made rice spawn and it was mushy and cheesy and though it also smelled of mushrooms, and I spread it between layers of damp cardboard, which is an ideal food for oyster mushrooms whereas rice is not, it may still be outcompeted by the cheesy molds growing on the rice spawn.

If it fails I'll just try an easy method of growing cardboard spawn and start again. 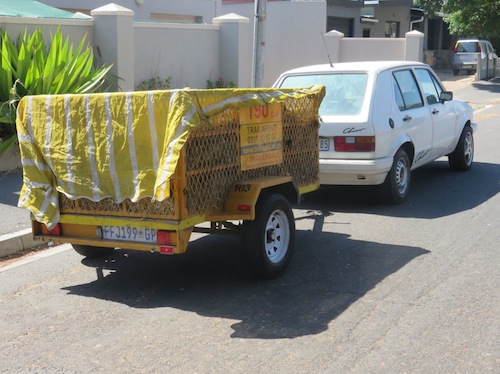 We brought in a hired trailer full of shredded garden waste from the city drop off. Half went to my gardening client for their compost heap and half came to us. I used a sixth of my shredded garden waste for the garden bed seen at the top of the page for growing mushrooms outside in the garden. The bed consists of spawn sandwiched between wet cardboard and covered with this woody mulch, and the rest of my waste I used for the cubic meter compost bin for humanure composting. 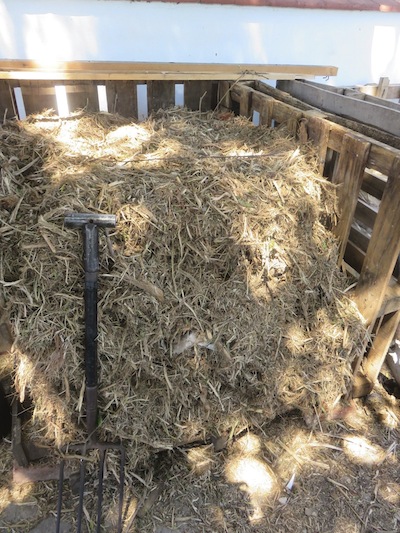 The shredded garden waste in the humanure composter

A way of growing mushrooms outside with even more benefits

An ongoing idea of mine is to use my compost mix of organic garden waste and our fecal waste for growing mushrooms. This humanure compost is a compost I’ve been making for more than a year and produces excellent results in the garden. Another knock on effect is low water usage, we find the city’s per household goals for the drought this summer easy to reach, while most other households are groaning. The fee differential between careful and wasteful water usage is now so huge, we will save a lot of money with the way we do things. 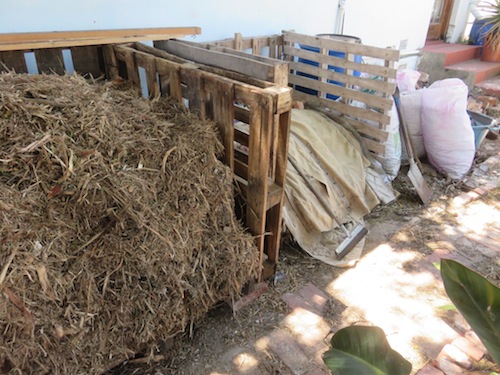 Our Humanure composting through time, from the new pile, to the old pile, and then even older bagged compost

Here is our present humanure composting system. The straw awaits additions of humanure with no urine, direct from the bucket we keep in the bathroom. After several months it collapses from the high N content, and is moved into a second bin where it sits for a long time just for pathogen control. Then after another half a year it is bagged and you can see the pink bags. These are inoculated with mycelium from our own garden mushroom which seems to be a coprophile. That is it feeds on manure. 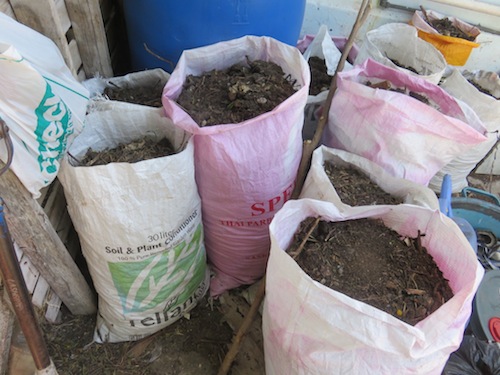 The bagged humanure compost contains mycelium from our garden mushroom

All of this is done because bad strains of E.coli can be killers for old people and babies so I am extremely careful incase my mother ever eats something from our garden. 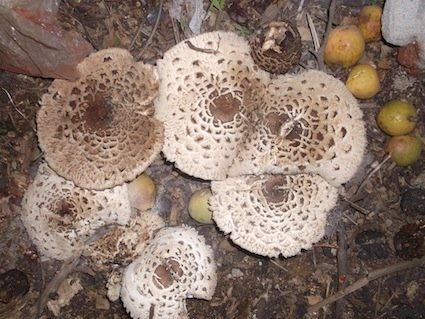 Our wild garden mushroom which grows where it will

The first compost pile is very nitrogen rich and gets so hot it can burn you. This heat will help dispose of human gut pathogens like E. coli. Sitting time of the compost in the second chamber is another factor. Ideally sitting time should be two years. Those pathogens that survive will be digested from now on by mushroom mycelium growing in the pink bags, a very effective E.coli filter, for gray water too, and if anything remains the earthworms which come after the mushrooms have finished with the compost will clean up the remaining E.coli. The humanure compost will thus yield mushrooms and then vermicompost which will be used for growing roots and fruit vegetables in the garden beds.

If I can grow mushrooms on human feces I will be adding to the yield I already get from the humanure, as well as closing the energy and nutrient cycle of food inputs, humans and their outputs, and food production in our garden and saving so much water and all the other invisible environmental benefits. I think its a worthwhile experiment.

home page for links to lots of natural gardening info

fertility and saving your soil

how to grow mushrooms at home