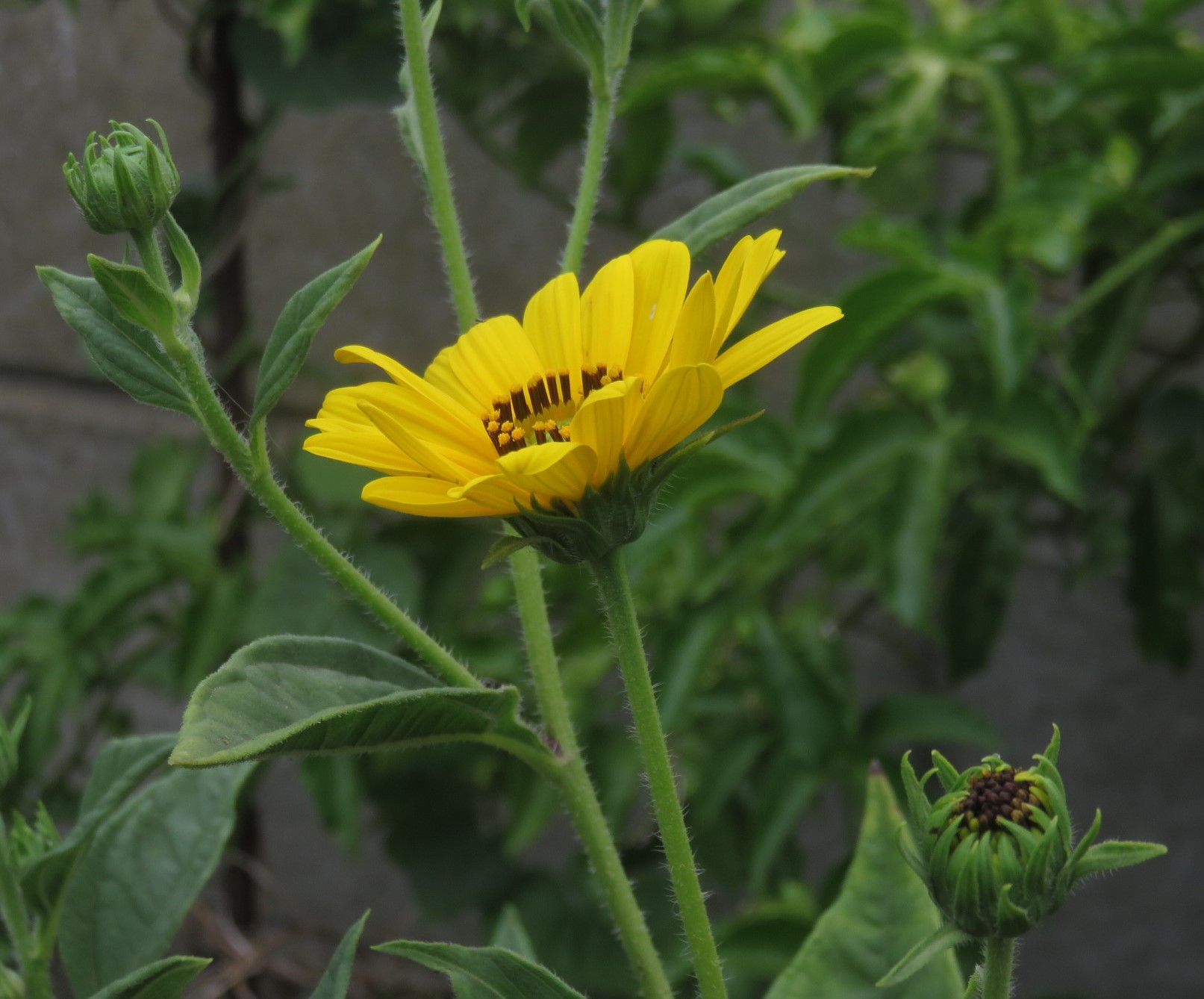 Growing Jerusalem artichokes is pretty easy. At least, it was in my experience in this climate. It was easy to get the plants going, when starting with a tuber from the supermarket. What was less easy was getting a harvest.

I've read that Jerusalem artichokes are not artichokes, and not even in the same family as the globe artichoke. The two artichokes may be perceived as having similar taste and texture, and thus the original plain artichoke lent its name to the 'Jerusalem' artichoke. An artichoke clearly becomes an artichoke on the tongue in this instance.

That they are not in the same botanical family is incorrect. The two types of artichoke share Kingdom, Clade, Order and and Family, actually. They both belong in the family Asteraceae. However, they do belong in a different Genera, and come from different plant parts. The part of the Jerusalem artichoke, or Helianthus tuberosis, that we eat, is the tuber of a type of sunflower, and the part we eat in globe artichokes or Cynara cardunculus var. scolymus, is the flower bud of a plant that belongs to the Cynareae tribe of thistles. 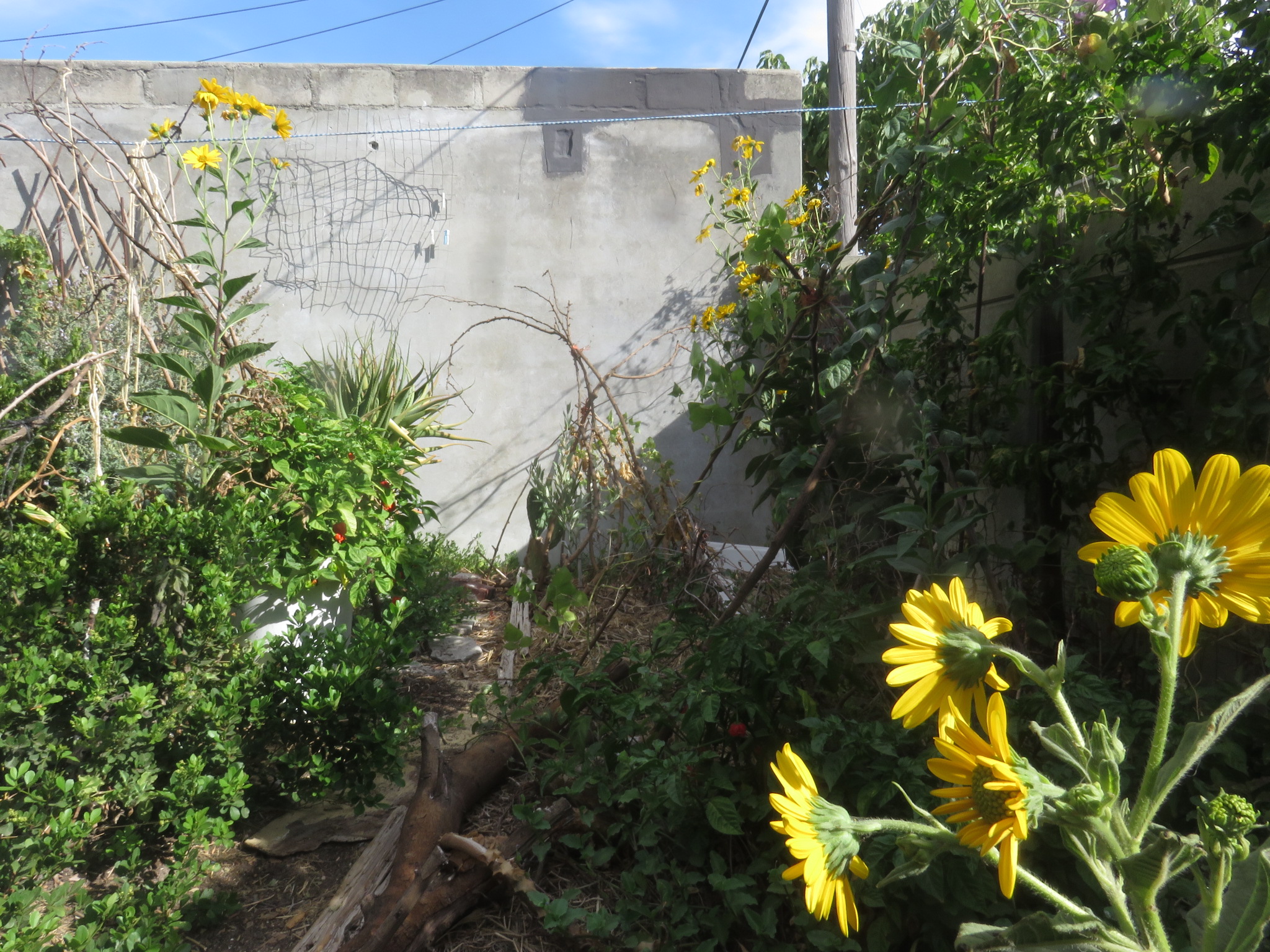 The sunchokes brighten up a dull corner of my backyard.

The dietary benefits of both artichokes

They may be only distantly related, but they are both known to contain complex carbohydrates that are good pre-biotics, nurturing good gut bacteria in the colon. In fact sunchokes or Jerusalem artichokes are one of the best pre-biotics known. At the time I started growing them I was very new to the study of nutrition and I did not want to start growing Jerusalem artichokes because they were good for the gut, but because they suddenly appeared in my local grocers, Food Lover's Market and in Pick and Pay. I grow a lot of vegetables from seed and seek out the opportunity to propagate vegetatively for the sake of more varied experience. I've tried turmeric, ginger, potatoes, taro, sweet potatoes, Chinese and African yams for this reason. Growing from tubers does work and I've had some results from all these attempts except from African yams. I've since found that as an added bonus, many tubers also contain good complex carbohydrates.

I started with some tubers in the late summer of 2017-2018. I planted them about 10cm or 3 inches deep, and nothing came. I thought that growing Jerusalem artichokes was really going to be tricky. Then the winter rains came upon us in June and I believed the tubers to have rotted in the ground. The winter passed, and lo and behold, every single tuber I had planted came up and produced leaves ! No one was more surprised than I was. In summer they had pretty yellow flowers that were a delight in the garden. Then recently, in late summer, or March and April 2018 the bed of sunchokes blackened and dried up. 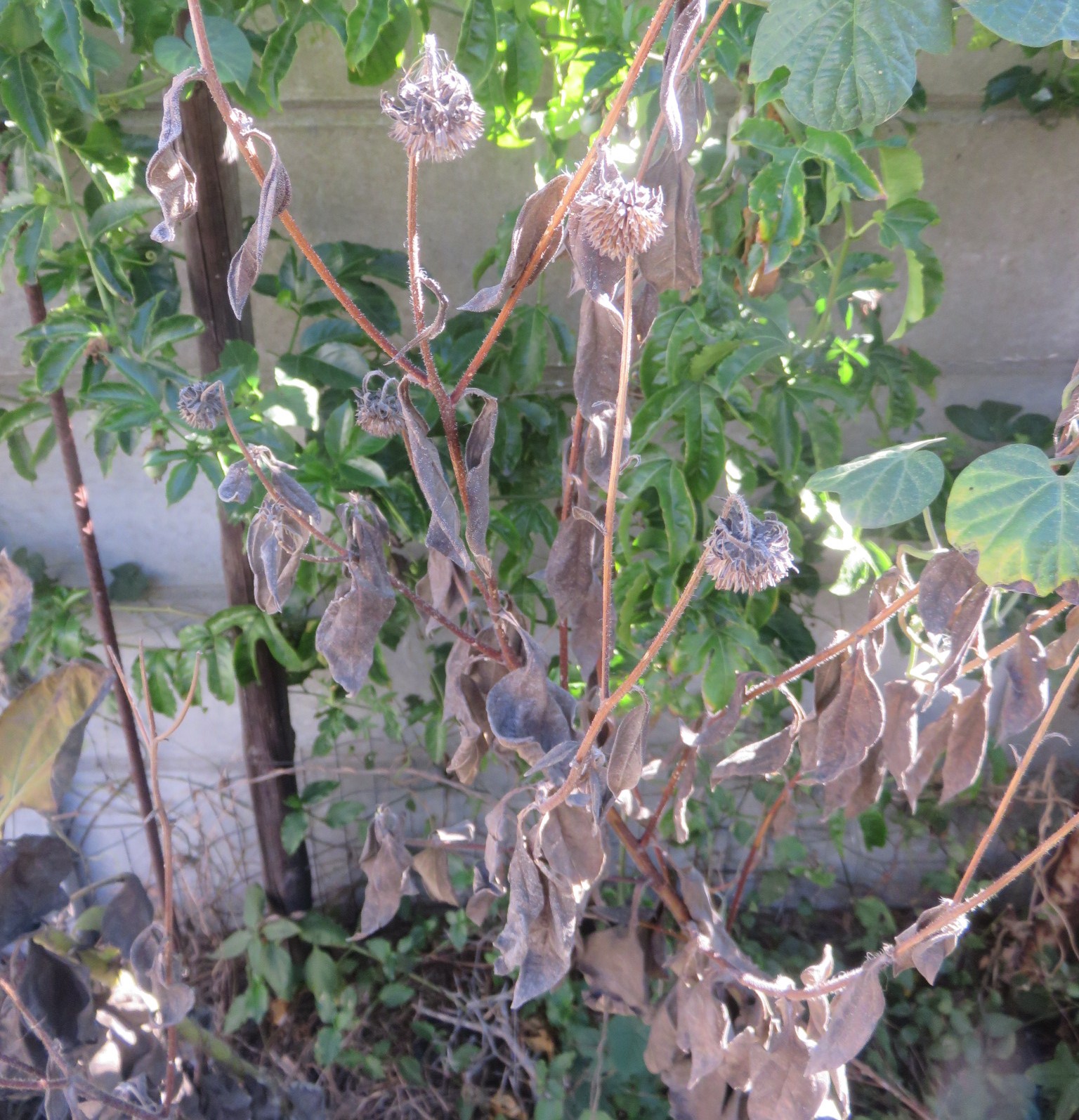 Between the end of summer and the beginning of winter. 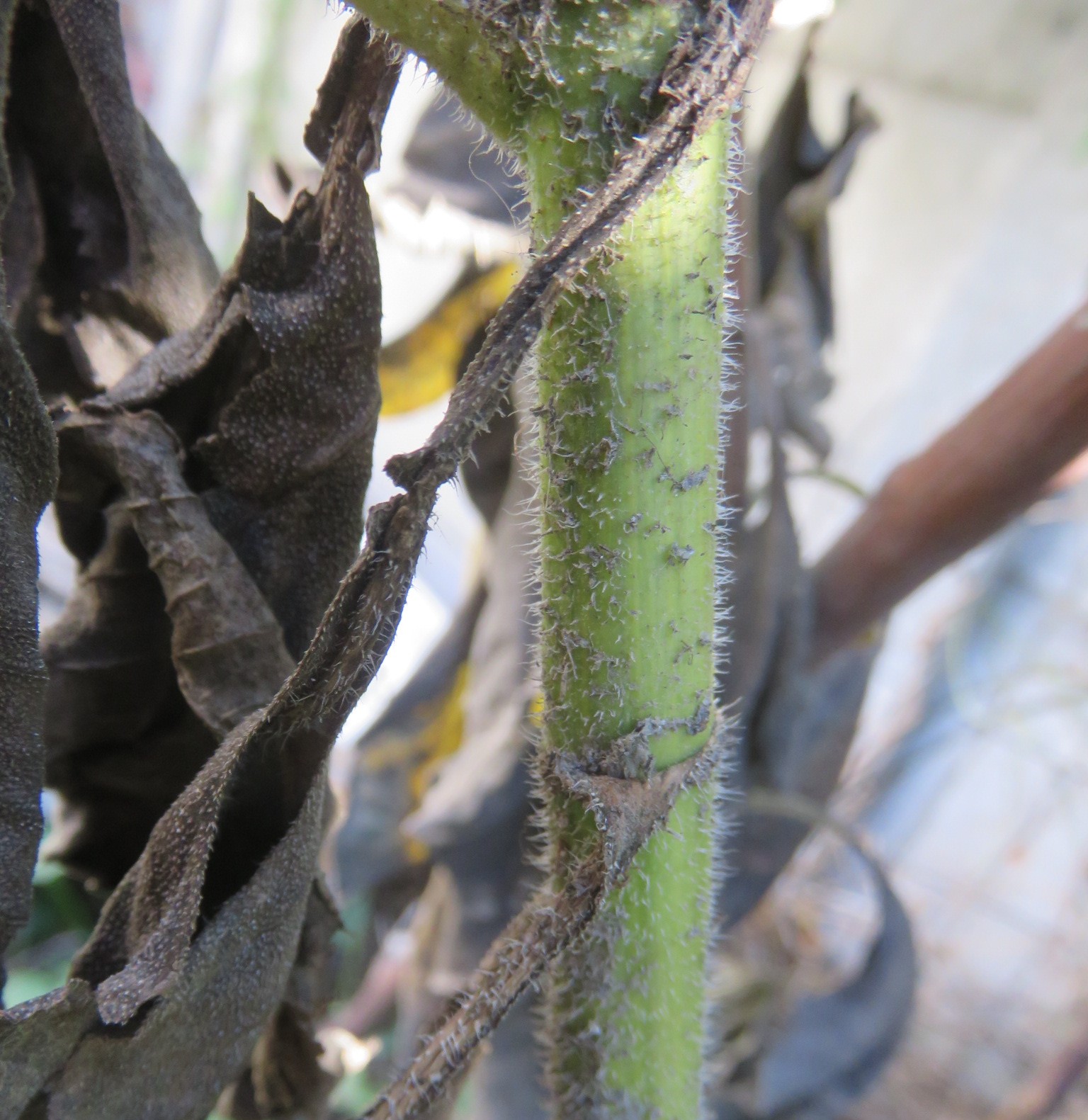 The stem which had the most tiny tubers was still green.

I thought it time to dig the new tubers out. I cautiously tried just two plants. The first showed only a normal narrow plant root with two or three long protuberances on the end of which were tiny swellings like lollies. This was on a plant that had dried to the point where the stem was black. I next tried a plant with dried leaves and a green stem. Once again there was nothing big enough to make a meal of, but there were many new, very pale bulbs of a slightly bigger size, from pea-size to pecan-nut-size. I replanted both plants quickly and covered the roots with soil. I will have to wait a few more years for a good harvest, I presume. 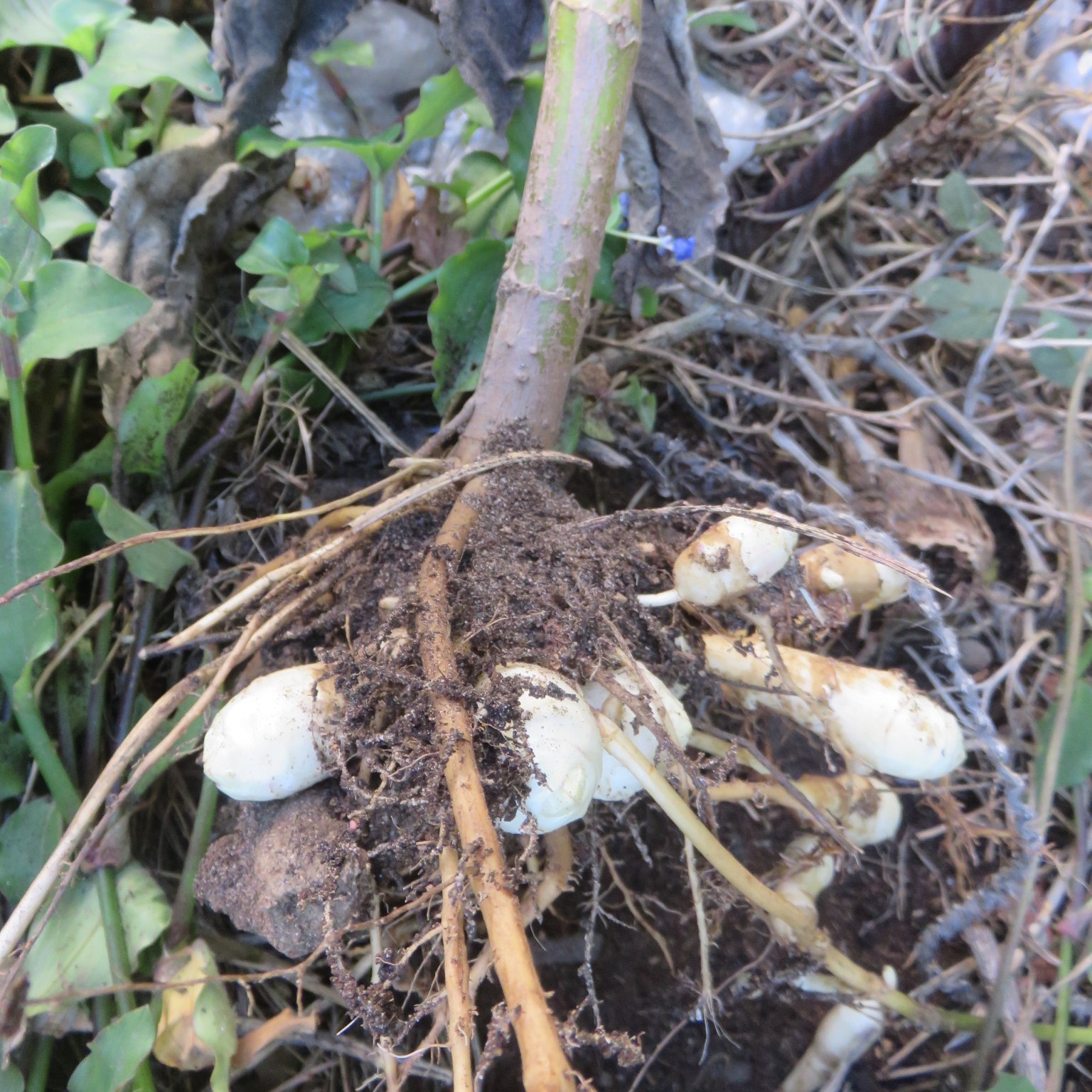 The difficult part about growing Jerusalem artichokes for me: getting a meal out of them. These are the tubers after a year. The biggest is the width of my little finger.

I've heard it said really often that Jerusalem artichokes quickly become invasive and have to be contained to control them. Perhaps our climate is wrong for them. They seem to be progressing very slowly. However I do have a more generalized problem with root development in my garden. I believe it is due to an inadequate supply of some nutrients, and perhaps residues of salt or pH imbalances. Our suburb, like the greater part of Cape Town, is built mainly on ancient wind driven sand dunes.

There is another explanation for the sunchoke's failure to produce tubers. In a youtube video by the gardener Huw Richards in the UK, he laments the lack of summer rain in 2018 impacting on his Jerusalem artichoke harvest. Perhaps the sunchokes need more water in high summer at the height of growth, because I did not water them at all during the 2018-2019 summer drought.

That said, the failure of vegetables with underground food parts is so common in my garden I've decided to invest in some volcanic rock dust. I also thought I should find some clay as its not sold here, and fetch kelp from the beach, for which I have a collecting license. I wish I could afford the lab tests, but I also need to trouble shoot from plant growth evidence, the way people have for millennia before the testing was available. The beds will have to get a lot more compost and liquid manures or teas containing the minerals and fermented kelp. Perhaps the presence of charcoal in the compost will slow down the leaching of minerals. If this finally brings success with roots and tubers, I will certainly be writing more about it.

In the meantime I'm happy to have at least done some ground work towards the garden I dream of. It will contain a diversity of perennial vegetables and indigenous insect host plants, and be designed with an emphasis on providing foods that supply optimum nutrition while supporting ecological diversity. The vegetables will also all be purely organic of course, which is also a nutritional plus. I use no agrochemicals, pesticides or herbicides, and I can never guarantee that the supplying farms of our green grocer do not. Organic vegetables are more nutrient dense, and perennial vegetables are even more so, but you can read more about why in my article on perennial food plants. 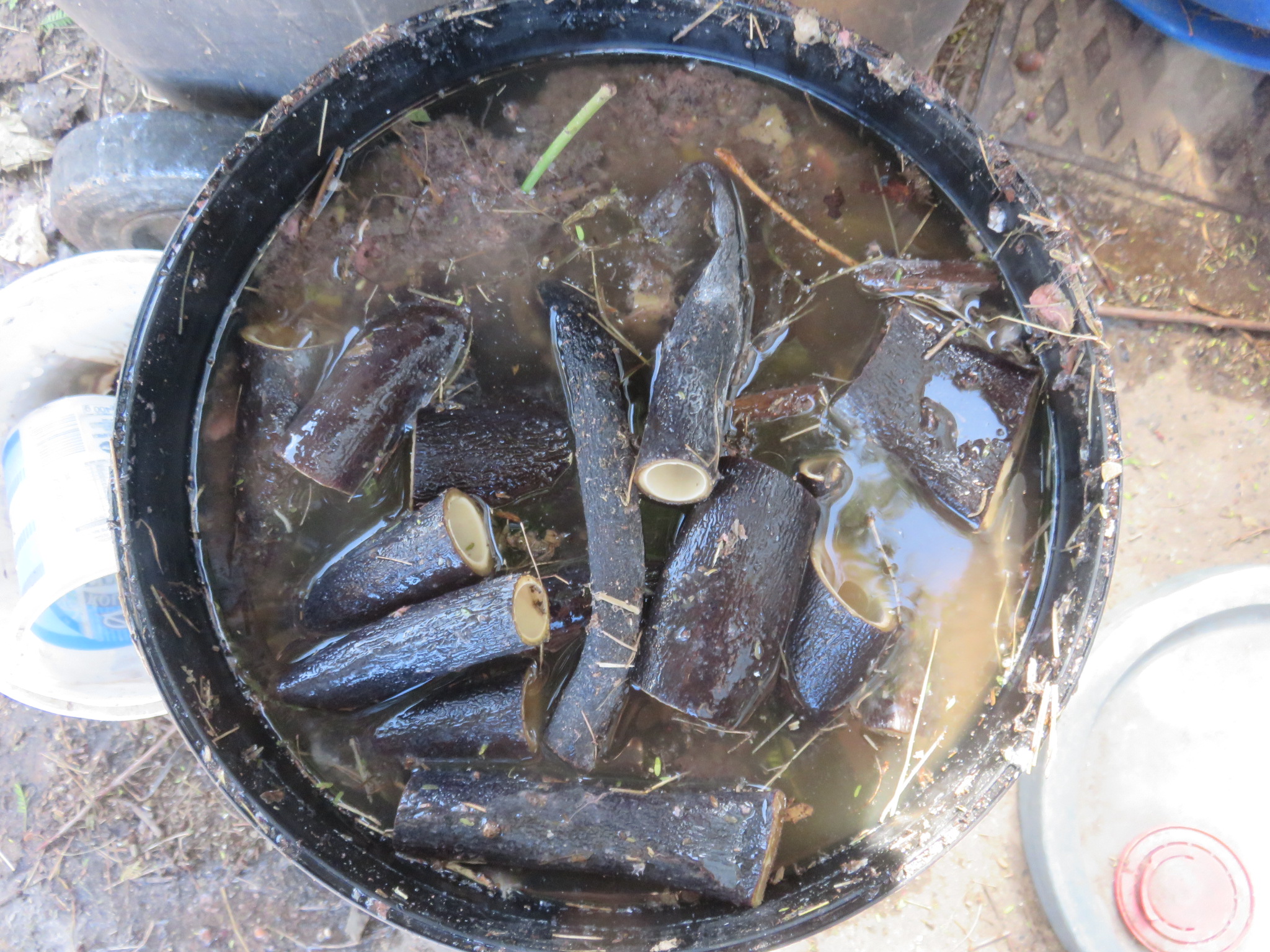 home page for links to natural gardening and food growing