the flowering garden xeriscape in the pink of late summer 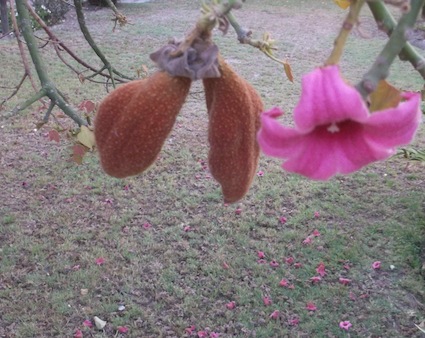 The flowering garden in late summer requires drought resistant plants. In the Cape your late summer garden is in essence a Xeriscape, if you are water wise, and some compromise is needed in terms of indigeneity if you want flowers. I'm beguiled by putting pink stuff in the garden. Its a counter intuitive colour for a Xeriscape, but it works.

THE DANGER IN THAT SPECTRUM OF PINK OLEANDER 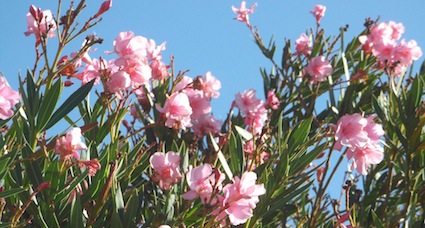 Oleander is very hardy in this region, but not only is Oleander poisonous to man, it is poisonous to nature in South Africa, invading river systems, and like Cyperus papyrus, it was a garden plant of ancient Egypt, I read somewhere. The Egyptian gardens were formal and linear, with Fishponds full of Cyperus papyrus, Cyprus trees and Oleander and rosemary bushes. The Oleander look splendid growing on the Island in the N1 where they never get any water. I notice that the darker the flowers, the more compact its growth habit. I think its actually illegal to plant them these days, but they root so easily from hastily snatched branches. They look good with the common pale Hibiscus as you can see above in this a ‘neglected’  road side planting in Constantia with dark pink Oleander left. 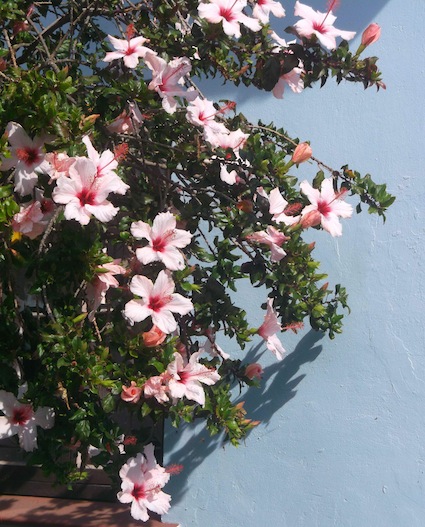 The flowering garden xeriscape that doesn't look like one 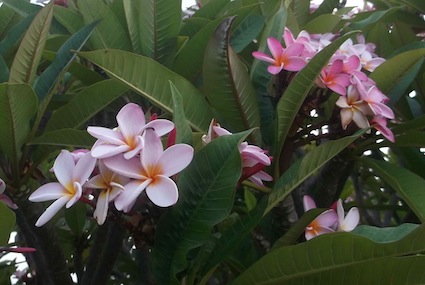 A pink plumeria, or franjipani variety

The plants to put a pink glow in your late summer garden are all plants of this ilk, tough drought resistant, and hence, rather frequently used in  South African, and rather ordinary. Nonetheless they are lovely and I am sure can be combined well. I’ve a pink flowered smallish tree, Hibiscus. There are many cultivars of different shades and forms which do well and thrive on neglect. This particular one is also used as a ‘highway planting’. As can be seen here they line Milner Road for about a kilometer. As far as I know the Hibiscus is not invasive. 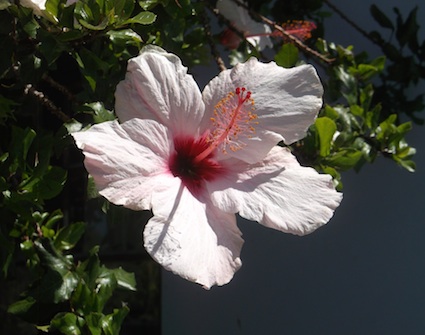 I’ve small pink flowered bedding plants Bizzie Lizzies, those easy to root old faithfulls, but this one my mother grew from a seed off her deep pink, red stalked favourite. As you can see its not true to type but it has this varied pink colour, flushing darker in the middle. They aren't Xeriscape plants, you can see them bending in the hea in his picture, but can be planted in an irrigated garden zone. 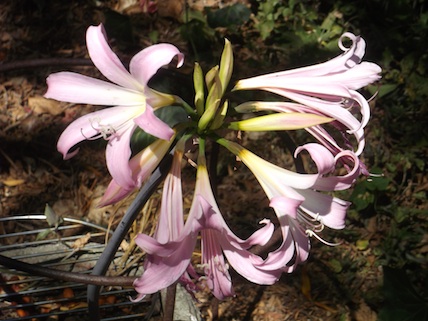 For height there is also the dark pink and spindly Gaura, below, which is flowering now, as is the indigenous pink lily, Amaryllis belladonna (also poisonous), above. 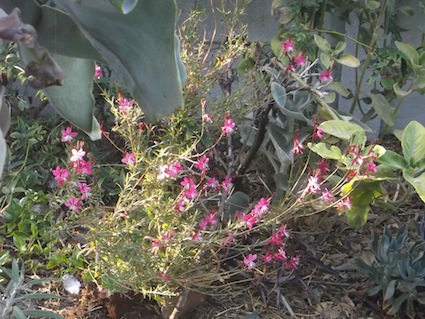 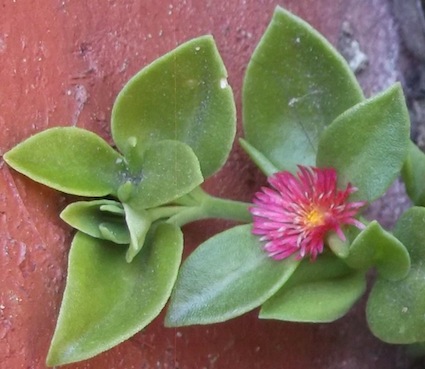 A sweet addition to the flowering garden is a flower starred lawn. As a garden carpeting and lawn replacement there is the lush green Dorotheanthus, which has tiny deep electric pink flowers. 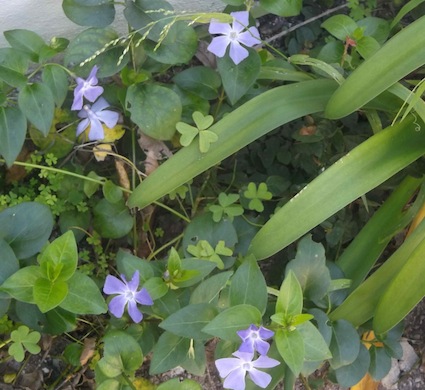 There are probably many more flowers a little less ‘common’ than the ones I’ve chosen for the flowering garden for late summer. But the two large shrubs, I've mentioned,  the flat, small, large and tiny flowered, and tall bedding plants could lay the basis of a corner in your garden that bursts into pink bloom when all else is shriveling and recalcitrant. 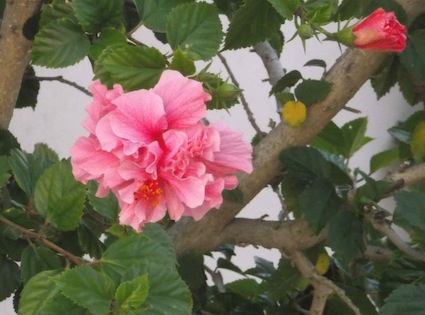 I want to add one more unusual, rather wonderful tree for the large element of pinkness. It is growing in our neighbourhood, with its deep sand, and flourishing, though now waning a little from its full bloom. It flowers for weeks and weeks. I have seen it becoming extremely large in wetter areas with clay. It is the pink flame tree or Brachychiton. With this exquisite tree and its golden velvet pods, we have a complete pink palette, or scala for the pink flushed late summer garden. 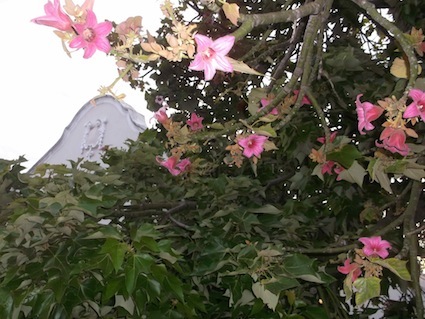 gardens of a deeper greenness