A protea drawing on floral fabric and prints 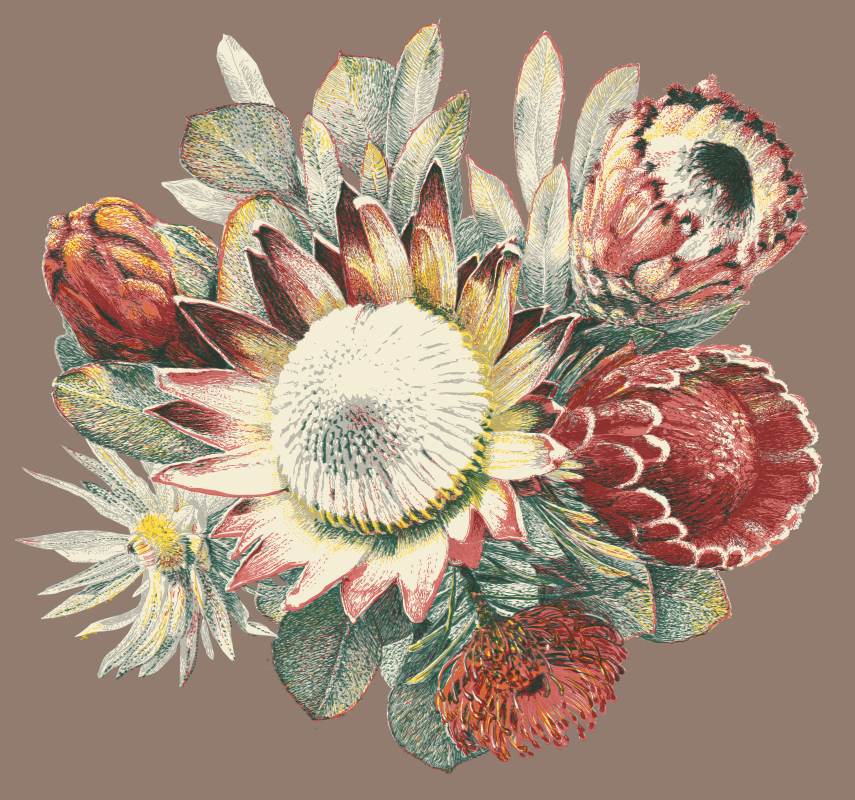 Protea drawing for upholstery and other prints

Proteas are found elsewhere in Africa and they have relatives in Australia, but they have come to stand for the Western Cape of South Africa, for Fynbos, as they grow here in many forms and were once abundant.

Which proteas are found in the protea drawing ?

You can buy this design in whichever form you choose, here. The proteas in the drawing are the large open formed king protea, Protea cynaroides, on which I have written before. The reddish proteas are the bearded P. magnifica, the closed egg shape of P. grandiceps, and the pure red Venus, a horticultural hybrid between P. aristata and P. repens bred by Pam Michell in the Banhoek valley outside Stellenbosch. The pincushion is Leucospermum cordifolium, and the rosette of silver leaves with a small yellow flower at the center is the flower of the silver tree, Leucondendron argenteum, which is highly endangered in the wild. All of these proteas are common horticultural plants in South Africa.

A little information on the proteas

Protea repens, one of the elements in the Venus cross, which you can see on the right of the protea drawing, is also known as the sugar bush. It bears a lot of nectar, fed on by sugarbirds, and this used to be collected and boiled down to make bossies-stroop or bush syrup as an element of historical Cape medicine. The other contributor, P. aristata has needle like leaves and dark pink blooms, and has come close to extinction. It disappeared for almost half a century.

P. magnifica, also known as the queen protea, has the second largest bloom. The king is the largest. The queen's coloring is incredibly varied, from whitish to pale green through pink to dark carmine. This queen has a woolly beard ! The bracts have woolly edges which may be white, golden brown or purply black. Similarly the woolly centre may be white, brown or black. The outer wool color on the bracts need not be the same as that in the center, giving rise to a lot of visual variation.

The protea with the closed form and broad leaves on the left, P. grandiceps, has marginal endangered status. It is also known as the princess protea. The bush is stocky and very slow growing and pollinated by sunbirds and sugarbirds, like many of the proteas.

I created this protea drawing in several colors to be printed as a repeat on upholstery fabric in about 1998. This is the reason for the muted colors which are on the grey side of natural. I thought that South African flowers depicted in florals could replace the use of Eurasian floral fabrics like Sanderson and chintz.

This has eventually happened to a degree. Proteas became trendy and then almost mainstream on cushions and décor items. But when I started there was no market for such things. South Africans then had little taste for our own flora in the form of florals. Twenty two years have gone by and a market has formed. I guess the tourism industry which exploded in 1994 helped as the visitors wanted to see something more uniquely and typically South African, and then South Africans followed suit, after the rest, as usual. The trouble with tourism is you can delight different people with the same local attractions again and again and again. It does not really make a market that diverse. So beyond the big five of our flowers, the rest get no attention at all.

home page with links to all the topics I've written on relating to natural, permacultural and regenerative gardening