A wild adventure in the Cape Flats Nature Reserve 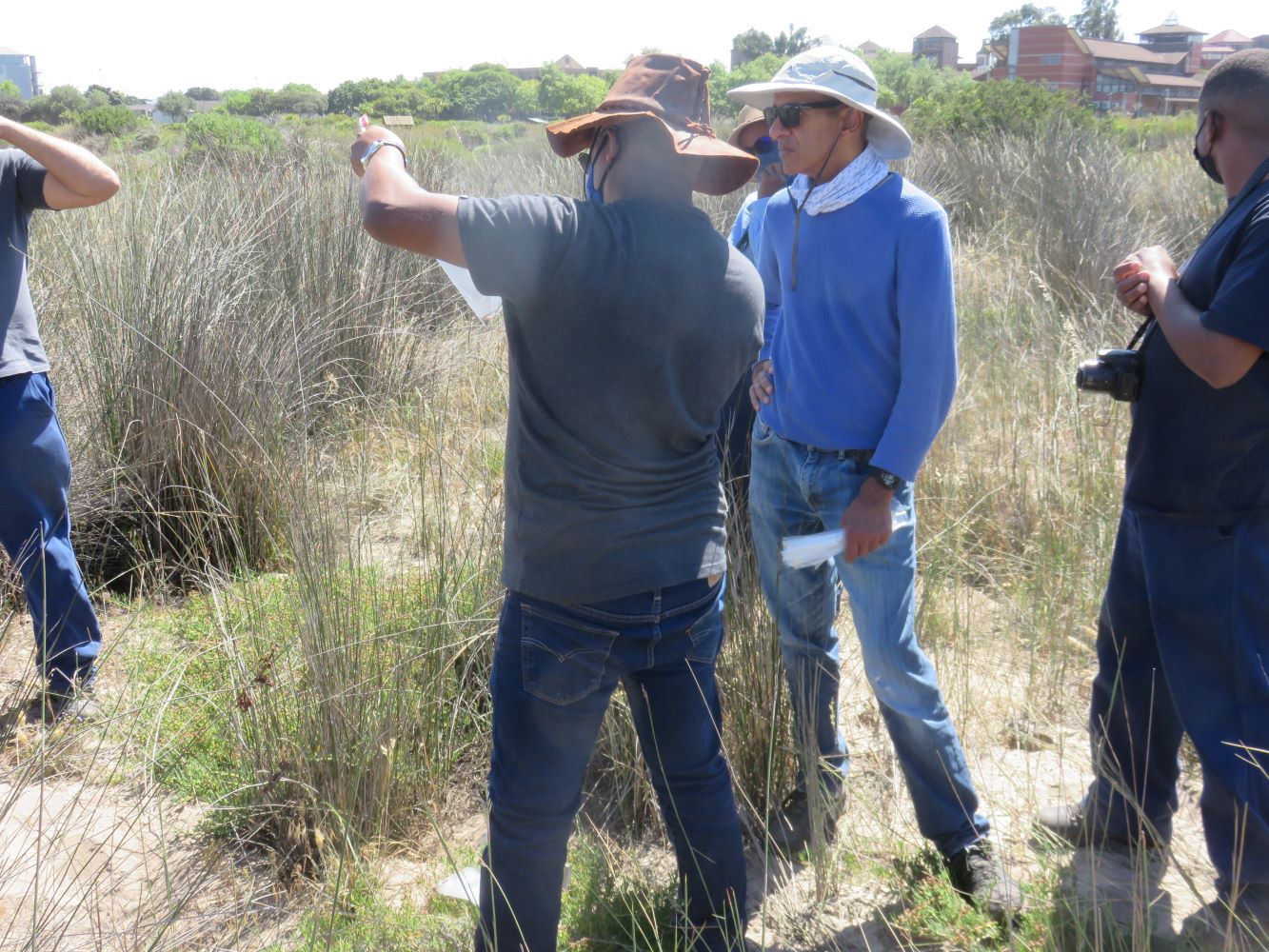 A few weeks back my ecologically minded friend Riyaaz Ismail posted in a chat group about the annual faunal survey at the Cape Flats Nature Reserve at UWC. It is usually open to the public and attended by droves of citizen scientists, but this year a damper was cast on the events by the lockdown regulations for COVID 19. The multi dimensional survey was going ahead nonetheless, as a yearly survey of the reserve is a necessity. I hoped desperately to be involved as I've an interest in wildlife friendly gardening, a craze sweeping the UK at present, and I'm still at the beginning of a long learning journey regarding our small wildlife. I think there is no parallel 'movement' in South Africa doing this, not explicitly expressed anyway, except the NPO Communitree, whose mission is building stepping stone corridors for insects to pass along. I was hoping to learn about insects at UWC, but learned something else instead, something quite unexpected and delightful. 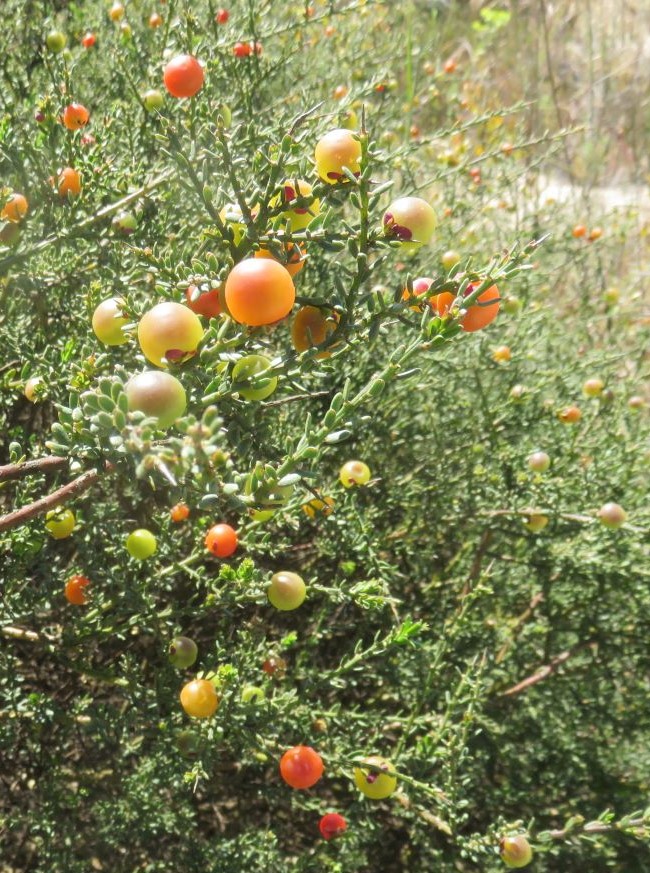 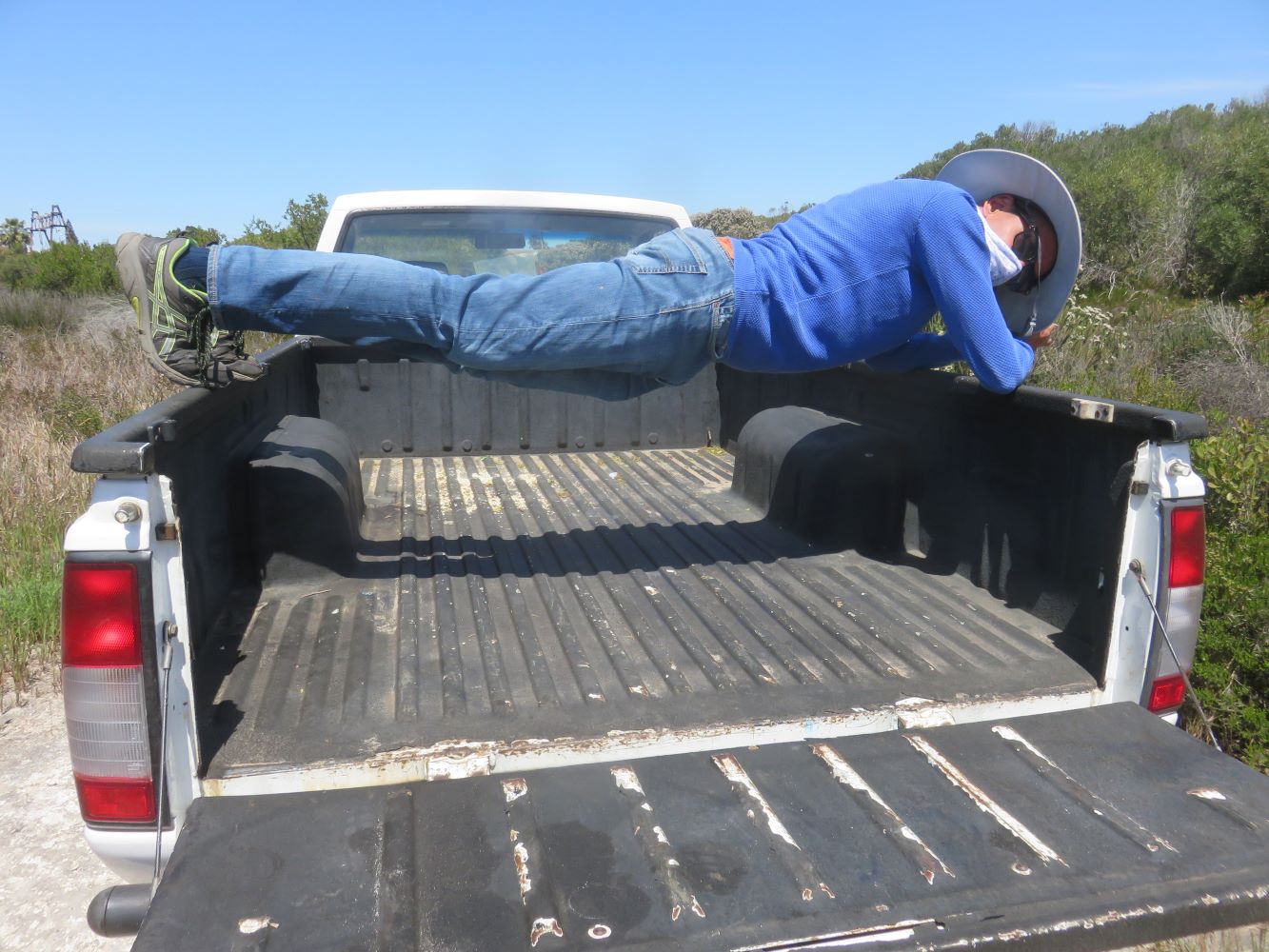 The first thing we did was check the small mammal traps. They look just like live box traps for mice and they were baited with oats and peanut butter. The doors of the traps are set open, so if they are closed it is immediately apparent that something that triggered the trap is inside. They then upend the trap into a plastic bag so that they can see the animals without handling them too much or getting bitten. First there was one small striped field mouse, then two babies, probably siblings. The scientist explained to us how to tell the difference between male and female juveniles by the distance between their body apertures (longer in the male) and the lack of hair (female). Then an adult female was found. She was brushed gently with a toothbrush to test whether she had mites or fleas. They must be brushed very gently as they have very thin skin. The female was pretty clean of parasites, showing her immune system was healthy. Then a large male with enormous gonads for such a small creature was found. We were told that testosterone lowers immunity and the males often are more plagued by pests. Indeed, that male and the subsequent male rodents even had jiggers, or fleas which dig into the skin and remain there. I was thinking the poor animals must be living a life of hell like that, but apparently it doesn't bother them much and they just go on with life, running about and procreating. The presence of parasites does allow the scientists to assess the overall health of the population, however, as a compromised individual will have more parasites. After their little delicate brushing, and being turned on their backs and surrounded by curious humans, the rodents are let out of the bag, and disappear in a flash into the grass though one of the babies didn't seem to want to go and hung onto the plastic bag for dear life till it fell off and ran away. 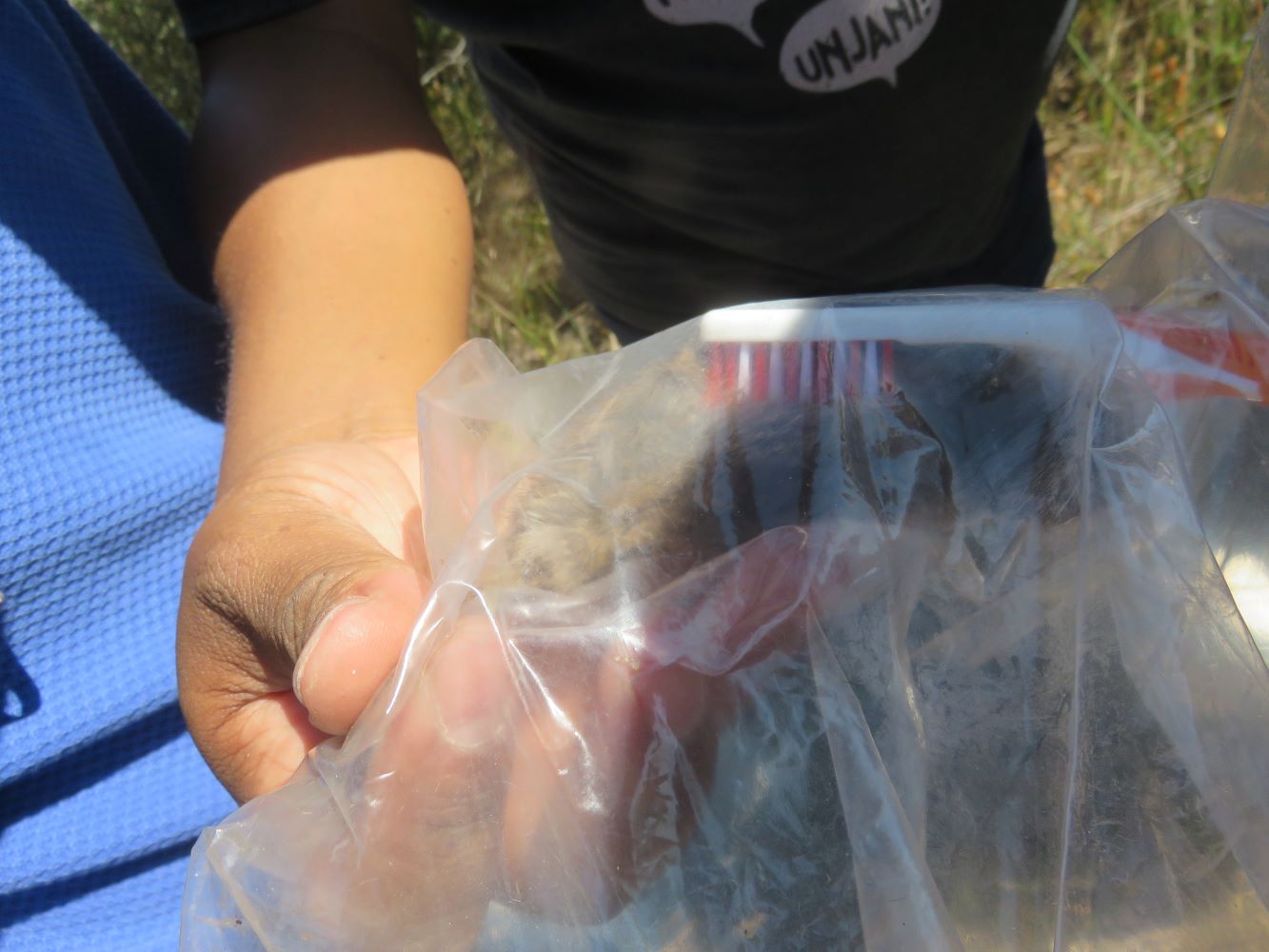 Gently combing the mice with a toothbrush reveals how many parasites they carry.

The next few traps contained creatures I never knew existed at the Cape, much to my shame. We found several large eyed and rather adorably cute Cape gerbils. As large as a small guinea pig, or hamster, they are not found anywhere else in Africa. According to Tony Rebello a botanist in South Africa, they can become so numerous eating alien Port Jacksons seeds, that when the aliens are cleared they devour nearly everything that comes up and threaten fynbos restoration projects. 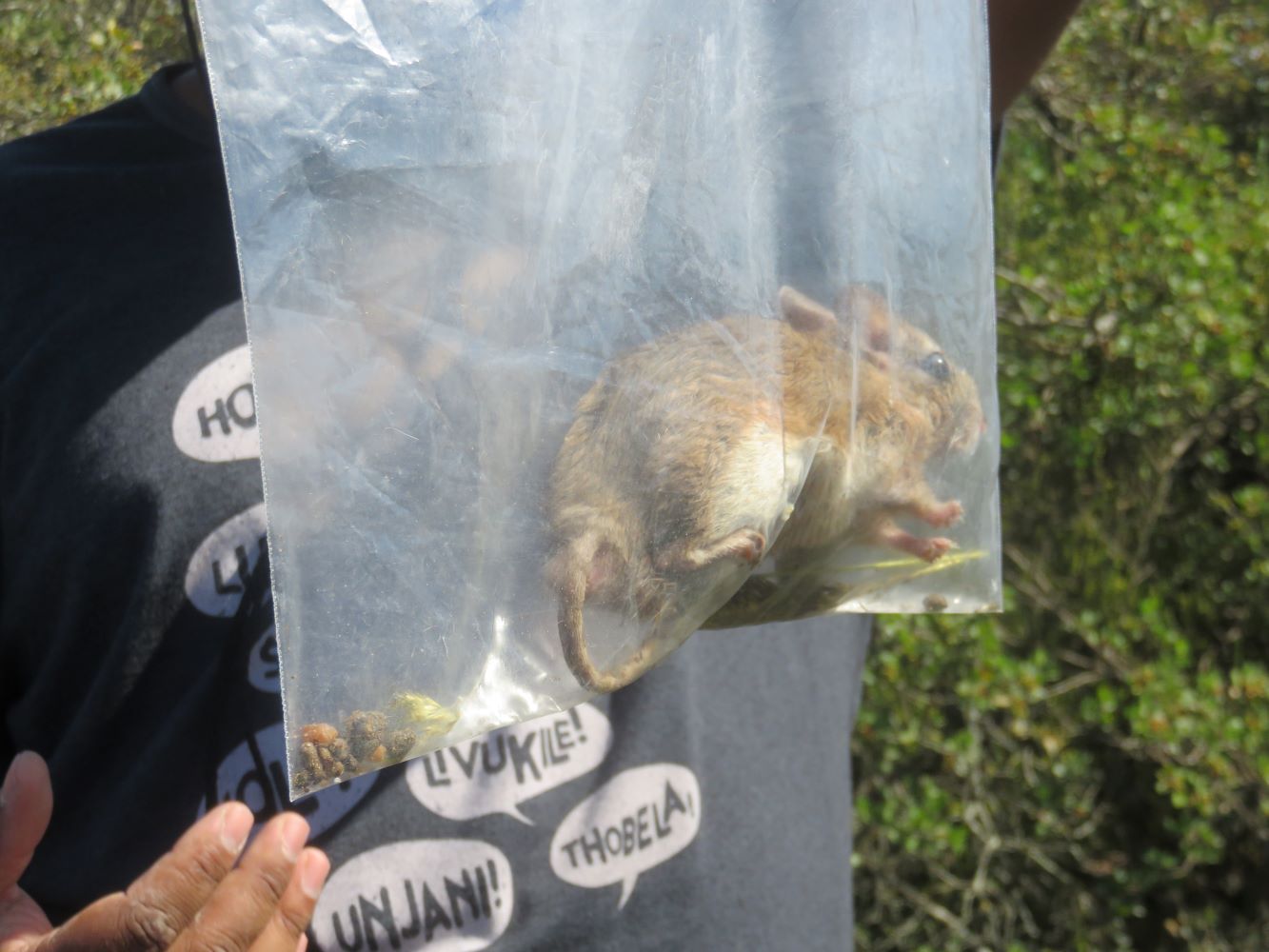 The gerbils always run along the same track, making a round, smooth tunnel in the grass which other rodents use. They dig numerous tunnels in the ground and walking in the reserve is full of invisible traps into which one plunges knee deep as the soil gives away suddenly and without warning because of the work of the gerbils and the mole rats. However, natural management seems to be occurring in that caracals frequent the reserve and devour vast quantities of rodents, in addition to the occasional cat. The removal or deterrent effect on cats has seen the resurgence of birds and rodent diversity in the reserve. We were told that caracals roam through the suburbs at will, hunting what they can, and they can jump six foot fences. However they are very shy nocturnal hunters and you're unlikely to see anything but footprints or scat. 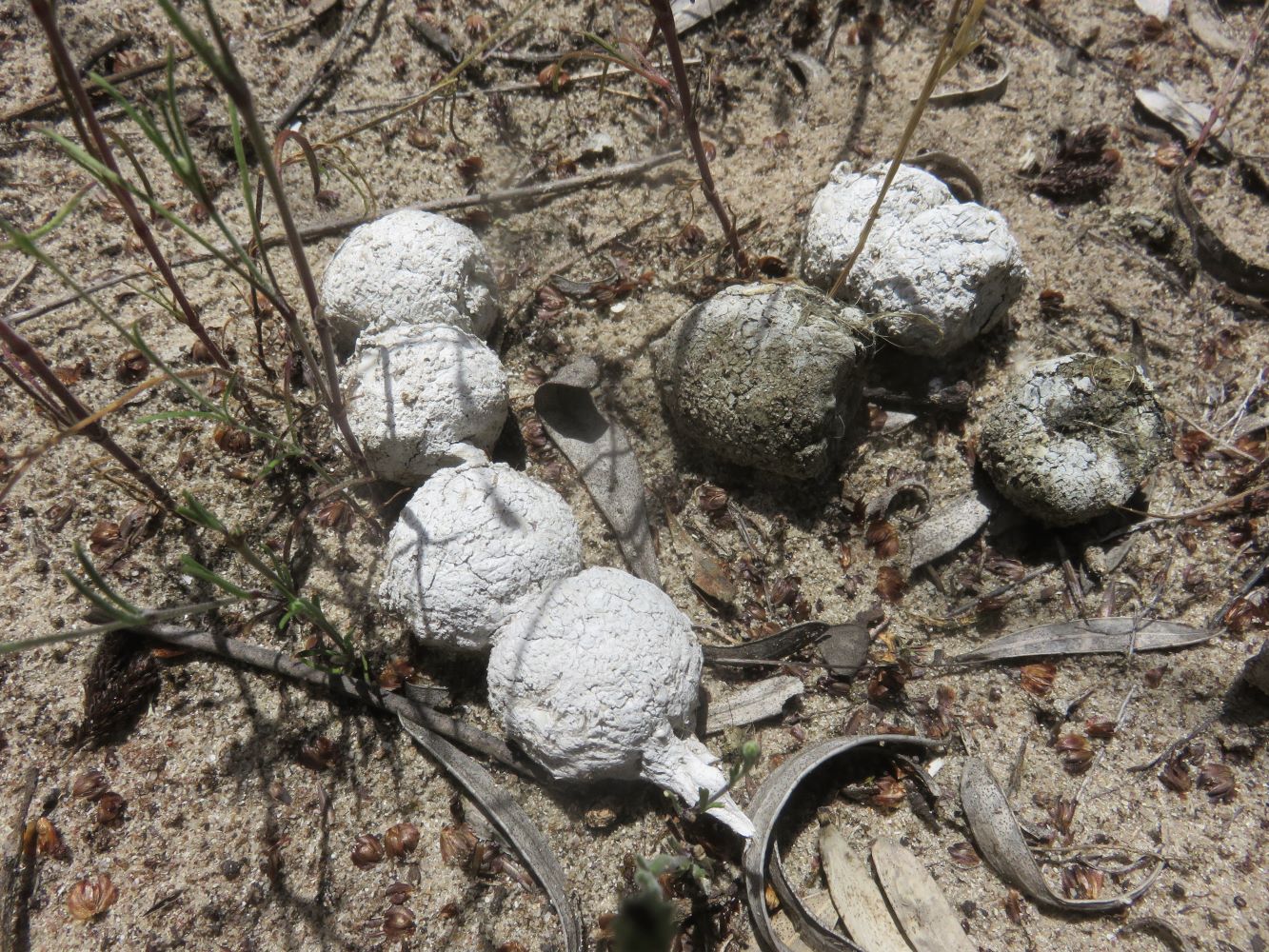 The white color of caracal scat shows they are eating a lot of animal bones. The scat is also full of wads of animal hair from gerbils, field mice, and the occasional domestic cat.

We saw their scat frequently in the reserve and it was full of hair and bone. I have seen a caracal face to face long ago on a hot afternoon in the forest on Table Mountain. On this day I learned how lucky I had been to see one in daylight. I remember the cat's piercing cold yellow eyes and hyper muscular frame as it came to within two meters of me and began to circle around sniffing the air. I was being assessed, and when I got scared and stood up, it turned and walked slowly away, not intimidated at all, but dismissively scratching me off the fast food list. 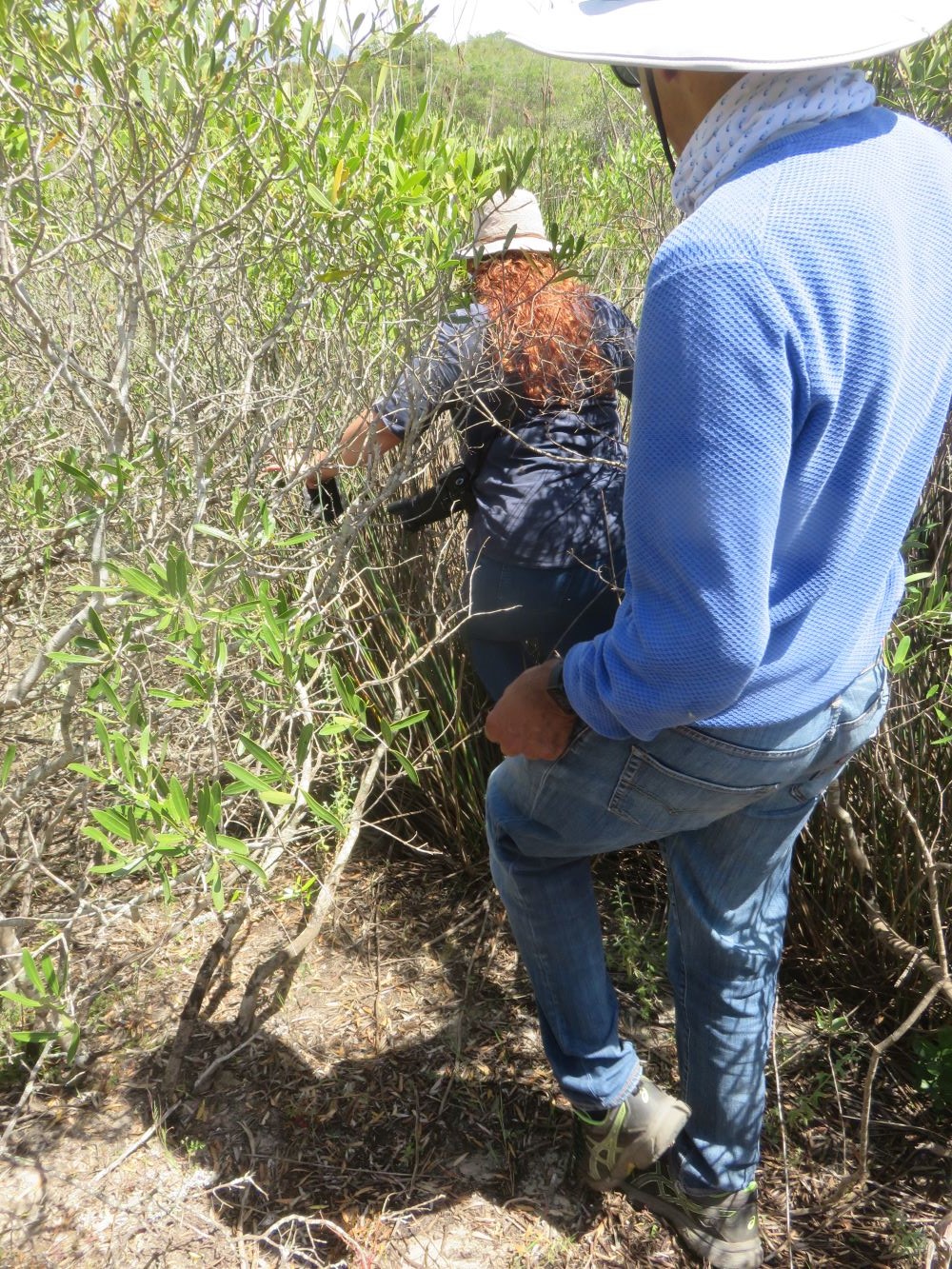 Riyaaz follows the disappearing Laurenda van Breda as we bundu-bash (walk on areas where there is no path) on an inspection of rarely visited areas of the reserve.

However, and this is a lesson for us all. Insect population and diversity have increased since the stopping of herbicide usage in the reserve over a decade ago. Large cross-sections of recovering vegetation still remain on the dunes after permits for controlled burns were declined nearly two decades ago. The evidence of this decision is still seen on aerial photographs. So don't spray anything. We do not fully understand how destructive herbicides are, especially in our threatened and fragmented Cape Flats vegetation. 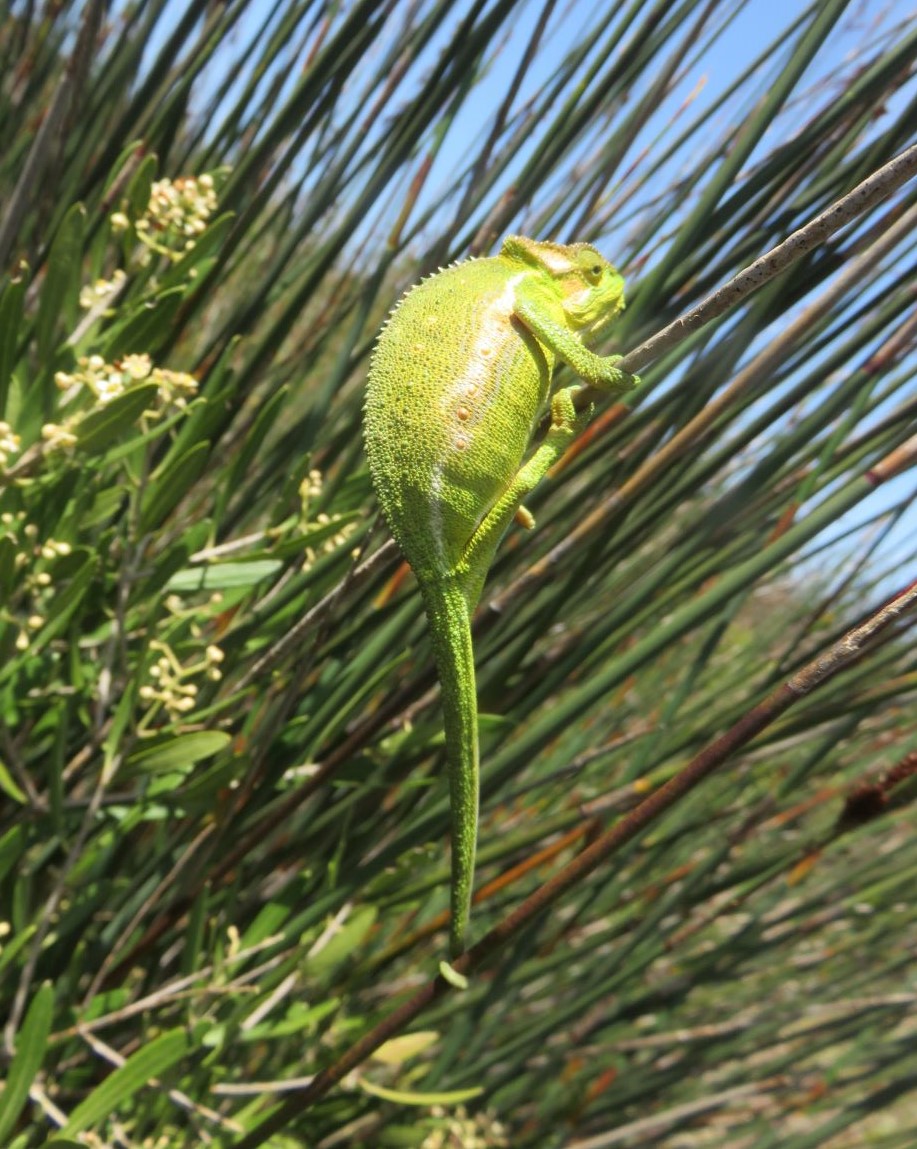 This lovely chameleon is a sign of recovering diversity.

The reserve is slowly healing from the ecological onslaught on its integrity and this place holds a beautiful story of recovery and resilience. It is home to hundreds of plant and animal species, a fabulous gene pool of what is left of our globally acknowledged botanical diversity. What is not widely proclaimed is the diversity of arthropods, and the unique soil flora supported by the biome. There is very little lowland Fynbos left, the Cape Flats Sand Fynbos specifically having less than 1% formally protected, so this reserve is vital to biodiversity in the future. I was very excited to see everything growing there as the place I live was once covered in similar vegetation, and this mix of Cape Flats Dune Strandveld and Cape Flats Sand Fynbos is its potential vegetation and could help guide future restoration. 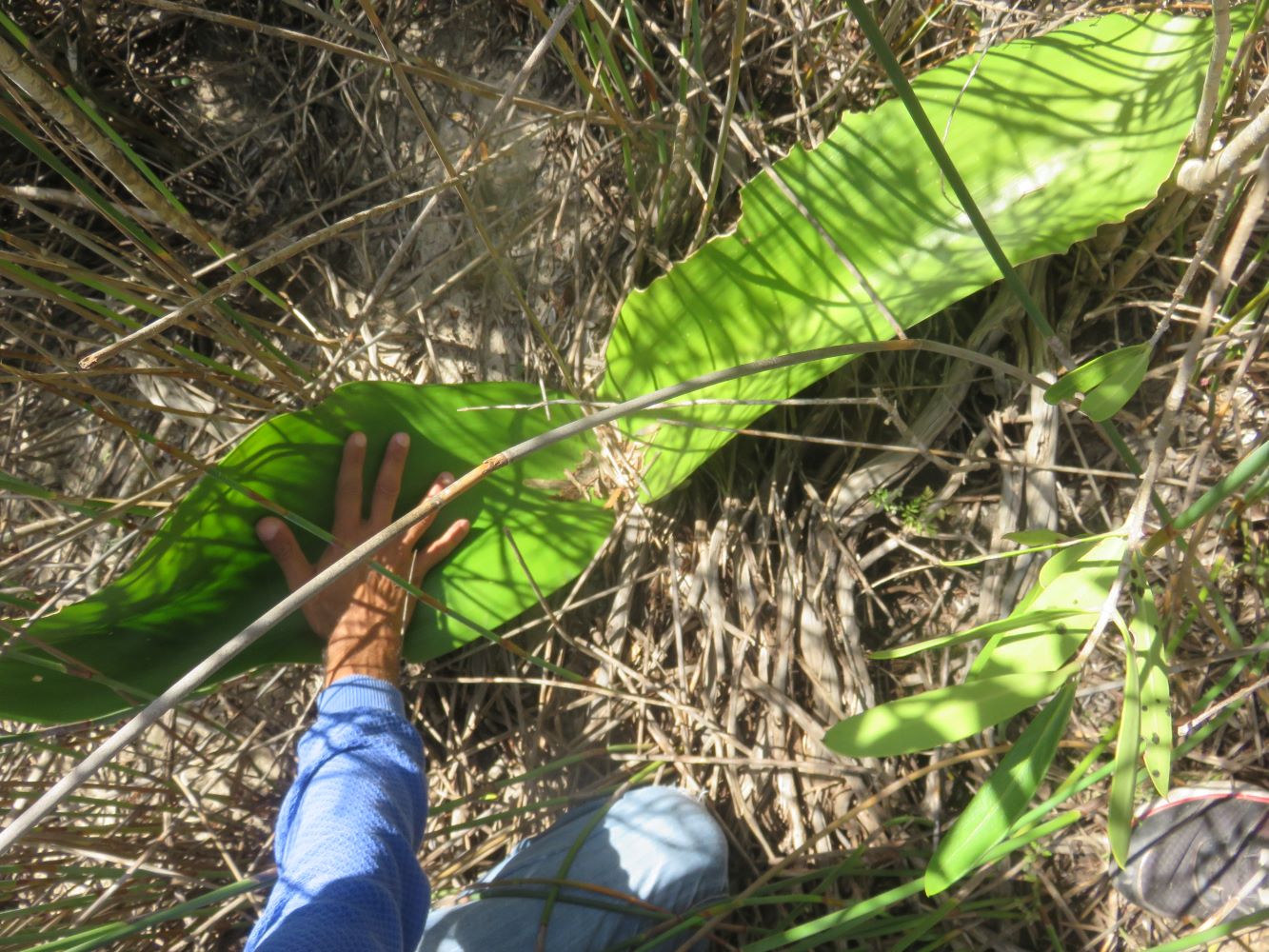 The leaves of a decades old Haemanthus bulb.

home page for links to 300 articles on natural gardening

wildlife gardening and what it can do for the planet

video of the inspection of small mammal traps

A trip up the west coast.

Hi Caroline It was an honour to accompany you to this faunal and floral survey. We should do more or perhaps we can facilitate that you speak at workshops …