Snail predators and the garden ecosystem 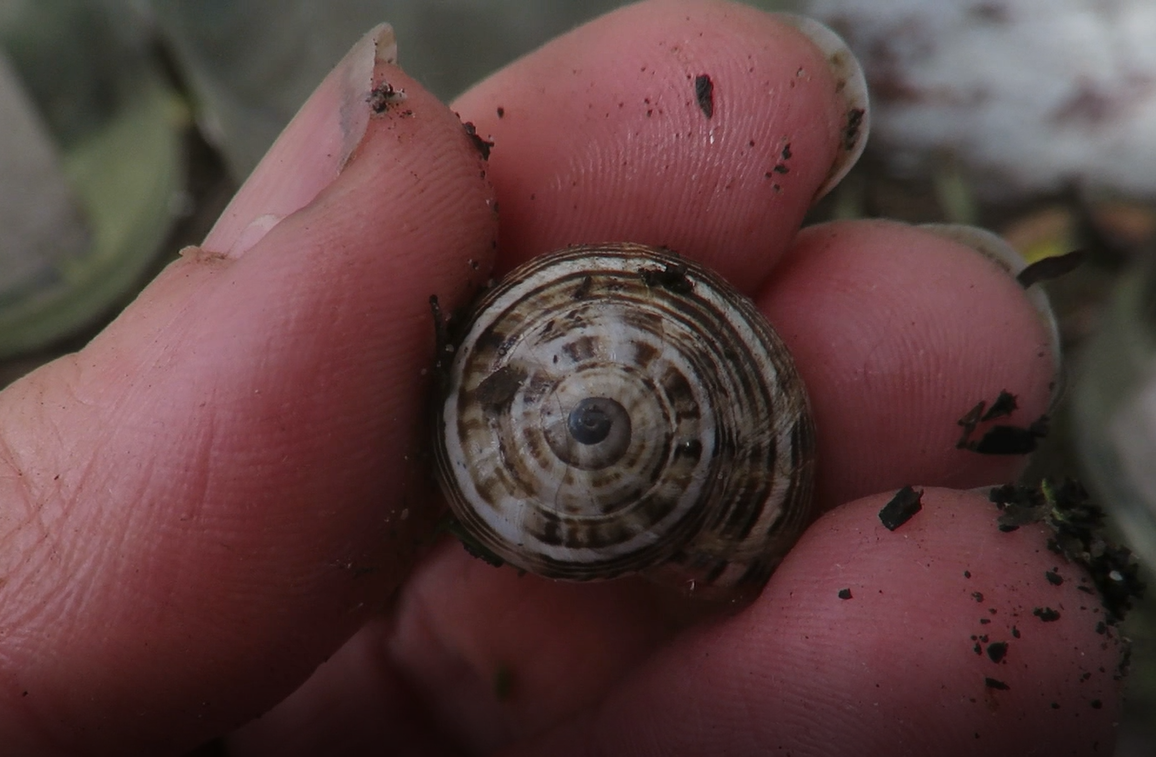 There are many snail predators, as can be expected given their phenomenal rate of reproduction, and their relative defenselessness. Humans all around the world, and a wide range of animals from all the land vertebrate groups to invertebrates like other snails, all use them as a source of food.

Snails really do help form a base for the terrestrial food chain and support a great diversity of other life. They eat mainly moist leaf litter, fungi and soil, because their shell building requires a high Calcium intake, and they eat plants of course. Other animals requiring Calcium in their diet then feed on the snails. Nesting birds need Calcium to form eggshells and embryos. For example, a wild turkeys' consumption of snails increases by 40% during the egg laying season.

Some birds produce very thin skinned non viable eggs if the snail population is not adequate for their needs. Others delay laying until they have accumulated enough calcium. Both of these factors impact bird numbers negatively. Some snails actually use birds to spread to new terrain. About 16% of certain small species can survive passing through the  bird's gut. This allows them to move faster than they are capable without the bird's help. It's air travel for snails.

In the northern hemisphere garden snails are devoured by ground foraging birds such as thrushes, grouse and blackbirds. Other birds which eat snails if they are small enough to swallow whole are song birds like bluebirds, thrushes, starlings and robins. Larger birds just consume them whole: wild turkeys, blue jays, crows, magpies, ravens and other corvids, hawks, owls, blue and green herons enjoy snails, as do many kinds of ducks. A few birds such as song thrushes are able to break snails open by smashing them on rocks. Other snail eating specialists like snail kites can pull out the flesh from the shell with their long hooked beak.

Other snail predators are small mammals such as hedgehogs, chipmunks, shrews, mice and squirrels, lizards, snakes like slow worms and Pareas snakes, box turtles, toads, salamanders, ground beetles, millipedes, flies, nematodes, leeches, decollate snails, glow worm larvae, some of which feed only on snails, some flatworms such as Platydemus manokwari and caterpillars such as Hyposmocoma molluscivora. Some of these snail eaters then provide food for foxes, larger snakes, bears and hawks.

The leading global authority in the English speaking world on snail predators seems to be G.M. Barker. He has written a book called the Natural Enemies of Terrestrial Molluscs, and a paper on molluscs which feed on other molluscs, to which there is a link below. 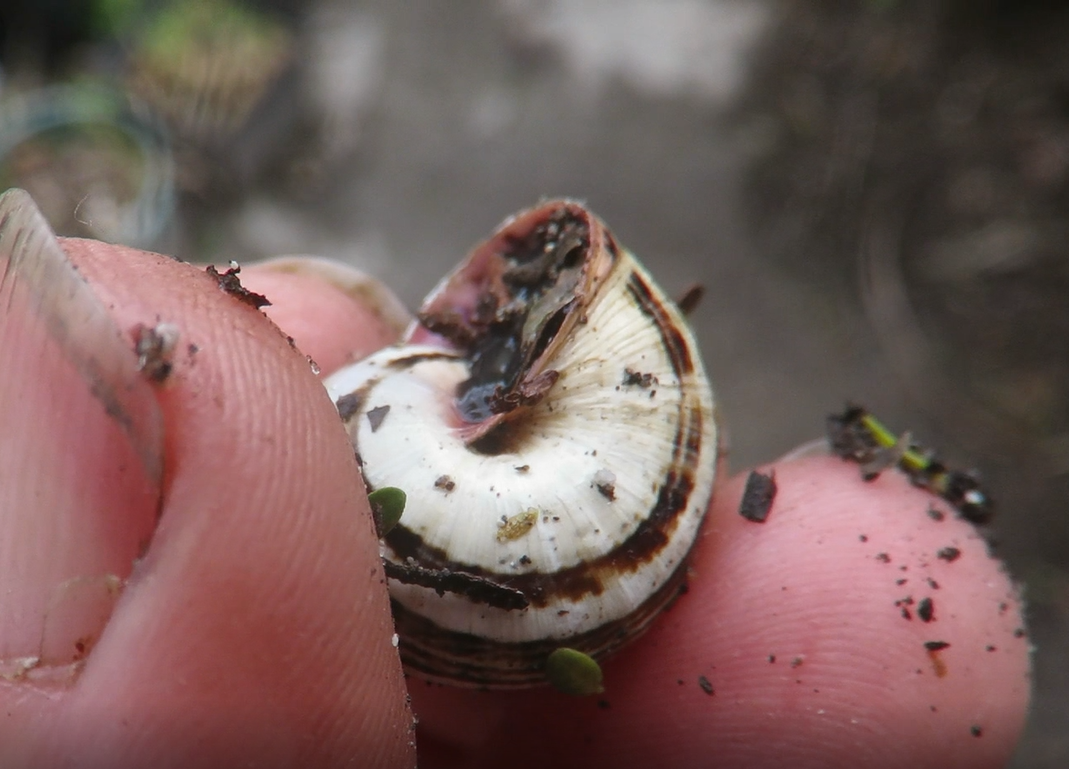 When snail-predators are snail predators

Some of the most surprising snail predators are other snails. Cannibalism is quite common, in that snail hatchlings may eat their unhatched siblings, and snails may feed on their dead kin. Another benefit of snails is that some snails feed on the eggs of other pests, reducing their numbers.

Snails which hunt down and kill other living snails are less common, but still quite diverse. I suggest you google the predatory snails in your area to find out more. It is highly likely that you have a couple. We have three in the Western Cape. In Florida the best known is the rosy wolfsnail Euglandina rosea, in the Mediterranean there is Rumina decollata, used in California against the brown garden snail Cornu aspersum.

Our snail pests in in South Africa are Helix aspersa (the common and edible garden snail), Theba pisana (the dune snail) and Cochlicella barbara (coastal cone snail). The carnivorous snails which hunt these and other snails are Nata dumeticola and Nata vernicosa which are flatter, yellower, with a characteristic umbilicus on the underside. Exotics snails are easy prey for these hunters. You can see a detailed article on them under 'garden snails'. According to Charles and Julia Botha (page 33) they can virtually clear the garden of snails but it takes a long time and they need to have food (other snails) while their population increases. If you reach this stage, immediately catch as many as you can and give them to friends, before they start consuming each other. 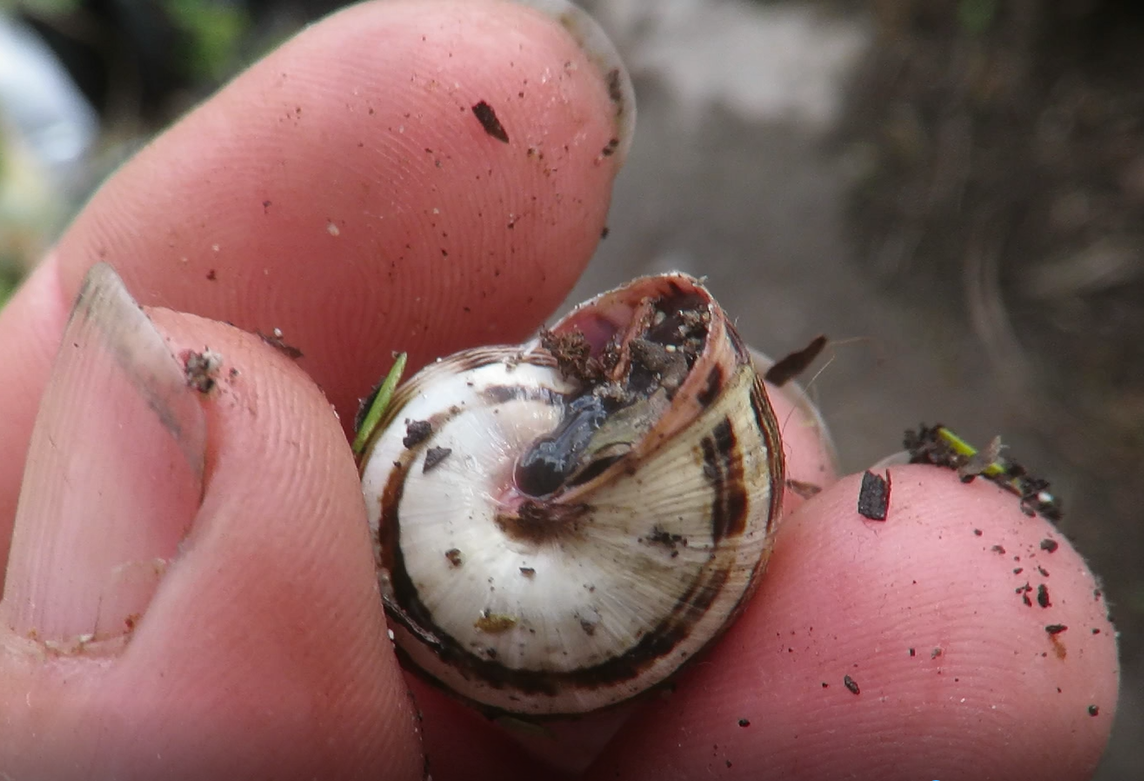 In South Africa we of course have plenty of other snail predators. Snails will supplement the diet of laying mother birds, and feed a wide a variety of other animals. We also have a snail eating snake, the common slug eater, a small copper coloured snake, which is also great at getting rid of snails. It pulls them out of their shells by their noses and devours them.

To protect themselves, snails retract into their shells or bury themselves in the ground when they are resting. But this will not help for the many parasites that also live on their flesh. The marsh snail Succinea putris is parasitized by the flatworm Leucochloridium paradoxum, entering through the eye stalks, which become enlarged. Birds peck at the enlarged eyes and also become hosts. Snails carry many parasites, including some which can infect humans, and when using them as food it is necessary to clean their gut of wild food and cook them thoroughly.

Snails as an ecological indicator

As we have seen, in a previous article on snails and soil health, tilled land will have fewer snails, not just because of biocides, but because agricultural land is frequently disturbed and much less able to hold moisture. With the loss of abundance and diversity of beneficial snails on farmland we often see a surge in pest numbers. On the one hand plant cover is simplified in monocultures, favoring the food preferences of pests. But the lack of gastropods also leads to a decline in beneficial predators and competitors for the pests.

Thus we can see that snails are an indicator of ecosystem health, and other articles will expand on this beneficial trait of snails. A heavy infestation of snails can indicate too much interference with the garden ecosystem. Cleaning the garden too thoroughly can mean that there is no shelter for snail predators, like beneficial insects and small mammals and one may have snail population explosions if one has a very clean garden and tender juicy vegetables. A lack of snails is also a sign of severe problems, a depletion of soil organic matter and plant cover that they cannot survive. This type of landscape depletion is negative for all aspects of garden ecology, from soil microbes and fertility, to water retention and diversity. 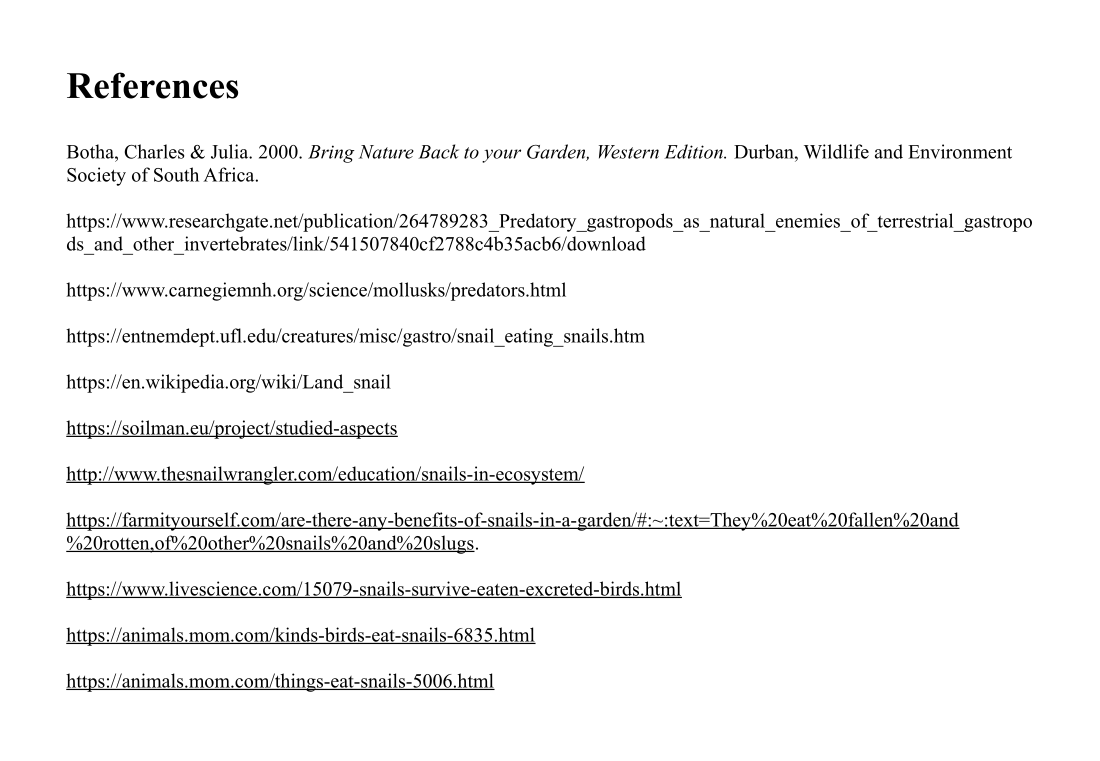 home page for links to all my other articles on natural, native, organic, permacultural and regenerative gardening ideas and practice.