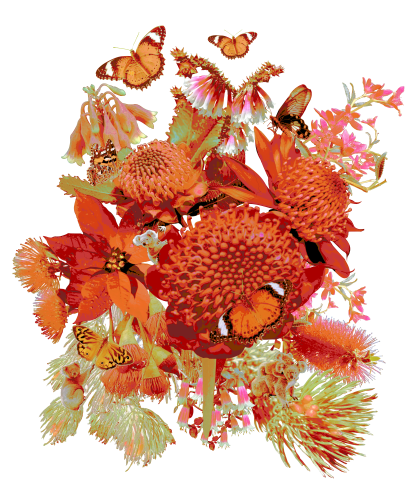 Australian Christmas flowers, butterflies, and tiny koala bears are part of this design, and you can buy it

I'm not a native, so perhaps more easily take a little license in the colors and scale of some elements. It is impossible not to fall in love with this extraordinary flora, sister to our own Fynbos from ancient Gondwanaland. Perhaps a new love made the design so red, perhaps Christmas colour, or fire, a reminder of threatened ecosystems worldwide. One version is fire coloured, the other more natural. The design is dedicated to the miracle of Australian flowers, and to sisters and friends who share a passion for gardening but can't be together this Christmas.

How this Australian Christmas flowers design was made

I describe my process in case it helps other designers. It may also help an impoverished designer find a way of working at no cost. I will philosophize a bit about perception and what makes a repeat pattern interesting. In addition, because of my experience I also want to include a lesson for the more visually naive. I consider myself a naive artist. I've some schooling but I don't talk the theory talk of an art graduate, and I don't have the same preoccupations. It will be worth reading, I promise, you may learn something well worth learning from another naive !

You don't do this kind of photographic adaption with the flick of a switch. It is as much work as creating an oil painting. Actually, I'm quicker with oils. You can see my most recent painting here. What makes something effortful does not depend on using old fashioned time tested materials like canvas, crushed rock and plant oils, and I say this with not a little resentment.... built up over decades of selling screen print designs which also employ 'tech'.

First I had to search for quite a long time for available photographs of Australian Christmas flowers. This type of search, to find the flowers in just the right position required for the design, and not cut by other things in the photograph, and of sufficient resolution, can take a lot longer than one expects. Many days actually.

I use freeware called Inkscape. I uploaded the chosen images to Inkscape, and did a rough cut around each flower with a beziere tool and the clip function that took many many hours. Then I could move the parts around and see their form relative to the other forms, and where there was empty space.

Once I had arranged them I did a fine cut. The fine cutting work, around every stamen and proboscis in the design, took about a month. After completion the design was full of holes that didn't work, so more tweaking was needed. When I was satisfied with the preliminary placement I had to make sure the edges would work.

This is how one is supposed to make a seamless repeat pattern. I duplicated the flowers which overlapped the margin of the design page and placed them on the opposite side in exactly the same position they would appear in a repeat by typing in the right numbers on the x and y axis. After that I rearranged the edges of the design again to get a nice flow between the repeat blocks across the edges. I fiddled with this for a few days. When it was relatively satisfying, I grouped all the elements, setting them in position and then cut the square repeat block out of the design. This was the only operation which took only a few seconds. I exported the vector file to png and uploaded it to Redbubble and applied the repeat pattern instruction. It was a good 5 weeks after starting that I finally saw my design displayed as intended. Yaheeeeee !

However, I discovered that there were white track marks or relatively open 'roads' along the edges of the design horizontally and vertically ! This was the big learning moment for me. I will not use a motif in the same way again, dense in the middle and thin around the edge. It lends itself to making an obvious grid of thinner areas in repeat that is largely unavoidable.

I also see now that smaller motifs, at the very least two, rather than one big one, will mean that lower scale repetition confuses the eye a little and the repeat block is less glaringly blatant. This concealed repetition is a stimulating visual puzzle that intrigues the eye. From what I've read on perception (for an abandoned art thesis once), this is possible. Our eye can be intrigued by an anomaly without us being conscious of it. Concealment creates a problem for the visual perceptive apparatus to solve. We experience it consciously as a slight arousal, or pleasure in looking at something. When there are no problems for our perceptive apparatus to solve we experience something more like boredom when looking. Monotony doesn't 'reward' our cognition.

Mirrored and rotated objects, and lines of energy that reverse within the design, which one sees so commonly in repeat designs, also serve to bamboozle the eye a little and keep it exploring the design. Or rather they serve to change the repeat from a a structure that traps the design statically to something in which each repetition is different, changing the design from one thing to another and making repetition a creator of interest rather than monotony. Our perception wants to solve the problem of why there is something different, or why the 'rule' has been broken. But once again, it is an illusion, as the changes occur between smaller repeated elements within one block not between blocks, as the repeat blocks generated digitally are identical.

I couldn't thin the central posy and scatter the plants evenly without completely shattering my original vision which I wanted to keep. I think the bunched flowers create a feeling of abundance and even opulence, and that is what I wanted to say about Australia's wonderful flora and wildlife. Scattered and spaced out would look thin, like samples or specimens in a cabinet rather than explosions of diversity. I'm not ready for the sadness of the specimens in a museum yet.

Anyway, the track marks in the horizontal were worse, so I filled one of the largest white areas with a big butterfly at the corner of the repeat block. I shuffled other elements around, which required going back to earlier stages and then redoing the clip. This all helped a little and I have learned from doing this as stated above and will design repeats differently in future.

After getting all the elements in place I attacked the color. I wanted to posterize, or divide the color into a number of flat colors rather than have it looking natural or like a photograph with continuous tone. I wanted it to look painterly, and a bit more edgy (with edges !) and yet in contradiction, to subdue the color in the leaves into closer harmony with the red flowers to be more typically fabric like. I may have overdone this in some versions.

I tried automatic posterizing and color separation, but it was not at all what I'd hoped for. Therefore I had to do individual traces which produce flat color. I did this at various levels of sensitivity one by one to separate the jumps in tone that I wanted. This didn't work at first. The program does not allow this order of work, to do a trace over something cut with a beziere tool outline, so I had to turn it into a png, and then re-upload it to the design program to do a trace. It may have to do with vector and bitmap file formats. A cut image becomes an svg or vector file, and you can't do a trace of a vector file, only of a bitmap. After re-uploading the tracing worked on the whole composite design which was now a bitmap unit. I did eight levels of flat color. I do wish Inkscape had more color choices. I'll have to find some color swatch freeware that is compatible some time, but they tend to be for pros and cost a lot.

I decided to have one design keeping the photograph underneath (the bluish pink design) and one without (the flame colors). The lack of background means that the white areas in the flame color design are empty, and the background comes through. I like it as it makes the flowers even more abstract and the drawing transparent.

Then as I had cut off the margins of the design right through the middle of flowers and butterflies to make the repeat, I had to go back to a pre-clip stage to make the design for the tshirt, which needed whole objects around the edges. Then I redid all the traces for the posterizing of the tshirt, which is why the tshirt is different, a blend of the two color variations I mentioned.

After that I started on Redbubble again and worked with colors and sizing and positioning and a lot of uploading of different images like rotated versions and the non repeating tshirt version. After about 8 hours I was ready to publish and hope that this Australian Christmas flowers design will find favor.

home page with links to all the topics I've written on relating to natural, permacultural and regenerative gardening